Old allies turn tough: How the EU will react to Theresa May's request for a Brexit extension
Comment of the Day

Old allies turn tough: How the EU will react to Theresa May's request for a Brexit extension by Eoin Treacy

One senior EU source predicted that the leaders would be uncompromising and some, if not all, would lean on the prime minister to extend Article 50 as long as possible.

“Every time Mrs May has spoken to the leaders, their final decision has been tougher than was predicted by their officials,” the source said, pointing out the prime minister’s dismal record at the European Council.

“None of the leaders want to be blamed for a no deal Brexit," said one EU diplomat, “but they know that if they will be by their businesses if there is one.”

It is up to Donald Tusk, the president of the European Council, to broker a consensus between the EU-27.  On Thursday morning, he made it clear he would ask the heads and state of government to look favourably on a request for a long extension, understood to be between nine months and a year, which opens the door to a general election or second referendum.

Meanwhile influential MEPs such as Guy Verhofstadt and Manfred Weber are adamant that a British extension cannot hijack the European Parliament elections.

Broadly, countries with socialist governments hanker for a longer extension in the expectation of more left-wing British MEPs being elected in upcoming European Parliament elections, while centre-right governments fear a Eurosceptic surge if Britain is forced to run the vote in May.

Officials in Brussels, veterans of many marathon late night summits, are fond of saying, “you can never predict what will happen when the leaders get together”.

But here is a look at the EU’s movers and shakers on Brexit stand on extension today.

The decision to hold a third vote on May’s deal on the eve of the summit with European leaders is a cynical, though perhaps not unexpected move, by the UK government to have another stab at getting the deal passed. That is aimed at imposing a “my deal or no Brexit ultimatum” on the hold outs in the Eurosceptic movement. It also puts pressure on the European side since they will not know whether the deal is to be accepted or not until the night before they propose their conditions for an extension.

A lengthy delay, greatly increases potential for a redo of the Brexit vote. That’s a tried and trusted recourse within the EU, where both Irish and French voters have been asked to vote again, on treaties, because they dared to offer the “wrong” answer on the first attempt.

While Brexit is what is on everyone’s lips are present, the real question is what happens at the next general election. Politicians should be very wary because many people are either feeling betrayed, exasperated or disillusioned by the political system and the potential for a substantial shift to the fringes has to be the base case. 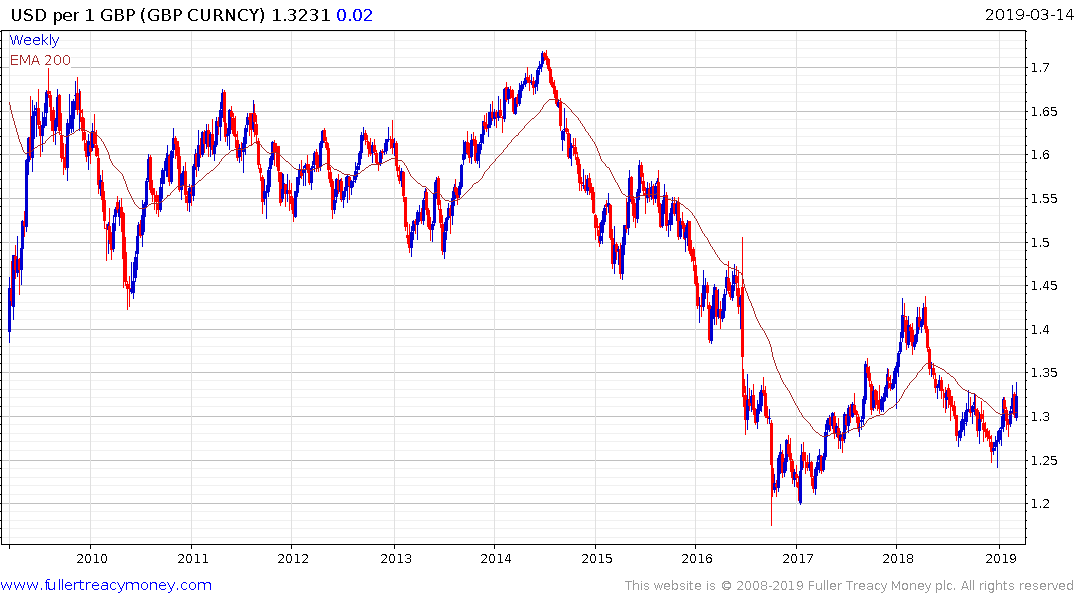 The Pound is continuing to hold its breakout against the Dollar and the Euro but has been subject to a great deal of volatility this week. Nevertheless, a sustained move below the trend mean will be required to question potential for additional upside. 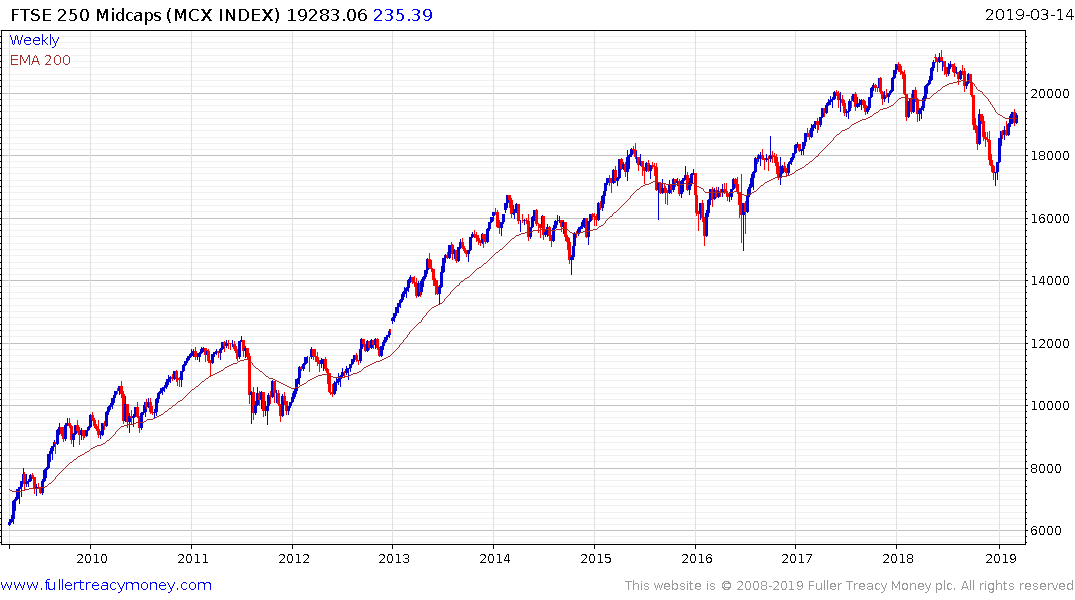 The FTSE-250 continues to steady in the region of the trend mean and potential for continued higher to lateral ranging can be given the benefit of the doubt provided the near-term sequence of higher reaction lows remains intact.