Mr. Cook, appearing later, disagreed on the latter point. “I don’t know a way to protect people without encrypting,” he said. “You can’t have a backdoor that’s only for the good guys.”

Apple and federal officials have been at odds for more than a year, since Apple issued a new version of its mobile-operating system that it said safeguards user information, even from law enforcement. But the White House signaled recently that it won’t seek new laws to force tech companies to make products that allow law enforcement to eavesdrop.

The USA is finally introducing chip and PIN technology and not before time. My credit card details have been compromised at least four times in the last two years. I’ve now got identity protection from ULCA Health, Anthem, Target, Home Depot but the letter I received yesterday was the one I was most surprised about. Experian, the firm other companies use to check the credit of a customer has been hacked with the loss of untold quantities of client data. In many respects I hope its Chinese government backed hackers since they have little interest in me specifically but after so many incidents one simply has to assume that our most personal data is out there in the public domain.

Encyption is certainly an option to protect one’s data but we are left open to theft every time we enter our details into a website’s shopping cart. Thankfully, Amazon’s focus on data centres and security means it has not, yet, had a data breach. PayPal’s enabling of rapid payment without the constant need to input one’s credit card represents a high growth service. 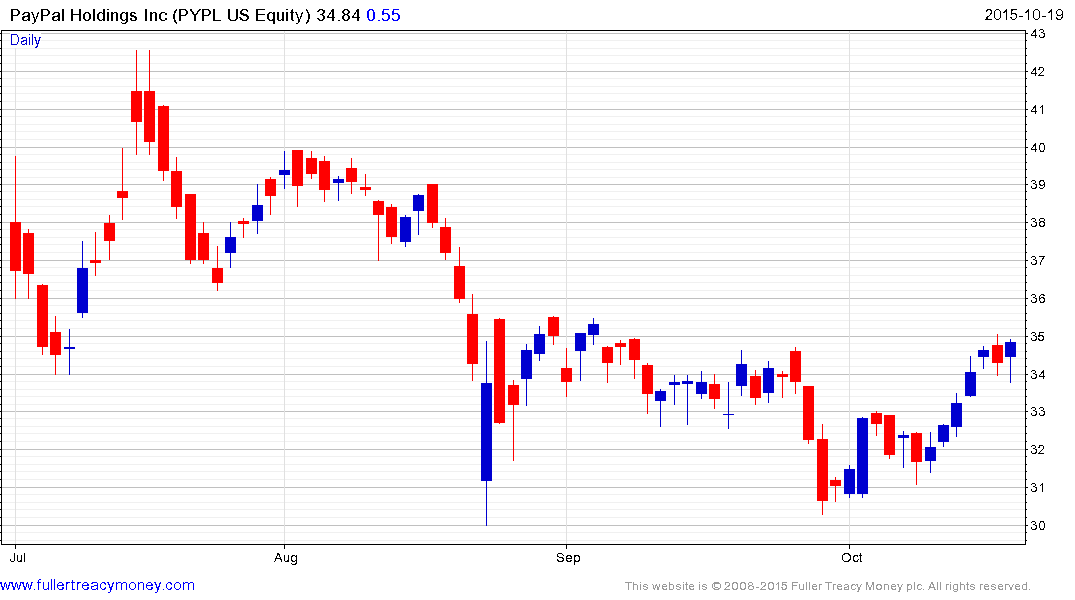 The share continues to bounce from a retest of its August lows.