Not Everybody's Buying the Saudi Story, Even as Money Gushes In
Comment of the Day

Not Everybody's Buying the Saudi Story, Even as Money Gushes In by Eoin Treacy

The Arab world’s biggest stock market will probably face difficulty in retaining foreign money unless companies become more transparent, according to some investors. Executives aren’t used to the level of scrutiny demanded by global funds as retail buyers, who typically focus on charts rather than financial analysis, account for about 75 percent of daily trading, according to Gary Dugan, chief investment officer at Dubai-based family office Namara Wealth Advisors Ltd.

Gary Greenberg, an investing veteran, isn’t joining the Saudi party. The London-based head of global emerging markets at Hermes Investment Management Ltd. wants more evidence of economic and political change as well as confidence in the rule of law as Crown Prince Mohammed bin Salman seeks to modernize the kingdom and wean it off its reliance on oil. Other investors including J O Hambro Capital Management are wary of adding to their emerging-market holdings as concern over the pace of U.S. policy tightening sent equities retreating from a multi-year high.

Admittance to the MSCI Emerging Markets basket is a big event for any market because it opens up one of the world’s largest cohorts of index tracking funds as potential investors.

There are governance issues in all frontier markets but Saudi Arabia is a special case considering how important its stability is to the global economy. Crown Prince Mohammed bin Salman is fighting wars on at least two fronts and is engaged in a massive reorientation of the domestic economy. These represent uncertainties for the market but, so far, the process is unfolding relatively stably although the IPO of Saudi Aramco also represents a major potential future event. 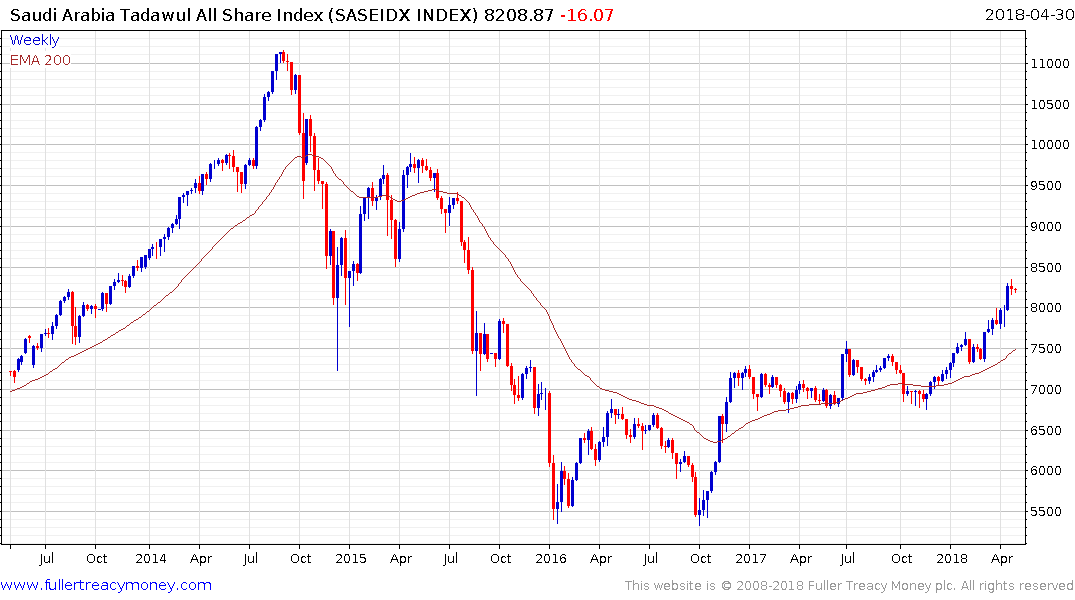 Right now, the stock market continues to rally, aided by the recovery in oil prices and the prospect of MSCI entry. A sustained move below the trend mean would be required to question medium-term scope for additional upside. However, if history is any guide, a pullback is to be expected once the stock market is admitted to the Index, on a buy the rumour, sell the news basis.