Johnson, who will meet DUP leaders in London on Tuesday, no longer has a working majority after 21 Tory MPs were expelled over their support for the legislation blocking a no-deal Brexit. He’ll have to rely on Labour votes to get a deal passed, even if he can convince the DUP to come back on board.

“The Tory Party has been entirely in hock to the DUP ever since they lost their majority,” Boles said at the launch of the group on Tuesday, referring to the disastrous 2017 general election. The party “is no longer dependent on the DUP for a majority because it doesn’t have a majority because it fired its
majority last week.”

Theresa May hamstrung the UK’s negotiating position by being forced to go into coalition with the DUP following her failed grab for power in calling an early election. The clearest answer to the backstop argument is to draw the border down the middle of the Irish Sea instead of between Northern Ireland and the Republic of Ireland.

That is anathema to the DUP, whose brand of militant unionism is opposed to any potential threat to the integrity of the United Kingdom. It should also be a bridge too far for most Conservatives but when the choice is between the Party dissolving and Northern Ireland where it has no MPs, anything is possible.

There is now clear potential that in order to get Theresa May’s deal through Parliament the “solution” will be to cut Northern Ireland loose. That is going to create a great deal of stress in East Belfast and other DUP strongholds. There is likely to be a significant violent backlash against the betrayal if it does in fact occur.

Very few MPs will come out and support the deal Theresa May negotiated but they have clearly refused on multiple occasions to leave without a deal. The EU has called the UK’s bluff and said they will not re-open the negotiations. The backstop was the primary sticking point for most MPs who voted against the original deal so solving that issue could get the deal passed with cross Party support.

That, of course, opens up a whole additional can of worms since the deal as it stands is membership in all but name. The net result of the whole Brexit crisis could be a smaller UK with little to no change in the relationship with the EU. It’s hard to imagine how voters are going to respond favourably to that outcome which is an argument against this particular course of events. The alternative is the Brexit date is extended ad nauseum. 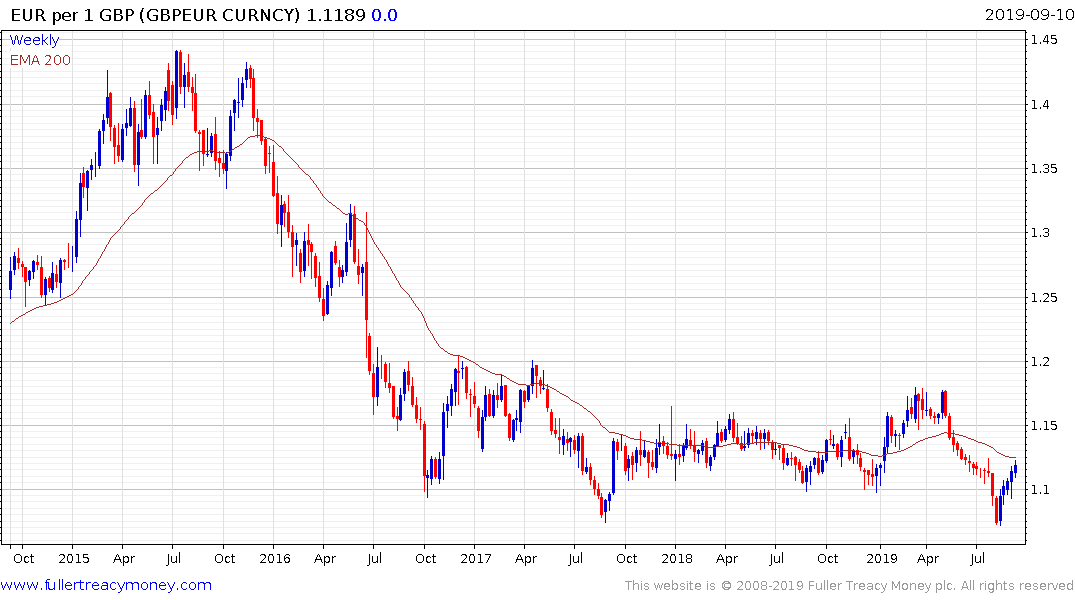 The Pound has rebounded against the Euro to break its succession of lower rally highs and to unwind its oversold condition. A sustained move back below €1.10 would be required to question near-term scope for further higher to lateral ranging.