No doomsday scenario, but also no need for major relaxation
Comment of the Day

No doomsday scenario, but also no need for major relaxation by Eoin Treacy

Bad news is that major policy relaxation is unlikely in the near term
In the 2008/11 downturns, we saw policy relaxations by the government. For 2014, given the central government’s adamant stance on economic reform and still-solid sales performance for end-user properties, we believe any significant adjustments to property market policies by the central government are unlikely and that the key adjustment should be pricing by developers (instead of economic reform, which is positive for the Chinese economy for the medium term). With our 2014E negative cash flows for the listed developers (mainly on aggressive land purchases in 2013), rising net gearing and inventory levels, developers should start cutting prices more meaningfully in the next two/three months. A key risk is that some developers may make incorrect market judgments on pricing, which could exacerbate the risks of financial distress.

Home upgrades no longer included in the PBOC’s support list
Recently, the PBOC has reiterated financing support only to first-time  homebuyers, but financing to upgraders (which used to be part of the government’s support list) and developers has not been mentioned at all. The government has also further tightened rules on trust and non-standard loans to developers, cracked down on zero-downpayment plans offered by some developers, and accelerated the establishment of realty registration (which is a step towards the introduction of property taxes). All this highlights that the overall property policy environment should not see much change for the rest of 2014. While we could see some minor policy fine-tuning by selected local governments, significant policy relaxation by local and central governments is unlikely unless there are significant price declines in the individual cities that pose major threats to the banking system, employment and the economy.

Markets are based on fundamentals but price is often driven by the mood of the crowd. When developers begin to cut prices, buyers who have been desperate to purchase race in but the more mature investor quickly learns to delay purchases in the hope of getting an even better bargain. Meanwhile those who hold inventory stop buying and begin to think about selling. As the process matures, if developers begin to see sales dip at a 10% discount, they are incentivised to increase the discount to 15% and so on. Confidence begets confidence as long as prices rise but weakness is preyed upon as prices decline.

Li Ka Sheng’s exit of the Chinese property market last year was a blow to confidence considering his record of buying low and selling high. The central Government’s reluctance to stoke inflation with an additional stimulus package and a desire to make housing more affordable suggests they will only intervene in the case of a rout.

Meanwhile the creation of the preferred share market earlier this year has been an additional way for banks to shore up their capital bases. Bank of China is seeking to sell CNY60 billion ($16 billion) while Agriculture Bank hopes to sell CNY80 billion in preferred shares. This suggests the banks are preparing their war chests for bad loan issues and helps to explain why the stock market continues to underperform despite attractive valuations. 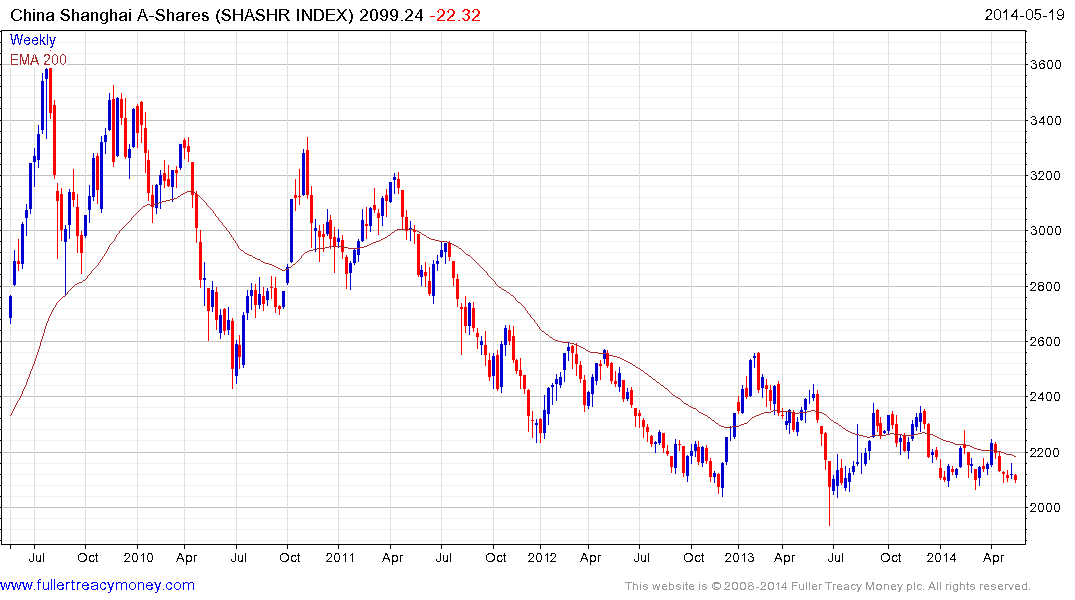