Japanese shares rose with the Nikkei 225 Stock Average advancing to its highest since 1992 on a weaker yen, as upbeat jobs data from world’s largest economy reignited optimism over global growth.

Japan’s currency slid to a one-month low against the dollar after Labor Department figures Friday showed the U.S. added more jobs than expected in November and the unemployment rate held at an almost 17-year low. Both the Nikkei 225 and the broader Topix index advanced for a third day, with banks and machinery makers providing the biggest boost. Local equities are bouncing back to their highest levels in a quarter century following a pullback in late November on profit-taking.

“The global economic expansion isn’t over yet,” said Tatsushi Maeno, a senior strategist with Okasan Asset Management in Tokyo . As the yen heads lower “investors will anticipate upward revisions to corporate profits ahead of the earnings season in March.”

Both main stock gauges retreated briefly on Monday as technology companies slid in the wake of the sector’s recent global selloff. A measure of electronics makers finished 0.1 percent higher after slipping by as much as 0.6 percent.
“Performance for semiconductor stocks like Tokyo Electron is sluggish with investors torn over whether it’s alright to take an optimal view on the sector again,” said Hideyuki Suzuki, a general manager at SBI Securities Co.

The Nikkei-225 has been ranging above 22,000 since early November and closed at an incremental new high today. Upside follow through tomorrow and a sustained move above 23,000 would reassert medium-term demand dominance. The broad Topix Index has now also moved to a new 25-year closing high and importantly these indices are doing so on a much lower valuation than Wall Street. 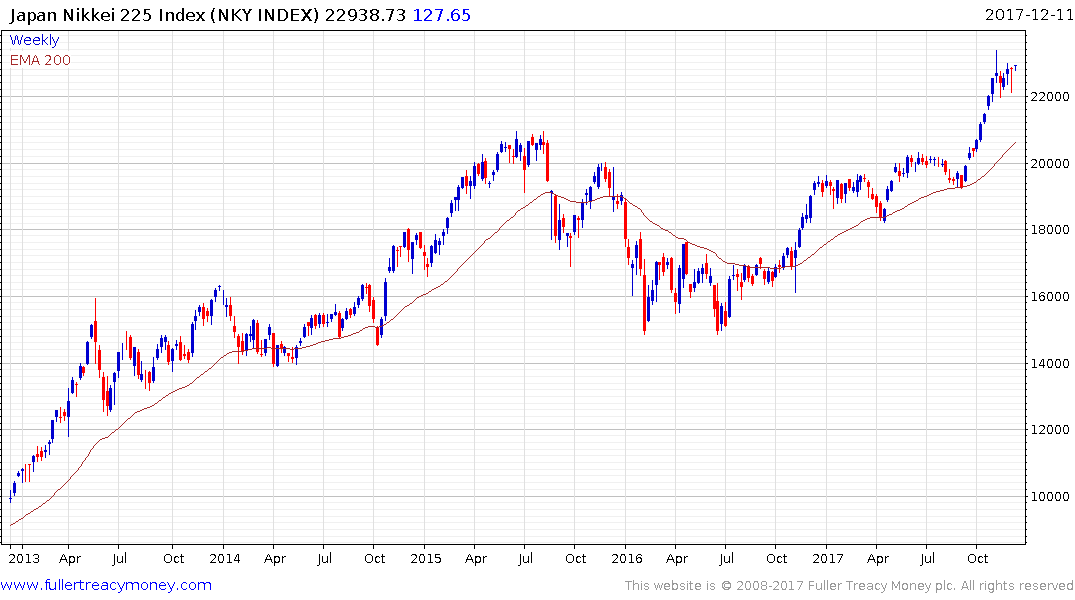 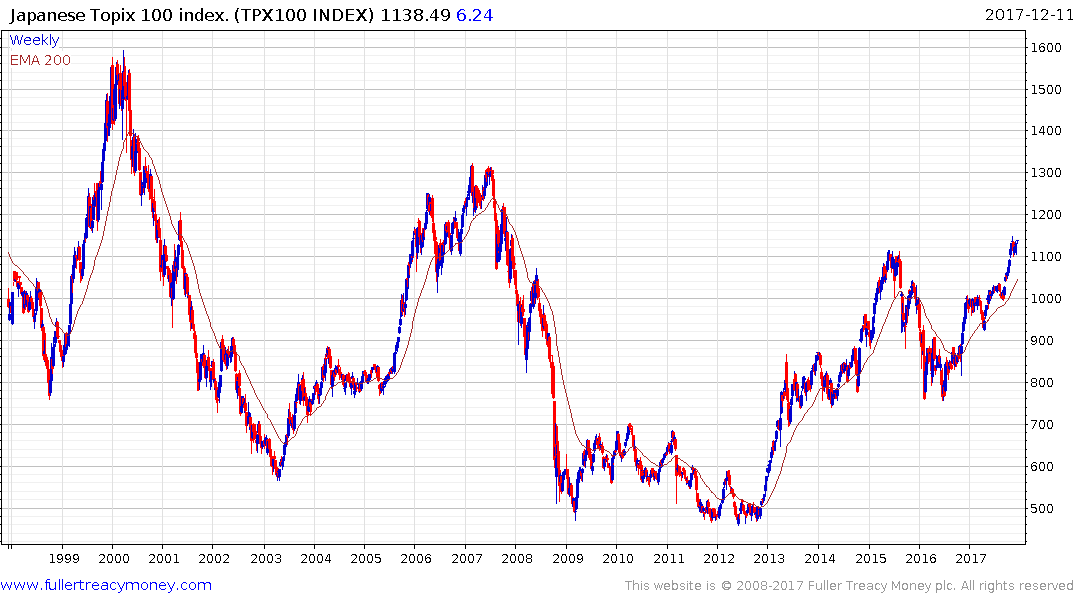 On every occasion the Topix got up to test this region over the last 25 years it failed to sustain the move and dropped back to make a new low. That consistency ended in 2016 when it bounced after ‘only’ a 500-point pullback. That suggests more important bullish themes are now in dominance. 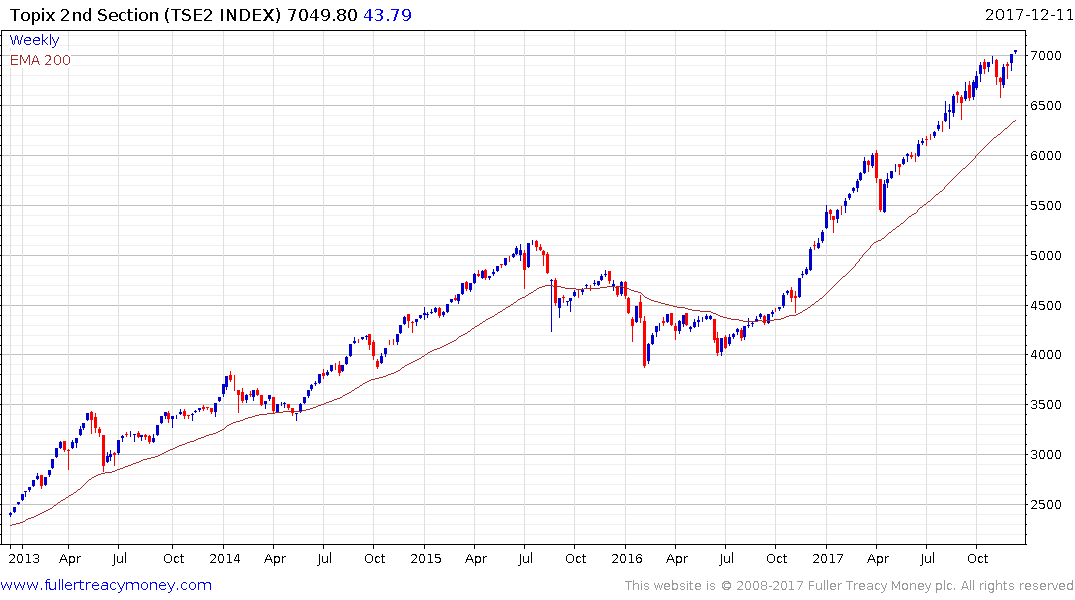 Importantly the Topix 2nd Section Index, which is an important lead indicator for the market, moved to a new all-time high today; breaking above the psychological 7000 level in the process. 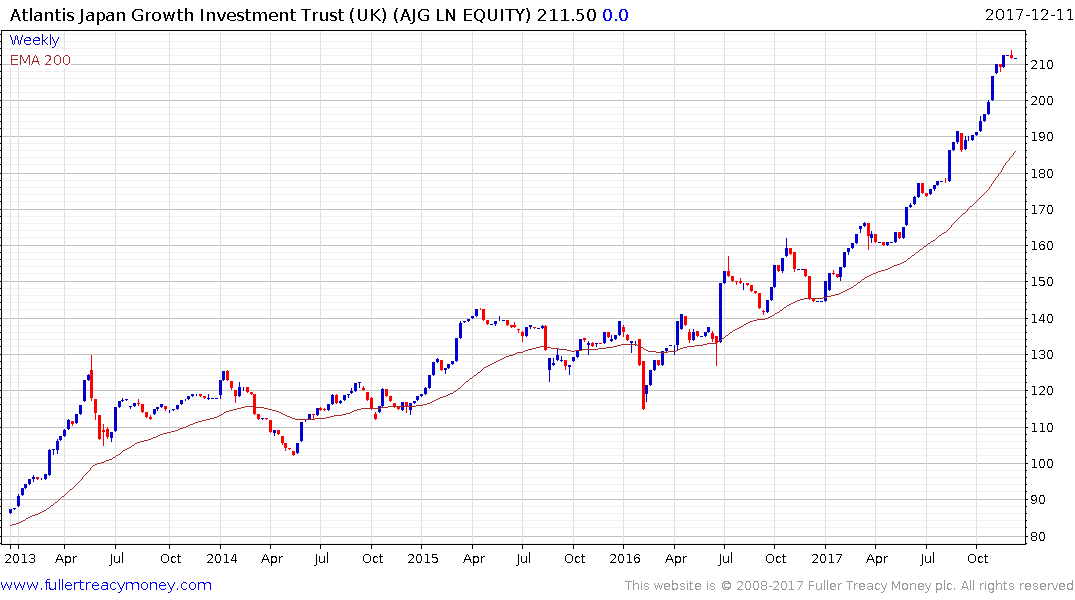 The UK listed, Pound denominated, Atlantis Japan Growth Fund is trading at a discount to NAV of 8.44% and has a relatively similar pattern to the 2nd Section. It is somewhat overbought in the short-term, but a sustained move below the trend mean would be required to question medium-term scope for additional upside.