Nigeria The No. 1 African economy
Comment of the Day

Nigeria The No. 1 African economy by Eoin Treacy

Although Nigeria now exceeds South Africa in economic size, it still has a long way to go if it wants to reach a similar level of economic development and sophistication. Nigeria’s GDP per capita is still only around one-third the size of South Africa’s and the World Bank estimates that more than 80% of Nigeria’s population have to make do with less than USD 2 per day (compared to about 30% in South Africa).3 Although in the rebased GDP the size of the agricultural and hydrocarbon sectors declined significantly, primary commodities still play an overly large role in Nigeria’s economy and account for nearly all of its exports. Moreover, the manufacturing sector remains very small compared to other emerging markets.

In order to close these gaps in economic development Nigeria has to improve its institutions and business environment. The country lags far behind South Africa in every sub-indicator of the World Governance Indicators (see chart 7). Especially in the “Political stability and absence of violence/terrorism” indicator, Nigeria is one of the worst performing countries in the world. This can be explained by the continuous security threat by the Islamist sect Boko Haram in the north of the country as well as sporadic tensions in the Niger delta. Nigeria also has stark problems in the business environment. In the latest World Bank Ease of Doing Business Report, the country only ranks 147th, far behind South Africa in 41st place.

“Governance is Everything” has long been a central pillar in how we assess the prospects for markets. In doing so it is important to recognise that while the absolute level of governance is an important consideration, the trajectory of governance is more important. The most important question we can ask is whether conditions are improving or deteriorating, not how good or bad conditions on the ground are.

When standards of governance are low administrations do not have to do much right in order to see an improvement. The corollary is that the further along the path to development, the greater the challenge to keep up the pace of improving standards of governance. Personally I view the Nigerian central bank governor’s outspoken stance on combatting corruption as an example of how governance is improving albeit from a very low base. 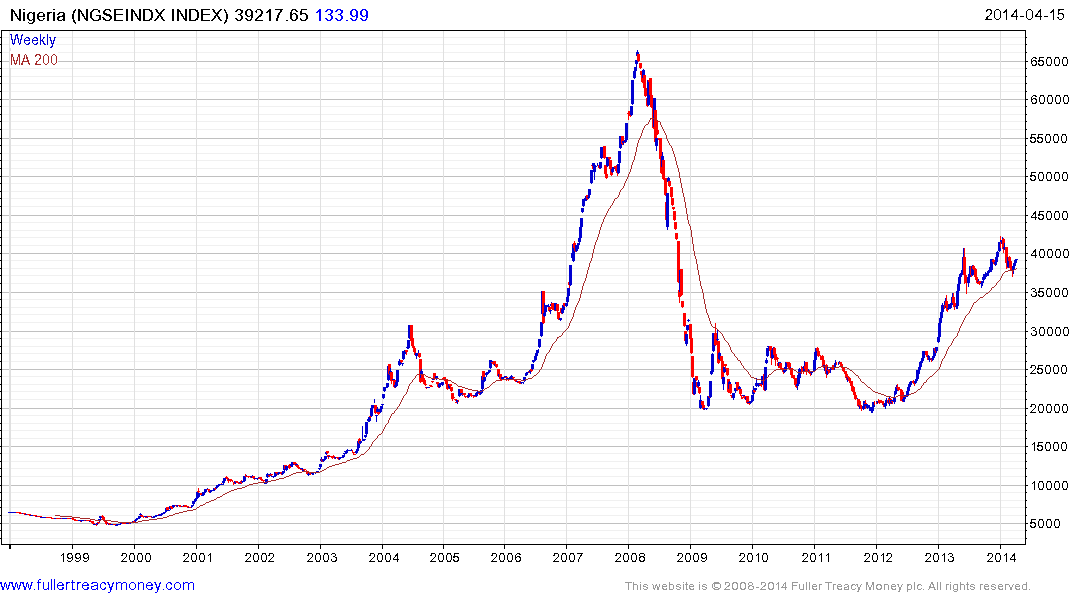 The Nigerian stock market broke out of a three-year base in 2012 and has been ranging mostly below 40,000 since early 2013. It continues to hold a progression of higher reaction lows and a sustained move below 37,000 would be required to question medium-term scope for additional upside.