Next Opportunity: Position for Theme-based Investment
Comment of the Day

Next Opportunity: Position for Theme-based Investment by Eoin Treacy

In the annual session of the National People’s Congress (NPC), Chinese leaders appear to have opted for Chinese medicine, not western ones or a drastic surgery, to cure past problems. They called for stabilizing growth in 2014 while the economy is climbing hills and crossing ridges. This does not rule out the possibility of sub-7.5% growth this year, but the resource-rich government will try to avoid a systemic risk.

Defaults in the financial markets are possible but significant ones would be avoided. In other words, our concern is not the defaults in the near-term but in the long-term.

The economy may moderate further but a hard landing is unlikely in the near term. The bottom line is to cap any sharp rise in the unemployment rate.

This reconfirms our base case: growth first, reform second. Reforms are likely to take place only when the CPI is below 3.5% but GDP growth above 7.0-7.5% (or, below 4.6% urban registered unemployment).

However, the market is likely to remain cautious in the near-term regardless of the government policy and growth target. Some investors worry about no reform as a high growth target limits any room for reform, and others are more concerned over the near-term defaults and thus further economic downturn. Neither scenario is positive to the equity market.

Our more constructive view is that the next investment opportunity will likely be a mixture of growth stabilization and reform. The government may first buy time by avoiding significant defaults and then roll out reform to boost domestic demand and engage in a gradual pace of de-leveraging. An even better but difficult result is when near-term defaults are avoided and the economy stabilizes; reforms are able to ease default risks in the long-term.

The above report represents a measured medium-term outlook for China’s economy and is probably in line with how the administration sees the situation. However, the short-term outlook is more focused on the fact that an increasing number of troubled trust products are missing coupon payments and investor hopes of receiving their principal are deteriorating. Here is a section from a Bloomberg article with some additional detail:

“China’s economic outlook has deteriorated and more bond defaults could be coming, so it’s weighing on the yuan,” said Bruce Yam, a currency strategist at Sun Hung Kai Forex in Hong Kong. “A weaker yuan could help some exporters, especially the small- to medium-sized ones. It will also facilitate meeting China’s growth target this year.”

There is every chance that the Party Congress will conclude with a commitment to stabilise growth in the region of 7.5% are to progress with a modest reform agenda. However, rather than rely on the hope of reform, the market appears to be responding to the reality that bankruptcies are inevitable among smaller, less politically connected entities and that the Yuan has in all likelihood posted a medium-term peak. 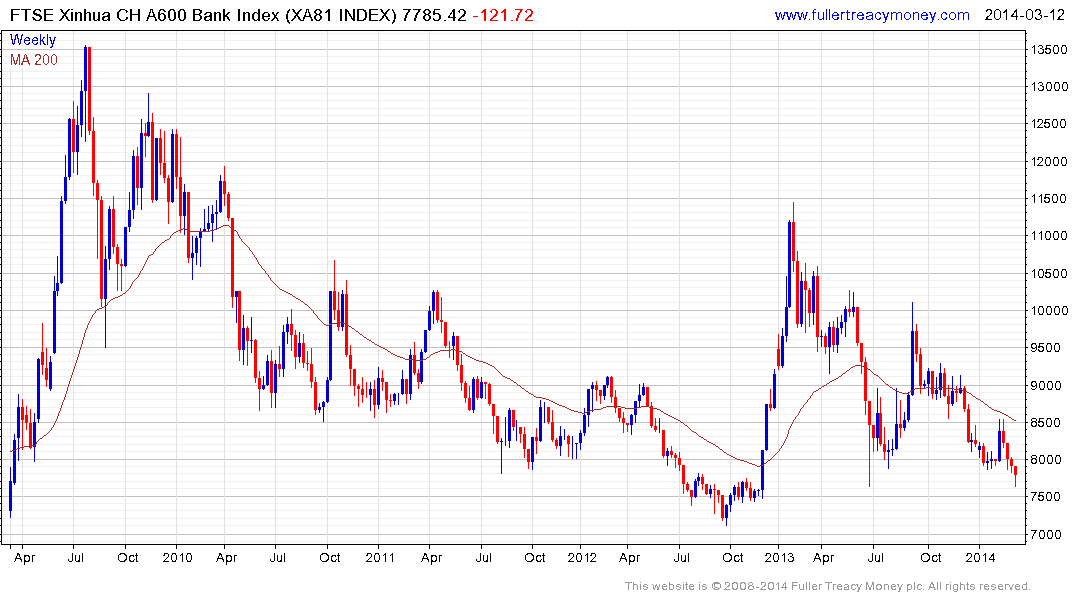 The FTSE/Xinhua A600 Banks Index has at least steadied in the region of the June lows but will need to break the medium-term progression of lower rally highs in order to begin to suggest demand is returning to dominance and to suggest investors are willing to take attractive valuations at face value. 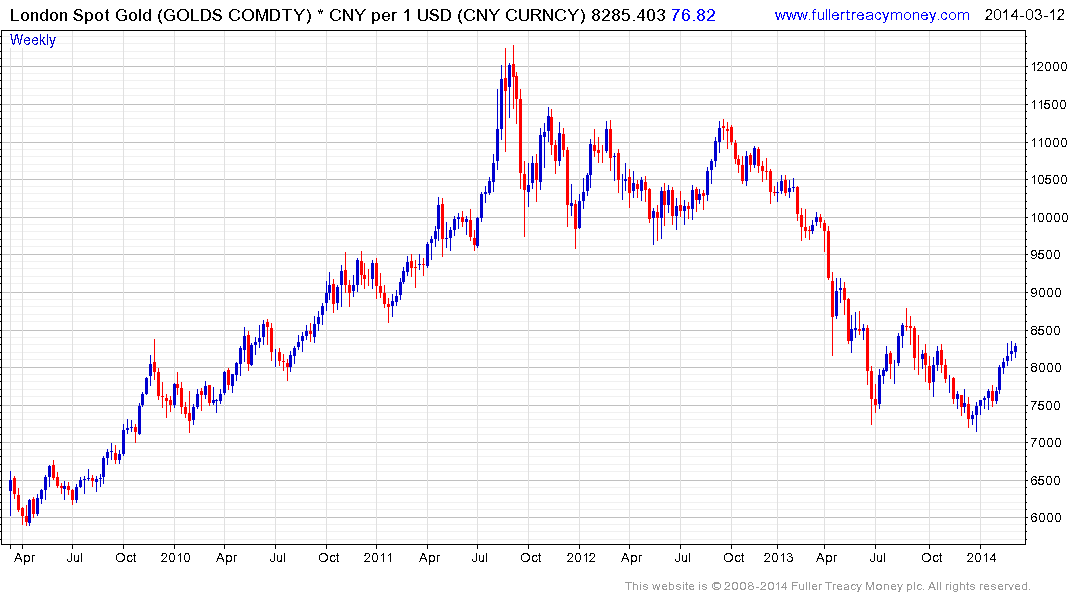 Investors have focused on the effect a weakening Chinese economy is having on copper and oil prices. However, an important reason US investors favoured gold from the early 2000s was because the outlook for the US Dollar was deteriorating. Chinese investors don’t generally need much convincing to buy gold. They will be aware of the fact that the Yuan denominated price of the metal will be flattered by the currency’s weakness. 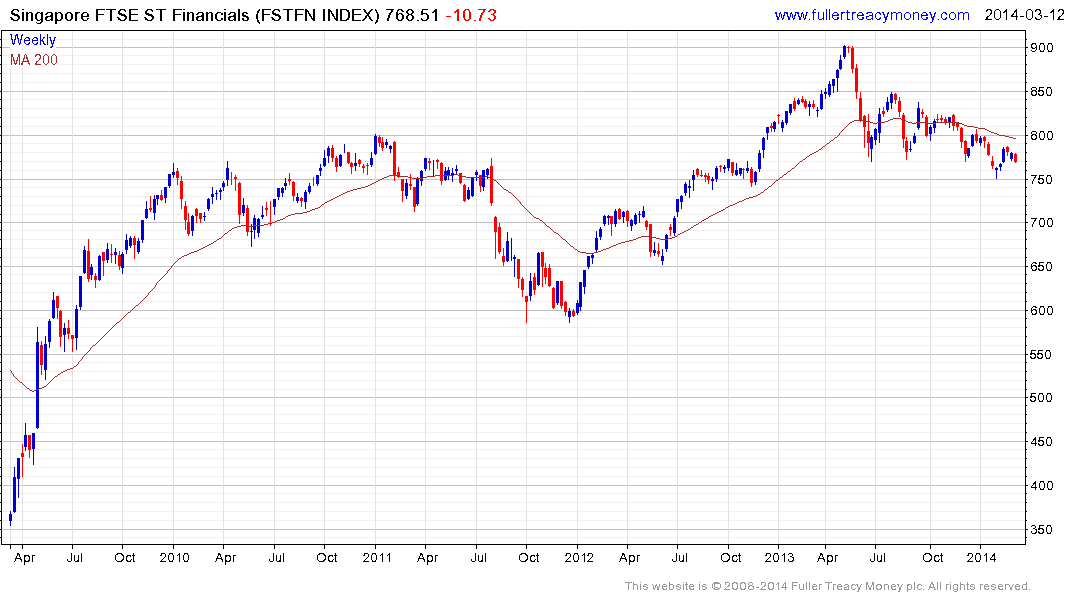 An additional consideration is that the Singaporean financial sector, which is heavily reliant on private banking remains in a downtrend. It hit a medium-term peak in April 2013 and has held a progression of lower rally highs since. A sustained move above the 200-day MA will be required to begin to question medium-term supply dominance. Singapore is a centre for offshore Yuan trading, was a favoured destination for Chinese mainland companies to list until a few years ago and has a substantial number of Chinese private banking customers. The underperformance of the financial sector is not a bullish characteristic.