The Reserve Bank of New Zealand (RBNZ), which seeks to keep inflation around the midpoint of a 1 per cent to 3 per cent target band, raised its official cash rate on Oct 6 and signalled more increases are coming. That is despite a coronavirus outbreak that has kept largest city Auckland in lockdown for two months, curbing economic growth.

"We can now see annual CPI (consumer price index) inflation exceeding 5 per cent by the end of this year," said Mr Mark Smith, senior economist at ASB Bank in Auckland. "The widespread nature of price increases seen today was not a comforting sign. If it were not for the Delta variant outbreak, the pace of OCR (official cash rate) hikes being implemented by the RBNZ would potentially be quicker than 25 basis point increments."

Investors ratcheted up bets on further RBNZ rate hikes. Another increase is now fully priced in for the Nov 24 policy decision and there is a chance the bank will deliver a 50-point move, swaps data shows.

I received this account from a New Zealand-based subscriber last week which may be of interest:

I hope life is going well for you and your family in your new abode.

Life is very good on a personal level although we are sad at our present inability to visit our son and his family in Portugal. They moved from the UK to the Algarve in early 2019 just before Covid hit. Luckily, we have a daughter and her family here and we are helping them to build a new house next door to ours.

Auckland is struggling with an outbreak of Delta but, so far, the rest of the country is Covid-free, as we have been all the way through.  There is a big race to get 90%+ of the nation fully vaccinated before Christmas. That looks achievable and we all hope we won't stumble at the last hurdle. NZ has coped with the pandemic very well to date but Delta is a tricky challenge.

The economy has surprised everyone with its strength, even through lockdown periods.  Our government debt levels were low by world standards going into the pandemic (thanks to years of sound economic management by successive administrations) and even with the generous support measures over the past 18 months, net Government debt is still only around 30% of GDP.  Apart from tourism and some parts of hospitality, businesses are thriving, with the recent tax- take far above expectations.

As in many countries, Covid has highlighted the wealth disparities in our society, exacerbated by the recent house price boom.  The disadvantaged communities (Maori and Pacific Islanders in our case) are at greatest risk of severe Covid with unlucky genetics, poor housing and little financial flexibility.  Lockdowns have shown the absurdity that most of the truly essential workers in societies are often also the lowest paid and least appreciated.  The social fabric is a precious, fragile thing and history shows that prolonged injustice and disparity will sooner or later cause it to rend.

As the fortunate son of Estonian WW2 refugees from totalitarianism, it troubles me that surveys all over the Western world show younger people losing faith in democracy and market economies and, unfortunately, it's not hard to see why in many places today.

I want to thank you for the great job you are doing in taking over from the late, great David.  As a long-time subscriber (and Chart Seminar attendee), I can't think of a year where your service hasn't helped me make up my subscription several times over.

Thank you for this generous email. New Zealand has fared better than most during the pandemic and not least because demand for its primary exports has sustained the economy despite the challenges of losing tourist revenue.

I totally agree on the challenge of young people losing faith in free markets and democracy. Unfortunately, they have grown up in an environment where markets have not been free and where democracy has been overridden by special interest groups (both public and private) and much of what passes for legislation is the product of focus groups.

In the USA and Europe, we are living with the result of the official response to the credit crisis and the sovereign wealth crisis. In both cases, private sector debts were absorbed by the state and paid off by taxpayers while citizens suffered. That highlighted the deficiencies evident in globalization and offshoring. Mid to lower tier private sector workers paid the price for these trends. This article from the FT last month highlights the yawning gap between public and private sector pensions for example. It might be a UK focused article but the point is equally applicable internationally. 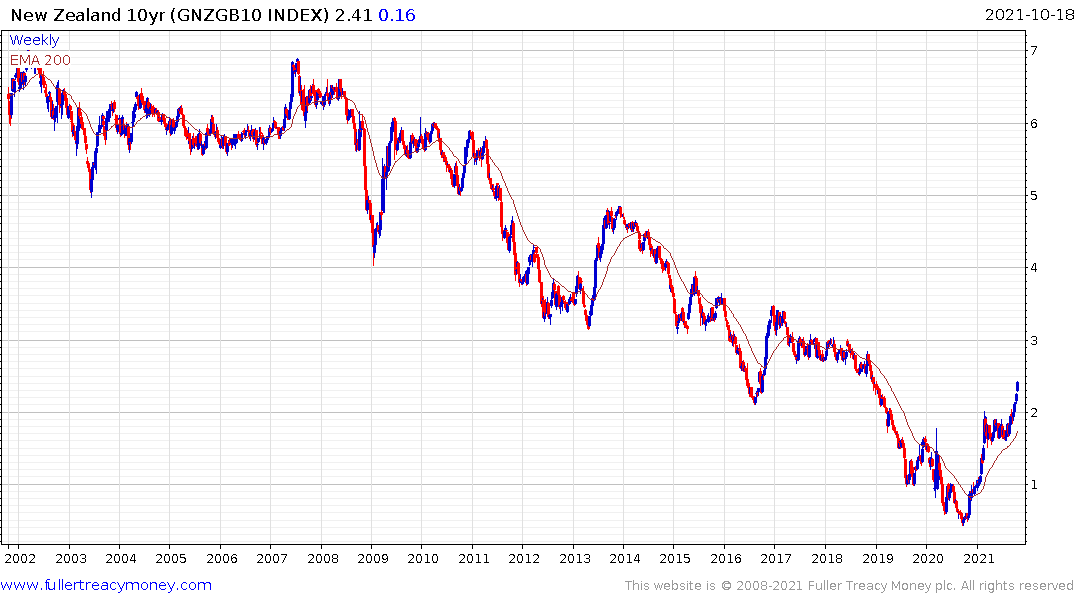 New Zealand went into this crisis in a sound fiscal position and will likely emerge in a sound fiscal position. However, interest rates will need to rise to control inflation, and there is less resistance to that move than elsewhere because of the history of success from sound fiscal/economic policies. The challenge with following that policy is it will weigh on the property sector since most mortgages have short fixes. 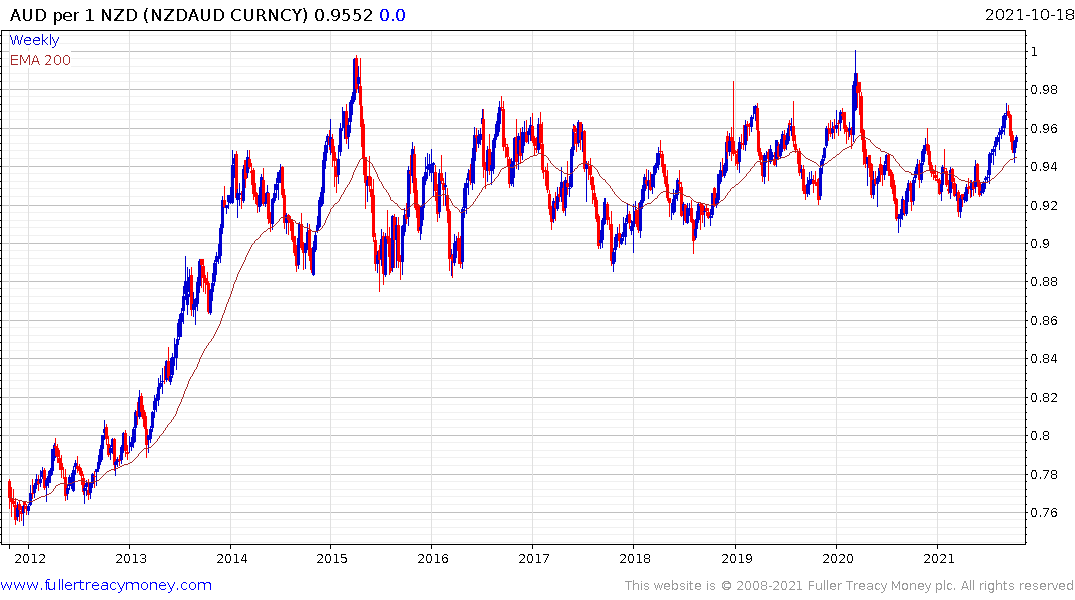 The New Zealand Dollar has been ranging in a tight manner versus the Australian Dollar since 2015 and is currently firming from the 95₵ area.

The New Zealand 50 Gross Index has lost momentum this year and is now coming back to test the region of the trend mean. The 200-day MA has offered support on every single pullback, other than the pandemic panic since 2011. Therefore, it is an important area of potential support that needs to hold if the benefit of the doubt is to be given to the upside. A sustained move below 12,000 would be a major trend inconsistency.