One of our HK analysts wrote this week: “the USA government has issued a joint advisory on the risks of conducting business, studying, and investing in HK, in a direct response to the June 2020 National Security Law (NSL)…which effectively crushed the autonomous region’s special freedoms. Certain multinationals in Hong Kong now face two-way political risk as the U.S.-China decoupling continues…Businesses will be forced to pick a side: adhere to U.S. sanctions and be penalized by China or potentially violate U.S. sanctions to maintain access to Chinese markets. Airlines will need to provide passenger information to authorities before flights depart…to prevent…political dissidents from leaving HK. The NSL allows authorities to conduct wiretaps or electronic surveillance, search and seize electronic devices, requires internet service providers to produce corporate or consumer data. The NSL has dissolved freedom of press in HK. The city’s public radio station is also now under tight censorship...all media based in HK now reflects the political agenda of Beijing. The U.S. has placed sanctions on several individuals and entities within HK, barring U.S. businesses and nationals from transacting with them.”

It is clear that under President-For-Life Xi, the primary condition for portfolio investment in China –the safety of one’s capital in a free system under a Rule of Law- does not, indeed cannot, exist.

This brings us back to the frog. The human tendency to cling onto hope and the status quo can be admirable, but it can also be a pathway to the poorhouse in investment. The destructive forces of late 1930s Germany were foreshadowed a decade before; “Mein Kampf” was published in 1925.

Why not invest in sectors that are actively encouraged by the Chinese state, such as semi-conductors, or which lie outside the ambit of state interference? For institutional investors tied to a global equity index, this is indeed an option, though the tendrils of the Chinese state reach everywhere. For private investors who have no compulsion to invest in China, and who see the world of investment as a “global beauty contest” it may be considered a risk too far. Other more beautiful shores, those that feel the radiation effect of a booming China, may offer more attractive prospects. ASEAN and the free-thinking members of the Trans Pacific Partnership spring to mind.

Sometimes investing is about the return of your money rather than return on it. That’s the challenge for investors in Chinese equities at present. It’s a big question because Chinese stocks represent significant weightings in the broad emerging markets universe. That’s true for both equities and bonds.

Institutional investors looking to outperform the MSCI Emerging Markets Index need to take a hard look at their Alibaba and Tencent exposure. They are the 2nd and 3rd largest shares on the Index, now behind Taiwan Semiconductor. Both are trending lower and TSMC peaked in January. 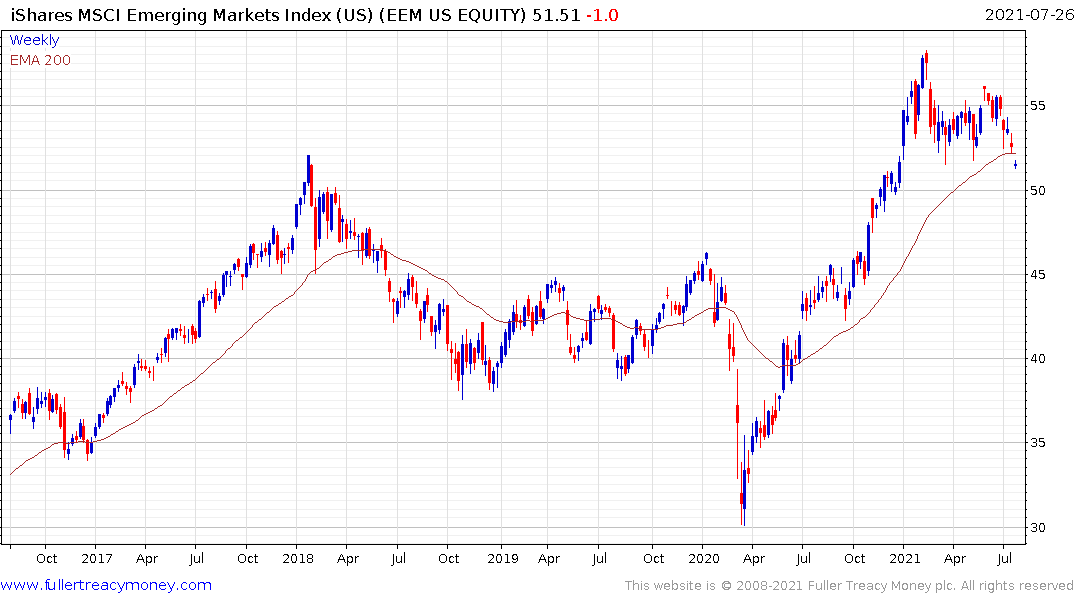 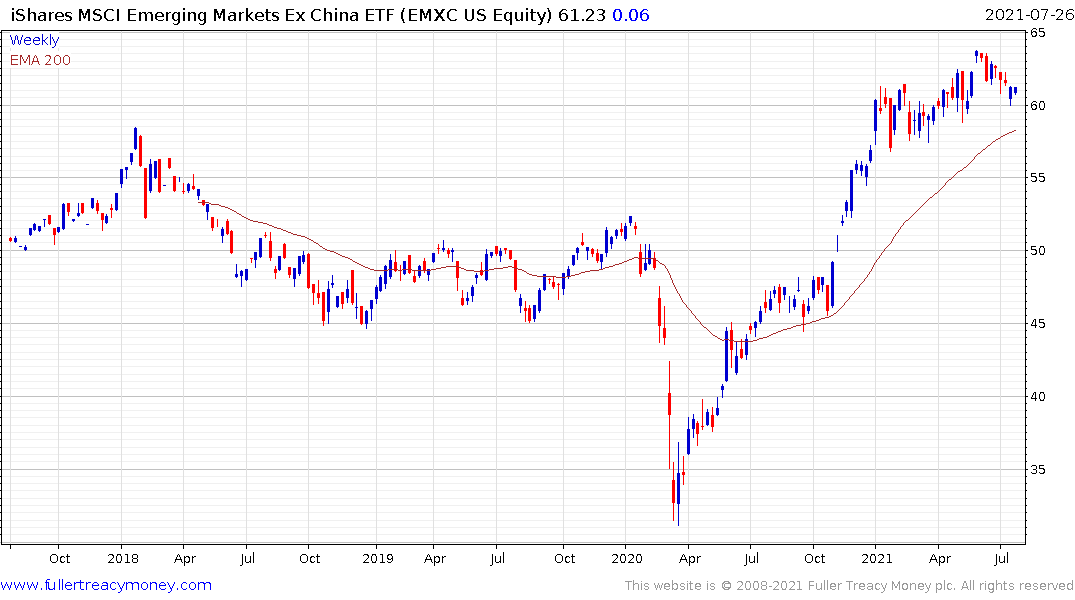 The iShares MSCI Emerging Markets ex China ETF continues to outperform by a wide margin but even that will be unlikely to be immune from the drag China represents to the wider equity universe if the downtrend continues.

Perhaps the biggest challenge for investors today is to find an unbiased view on China. If a company has an office in Hong Kong, they are legally obliged to refrain from criticising the regime. If a company has significant revenue in mainland China, they are well aware of the repercussions of stepping outside scripted responses. Any investment house that has successfully raised money for funds or private equity ventures from China is in the same boat. Every one of the large investment banks are actively seeking to build businesses in China, so they are in a position to make negative comments.

Then we have the green lobby. The climate alarmists like Jeremy Grantham never cease telling us how much further along China is in meeting its climate goals. China builds more coal fired power stations in a year than the rest of the world combined but because they erect a few solar farms and posture about green priorities they are given a free pass. These investors never talk about how much money they have raised from China for their investment funds.

China is playing the long game and the first principle is do everything to ensure single party rule. There is no point winning if you are not around to enjoy it. That means every industry will have a limit on growth potential; lest it become a threat to the government.

The biggest fear of Chinese citizens is that they are on the cusp of another Cultural Revolution. Nothing has occurred to allay those fears.