The more recent manipulation is different from the one described in the Bloomberg Businessweek report last week, but it shares key characteristics: They’re both designed to give attackers invisible access to data on a computer network in which the server is installed; and the alterations were found to have been made at the factory as the motherboard was being produced by a Supermicro subcontractor in China.

Based on his inspection of the device, Appleboum determined that the telecom company's server was modified at the factory where it was manufactured. He said that he was told by Western intelligence contacts that the device was made at a Supermicro subcontractor factory in Guangzhou, a port city in southeastern China. Guangzhou is 90 miles upstream from Shenzhen, dubbed the `Silicon Valley of Hardware,’ and home to giants such as Tencent Holdings Ltd. and Huawei Technologies Co. Ltd.

The tampered hardware was found in a facility that had large numbers of Supermicro servers, and the telecommunication company's technicians couldn’t answer what kind of data was pulsing through the infected one, said Appleboum, who accompanied them for a visual inspection of the machine. It's not clear if the telecommunications company contacted the FBI about the discovery. An FBI spokeswoman declined to comment on whether it was aware of the finding.

There is an air of “shutting the barn door after the horse has bolted” to this reporting since the revelations date from earlier this year and whatever data was available has likely already been stolen. It is reasonable to assume that China has as much data about everyone in the West as it could want and that cyberwarfare is certainly going to be a part of any future conflagration.

This article from the Wall Street Journal focusing on the systematic nature of intellectual property theft may also be of interest.

These continued revelations mean manufacturing of electronic components can no longer take place in China. That is great news for countries like Vietnam, India, Thailand, South Korea, Taiwan over the medium-term but perhaps not right away since major manufacturers from all of these countries have operations in China that are now under pressure. 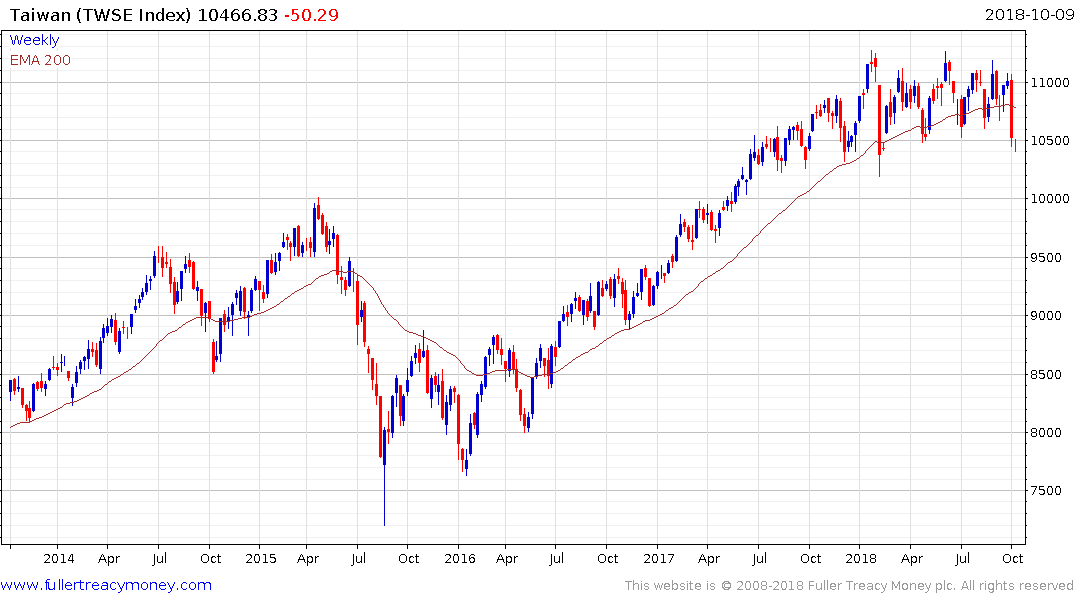 Taiwan pulled back sharply last week and will need to continue to hold the 10,000 level if medium-term potential for continued upside is to be given the benefit of the doubt. 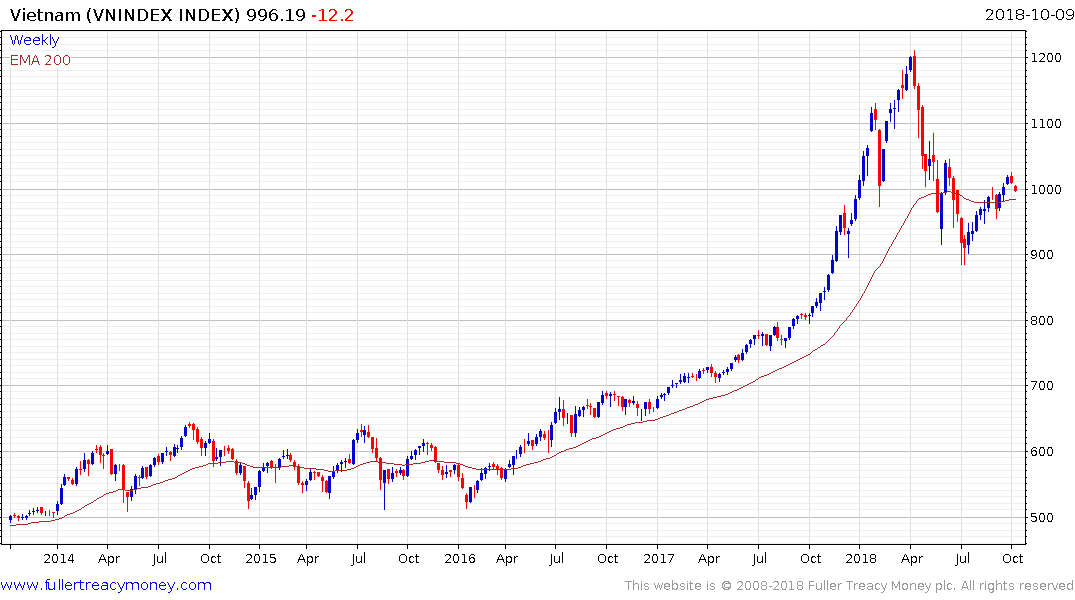 Vietnam has been rebounding since the July low but will need to hold the 950 area if the three-month progression of higher reaction lows is to remain intact. 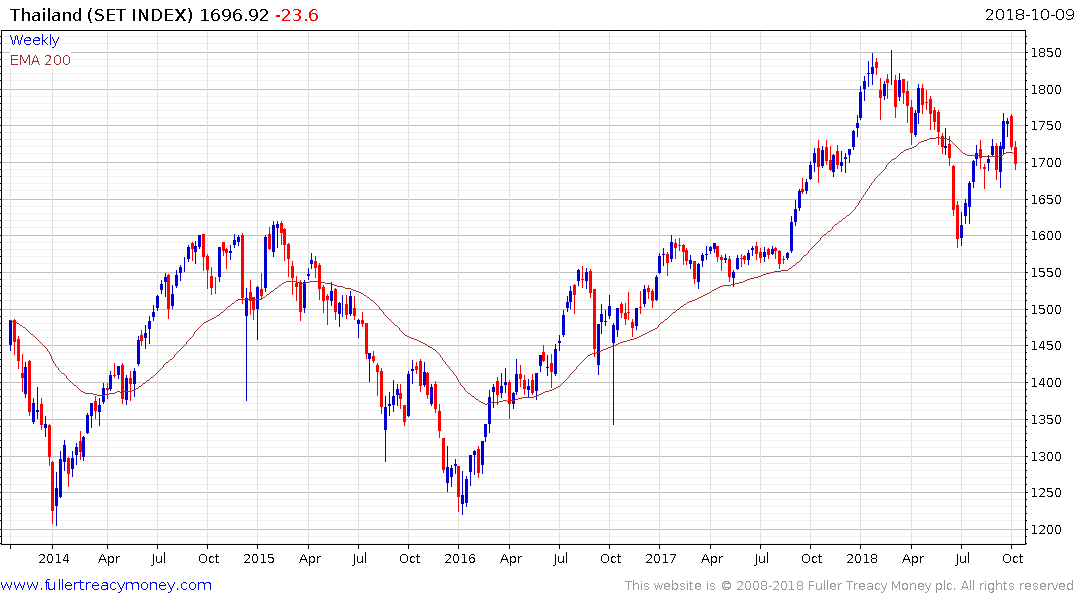 Thailand has eased back over the last week on central bank reticence to raise rates which has weighed on the Baht. The SET Index needs to hold the lows near 1670 if potential for higher to lateral ranging is to be given the benefit of the doubt. 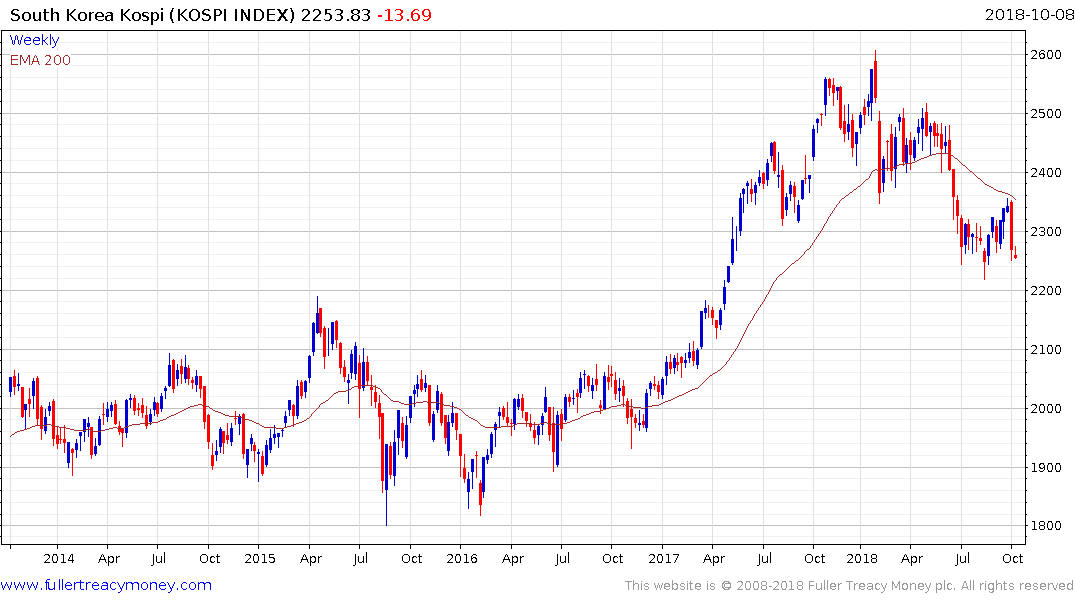 The South Korea Kospi pulled back from the region of the trend mean last week and will need to sustain a move above 2350 to signal a return to demand dominance.