In the team's early experiments with base editing a specific mutation associated with the disease hemochromatosis was successfully fixed. No unwanted off-target effects were identified and the base editor enzyme operated with greater than 50 percent efficiency.

?"We are hard at work trying to translate base editing technology into human therapeutics," Liu says.

The second new CRISPR innovation revealed recently comes from a collaborative team of Broad Institute and MIT scientists. For the first time the team discovered a way to accurately edit RNA base pairs in human cells.

Dubbed "REPAIR" this system also focuses on base editing but this time is targeted at RNA. Unlike permanent changes to DNA, RNA is much more ephemeral and even reversible. The ability to edit RNA in human cells opens up an entirely new world of disease treatments targeting conditions including diabetes and IBD.

"REPAIR can fix mutations without tampering with the genome, and because RNA naturally degrades, it's a potentially reversible fix," explains co-first author David Cox.

CRISPR represents a paradigm shift for the genetics industry because it reduces the cost and time required to experiment with how to edit DNA. When I visited the MIT genetics labs a year ago it was clear that what was next to near impossible five years ago is now something doctoral students can achieve with ease on a daily basis.

In many respects CRISPR has been the catalyst for growth in the immuno-oncology sector because the process of editing T-cells to target, rather than ignore, cancers is greatly facilitated by the new editing process. The ease with which this can now be achieved has in no small part contributed to the sector reaching commercial viability. 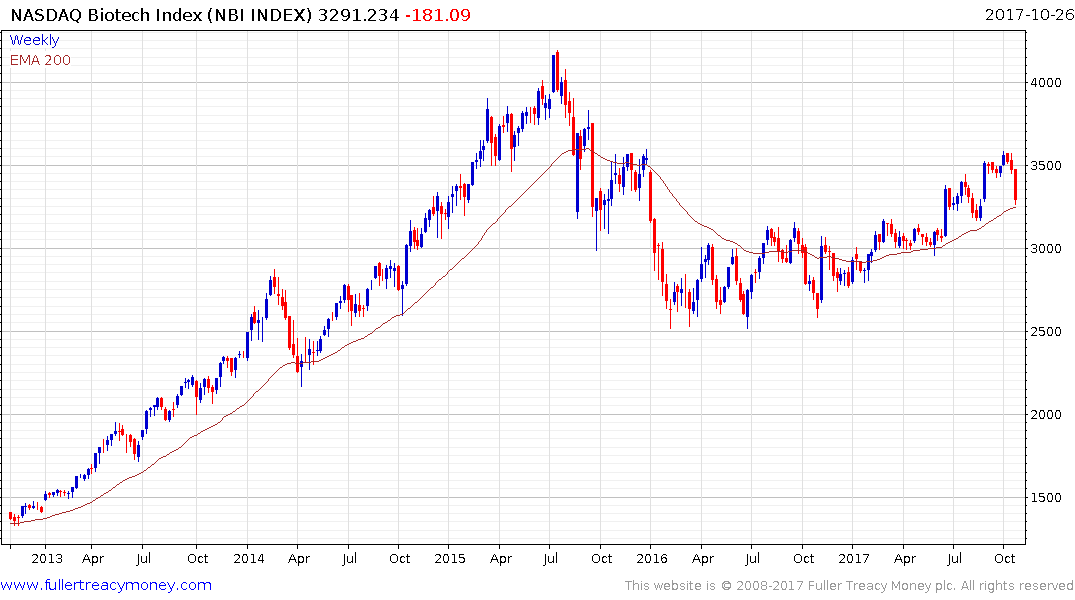 The Nasdaq Biotech sector was negatively impacted this week by Celgene’s collapse in the aftermath of failing to meet forward guidance. The Index is now testing the region of the trend mean and will need to demonstrate support soon if medium-term scope for continued higher to lateral ranging is to be given the benefit of the doubt.