“As battery researchers, it’s vital to address the root problems in the system," says Shirley Meng, the corresponding author. "For silicon anodes, we know that one of the big issues is the liquid electrolyte interface instability. We needed a totally different approach."

This new approach involved making some tweaks to the way the silicon anode is put together, with the scientists eliminating carbon and binders that are normally used, and opting for a cheaper form of micro-silicon that undergoes less processing. A sulfide-based solid electrolyte was then introduced to carry the charge, and the resulting battery proved extremely stable, by avoiding the damaging interactions at the anode.

The novel silicone all-solid-state battery is described as safe, long-lasting and energy dense. A lab-scale full cell was shown to be capable of 500 charge and discharge cycles while retaining 80 percent of its capacity, demonstrating the stabilizing effects of the new design.

It seems like there is a new battery innovation touted every day. What’s particularly relevant is the time lines to commercialisation are seldom mentioned.

Many jokes about nuclear fusion have been made over the years to the effect it is always 30 years away. At least now some say fusion is five years away which reflects enthusiasm at concrete steps already made.

Solid state batteries were first supposed to be delivered in 2017, then 2019, then 2021 and QuantumScape now says they are confident they will have a commercial ready battery by 2026. 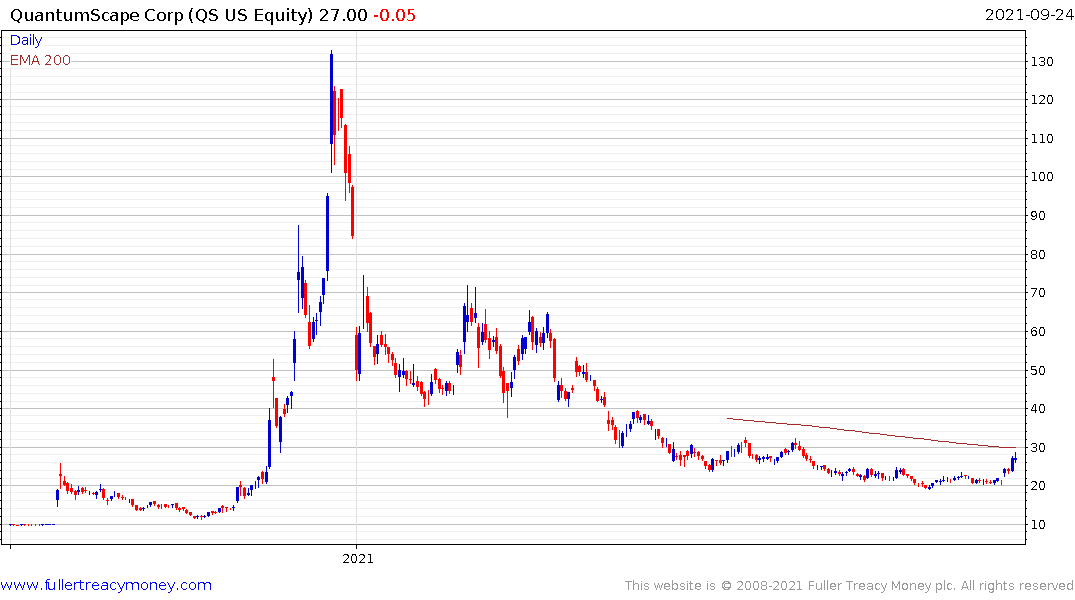 None of that is hampering meme stock traders. QuantumScape is attempting to breakout of a six-month base.