Netherlands Headed For Unprecedented Crisis: Millions Of Retirees Face Pensions Cuts Thanks To The ECB
Comment of the Day

Netherlands Headed For Unprecedented Crisis: Millions Of Retirees Face Pensions Cuts Thanks To The ECB by Eoin Treacy

In some ways, the Netherlands has one of Europe's most generous retirement systems: at its core, it represents a basic pay-as-you-go state pension as well as employer-run pension scheme which together provide workers with about 80% of their average lifetime wages when they retire. The US and UK have similar systems, but Dutch pension funds are more generous and must use a lower risk-free rate to value their liabilities, forcing them to hold more assets.

Unfortunately, the lower Dutch risk-free rate is not low enough, and as a result about 70 employer-run pension funds with 12.1m members had funding ratios below the statutory minimum at the end of September, according to the Dutch central bank. And here lies the rub: if funds have ratios below the legal minimum for five consecutive years or have no prospect of recovering to a more healthy level, they must cut their payouts. Interest rates have rebounded slightly in recent weeks, but many funds are still facing cuts.

In other words, in making a select handful of European stockholders rich courtesy of NIRP and QE, Mario Draghi is threatening the pensions of hundreds of millions of retired European workers.

So what, if any, is the solution?

Last week, Rabobank reported that the Minister of Social Affairs is supposedly willing to prevent a large part of the pension benefit cuts of 2020, as the government is reportedly willing to lower the minimum coverage ratio from 100% to 90% for one year. This temporary measure can be seen as a pause button, which buys time for:

Pension funds to hopefully recover over the next year. For pension funds, a rise in their risk-free rate term structure which is used to discount their liabilities (EUR 6m swap rates) would be most helpful
Continuing to work out the details of the Pension Reforms announced in June 2019. Unions, employer representatives and the opposition parties were against pension cuts because this would undermine the goals set out in the Pension Reforms.

The logical result of negative yields is the holders of these assets eventually take a loss. Since pensions generally run a ladder of maturities in an attempt to match cashflows with liabilities the proverbial buck stops with them as the yield-to-worst loss is priced in. 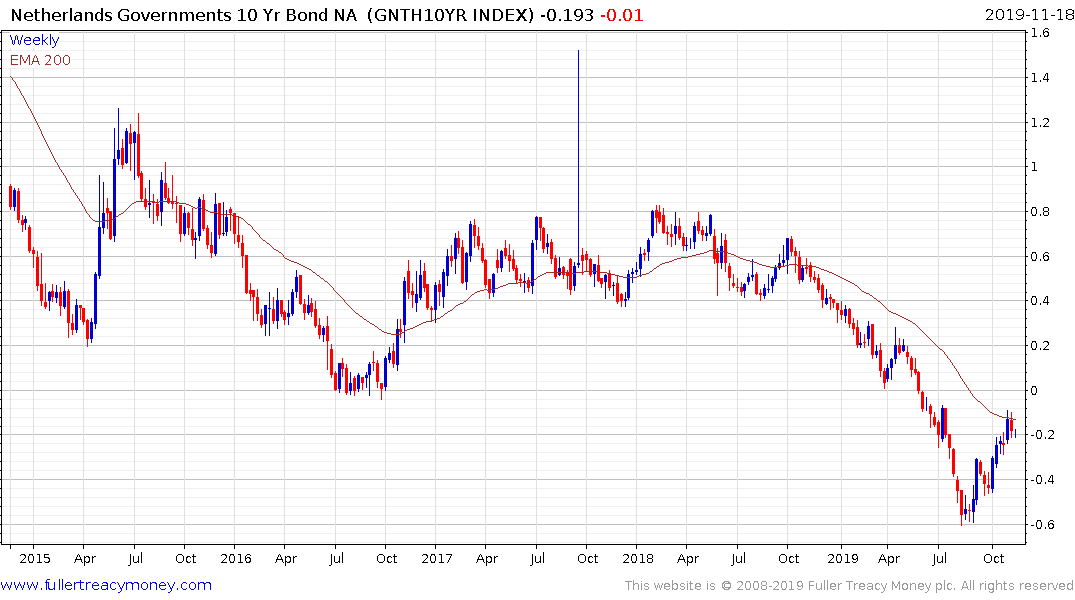 In a democracy it is hard to imagine where 2 million people are going to sit idly by and accept pension cuts because the rules governing how their money is invested are too stringent. Ireland forced through significantly higher pension contributions from public sector workers during the nadir of the credit crisis, as an emergency measure. That kind of action is unthinkable during an economic expansion and suggests the Dutch government is going to have to intervene for as long as it takes yields to move back above 0%. 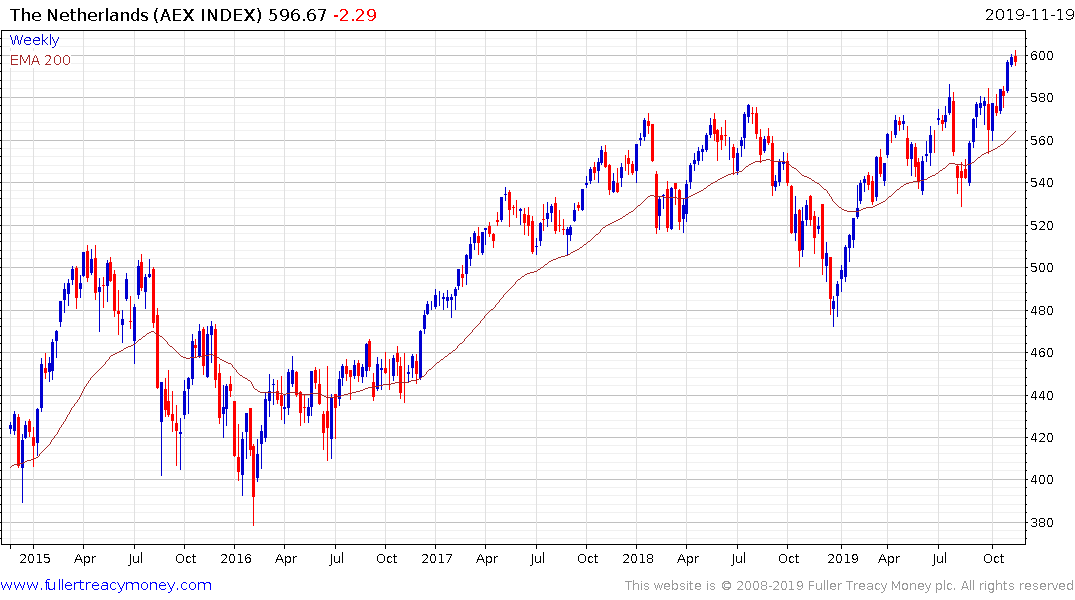 The cuts being suggested, although unlikely to implemented, are for private sector pensions. The AEX Index is not pricing in any risk of the pensions’ debacle impacting earnings as it continues to hold the breakout to seventeen-year highs. In fact, the negative interest rate environment is probably one of the primary reasons the stock market breaking on the upside, as investors chase a better real return.

The biggest picture is negative yielding bonds have a massive distorting effect on the pensions and life insurance businesses because they are the classic purchasers of bonds and tend to have low turnover. The surge in bond prices favoured speculators over savers and that process has been ongoing for most of the decade. The role central banks have played in exacerbating the feeling of inequality, finding voice in populist movements has not been fully explored but it does suggest there is likely to be more support for fiscal rather than monetary stimulus going forward.