Netflix has been warning for months that growth would slow after customers emerged from their Covid-19 hibernation, but few expected the company to stall so dramatically. The first quarter of 2020 was the strongest in its history, reeling in 15.8 million new customers, and Netflix’s pace was still brisk in the fourth quarter.

“We had those 10 years where we were growing smooth as silk,” Executive Chairman and co-Chief Executive Officer Reed Hastings said on a webcast for investors. “It’s a little wobbly right now.”

Netflix added 3.98 million subscribers in the first quarter, compared with an average analyst estimate of 6.29 million and its own forecast of 6 million. That marked the weakest start of a year since 2013, when Netflix added about 3 million customers. If the company’s forecast for the current quarter holds, it will be the worst three-month stretch for Netflix since the early days of its streaming service.

Netflix blamed a “Covid-19 pull-forward” effect, meaning the pandemic accelerated its growth in 2020 while everyone was stuck at home and needed something to watch. Now that surge is taking a toll on the company’s 2021 results.

“It really boils down to Covid,” Spencer Neumann, the company’s chief financial officer, said on the webcast.

Veteran subscribers will be aware I am not a fan of Netflix. It pioneered streaming but its content is a triumph of quantity over quality. That latter point matters as competition increases and that is particularly true as the established content creators enter the fray. 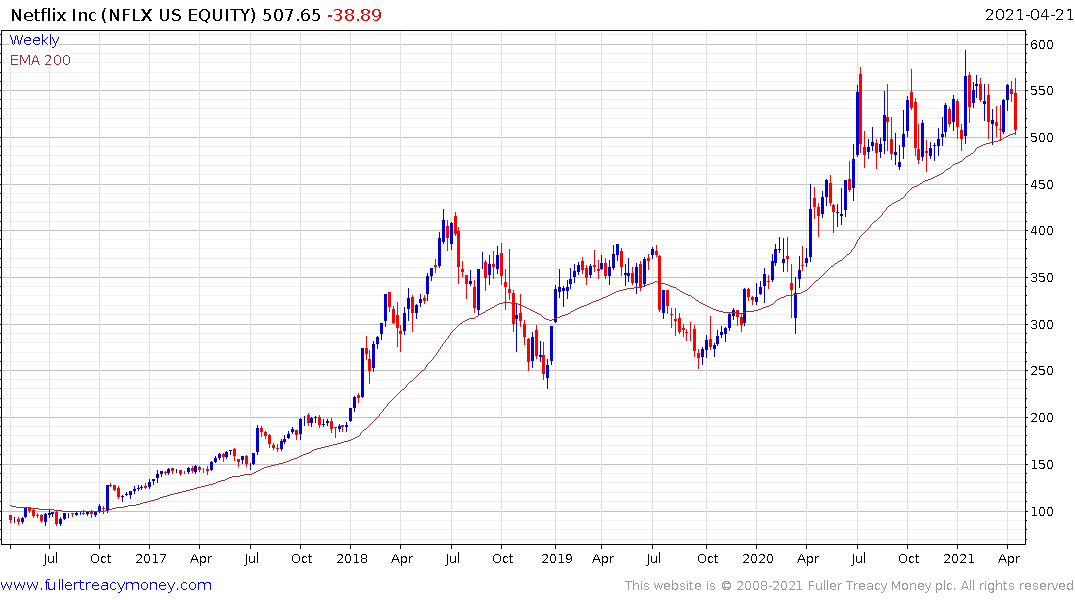 The bigger point for the stay-at-home champions is that they are suffering from exactly the same hangover as the tech stocks following Y2K. They pulled forward sales from years in the future in 2020. Anyone who wanted Netflix has probably already got it so they are totally dependent on Indian subscriber growth to supplement numbers of sales and those come in at a much lower price point.

The share has been ranging for nine months and the share is now testing the region of the trend mean and the psychological $500 level. This level might yet hold on the basis that the world is floating on a sea of liquidity but the business model is capital intensive and heavily dependent on interest rates. 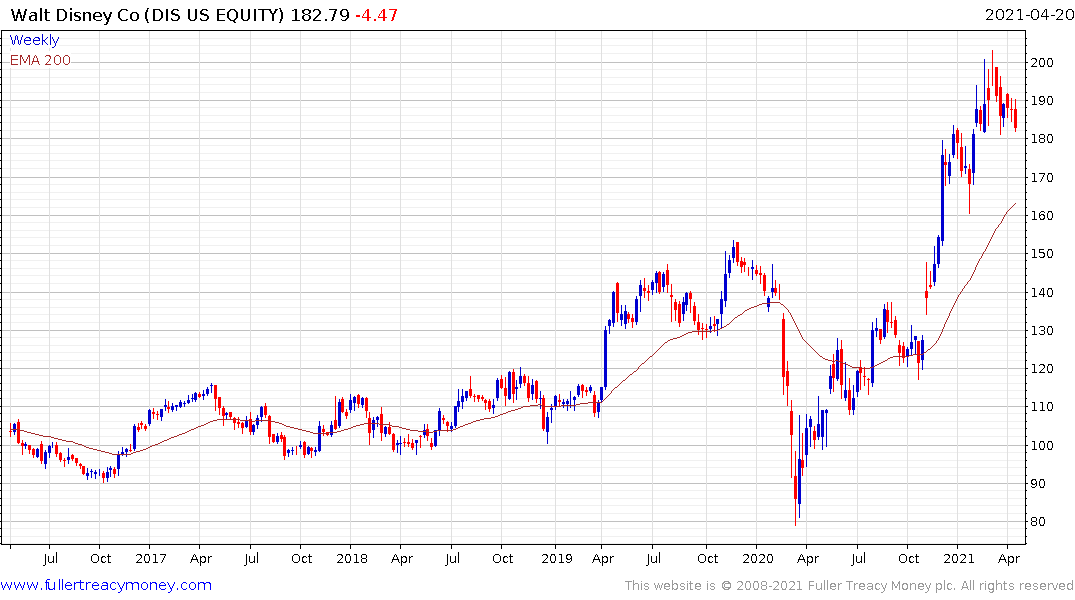 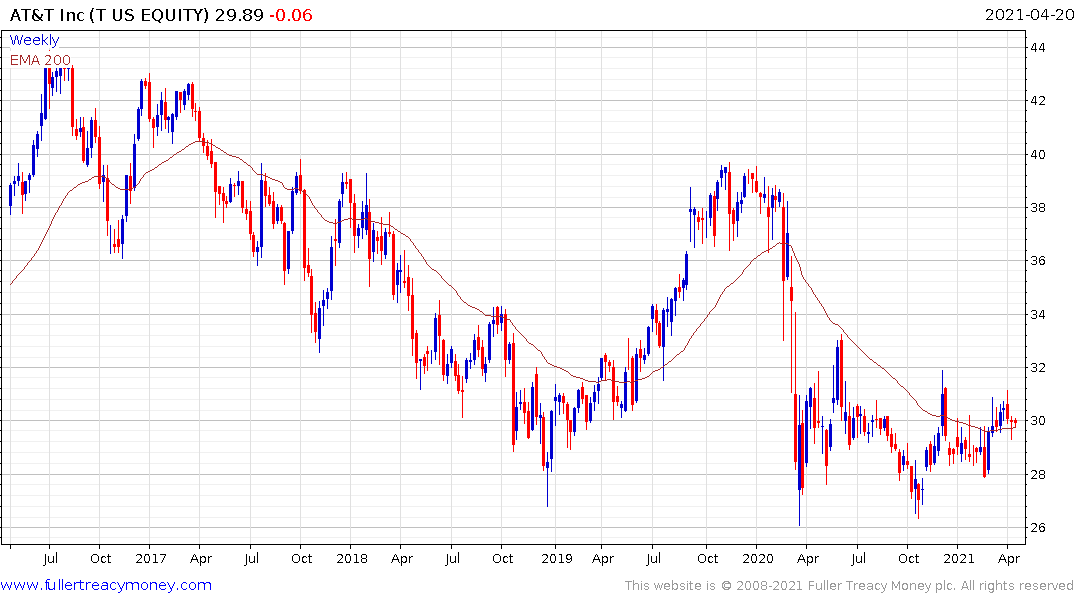 At the other end of the spectrum Disney and AT&T are outperforming and pay reliable dividends to boot. Disney may be susceptible to some consolidation but AT&T has base formation characteristics. 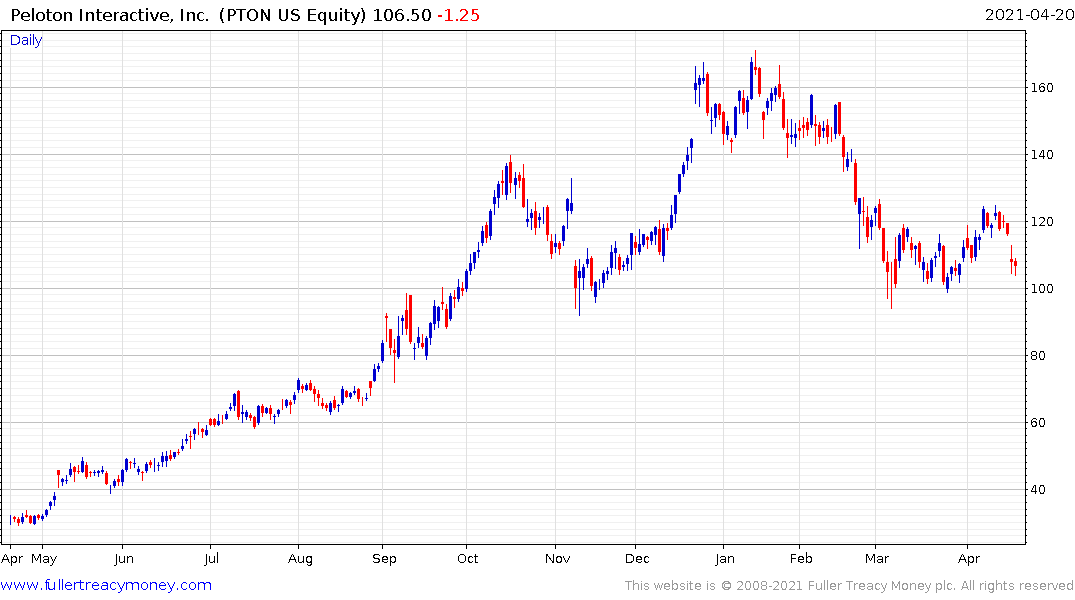 Another stay-at-home champion falling on tough times is Peloton. With its machines killing children it is at acute risk of a class action lawsuit even as sales are likely to wane as the economy opens up. The share is now falling below the trend mean. 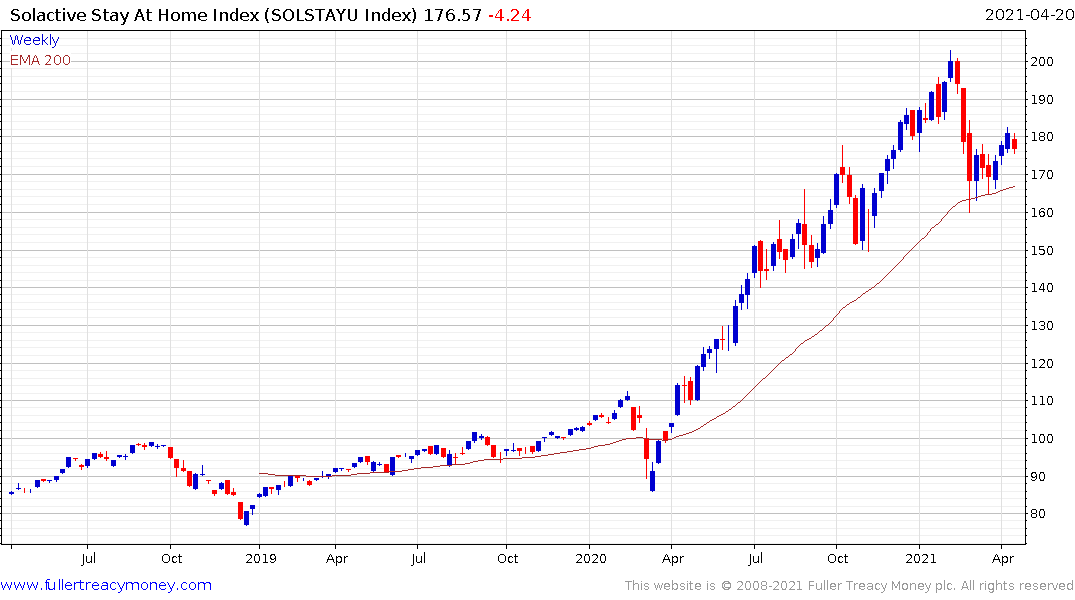 The Solactive Stay-At-Home Index is heavily influenced by the cloud computing sector. The correlation between cloud and the IPO ETF is not a coincidence. The majority of new tech companies outsource their back end to cloud computing data storage companies. 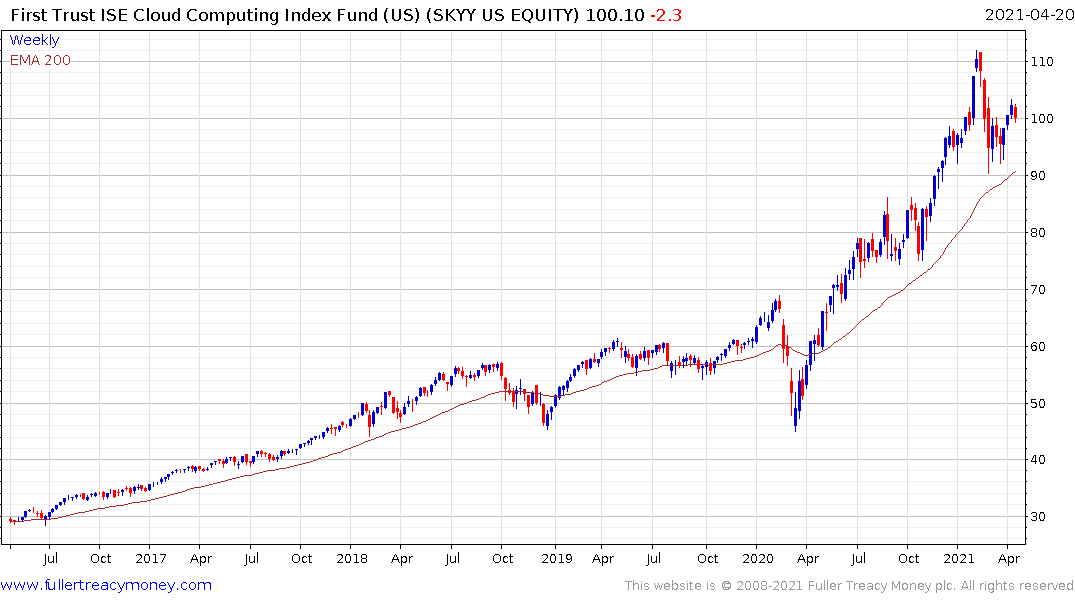 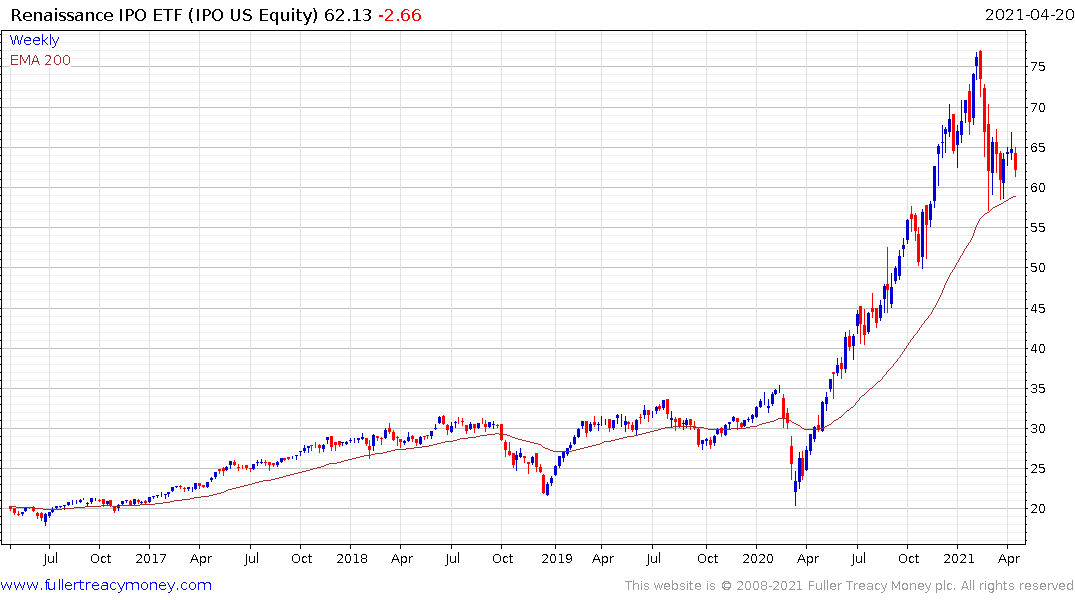 Therefore, as long as IPOs are doing well, the cloud sector will do well but the takeaway is that the values of the large cloud providers like Amazon, Microsoft and Google are intimately entwined with the success of lots of smaller customers. 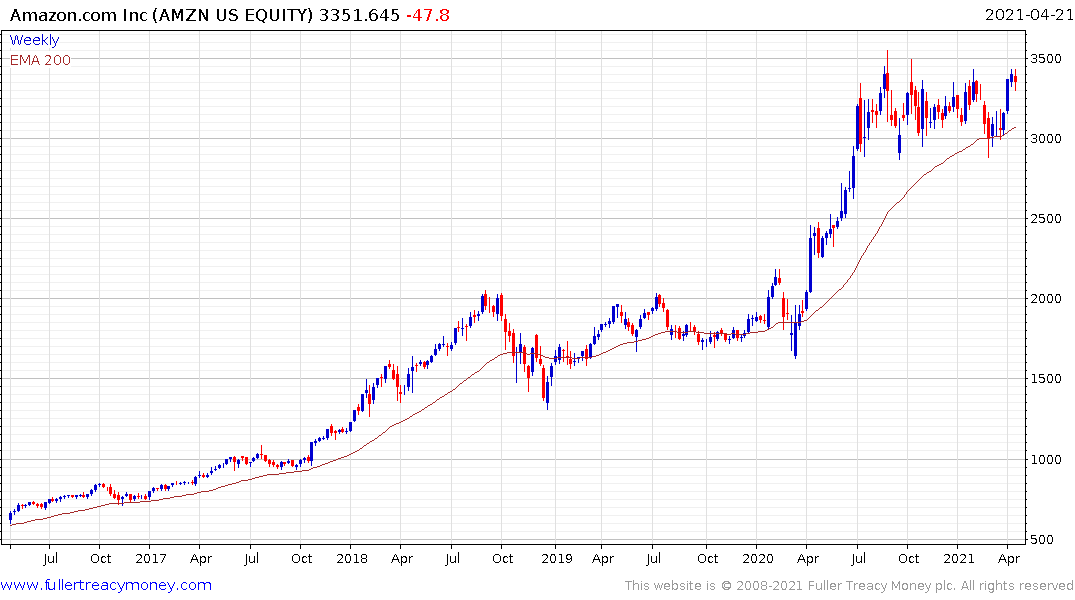 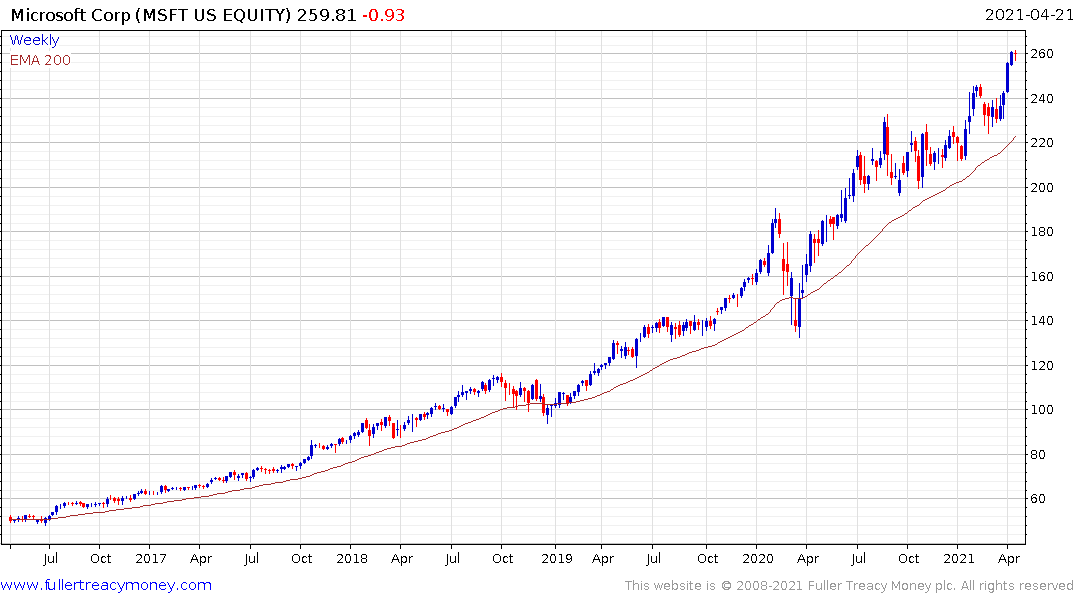 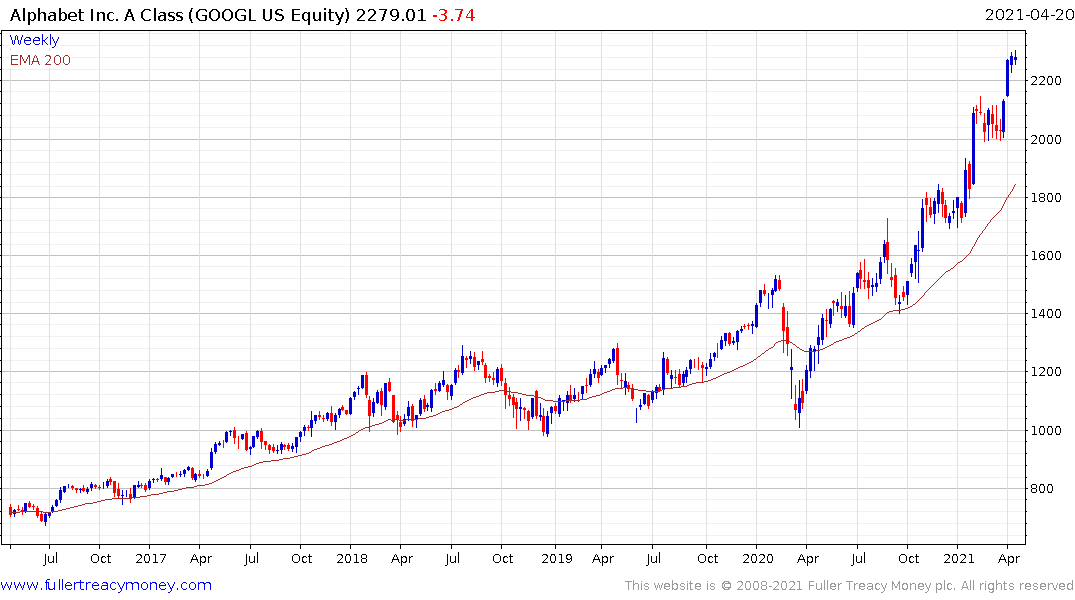