Musings from the Oil Patch
Comment of the Day

Musings from the Oil Patch by Eoin Treacy

In the Middle East, civil unrest in Iraq has resulted in its oil output falling by nearly 5% between December and January. The continued unrest prevents a recovery in output further straining the volume of oil reaching global markets. It has become clear that these oil production disruptions are supporting high oil prices. The Energy Information Administration (EIA) produces two charts that track the volume of unplanned crude oil outages. One chart tracks the outages from OPEC member countries while the other tracks those outages of non-OPEC member countries. We present the most recent versions of those charts in Exhibit 3 on the previous page and Exhibit 4 below.

What we see from the charts is that after a steady reduction in outages from non-OPEC countries during most of the second half of 2013, there has been a steady increase over the past three months. In particular, the change in trend has been largely due to increased outages in Sudan, Syria and the North Sea. In the near term, there will likely be little improvement in output from the first two countries, but the North Sea could see some improvement as we move into spring. The OPEC outage situation became worse during the second half of 2013 after being at a low volume of outages during the first half of the year. As of January 2014, OPEC’s production outage had climbed by nearly one million barrels a day since the summer of 2013 and now stands at about 2.25 million b/d. Coupled with non-OPEC outages of about 600,000 b/d, the total global crude oil outage is close to three million b/d, or about 3% of total global oil production, and that is before this latest production outage in Libya. If we examine the trend in Brent oil prices over the past 365 days, one can see how the price rose in response to the late summer OPEC production outage increases. The improvement in non-OPEC outages during the fall, coupled with little change in OPEC outages, contributed to a decline in Brent oil prices.

The focus of media attention remains on how likely Russia is to escalate its incursion into Ukraine, despite the calming of tensions today. What is perhaps more relevant from a market perspective is the background this situation is unfolding in. Civil unrest in a number of OPEC nations is contributing to losses of production which has resulted in a relatively tight environment for global oil markets. 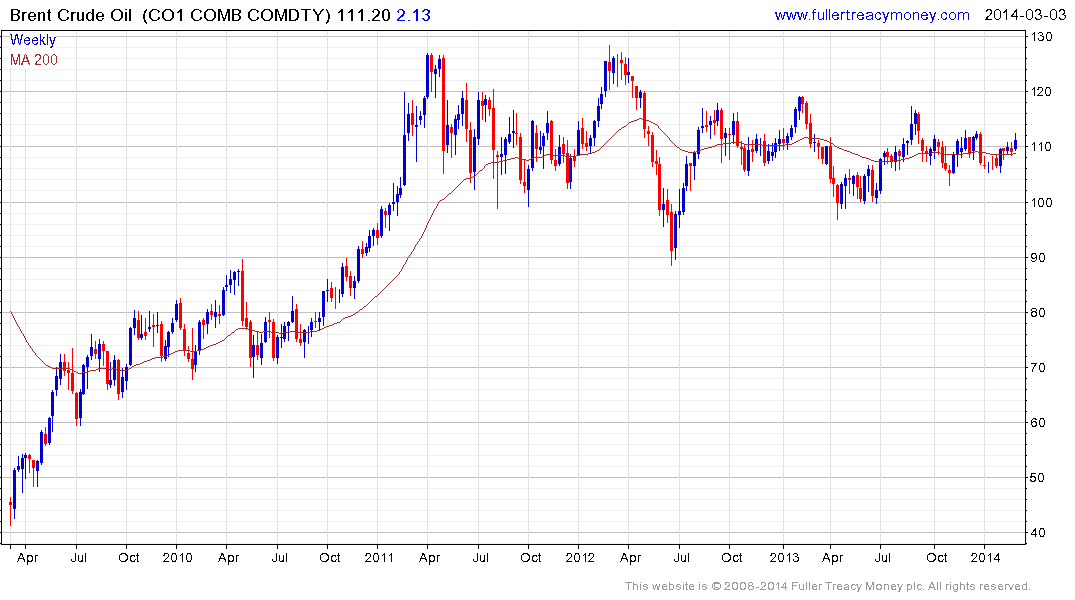 Brent crude has been largely rangebound since 2011 and the amplitude of the range has been getting narrower with the lower boundary rising to the psychological $100 level while $120 has represented an area of resistance since 2012. Saudi Arabia has made clear that it views $100 as the base level it is willing to accept and that area is also welcomed by unconventional producers as it ensures viable economic conditions for their operations. As such the market is susceptible to risks that could curtail supply. Given the importance of oil to the global economy, this is a market worth paying attention to. 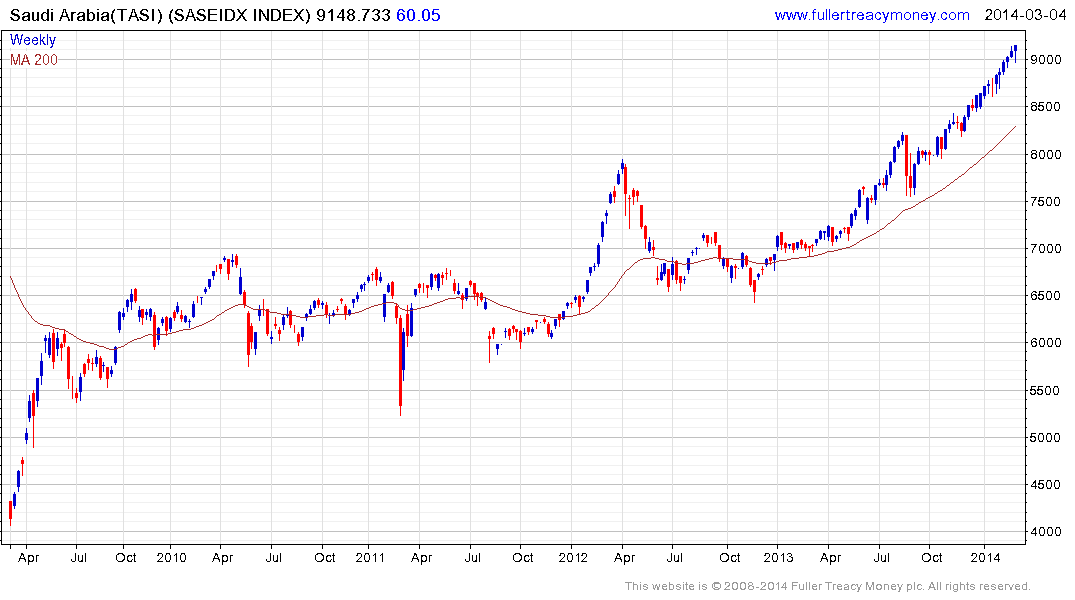 Saudi Arabia’s stock market continues to trend consistently higher. Easing tensions with Iran, persistently elevated oil prices and the fact that the GCC region was until relatively recently bypassed by international investors are all helping to boost appetites for equities. 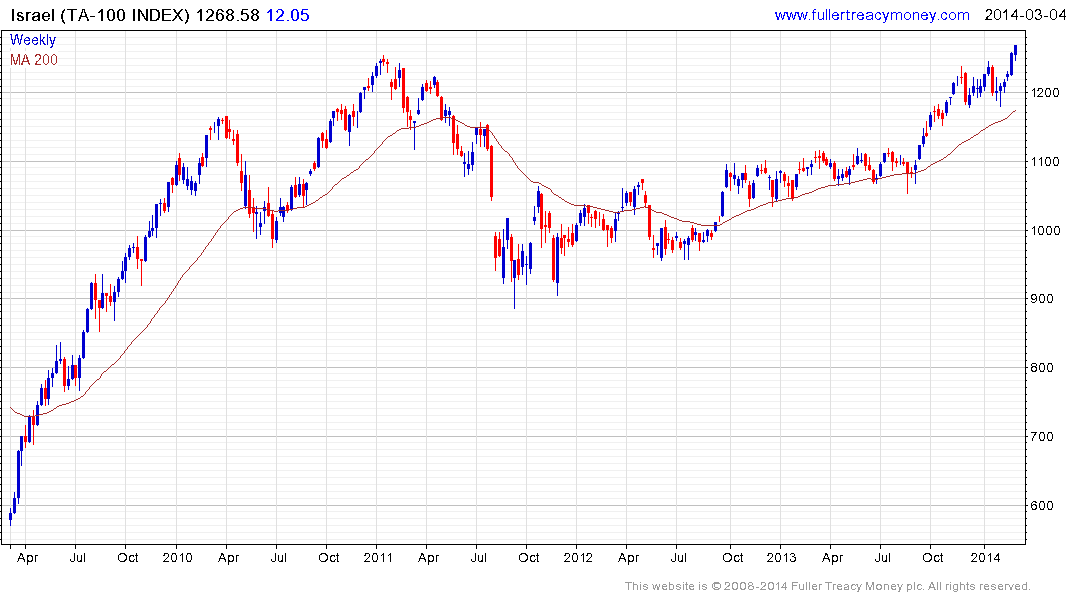 Israel is also benefitting from an easing of tensions with Iran. The Tel Aviv-100 Index broke out to new all-time highs today and is being led higher its healthcare sector. Both Teva Pharmaceutical and Perrigo are trending higher. 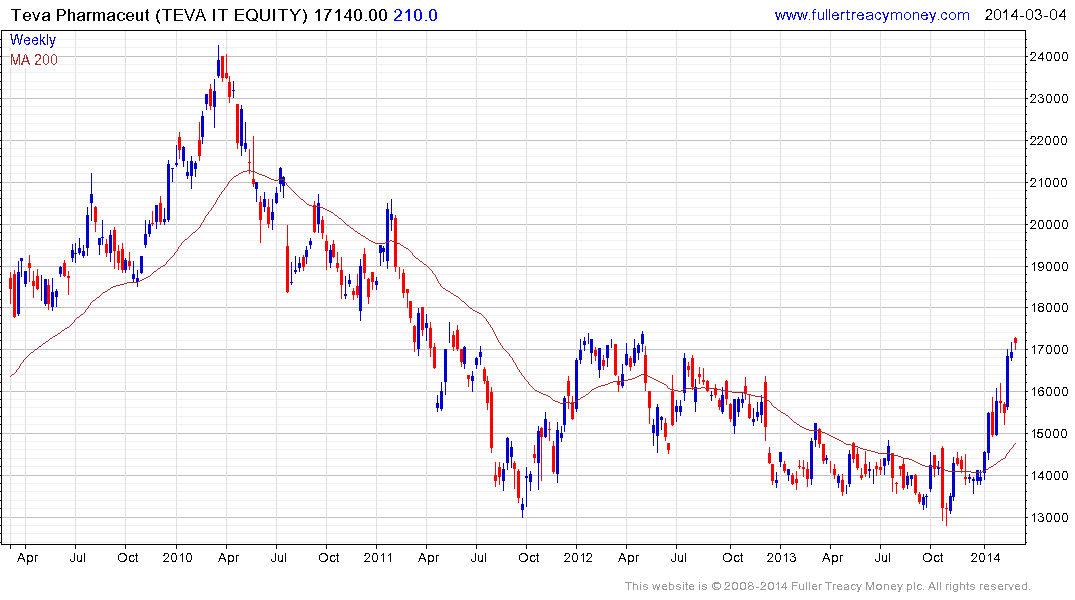 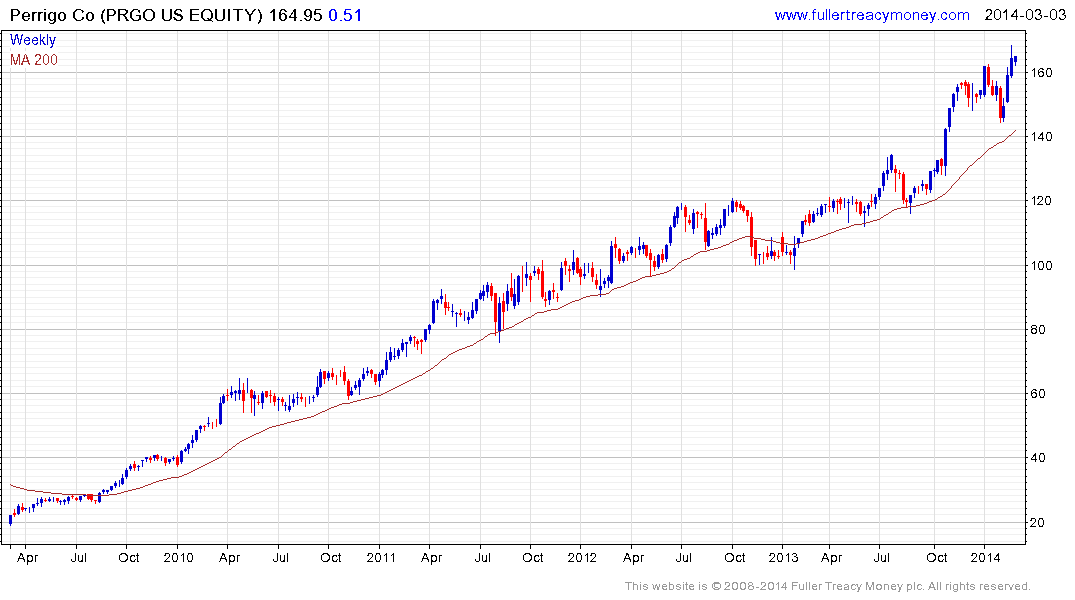