Musings From the Oil Patch March 3rd 2019 by Eoin Treacy

One of the more interesting points about scrubbers was that based on several studies, scrubbers on ships using high-sulfur fuel oil remove more than 98% of the sulfur oxides from the exhaust gases, resulting in emissions lower in sulfur oxides than those of marine gasoil, which is considered the benchmark for the IMO 2020 low sulfur regulation.  As a result, scrubbers are an approved compliance option for shippers to meet the IMO 2020 regulation by the IMO, European Union and U.S. Environmental Protection Agency.  This emissions performance supports why shippers have equipped well over 2,000 vessels with scrubbers and plan to add more.  Those decisions are based on the ship’s owners estimates of the capital and installation costs of scrubbers, the payback time based on projections of the cost differential between high-sulfur fuel oil and low-sulfur alternative fuels, and the anticipated remaining life of the ship.

Why is the EC rushing to get their proposal before the May IMO committee meeting?  No one seems to know for sure, but within two weeks of the draft proposal surfacing, the commission had taken the proposal to a one-day working party review and then submitted it to the IMO.  This speedy process became an end-run around the time that would normally be accorded to impacted parties to hold an open discussion and deliberation of the proposed rule’s impact.  The policy appears to represent a major departure from the existing rules.  Moreover, the policy seems to be based more on speculation than science.  All of this drama comes as the shipping and refining industries are in the final 11-month countdown before IMO 2020 becomes effective.  There remain many unknowns about how the shipping industry will deal with the fuel switch mandate, especially since they do not know exactly what fuel options will be available at each port worldwide.  Therefore, potentially foreclosing an option approved by regulators seems extreme, unless there is a clear health or environmental risk.  Whether it is possible for a uniform rule about wash-water disposal in ports, after some have declared that they will be banned, seems unlikely.  Therefore, the likely outcome appears to be a global ban on wash-water discharge in ports, further adding to the regulatory nightmare IMO 2020 is creating for the shipping industry, let alone the possibility of safety issues if ships are forced to switch fuels at sea.

Shipping is a greater emitter of pollutants than ground transportation in absolute terms. That is the primary drive behind improving emissions standards and is likely to have an impact on oil prices and refinery profitability when it goes into effect. 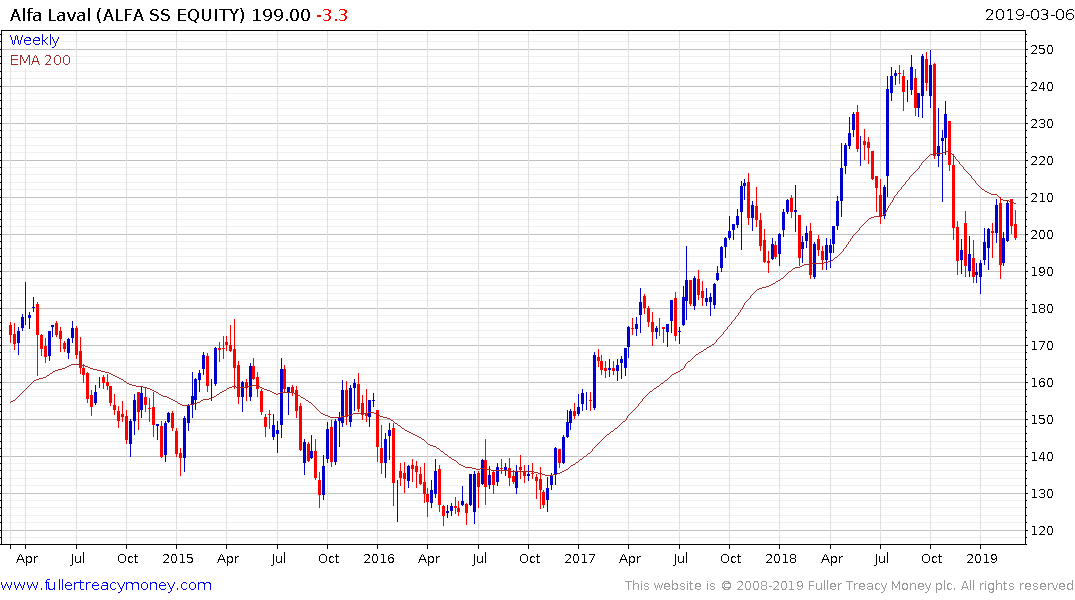 The above report highlights the fact that the majority of retrofitting for the shipping sector has already been completed. Alfa Laval is the biggest producer of emissions scrubbers. The share trended higher in an impressively consistent manner until October, but dropped to break its uptrend in November and is now encountering resistance in the region of the trend mean. A sustained move back above the 200-day MA will be required to question medium-term scope for continued weakness.