Musings from the Oil Patch March 21st 2019 by Eoin Treacy

During the lead up to the tobacco agreement, many of those protesting against those companies pressured pension and endowment funds to divest their tobacco shares on the basis that the legal risks these companies carried had the potential to bankrupt them.  The playbook these protestors were pursuing was similar to the pressure investors had utilized in the apartheid divestment campaign.  One active participant in the tobacco divestment was the California Public Employees' Retirement System (CalPERS), which elected to sell all its tobacco stocks.

A study in 2016 by Wilshire Associates, which advises CalPERS on its investments, said the fund has forfeited an estimated $3.04 billion in profits since it sold off its tobacco holdings in 2001.  At the time of the study, the fund was considering possibly banning investments in the coal and firearms industries, as well as companies doing business with Sudan and Iran.  With respect to the tobacco investment, according to Joe DeAnda, a spokesman for CalPERS, “The thinking was, ‘Hey, maybe we should get out now, ahead of

further decline in the industry.  That (decline) didn’t happen.”  The question is whether divestment of oil and gas stocks might prove to be a similar lost-income opportunity.

The issue of ESG investing, which has been percolating for the past decade, raises the question of whether it leads to improved returns compared to an unrestricted investment portfolio.  Because ESG are not clearly defined terms, almost every study is suspect to cherrypicking the stocks included in portfolios.  Several recent studies have attempted to isolate the returns of an ESG selection criteria by focusing on a factor analysis impacting the stocks.

It stands to reason that by excluding a sector for reasons other than what might be considered strictly financial it increases the potential for that sector to outperform later. By flushing out holders selling for what they perceive as ethical reasons, it returns the price to a value stage where the potential for future outperformance is bolstered.

Tobacco was a good example of that until competitive forces arose from vaping which is arguably now being co-opted. The big question is whether fossil fuel stocks represent a similar condition since they are being shed by sovereign wealth and pension funds. I suspect that is going to depend on whether the firms in question will avoid spending vast sums on questionable assets. 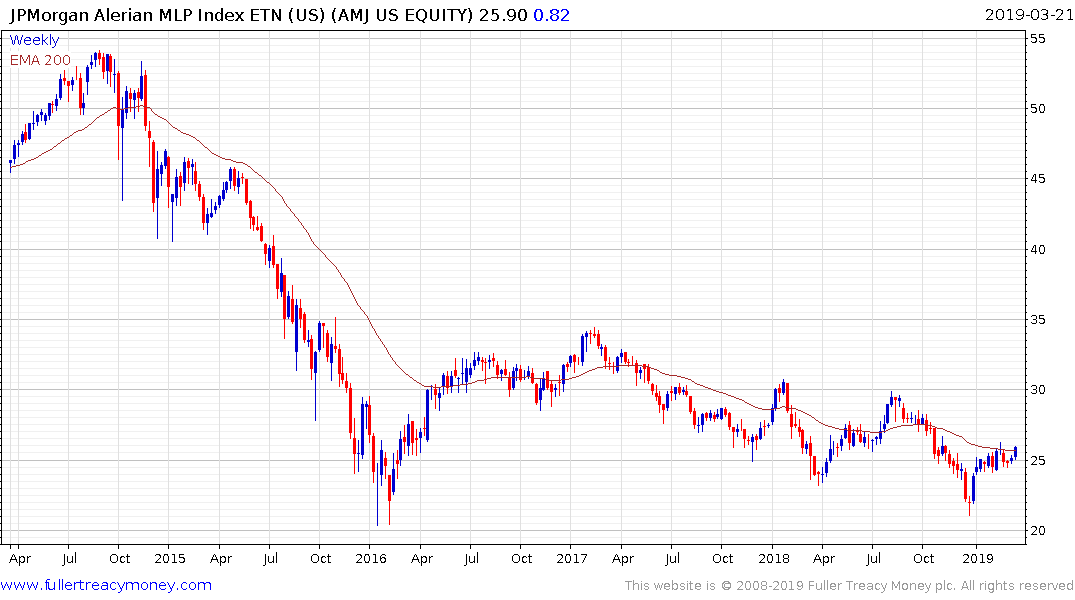 The USA’s impending position of full energy independence is a strong point in favour of domestic plays. The Alerian MLP ETF has now rallied to challenge its progression of lower rally highs.