Musings From the Oil Patch January 30th 2015 by Eoin Treacy

What is most interesting is the consistency in long-term demand growth since 1989. As shown on the chart, for the decade 1989-1999, demand grew on average by 900,000 barrels a day. For the overlapping decade of 1994-2004, average demand grew 50% faster, or an average rate of increase of 1.45 million barrels a day. That period was marked by 2004’s dramatic increase along with healthy growth during the last half of the 1990’s. When we calculated the average demand growth for 2000-2014, it was at an annual average rate of 950,000 barrels a day. This means that last year’s demand grew by only two-thirds of the historical growth rate. This year’s growth will come close to matching the long-term average, however, that forecast was made before the International Monetary Fund (IMF) cut its global economic growth estimates for 2015 and 2016 by 0.3 percentage points, respectively. The problem is that if industry planners were anticipating growth more like that experienced over the 1994-2004 decade, then demand is falling well short of expectations. What we know about this year’s energy demand forecast is that it will continue to be buffeted by the cross-currents from the demand stimulus as a result of lower oil prices and reduced economically-driven demand from around the world.

In our view, much of the world’s energy business for the past decade has been driven by an extrapolation of the demand trends established in 1994-2004. The financial crisis and recessionary period presented a brief interruption in that healthy growth trend. Population growth, rising living standards and cheap capital, curtesy of easy monetary policies around the world, stimulated significant growth in oil drilling and production that contributed to the current supply growth. Lack of demand continues to play a greater role in the weak oil prices of today than many are willing to acknowledge. That imbalance between demand and supply is not particularly large – maybe 1.5 million barrels a day, although supply is growing while demand is lagging. Saudi Arabia knows it needs a healthy global economy to spur long-term oil demand growth and thus lift global oil prices. How long will it take to re-establish this growth? Saudi Arabia said it was prepared to live with low oil price for up to two years. Fundamentals, however, should shorten that time frame.

A 60% cut in the price of oil will reignite demand growth. However prices will not rebound in any meaningful way until demand has recovered sufficiently and supply has been pared back so that the market returns to relative equilibrium before reversing. The motives of the Saudi Arabians in holding production steady in a supply dominated environment will be cause of continued debate but until they decide to alter their strategy the market will be susceptible to weakness.

As with any major decline analysts tend to extrapolate the trend and become progressively more bearish as prices fall.  However where oil finds support will be heavily influenced by the ability of shale oil producers to sustain production at lower prices. 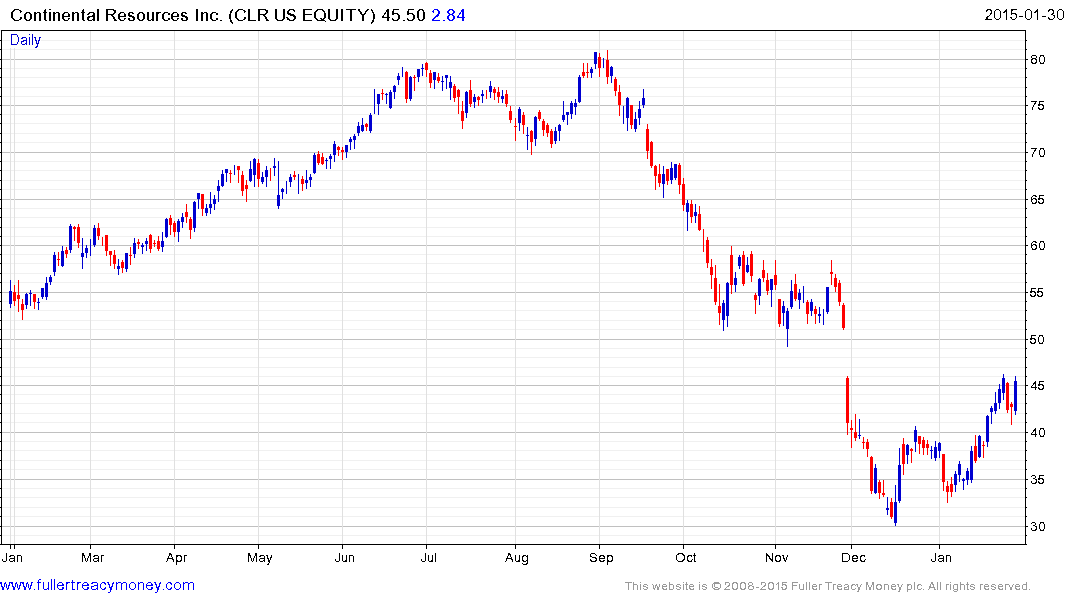 For example, Continental Resources, a major US onshore producer, today said they are economic at $45. This may be bravado but the share has bounced over the last couple of weeks suggesting the $30 area is offering at least short-term and potentially medium-term support. 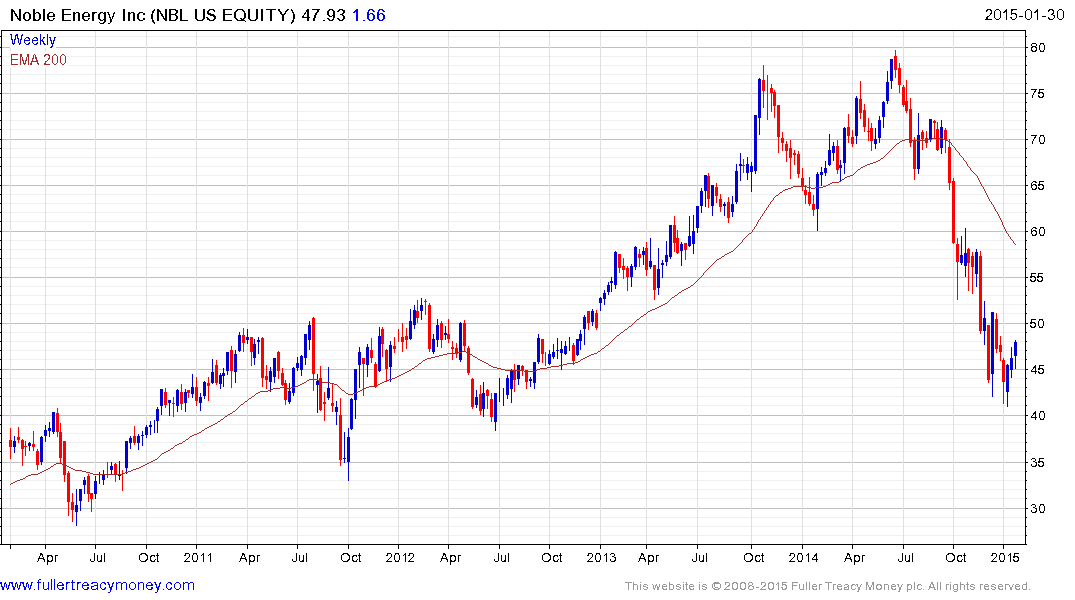 Noble Energy failed to hold the move to new lows earlier this month and continues to show a loss of downward momentum. 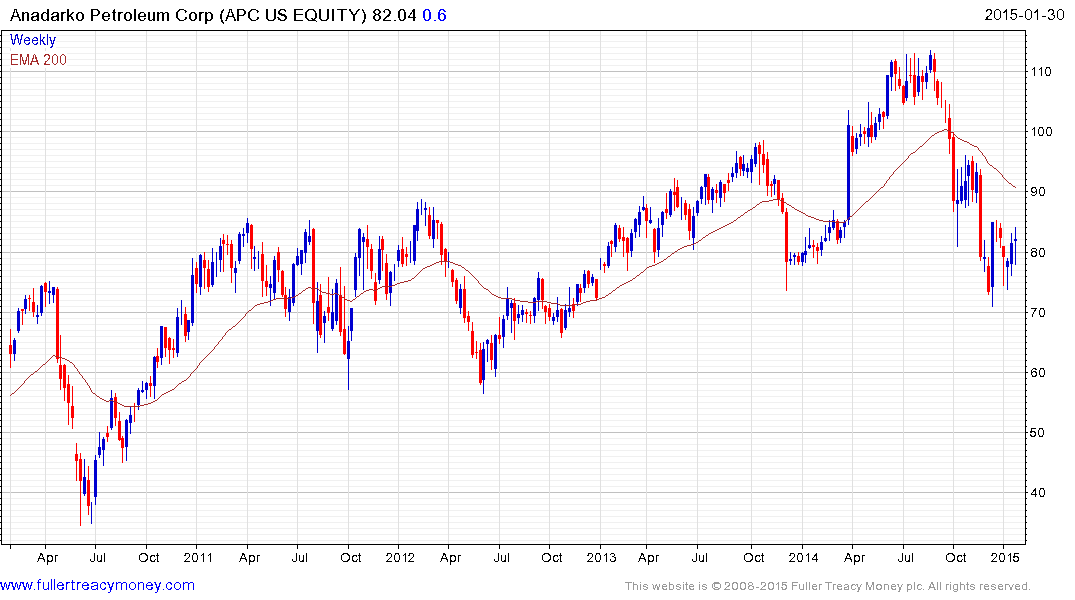 Anadarko posted a large upside weekly key reversal in December and continues to hold above that low. 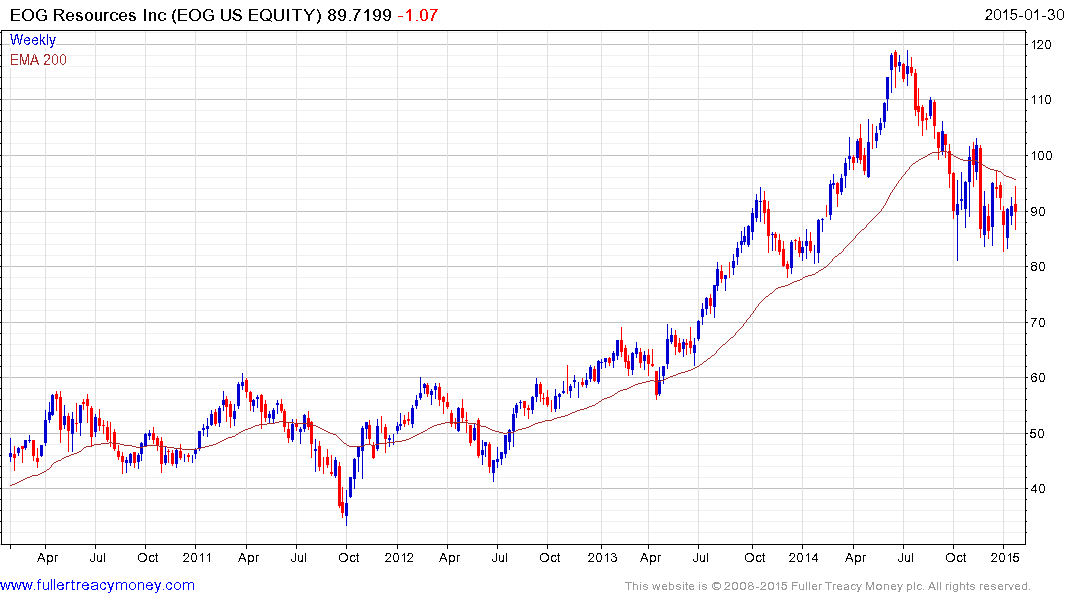 EOG Resources has been a relative strength leader and continues to stabilise above $80. 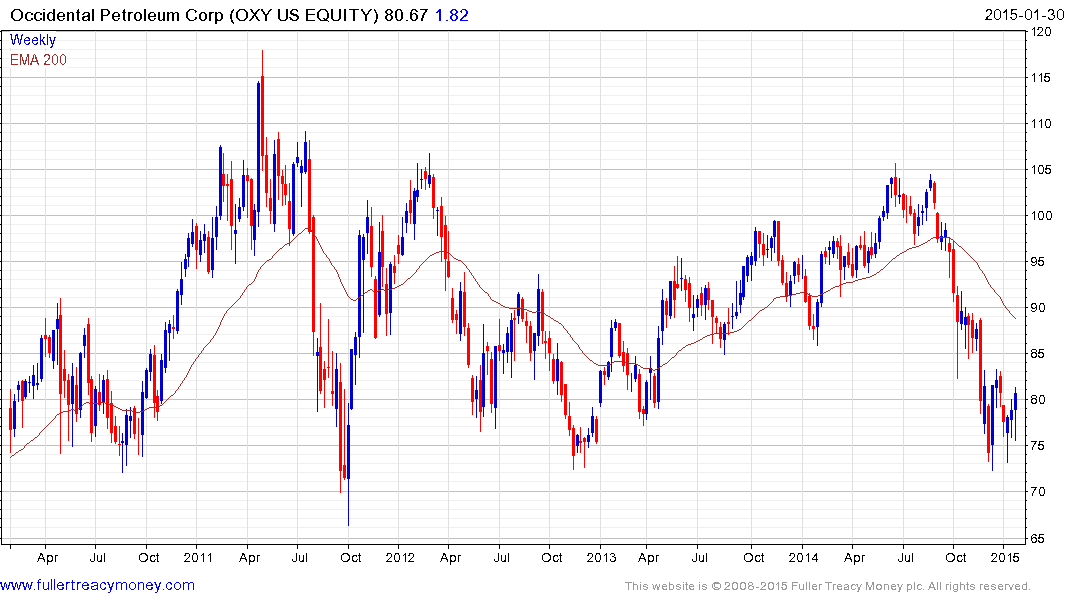 Occidental continues to stabilise in the region of the lower side of its five-year range.

These are all important shale oil producers and they have not followed oil lower over the last month. Weaker players have continued to trend lower. At the present time Brent Crude is exhibiting relative strength compared to West Texas Intermediate. 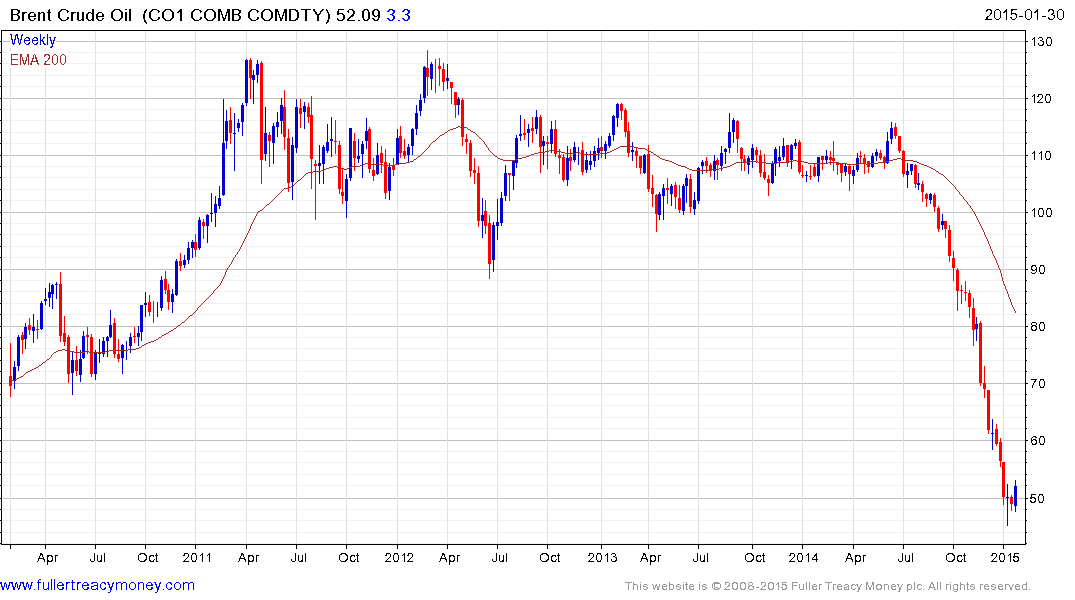 Today’s $3 rally takes Brent to its largest rally since June and may act to pressure short positions. This is a pivotal area because a failure at this level would increase the potential for a resumption of the downtrend while a rally may be the catalyst required to reignite bullish interest. Valuations have certainly become more attractive subject to oil prices stabilising and potentially rallying.