AMC said Tuesday it sold stock to Mudrick with plans to “go on offense” for acquisitions. The agreement with New York-based Mudrick was for 8.5 million shares of common stock at $27.12 apiece. The stock purchase came with the assurance that the shares would be “freely tradable,” meaning the firm could sell the shares at any point or in any amount it chose.

Debt holders have also benefited from the recent equity rally. Some of its junk-rated second lien bonds due 2026 that were trading as low as 5 cents on the dollar in November are now close to face value, and quotes on its senior subordinated notes maturing in 2027 jumped about 4.5 cents Tuesday to almost 80 cents.

Mudrick has made big bets on AMC in the past, helping the movie theater chain as it pushed through the pandemic. In January, the firm agreed to buy $100 million of new secured bonds in exchange for a commitment fee equal to about 8 million AMC shares. The agreement also called for Mudrick to exchange $100 million of AMC bonds due 2026 for about 13.7 million shares.

Kudos to AMC’s management for making ample use of its shelf listing to milk investors for additional capital. Quite what going on the offensive means is another question entirely. Content creators are increasingly choosing to go straight to streaming. When they do choose to show movies in theatres the interval before streaming is shorter. Cinema might be a shrinking market but the company will at least survive long enough to increase market share. 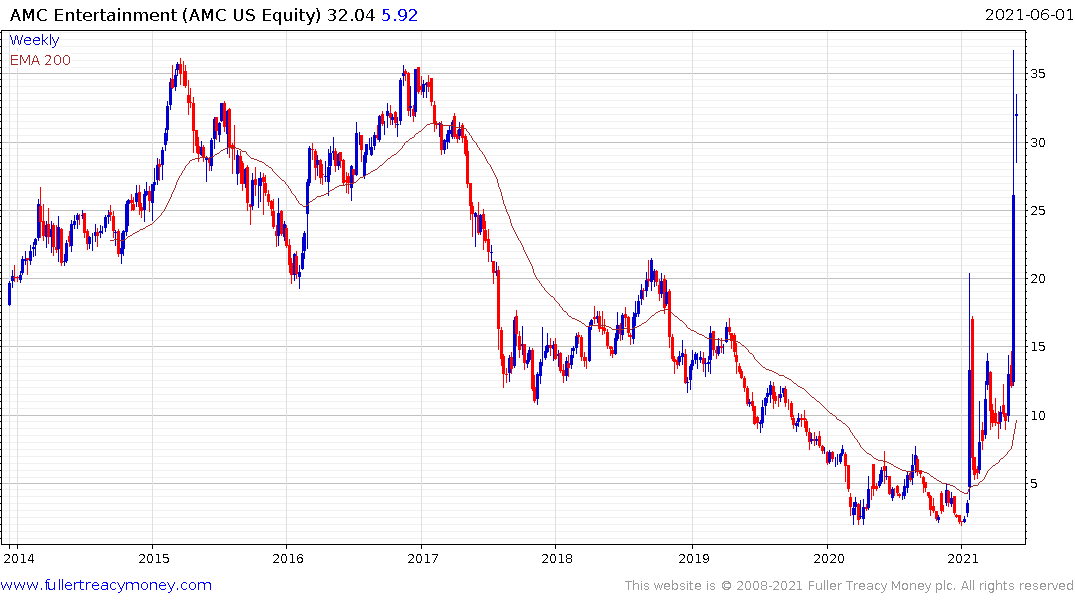 Mudrick did well on a quick trade to sell instantly appreciated stock. The comment that the shares are now overvalued begs the question whether they are now short. AMC is now back in the region of the 2015 through 2017 peaks. Regardless of the retail froth in the market, the argument AMC is worth its $15 billion market cap is tenuous at best, even if there is little evidence just yet that the acceleration is over.