Meanwhile, the earnings season so far has failed to assuage growing pessimism about the macroeconomic outlook. Goldman Sachs Group Inc. strategists said Monday that guidance for the months ahead has been “disappointing,” as only one S&P 500 company -- Micron Technology Inc. -- has both beaten earnings estimates and raised its outlook.

Markets are increasingly concerned that a more hawkish shift from the Fed could hit earnings growth, Goldman strategists led by David Kostin wrote in a note. “Investors will require a catalyst in the near-term to add length, but few obvious catalysts are evident in the near-term,” they said.

We have described this bull market as liquidity fuelled since 2009. Nothing has changed to question that assumption. The reality of tapering and the threat of rate hikes and quantitative tightening are weighing on asset prices from cryptocurrencies to unprofitable innovation companies. Many of the world’s largest companies are now also feeling the pain.

The Treasury is rebuilding its cash balance. That’s the equivalent of taking $600 billion out of circulation in less than a month. Ultimately, that money will be spent, since governments are not in the practice of building reserves. However, as long as the US government is siphoning hundreds of billions out of the economy, it detracts from capacity to increase leverage. This is quantitative tightening by other means. 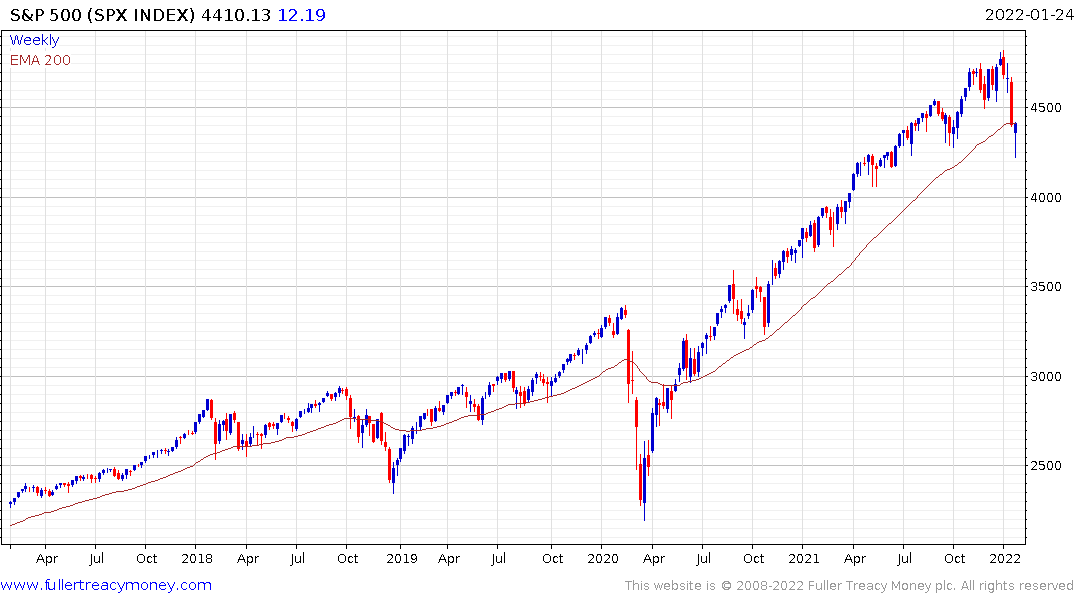 The S&P500 has medium-term Type-2 top formation completion characteristics and broke its sequence of higher reaction lows today. A massive reaction against the prevailing trend is the conclusive characteristic for this formation. It is quite normal to have a period of ranging follow because some investors will view the steep decline as a buying opportunity.

At a minimum, the Index will now need to sustain a move above the trend mean, and ideally above 4500, to signal a return to demand dominance beyond scope short-term steadying. 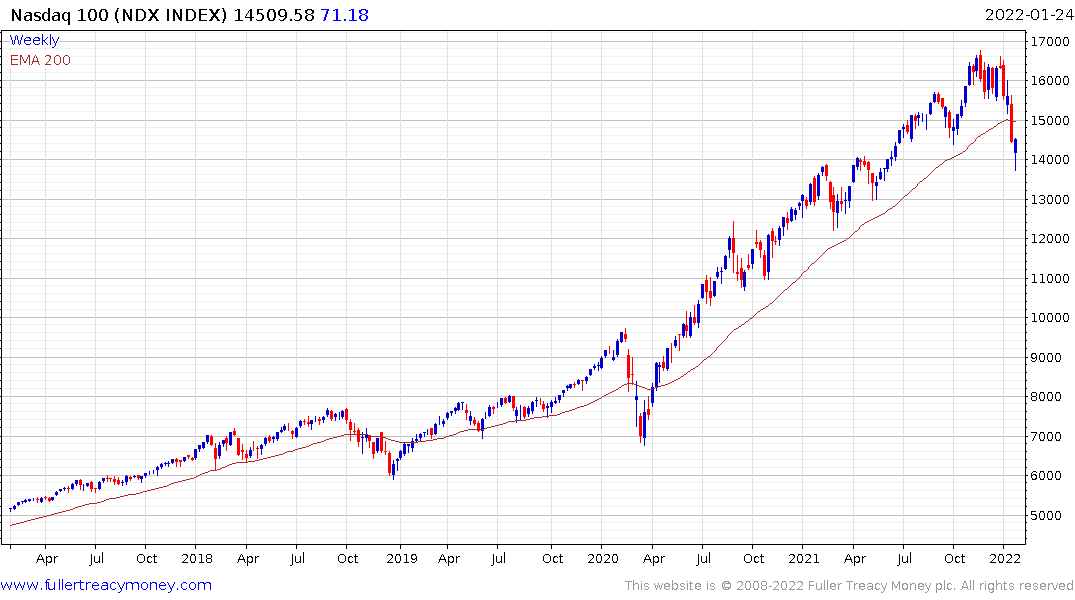 The Nasdaq-100 has a similar pattern, has been leading on the downside and bounced today. 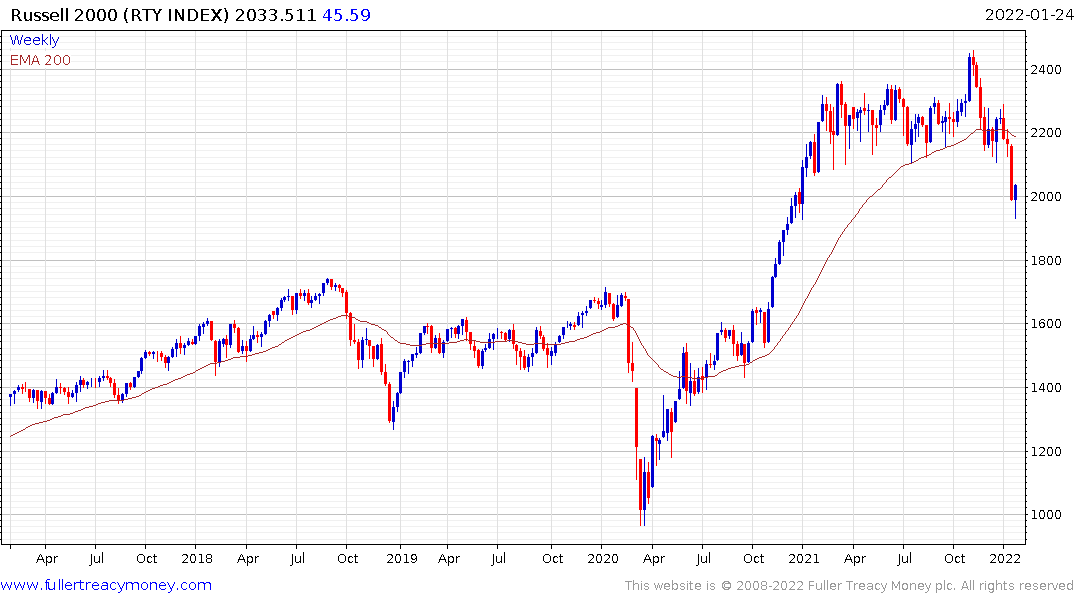 The Russell 2000 has rapidly unwound most of its overbought condition relative to the 1000-day MA and showed the first signs of steadying today. 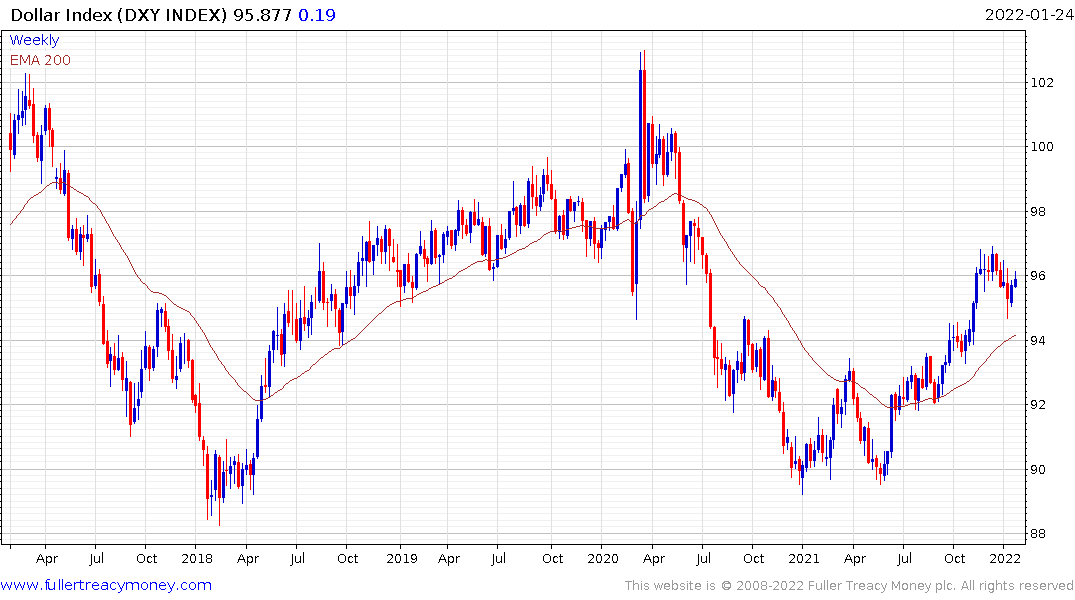 The Dollar continues to rally as investors increase their cash holdings. Ultimately, this recovery will have difficulty being sustained since stock market volatility will sap appetite for interest rate hikes. 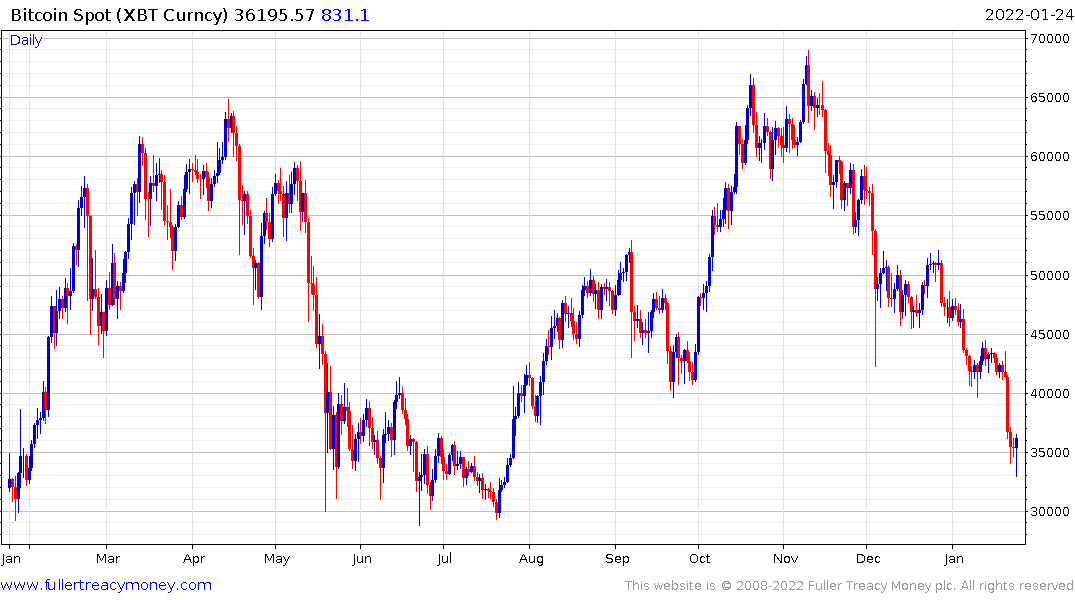 Bitcoin paused today following a halving from its November peak. A sustained break back above $40,000 is the minimum required to question the consistency of the downtrend.