In addition, the central bank recently cut policy interest rate by 25bps to 6.0%, the first cut since October 2017. This would reduce cost of funds, increase liquidity, and support growth in consumption and investment—which together account for around 100% of GDP.

For the rest of the year, the economy will face challenges from a high-base GDP growth rate and rising external pressures from slowing global trade and the US-China trade war. However, Vietnam has resilient domestic demand and authorities have helped to support demand by cutting key interest rates. Hence, we forecast Vietnam’s economic growth at 6.6-6.8% for this year.

The trade war between the USA and China represents a clear signal that China is quickly pricing out of the low-end manufacturing sector. This is a trend which has been underway for some time but it is now gathering pace as the both the cost of doing business and the geopolitical risk increase. 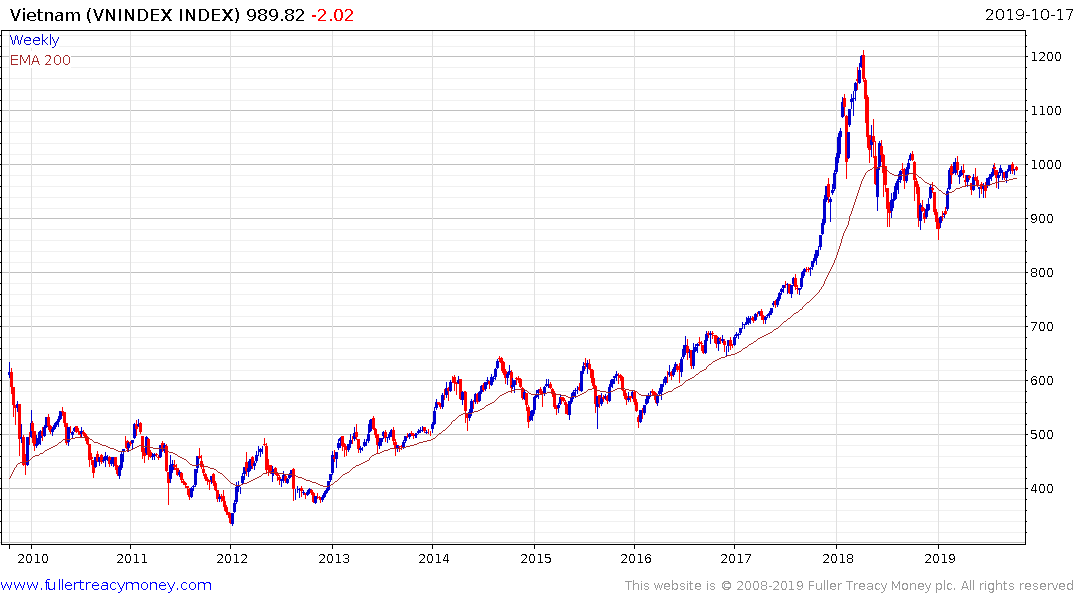 All other factors being equal, rising growth rates and lower interest rates are generally a recipe for expansion in speculative activity which favours the stock market. Vietnam’s stock market has been confined to a narrow range for much of this year between the trend mean and the psychological 1000 level. It needs to sustain a move above that latter area to confirm a return to demand dominance. 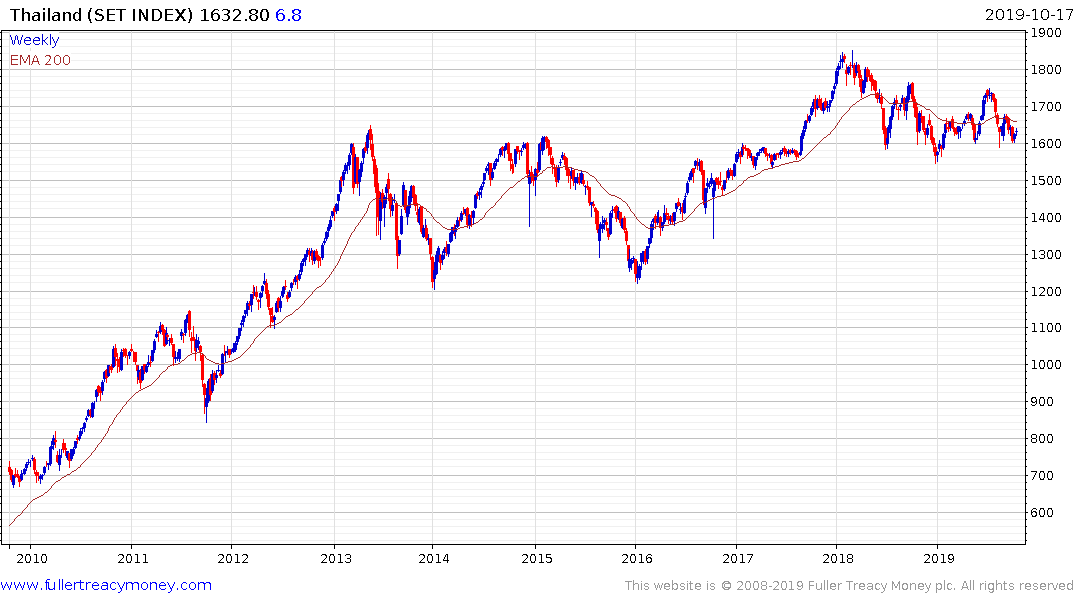 The Thai Index continues to pause above the 2013-17 range and is currently steadying from the psychological 1600 level. 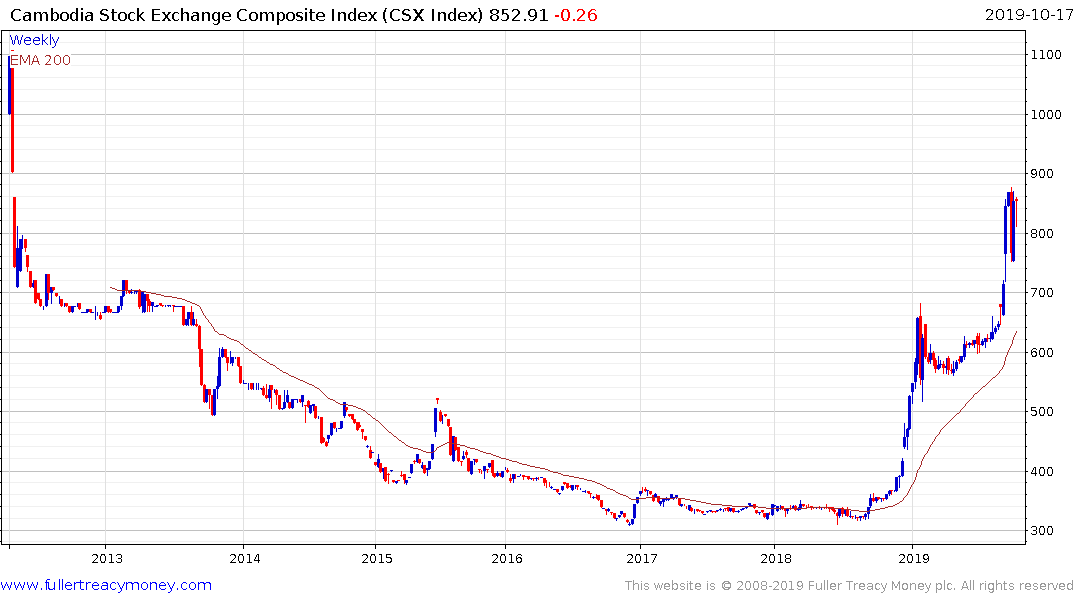 The Cambodian Index rallied to break its downtrend late last year and has done spectacularly well this year. The current reaction is relatively similar sized to that which too place in January and a sustained move below 750 would be required to question medium-term consistency of the trend. 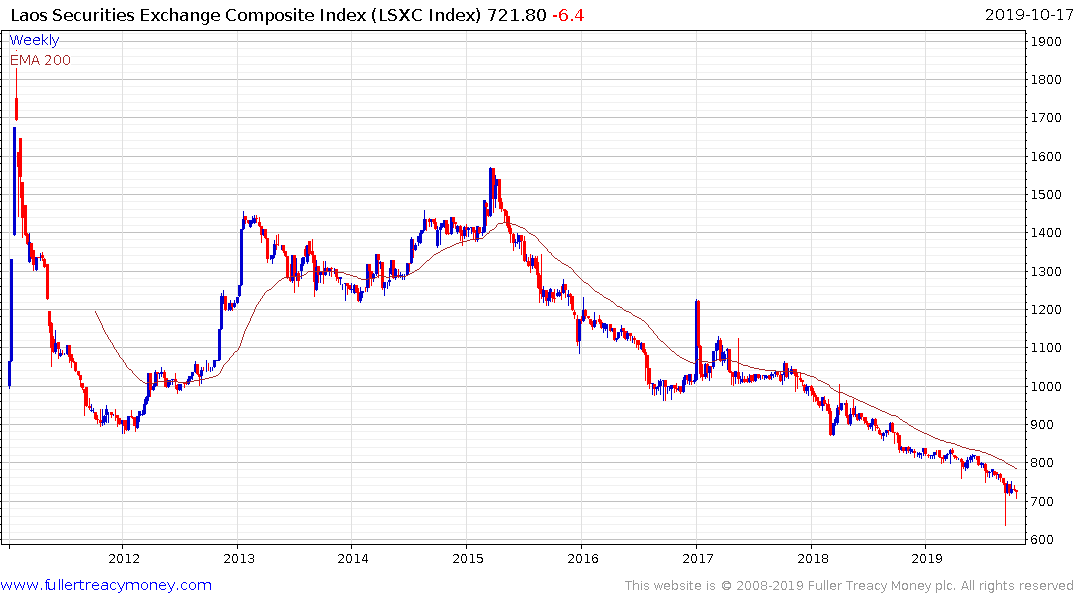 The Laos Composite Index has been trending lower for years but the downward spike in September looks climactic. A break in the sequence of lower rally highs would confirm a reversal.

The Luxembourg listed Knight Mekong Fund has a backend load of 5%, management fee of 2% and performance fee of 20%. It invests in public and pre-IPO companies in the Mekong region of Vietnam, Cambodia, Laos, Myanmar and China’s Yunnan province. The fund remains in a consistent uptrend. I don’t know of a retail fund that investing in these small illiquid markets.