Asset managers have been trying to persuade regulators to green-light bitcoin ETFs for nearly 10 years. So far, the SEC has rejected or delayed a decision on the funds. The regulator has taken a cautious approach to regulating the volatile crypto market. The digital assets have boomed in popularity with amateur traders and a growing number of professional money managers.

Speaking at the Aspen Security Forum, Mr. Gensler said issuers who structure ETFs under the Investment Company Act of 1940 would help protect investors from illicit activities. The decades-old law is a more stringent set of guidelines that usually apply to mutual funds. For example, it requires an independent board and gives a fund the ability to stop accepting new money -- something most ETFs can't do.

"I look forward to the staff's review of such filings, particularly if those are limited to these CME-traded bitcoin futures," Mr. Gensler added. CME Group Inc.'s bitcoin futures contracts started trading in late 2017.

Unlike crypto exchanges, trading venues such as CME have agreements with the SEC, giving the regulator greater oversight.

Despite the additional safeguards, investors in such funds would have to deal with issues associated with trading futures, as well as the risks around cryptocurrencies.

Todd Rosenbluth, head of ETF and mutual-fund research at CFRA, warned that futures-based ETFs rarely replicate the performance of the underlying market they track. The reason is pricing fluctuations between futures contracts and the spot market, especially if demand for the asset or commodity is expected to change significantly in the future. There are also costs associated with rolling over contracts when they expire.

"It's likely that some of the investors who gravitate toward these products will either be disappointed in the performance or unaware of the risks they are taking," Mr. Rosenbluth said.

Futures based ETFs do not typically adopt sophisticated measures to tackle control roll costs. That leaves them open to be exploited by short sellers when the predictable contract expiries occur and contributes to their underperforming the market. The US Oil Fund’s dismal performance relative to the oil prices is a good example of this tendency.

The only time futures-based ETFs tend to make money is when they trend and the backwardation is in their favour. At present bitcoin is recovering and trading in contango right across the curve. That suggests futures funds will underperform the price by whatever percentage differential is between the contracts.

The near-term bullish point is that the impending potential explosion in demand for futures will reintroduce leveraged trading as a significant component of the bitcoin trading environment. That is positive for the price and has contributed to today’s breakout. 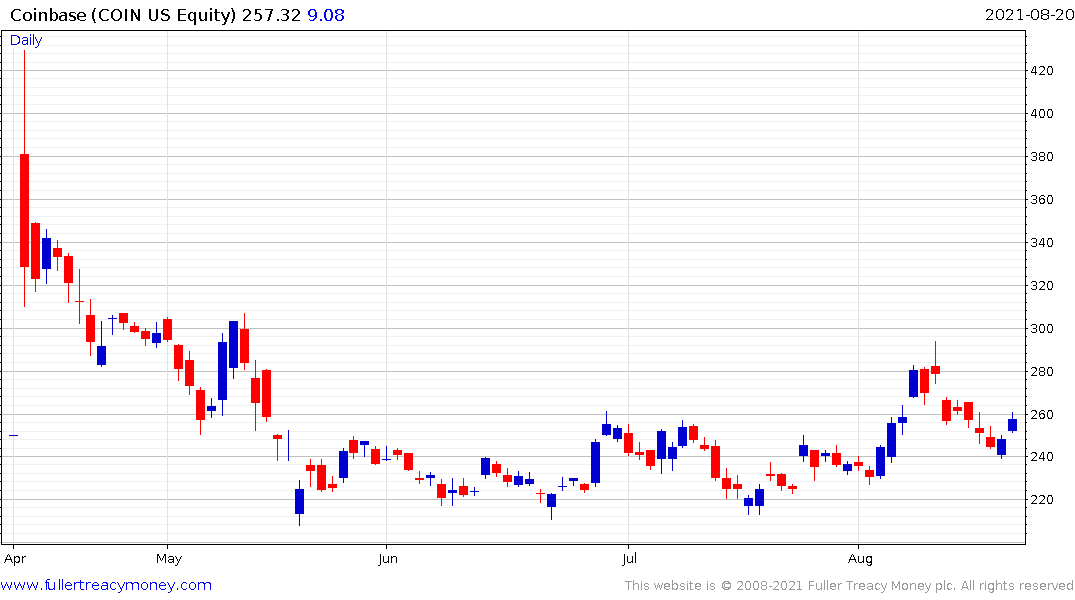 Coinbase bounced today from the upper side of the May - early August base formation and is now back above the IPO price. 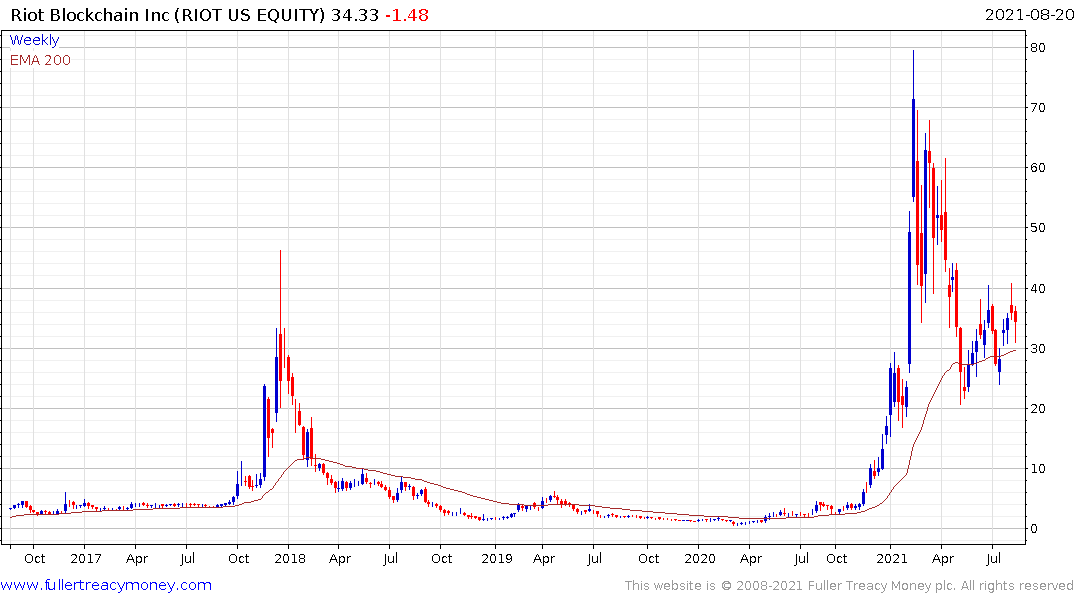 Riot Blockchain is currently rallying from the region of the 200-day MA. 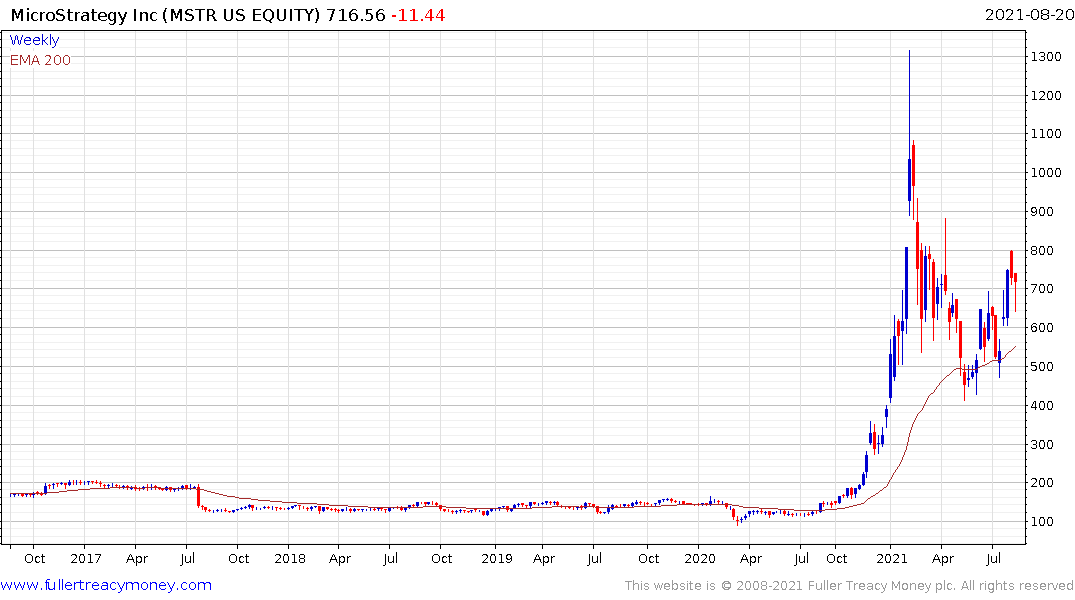 MicroStrategy is also bouncing as it holds its sequence of higher reaction lows. 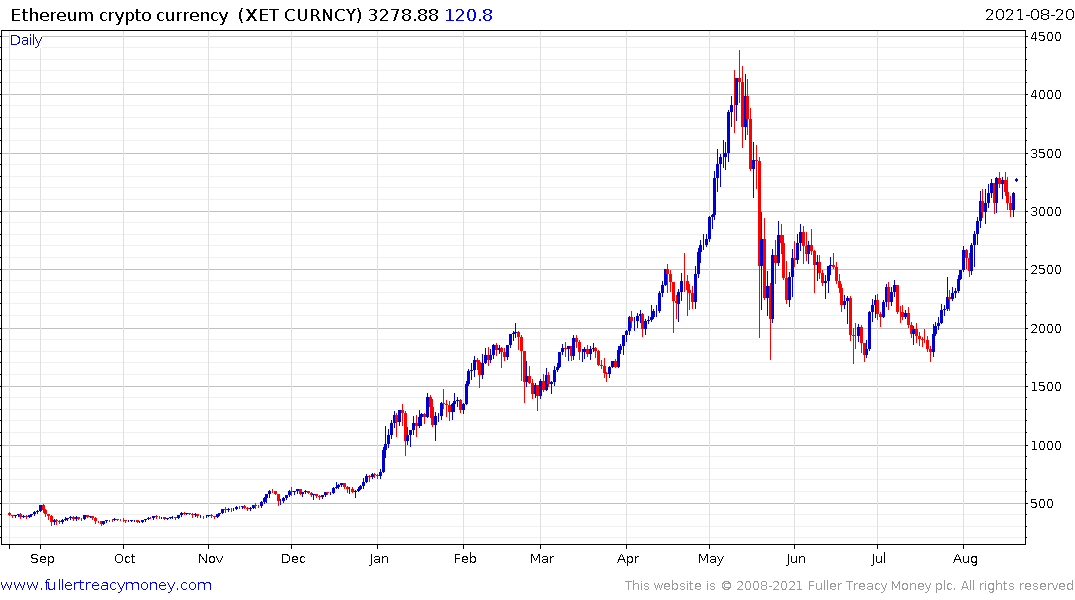 This report from ICBC on central bank digital currencies may also be of interest.