“When you take a bull market and juice it with zero commission trading, we can expect it to generate interest among retail accounts. That, it did,” said Jason Goepfert, president of Sundial. “Retail traders have become manic.”

Individual investors were seen as indifferent participants for much of the 11-year bull market. No more. The latest leg of their emergence times closely with October, when E*Trade, Charles Schwab and TD Ameritrade slashed commission fees to zero. Not that it’s firm proof of anything, but since the start of that month, the S&P 500 is up 13% and the Nasdaq 100 has surged 24%.

Conversations with a handful of clients found lots of praise for zero-commission trades but mostly conservative purchases -- index funds and blue chips. Matt Hermansen, 23, who works for a concrete company in Oakland, California, said the absence of fees makes him more willing to trade.
“I’ll invest smaller amounts. Before I never really invested anything less than $1,000, $500 minimum,” he said in a phone interview. “Now if I have enough to buy an extra share, I’ll do it. I’ll do like $300.”

Welcome back! Remember Caveat Emptor! Retail investors have been absent for the majority of this bull market because they did not have the financial wherewithal to participate. Zero fee trading and accelerating trends are exactly the kind of combination that spurs retail interest in the stock market. Concurrently, low interest rates, the mortgage refinancing boom that began in Q4 and full employment mean retail investors increasingly have the available cash to participate. The downside is the return of retail investors, in force, is a late cycle phenomenon.

This additional article from the Wall Street Journal focusing on the increasing demand for vanity number plates may also be of interest. Here is a section:

Even though the Dow is now closing in on 30000, Mr. Flasck isn’t contemplating another change, at least not yet. The Toledo resident is sticking to the theme of the Dow doubling.

If and when the index hits 40000, the 78-year-old plans to go for a plate tied to the index hitting 80000—a plate change he predicts could happen shortly after he turns 80.

“That gives me a year and a half of breathing room,” he says. “It sure looks like 40 is not out of line anymore.”

My favourite souvenir from the TMT bubble is a Dow 100,000 base ball cap which I still have in the drawer of my desk. That was a time when people were quitting their jobs to take up day trading. It’s worth remembering too that cash- for-gold shops were on every street corner in 2011 as the retail investor got seriously interested in precious metals.

Retail mania usually takes time to evolve which means by the time most people have heard of the miraculous advances, valuations are already high. The mania has the potential to push valuations into extraordinary territory and that process is well underway in the cash-hungry growth sector. 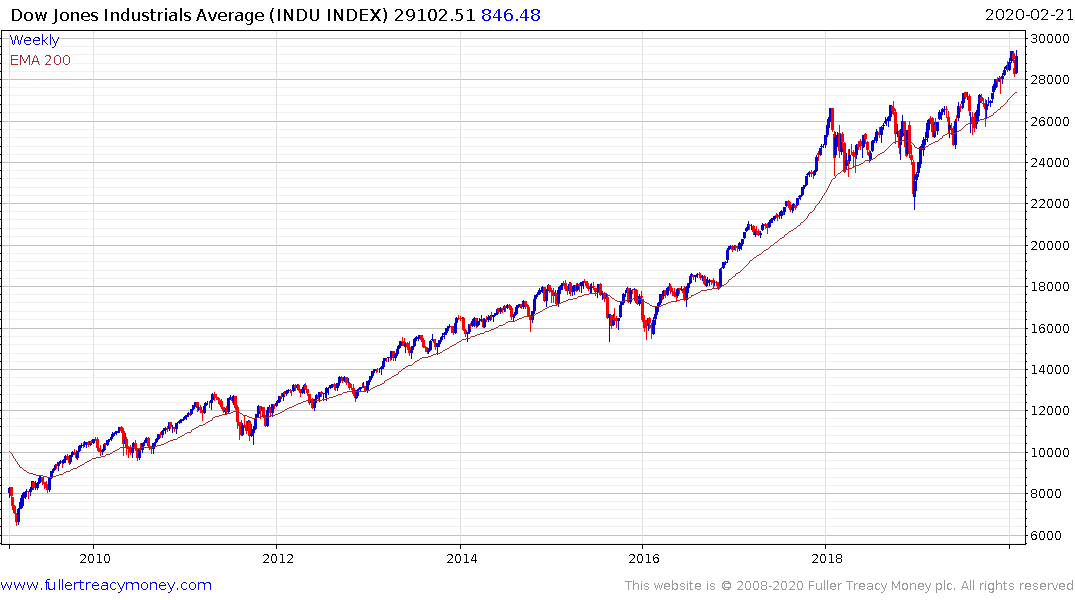 While it is quite normal for big indices to pause at round numbers, because those are logical areas where investors reassess potential, the Dow is a little different. Instead of seeing significant pauses at multiples of 10,000, it tends to pause at the halfway point between big numbers.  It paused around 12,500 in 2011/12, 17,500 in 2015/16 and 27,500 in 2018/19. That interval between this most recent range and the 2015/16 one was double that between the first and second which is a testament to the impressive advance in 2017. Based on that consistency it appears unlikely we are going to see more than a near-term pause near 30,000. If we do, it will represent a significant trend inconsistency.