Most observers expect Modi to win the Gujarat election when votes are counted on Dec. 18. But the narrowed lead is surprising for a bastion of BJP support such as Gujarat, as well as for Modi, whose party has swept to power in most state elections since he took national office in 2014.

Capping days of relentless campaigning, Modi said in a rally in Surat that people of Gujarat would vote for the BJP. “My single aim is to ensure development and improve the lives of the poor,” he said on Thursday.

Anything other than a comfortable victory for Modi would surprise investors betting on a clear win in Gujarat, as well as five more years of Modi’s government on the other side of 2019. "Market assumptions so far have been of a comfortable BJP victory in Gujarat, and that the momentum continues till 2019," wrote Mumbai-based Credit Suisse analysts Neelkanth Mishra and Prateek Singh in a Dec. 5 note.

Elections have been catalysts for volatility, both up and down, in India over much of the last couple of decades. Modi led the BJP to victory for the first time in 14 years in Uttar Pradesh last July and that buoyed sentiment that he would carry over his majority into the 2019 general elections. The result was that the Nifty Index’s rally picked up, before pausing in August near the psychological 10,000.

Investor complacency with political stability in India would be shaken if Modi does not secure victory in Gujarat, his home state, because it could point towards a narrower or contested victory in the 2019 elections. 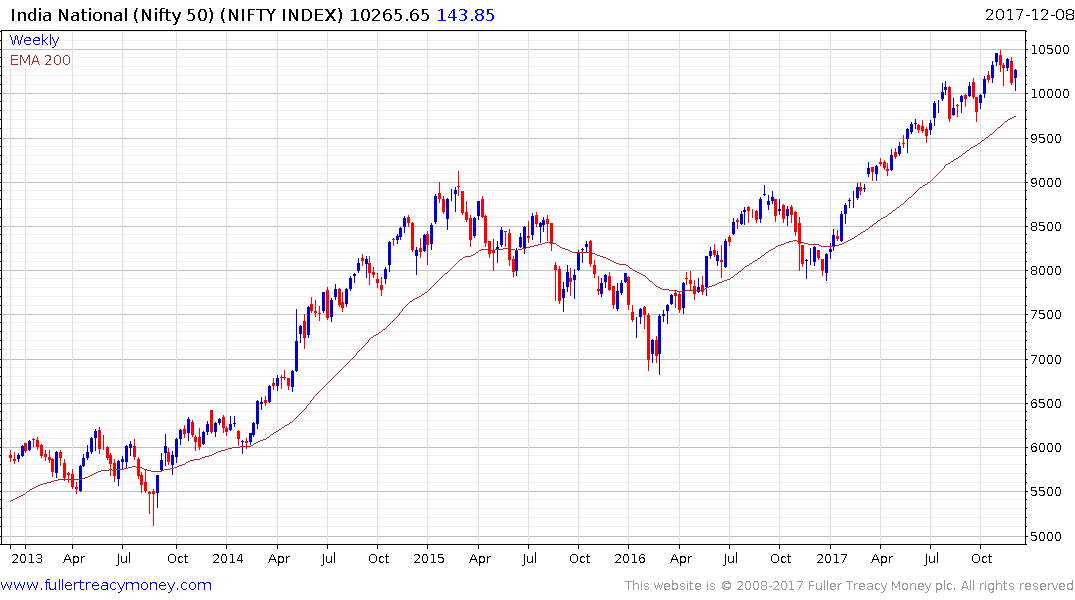 The Index has bounced this week from the 10,000 level and a sustained move below it would be required to question medium-term scope for continued upside.