The excitement around mRNA goes beyond the pandemic. Proponents hope it can become a wide-ranging platform that will lead to vaccines for other difficult-to-treat infections, as well as customized cancer shots and even heart disease treatments. “It’s a big moment for mRNA therapeutics in general, because now it’s a household word and everybody knows about it,” says Derrick Rossi, a stem cell biologist who was a co-founder of Moderna in 2010 but is no longer affiliated with the company. “For Moderna, it’s the first time on the global stage.”

Interest in using genetic material to turn the body’s cells into vaccine factories dates to a series of experiments in the early 1990s. In 1993 researchers at Merck & Co. injected lab mice with loops of DNA that contained instructions for influenza proteins. To the surprise of the scientists, the mice generated an immune response that protected against the flu. The concept, so elegant it seemed almost too simple to be true, produced a surge of excitement among vaccine experts.

But though DNA vaccines worked in animals, they weren’t successful in initial human trials. It was difficult to get sufficient amounts of DNA into human cells, and when scientists overcame that, the vaccines turned out to be less potent than needed. (They were tried on the most challenging diseases, including HIV.) Over the years research into DNA vaccines has continued, but none has made it to market for humans. Inovio Pharmaceuticals Inc., a dark horse in the Covid-19 vaccine race, is testing a DNA-based approach. It uses a hand-held device to zap the skin with electric pulses after an injection, opening up holes in cell membranes to allow in more DNA.

A few lonely scientists pursued mRNA therapies for years. In 2005, University of Pennsylvania researchers Katalin Kariko and Drew Weissman found that a slight modification to the mRNA molecule could reduce the immune reaction, making it much more amenable for use in drugs or vaccines. (Since then, scientists have found ways to reduce mRNA’s other vulnerability inside the body, protecting it from enzymes by encapsulating it in lipid nanoparticles.)

The world is betting big on new technology providing solutions to an intractable problem in record time. So far, results are positive and there is reason to be hopeful a treatment effective enough to improve consumer confidence will be available in the near-term.

The bigger investment point is in exploring the promise of using mRNA as a treatment delivery vector for all manner of other problems. If it is proved to be effective, speedy and safe for a global scale pandemic affecting millions, the logical conclusion is mRNA is likely to also be effective for other infectious diseases as well as against cancer. The ability to overcome the body’s immune response also has potential applications in the arthritis sector which also has substantial unmet need. 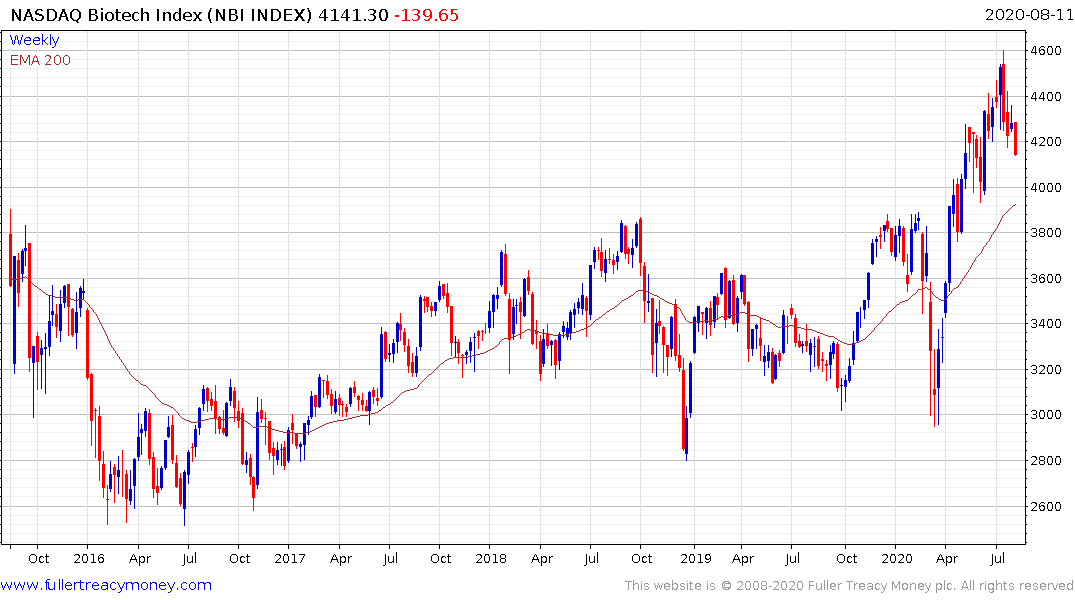 The Nasdaq Biotech Index is pulling back to unwind a short-term overextension relative to the trend mean but will need to hold the 3750 area if the breakout is to be sustained.

The short-term risk for vaccine companies is the sheer number of potential solutions. The market may not be big enough to absorb the supply as it hits market later in the year. 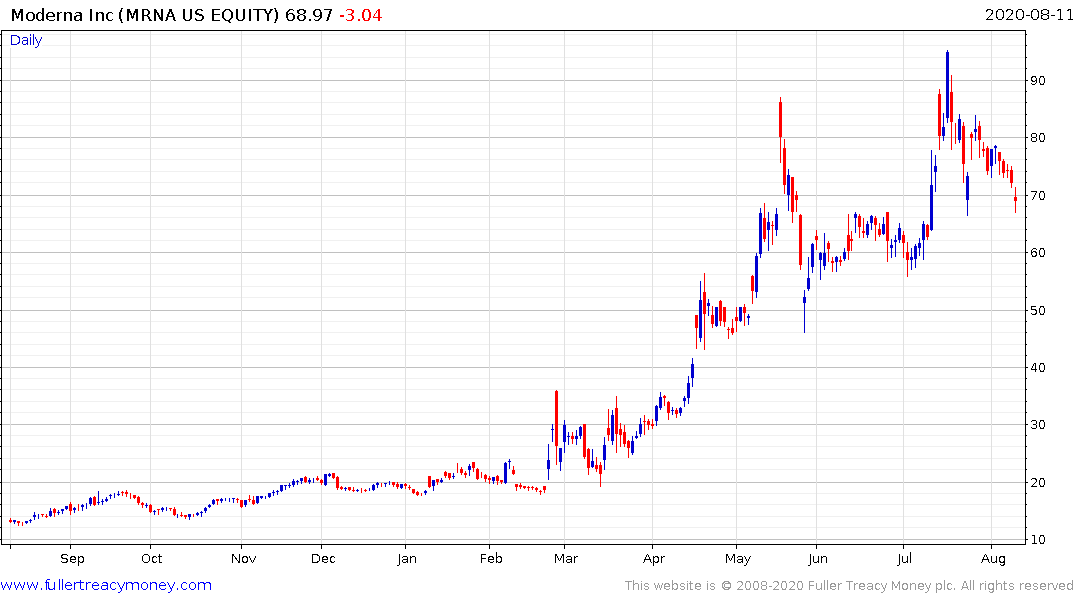 There are also likely to be significant questions about who exactly owns the intellectual property behind these innovative solutions. Moderna signalled just that kind of uncertainty with its solution late last week.