U.S. Treasury Secretary Steven Mnuchin said that if China presents enough trade concessions to President Donald Trump, there is a chance that the administration may seek to lift all tariffs. “Everything is on the table,” Mnuchin said early Tuesday during an interview on Fox Business News “Mornings With Maria” program. The Treasury chief is set to meet with top Chinese officials in Washington on Wednesday and Thursday alongside U.S. Trade Representative Robert Lighthizer about a month before the U.S. is set to escalate the trade war with China with fresh tariffs.

Trump and China’s Xi Jinping gave their officials until March 1 to work out a deal on “structural changes” to China’s economic model. If they fail, Trump has promised to raise the tariff rate on $200 billion in Chinese imports to 25 percent from 10 percent. The collapse of talks would dash hopes of a lasting truce that would remove one of the darkest clouds hanging over the world economy.

Considering what is at stake in terms of economic growth for both China and the USA and the impact a deterioration in relations would have on an already edgy stock market, at least a commitment to continue talking is likely. It would be unreasonable to raise tariffs further while that is ongoing.

The Philadelphia Semiconductor Index is a lightning rod for this trade because its constituents are so heavily reliant on a global supply chain and demand for their goods in China. The Index is currently testing the region of the trend mean and a sustained move above it will be required to signal a return to demand dominance beyond short-term steadying. 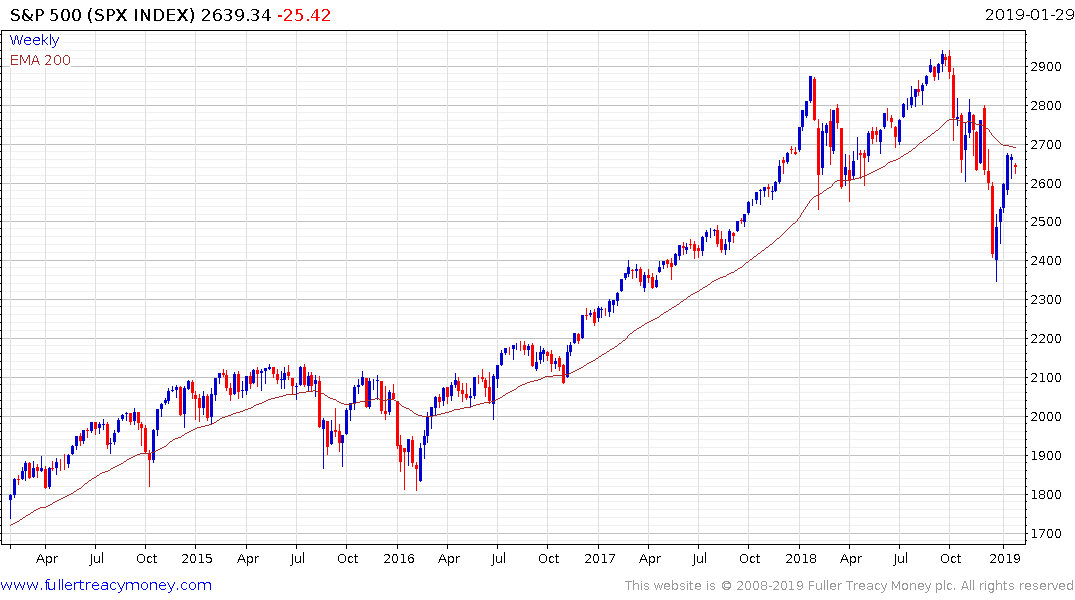 The Fed’s press conference tomorrow is another significant catalyst for investor action this week. The S&P500 has paused over the last three weeks just below the trend mean. This is a natural area of reassessment for investors following an impressive reversionary rally. A sustained move above the trend mean would represent a very benign outcome. Either way, we are eventually going to need to see a higher reaction low to confirm continued buying of the dips which is a clear sign of demand dominance.