Treasury Secretary Steven Mnuchin said the U.S. shouldn’t shut down the economy again even if there is another surge in coronavirus cases.

“You create more damage, not just economic damage -- medical problems that get put on hold,” Mnuchin said Thursday on CNBC. “We can’t shut down the economy again.”

Mnuchin added that he believed President Donald Trump made the right decision to urge states to ease social distancing rules that have crippled the U.S. economy. He said that in the event of a resurgence, it will not be necessary to impose restrictions again because Covid testing and contract tracing are improving and they understand more about how to contain outbreaks.

The majority of coronavirus cases in the USA emerged on the coasts. The middle of the country was comparatively unaffected initially and was afforded the luxury of lax containment measures as a result. The uptick in locations which had large protests a week ago, like Los Angeles, and the rising infection rates in places that did not have a significant issue in March, suggest the first wave of infections is still rolling through communities.

The USA is unlikely to go back into the lockdown nationally. There is a clear realisation that the cure is worse than the disease for most people and that the fatality rate is considerably less bad than originally believed. Nevertheless, consumer behaviour will continue to be negatively affected. The Fed’s estimate of two years to undo the economic contraction takes a V-shaped economic recovery off the table, even though the tech-heavy Nasdaq has done just that.

I received this email from a subscriber which I thought may be of interest to the Collective.

I recently asked a question about the best time to buy and your response was, in order 1) Following significant retracement 2) Completion of a base formation and 3) Breaking out to a new high. How is this consistent with your decision to short Nasdaq with it making a clear breakout, as Apple Amazon and today MSFT are breaking free from their shackles and seemingly surging higher still? 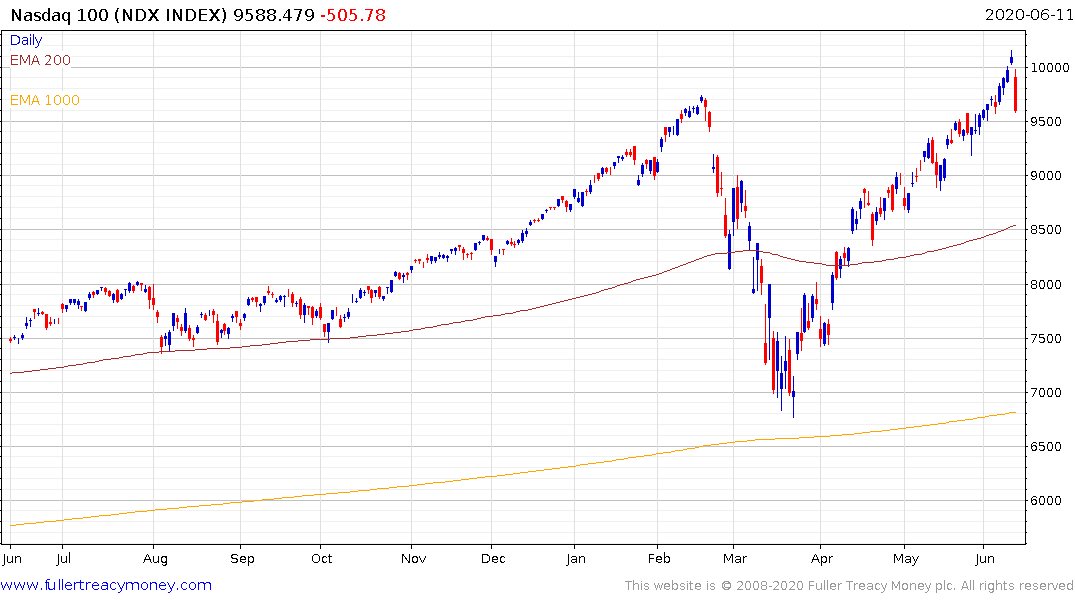 Over the last month, I believe I have been very clear in signalling I believed the 10000 level on the Nasdaq-100 would represent an area of resistance. All other factors being equal, a significant short-term overbought condition leading into a major point of reassessment suggests scope for at least consolidation. That is why I opened the short.

Would I have been better served shorting the Russell 2000 to Dow Jones Industrials? Probably. I remain leery of stock market strength. The liquidity argument also works in reverse. The Fed is leaving the tap open but has tightened the flow. $120 billion a month is less than $500 billion even if it is going to be sustained for at least two years. By that logic we are due a consolidation.

This raises an important point because the dispersion in returns across individual companies is likely to widen considerably. For some shares we have seen little more than a mild correction. For others it is a completing top formation and for still more we may already be in the early stages of Type-3 base formation. 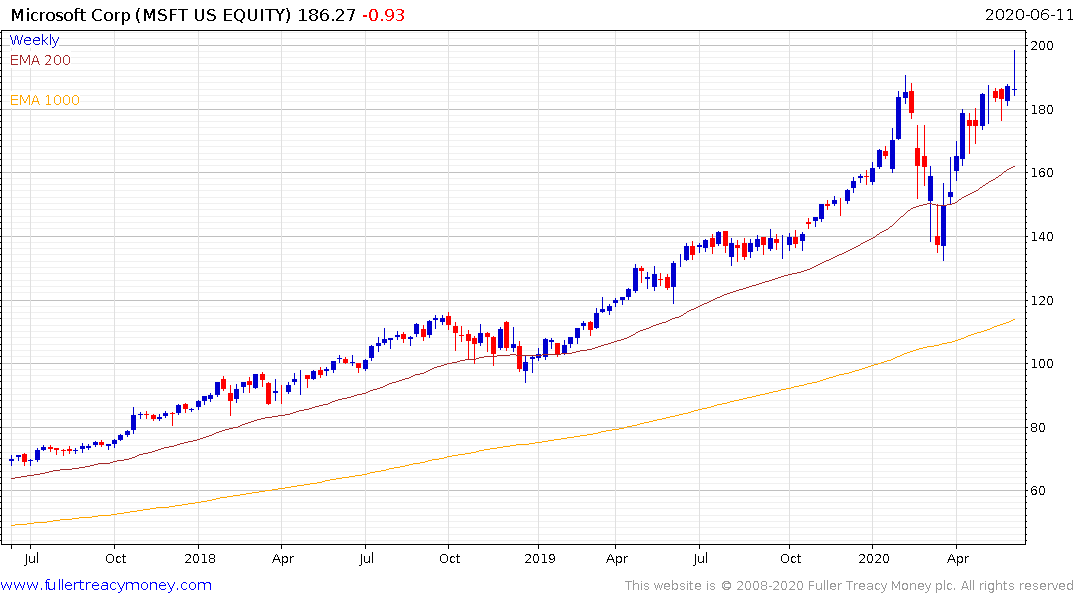 The number of shares that are breaking out of well-defined ranges is comparatively small, even if they are very large companies. Microsoft paused for a month in the region of its peak and broke out yesterday. The challenge for anyone buying the breakout is that it will not be sustained. Nevertheless, the share has ample space in which to consolidate.

The problem with the better performers is they went from deep oversold conditions to overbought conditions without pausing in between. The normal sequence of events is deep pullback, rebound, retest of the low, rebound to the MA, pause, rebound, reassert on the upside. To go from deep pullback to reassert on the upside implies a significant overbought condition. The best-case scenario is a consolidation in the region of the peak in my opinion. 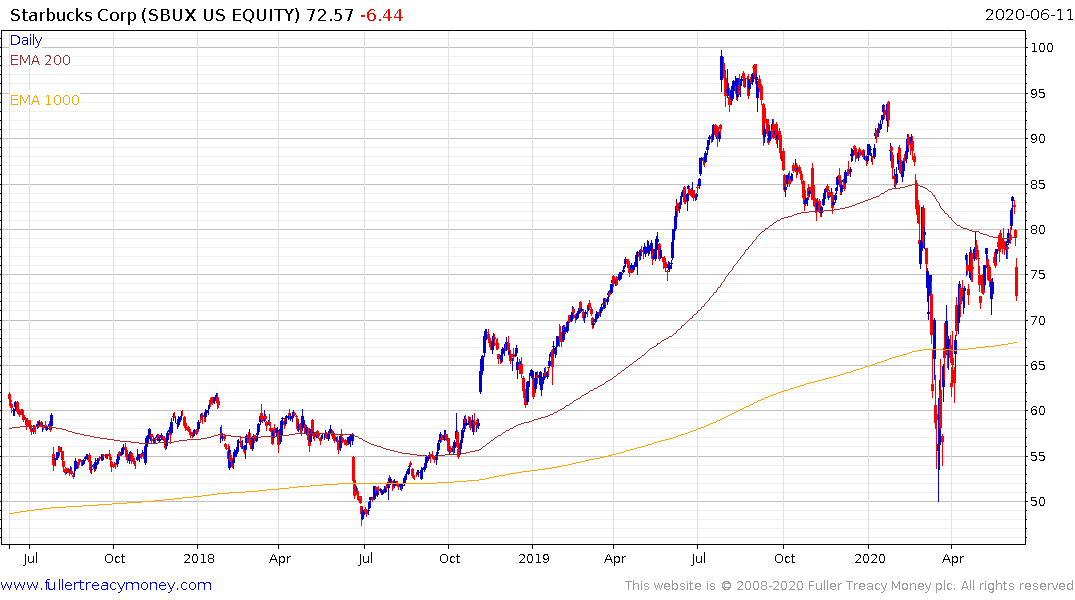 Starbucks halved from its peak a year ago to test the $50 area. It then rallied in two $20 increments and pulled back twice by $20 to form a staircase rebound to the region of the 200-day MA. It has now pulled back by $10 again but that is following a failure to rally by $20 which is an inconsistency in the region of an important area of potential resistance. It is now back inside the most recent range and a clear upward dynamic will be required to question current scope for a further test of underlying trading. 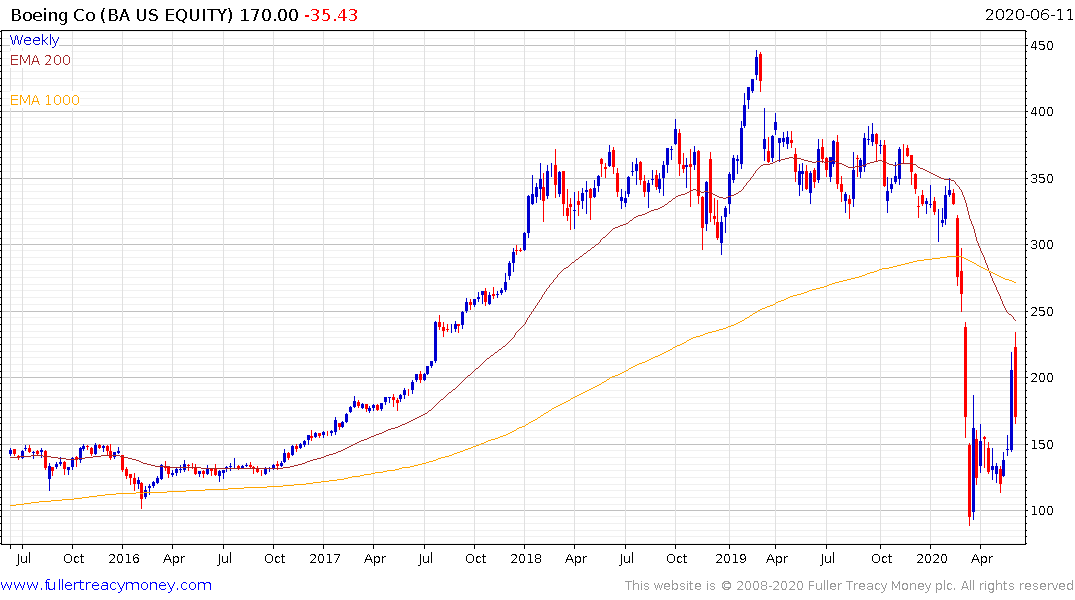 Boeing is unlikely to go bust because it’s systemically important to the US economy. However, even outside of the coronavirus, the company has problems. Following an accelerated decline for a company at the epicentre of risk, a sharp rebound is often to be expected. However, with little in the way of new ideas, the share price often settles back down into a lengthy range which we characterise as a Type-3 bottom. The financial engineering on which Boeing relied is killing people. It is unlikely to be tolerated in future. 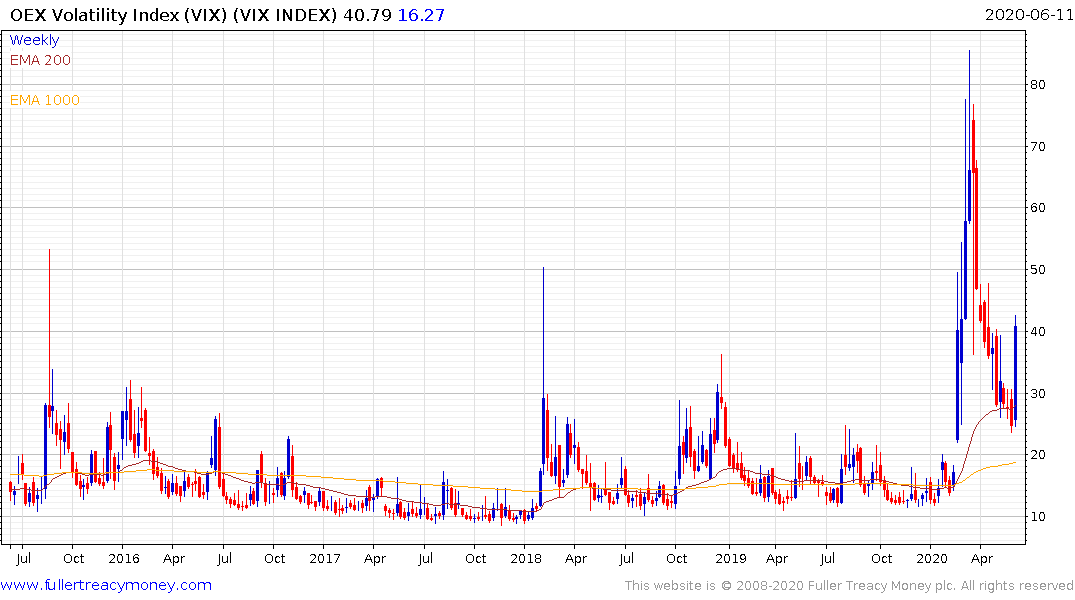