The evidence refutes a "widespread hope that expanding Medicaid coverage might reduce use and potentially save money," Baicker said. While no research can be perfectly generalized, she said this is the "first-ever" randomized trial examining

Medicaid's effect on emergency-room use. In randomization, the only difference between two groups is the variable being evaluated.

Anyone familiar with how the Jevon's Paradox affects patterns of supply and demand would understand that reducing the cost of an attractive service such as healthcare can only result in greater demand for that service. I know that when I lived in the UK, with free GP care, I went to the doctor whenever I had the slightest sniffle but when it cost €70 in Ireland, I went to the pharmacy more often than not. We can expect consumers to make exactly the same value judgement with emergency room care. If more people now have access to healthcare in the USA, demand can only go up. This should be positive for any company that profits from healthcare usage such as medical supplies etc.

As a new arrival in the USA, the furore surrounding the implementation of the Affordable Care Act has had a direct impact to our family, so I thought I would pass on my impressions and possible implications from an investor's perspective.

I navigated by way through the Coveredca.com website, which is California's health market place, assessing different plans on offer from some of the major insurance companies. Having narrowed the search results, I compared these to what the individual companies are offering via their own websites. While it is difficult to make generalisations, I can confirm that the level of cover offered in the state marketplace is substantially below that on offer directly from the insurance companies for a slight premium. One example is that while the closest hospitals to me are Cedar Sinai and Ronald Reagan UCLA, none of the plans on offer via the government site seemed to have these hospitals in their networks. The nearest primary care facility on offer via Covered.ca was 13 miles distant which in Los Angeles traffic could be anything from 20 minutes to an hour away. As a result we decided that the best option for our family was to deal directly with the health insurance companies.

Greater access to "affordable" healthcare and a range of government supports for those on lower incomes to gain coverage means that more people will be accessing the health system on a regular basis. One of the main side effects of this policy initiative has been that an increasing number of corporations no longer feel obligated to absorb the cost of healthcare for their employees. The result is that consumers will be coming to the same value judgements I came to and those who wish to avail of better service will end up paying a premium for access to individual plans from health insurers.

Since insurance premiums represent cash flows similar to collateralised debt obligations let us consider health insurance policies as if they were mortgage bond tranches. The universe of consumers is broken down within an insurance company¡¯s balance sheet by group plans and individual plans. As a result of the Affordable Care Act some of the group plans will disappear, others will be created and the ranks of those with individual or family plans will increase. While it suits the insurance company to market the individual plans as tailored solutions, viewed from the perspective of a cash flow tranche, they represent an increasingly large liquid pool of cash flows. Without the collective bargaining capability of groups, individuals will end up paying a premium for coverage. However, the risk to the insurance company can be more efficiently managed because of the depth of the pool of premiums. 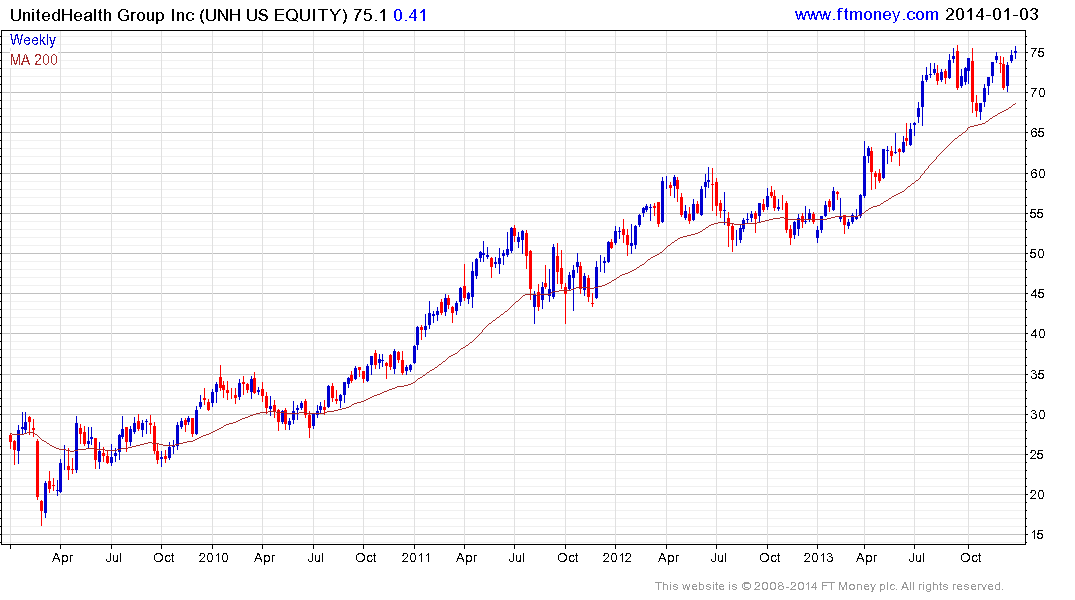 The above represents a supposition on my behalf and the price action of health insurance companies suggests that much of this good news has already been priced in. Companies such as United Health have spent much of the last six months ranging in a relatively gradual process of mean reversion. The share found support in the region of the 200-day MA from November and has returned to test the peaks near $75. A sustained move above that level will be required to reassert medium-term demand dominance. 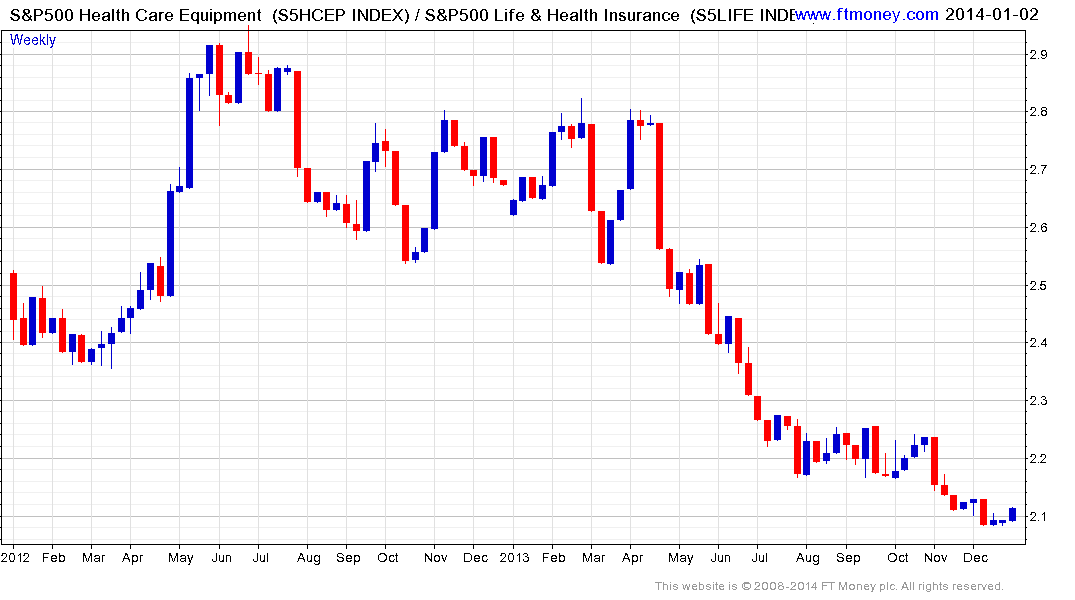 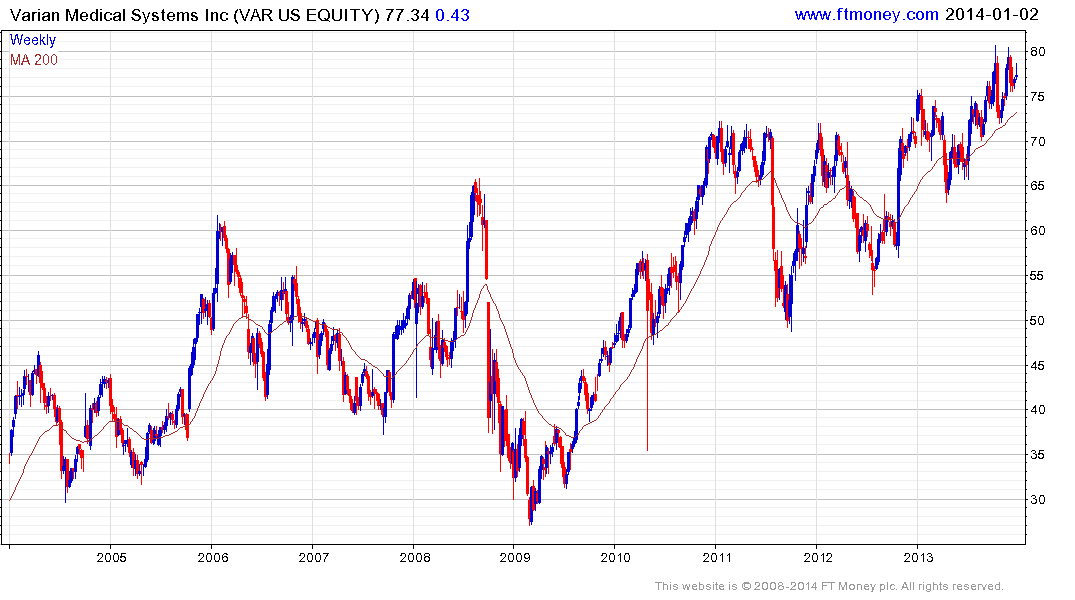 Varian Medical has held a progression of higher reaction lows since 2011 and broke out of a three-year range in September. It has been consolidating in the upper regions of the congestion area since and continues to find support in the region of the 200-day MA. 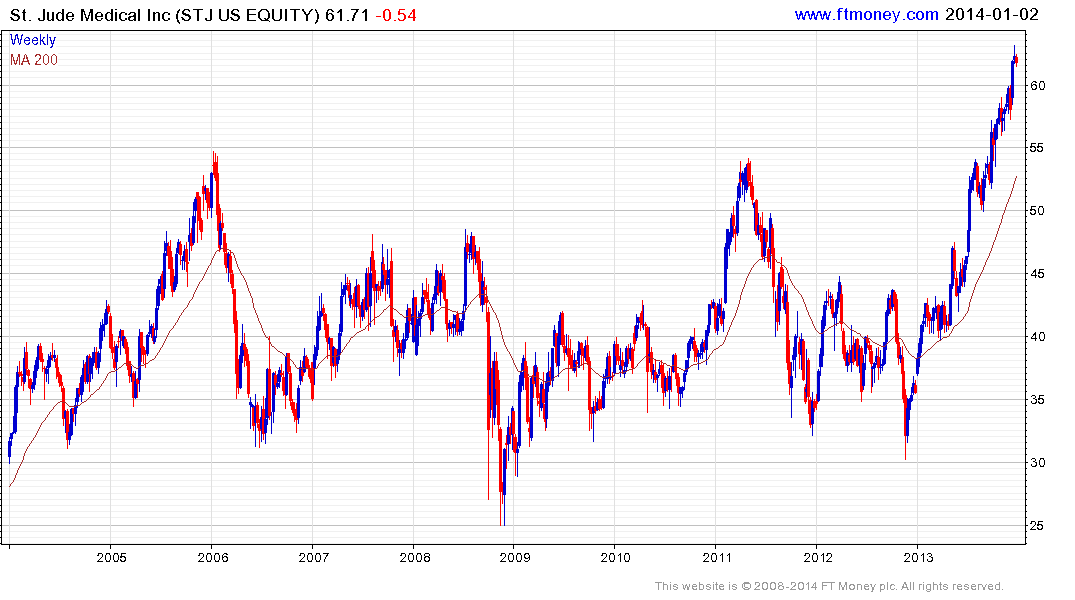 St Jude Medical completed a decade long base in September and continues to extend the breakout. While temporarily overextended relative to the 200-day MA, a sustained move below the 200-day MA would be required to question medium-term recovery potential. 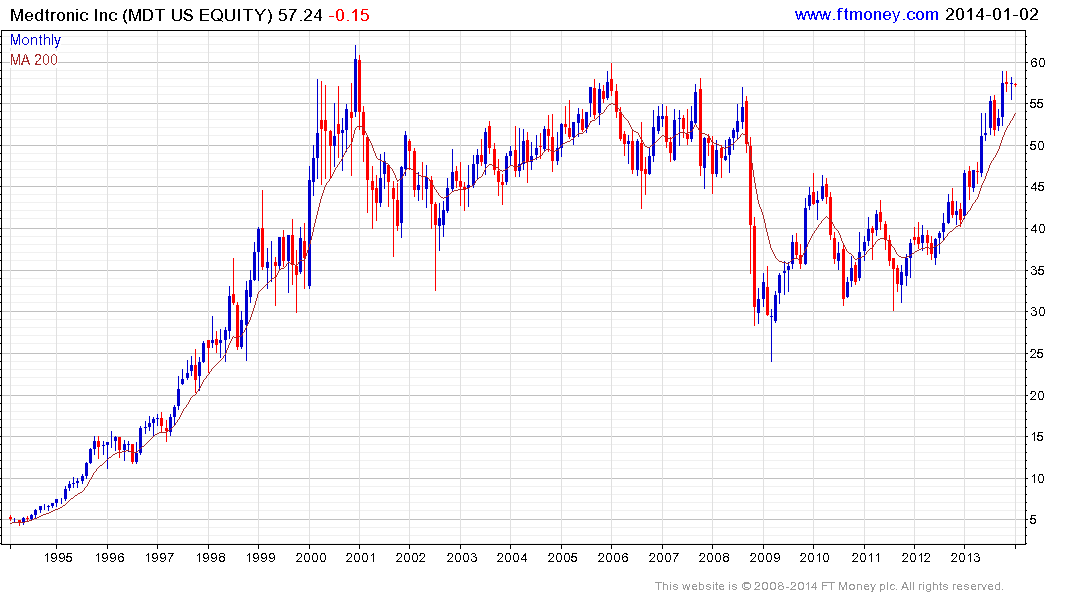 Medtronic has returned to retest the 2008 and 2000 peaks near $60. While some additional consolidation in this region is possible a sustained move above $60 would reassert medium-term demand dominance.