The most troubling and tragic threat to Mexico’s democracy is violence. Since campaigning began in September 2017, 132 politicians (jpg), including 48 official and aspiring candidates, have been killed, according to Ellekt, a consulting firm.

The most recent murder happened on June 25 in the southern state of Oaxaca. Emigdio López Avendaño, a candidate for local representative from AMLO’s party, MORENA, was gunned down along with four of his supporters.

The level of violence represents a huge spike from the run-up to last presidential election, in 2012, when less than a dozen politicians were killed, according to Ellekt. The firm’s director, Rubén Salazar, attributes the increase to state governors’ waning control over municipalities. Thanks to free elections, voters have been kicking out incumbents from governor’s offices around the country—a step forward for democracy. But at the municipal level, it’s had the perverse result of clearing the way for local strongmen to hijack the election process, sometimes at gunpoint.

“These changes have happened faster than the transformation of the political and democratic culture at the local level ,” he said in an interview in Artistegui Noticias (link in Spanish).

The three primary tenets of improving governance that we look for in an investment destination are that it have respect for minority shareholder interests, an independent judiciary and a free press. Those attributes increase the potential that economic growth will flow through to the stock market and that you will be able to get your money out when it comes time to sell.

Mexico has a drug trafficking problem and that is contributing to how weak public institutions are. Additionally, it has a national oil company which is under the control of a graft-prone government so it is not as efficient as it could be. The failure of administration of Pena Nieto started off with a great deal of enthusiasm but it has proved unable to tackle the issues which have prevailed against so many centrist governments over the last few years.

Narendra Modi was the first successful populist and is the first low caste person to achieve India’s highest office. He has been followed by a succession of populist upstarts which all share the characteristic of having originated on the political fringe. AMLO is the latest iteration of that trend, this time from the Left and he is promising more spending, better services and a crusade against corruption. Quite where the money is gong to come from seems largely unanswered. 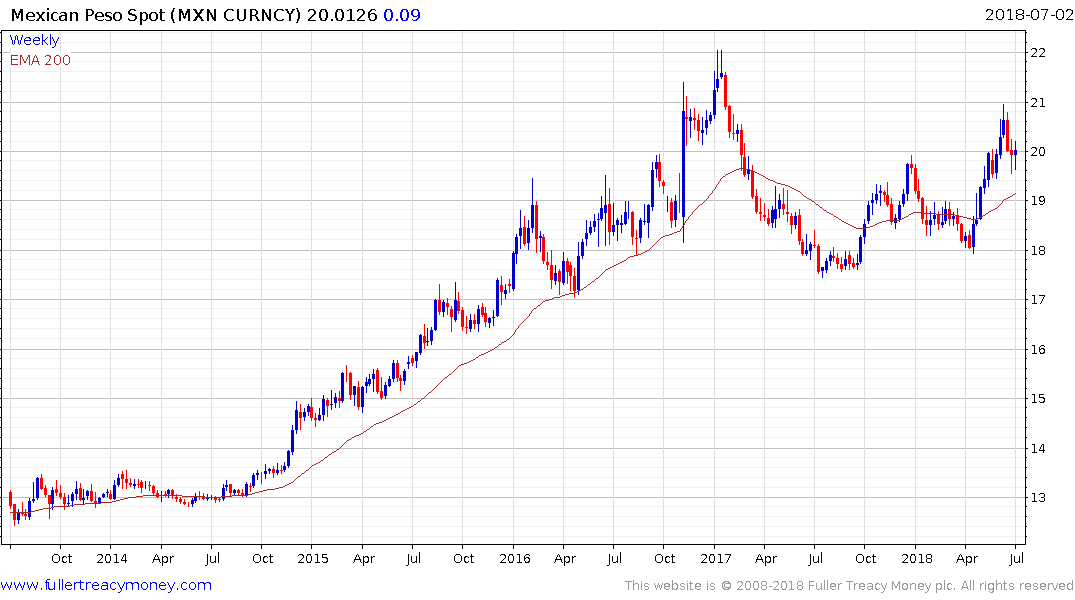 The Mexican Peso was volatile but closed relatively unchanged today suggesting investors are waiting on conclusive results from the lower and upper house elections. Nevertheless, the fiscal outlook for the country under a populist leftist regime is going to be heavily dependent on the continued strength of the oil price. 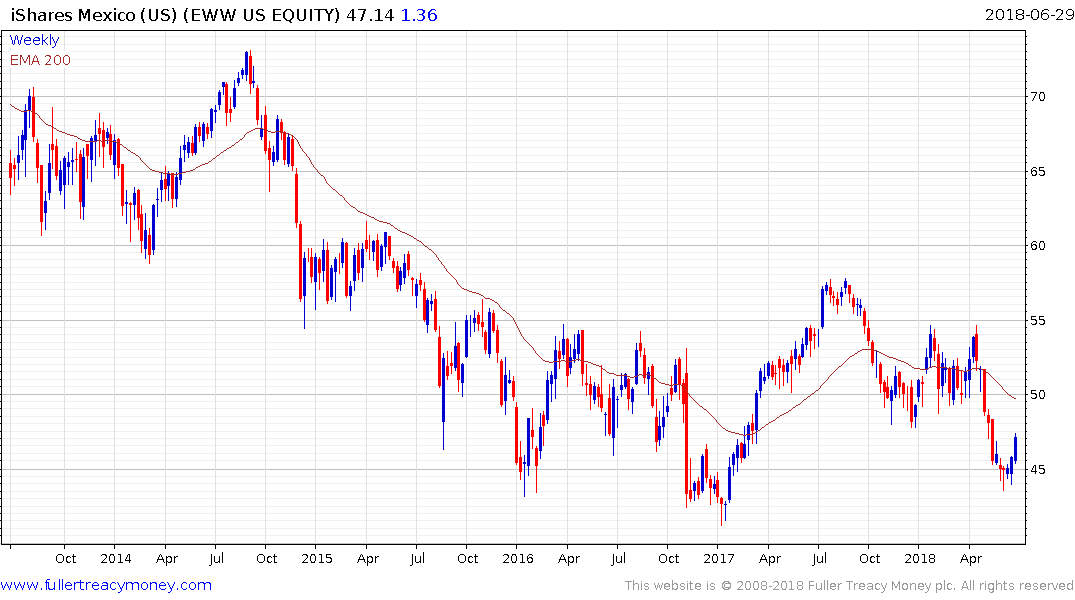 The iShares MSCI Mexico has paused in the region of the lower side of a more than two-year range but would need to sustain a move above the trend mean to confirm a return to demand dominance beyond short-term steadying.