Alphabet Inc.’s brisk rally on Wall Street on Wednesday is giving a boost to the Nasdaq 100 Index, still reeling from last month’s selloff in tech stocks. Shares in the Google parent are surging after it announced a stock split and posted quarterly sales and profit that topped analysts’ projections, signaling the resilience of its advertising business. The gains in Alphabet shares -- the third biggest stock on the Nasdaq 100 with a weighting of 7.4% -- account for most of the rise on the index on the day.

Apple warned about its ability to fulfill orders before Christmas and subsequently was able to beat that projection. The share jumped on the news but guidance was for slower growth in Q2. 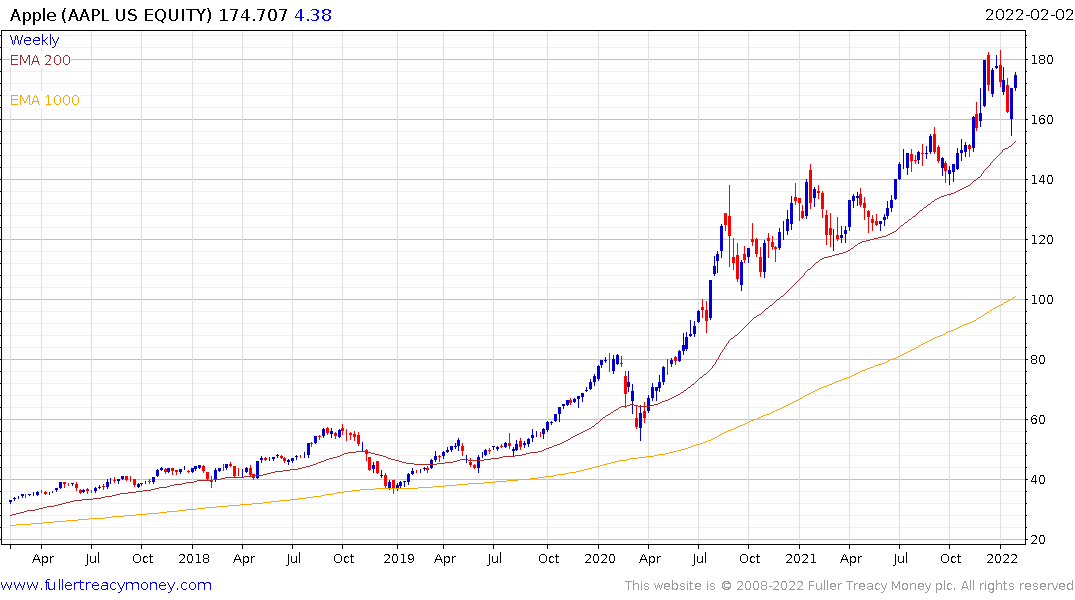 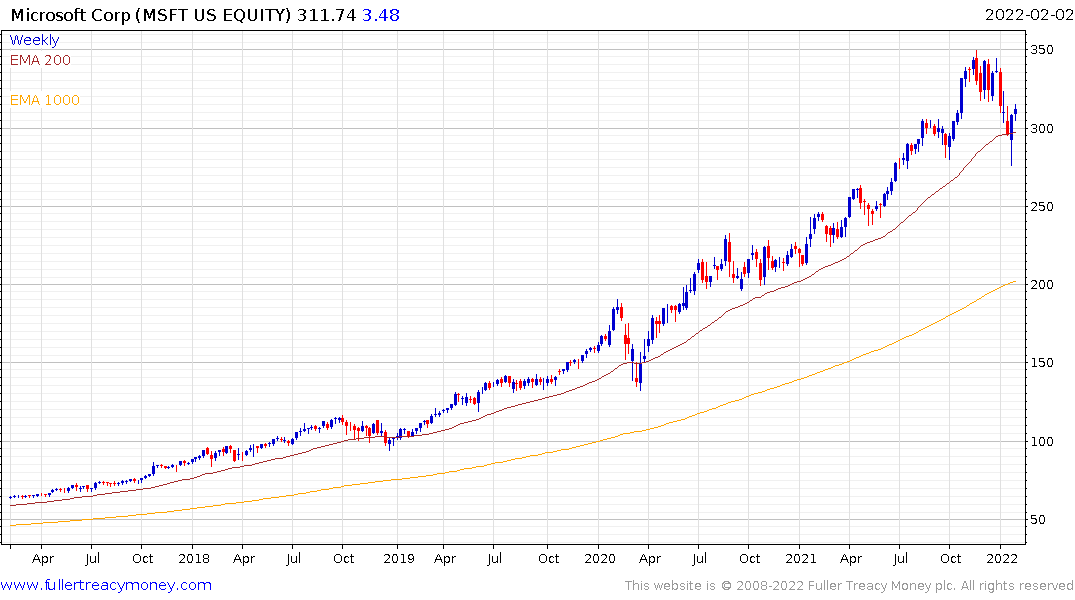 Microsoft initially reported growth would decline, and half an hour later released a placating statement to suggest it was still going to be a steady year. The share rebounded from its initial panic. 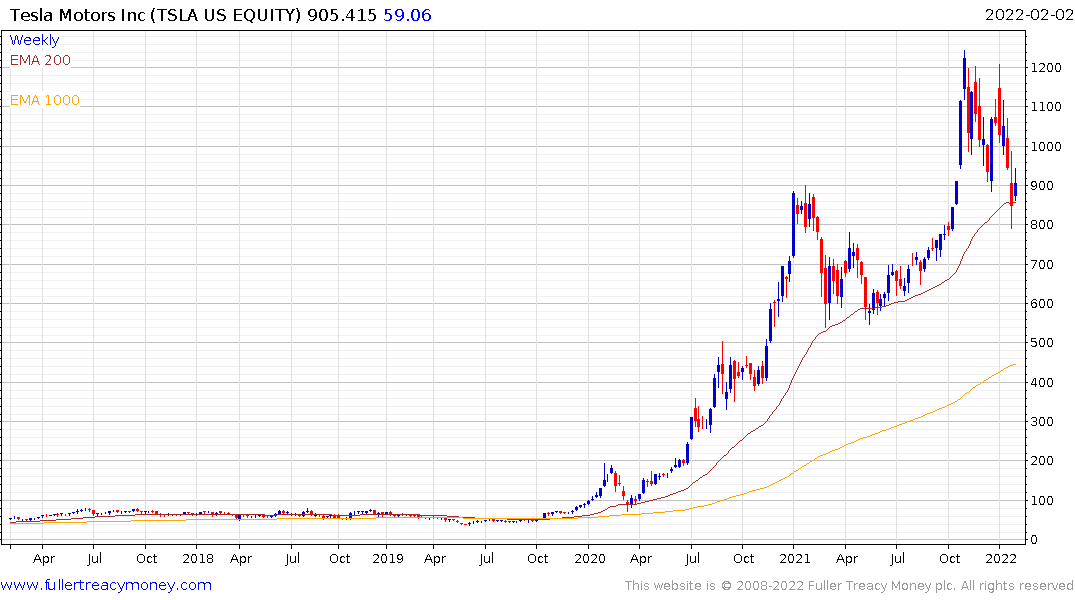 At Tesla’s earnings announcement, the release of the Cybertruck was delayed again and the potential for full self-driving by yearend was boosted…again. The share continues to pause in the region of the 200-day MA and the highs from back in early 2021. 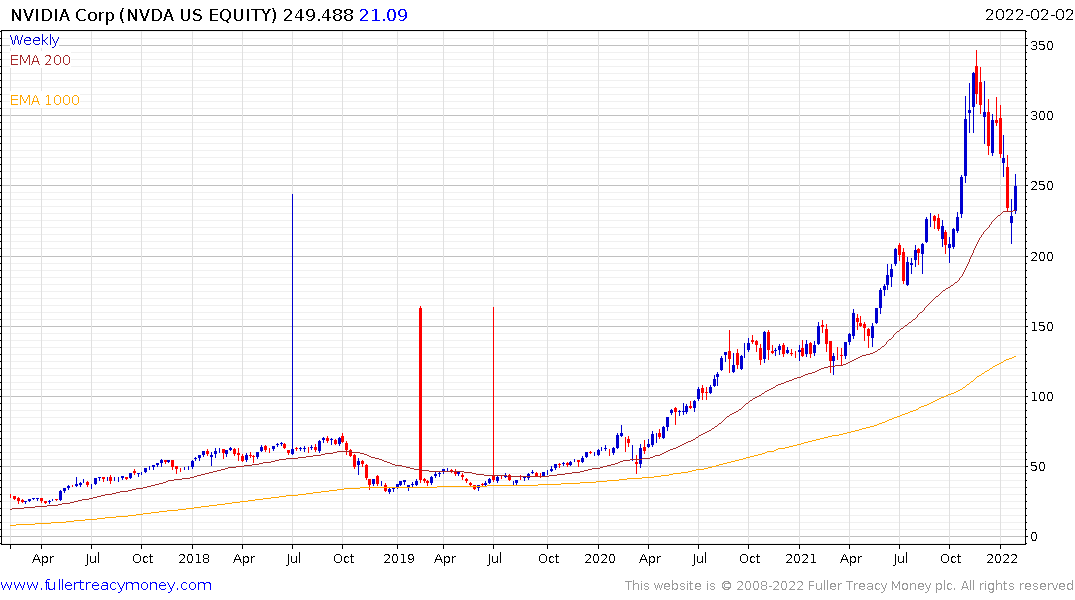 NVidia reports in a couple of weeks and the share is also steadying in the region of the trend mean.

Netflix collapsed on its earnings amid slowing subscriber growth. The share has steadied but it looks like a dead cat bounce. At a minimum, some consolidation is required before higher levels can be sustained. 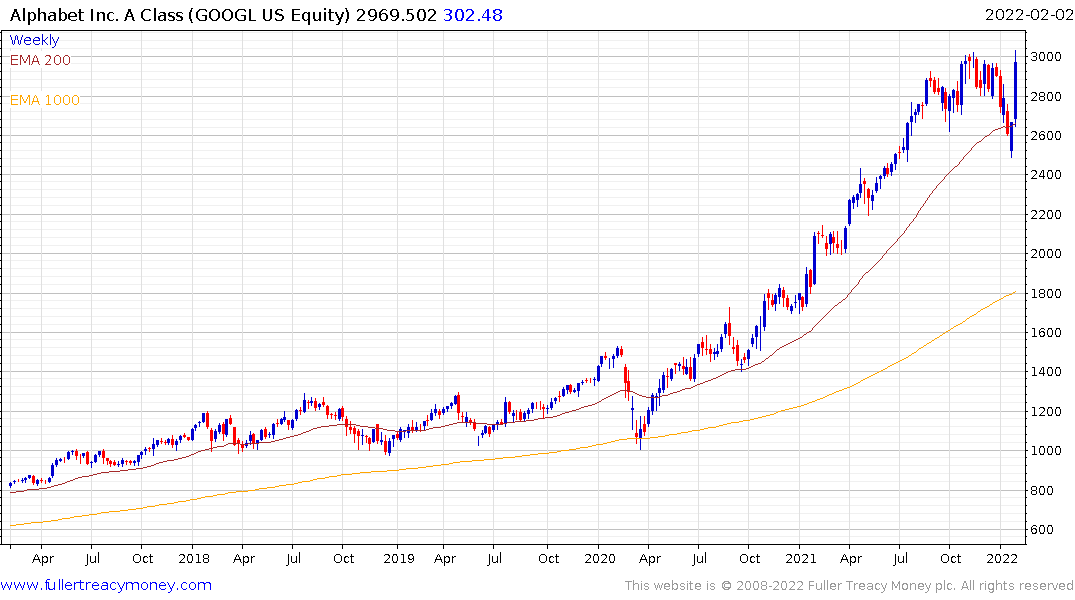 Alphabet reported last night and beat on every metric. They unabashedly believe they will continue to gain market share in the TV advertising sector. The share jumped to a new high at the open and held the advance by the close. 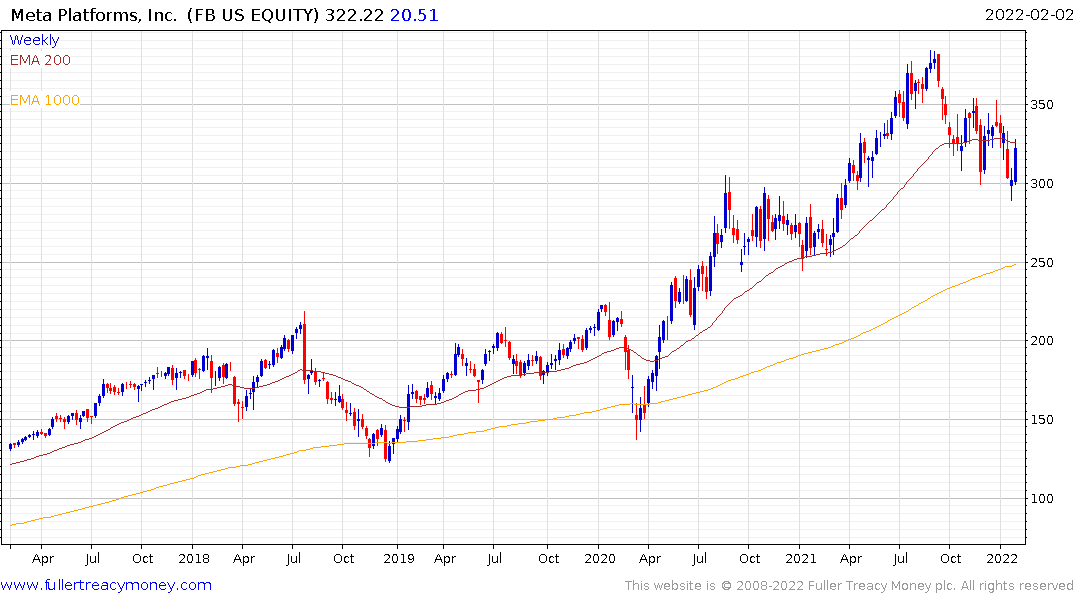 Facebook reported after the close today. It has been rallying over the last week in anticipation of a similar upside surprise to Alphabet’s. That did not occur so the share is going tp pull back in a dynamic manner tomorrow, which is a failure at the first area of potential resistance. 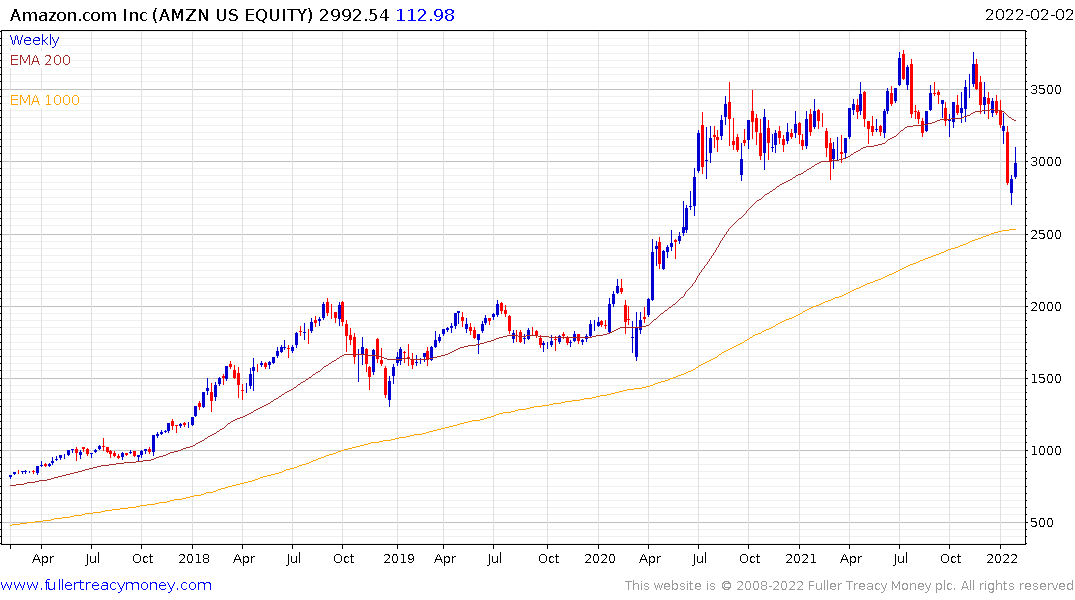 Amazon reports tomorrow. It’s reasonable to expect they had a solid holiday season and AWS probably did much better than expected. Nevertheless, guidance is likely to disappoint. The share price has gone nowhere since July 2020. There is a series of failed upside breaks, a massive reaction against the prevailing trend and the trend mean is now trending lower. This looks like a completing Type-2 top formation.

Despite volatility in this small group of shares, the FANGMANT/total market cap ratio continues to rebound. That suggests the wider market is bouncing back less impressively than the mega-caps. 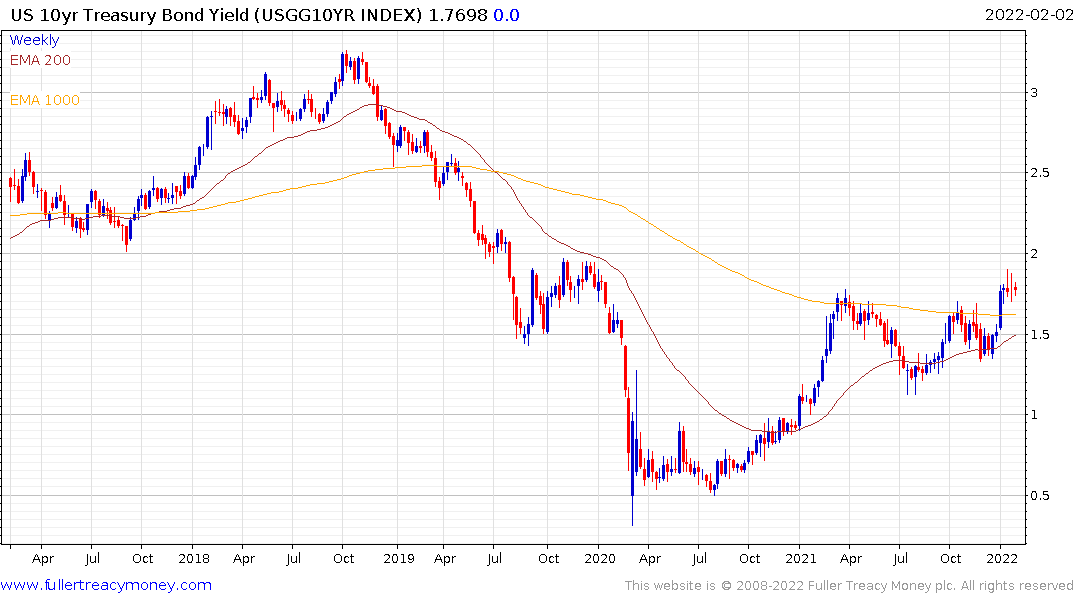 At present, 10-year bond yields are pausing in the region of the peaks posted immediately before the pandemic. The fiscal drag is expected to be in the region of 2% of GDP this year. That’s the most likely rationale for why yields are not higher given current inflation rates.

The combined effect of a drag from fiscal spending, the end of QE, virtual certainty of a rate hike in March and potential for quantitative tightening in Q2/3. There is a clear risk that bonds are about to outperform and stocks will suffer as liquidity tightens. 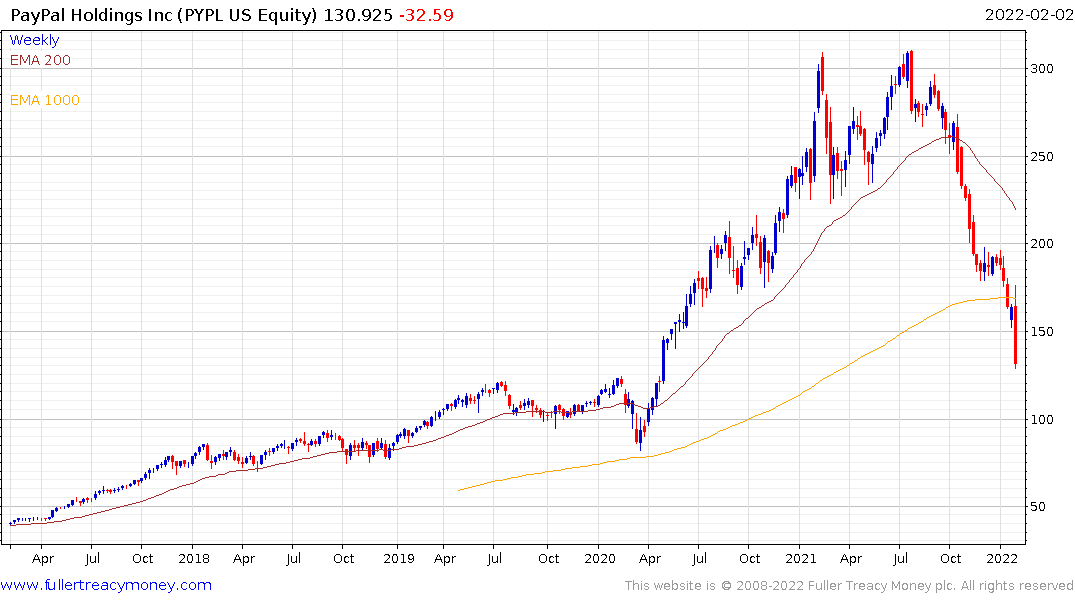