McDonald’s Corp. announced Thursday it will raise hourly wages by about 10%, bringing the average wage at its restaurants to more than $13 an hour. Chipotle Mexican Grill Inc. said earlier this week it will set hourly starting wages at $11 to $18. Target Corp. and Costco Wholesale Corp. have increased theirs to $15 and $16, respectively.

McDonald’s is hiring 10,000 new employees at its company-owned stores over the next three months alone, and Walmart Inc. brought half a million people on board last year. Chipotle is hiring 20,000 workers across the U.S., and Target needs workers for the 30 to 40 stores it will open this year.

Amazon.com Inc. also upped the labor market ante Thursday by announcing plans to hire 75,000 people in the U.S. and Canada at starting pay that will average more than $17 an hour. New employees will get hiring bonuses of $1,000 and those fully vaccinated for Covid-19 will get additional $100.

The year over year change in average hourly wage growth has been massively distorted by the pandemic. It surged in 2020 because fewer people were working, and those that were got pay rises. It then plummeted to historic lows because the current growth is on par with what was witnessed a year ago. 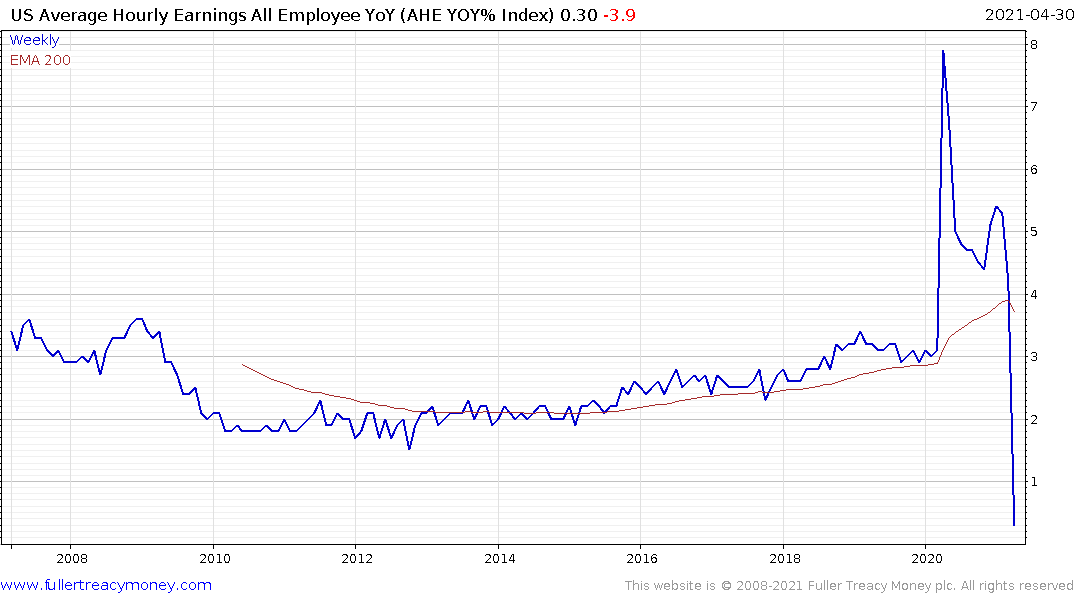 The month over month figure is picking back up again and is now up to 0.7% compared to last month. The question of how to encourage people back into the labour forces has to rest on wages and benefits.

The message from the market is clear. People want more money. Having got a taste of a better financial condition, for doing less, people suddenly feel their effort is worth more. That’s the essence of inflation. Companies raising wages will not be shy in passing on the hikes to consumers.

As prices rise, they create demand for insulation from inflationary pressures. That is fuelling demand for companies that have strong franchises, global scope and dominate their respective niches. The autonomies and dividend aristocrats continue to trend higher.

Meanwhile gold is beginning to recover from a nine-month interlude in its longer-term bull market. The price is steadying within a tight range above the exponential 200-day moving average and below the simple version. I favour exponential MAs because I believe it is correct to give additional weight to recent data. That leads me to the conclusion that support in the $1800 level is important and a sustained move below that level would be required to question medium-term scope for a break of the nine-month downtrend. 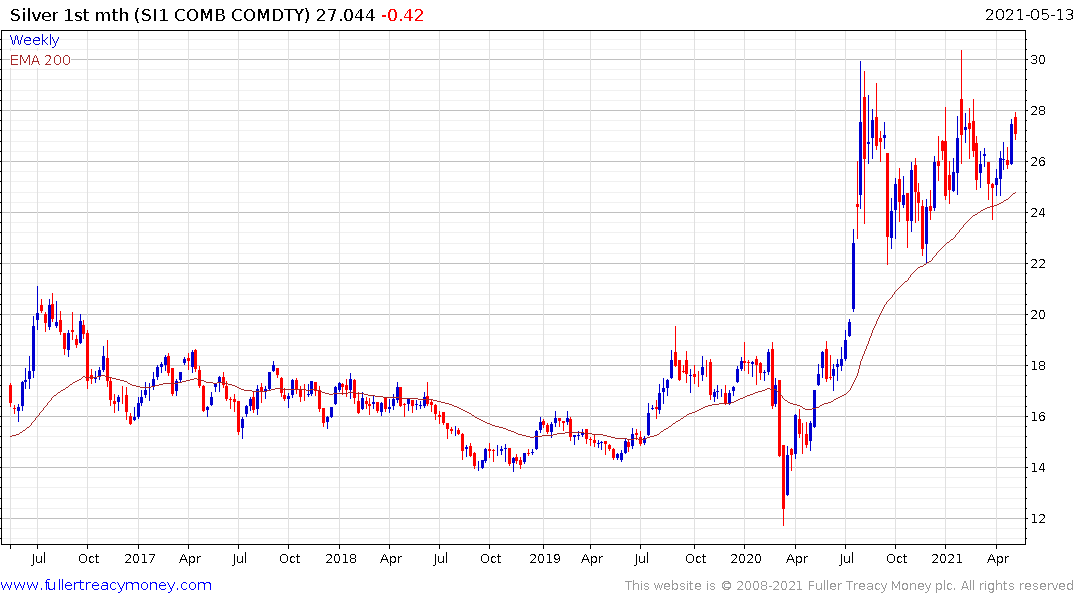 Silver has first step above the base characteristics and has spent the last nine months ranging above $20 and finding support at successively higher levels. That suggests accumulation on dips and the breakout, when it comes, will be surprising with both its speed and ferocity. 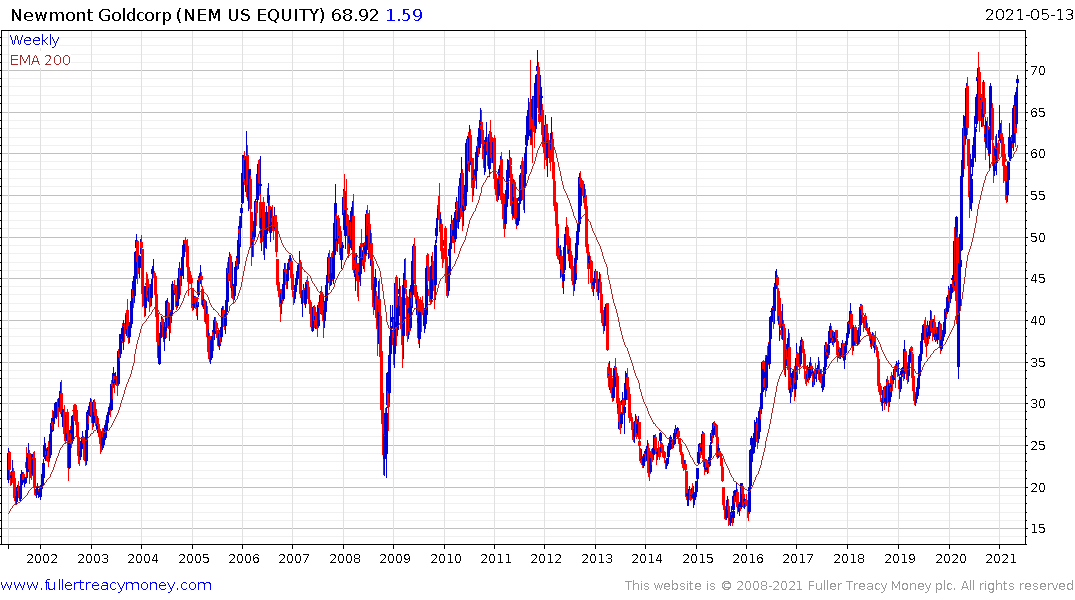 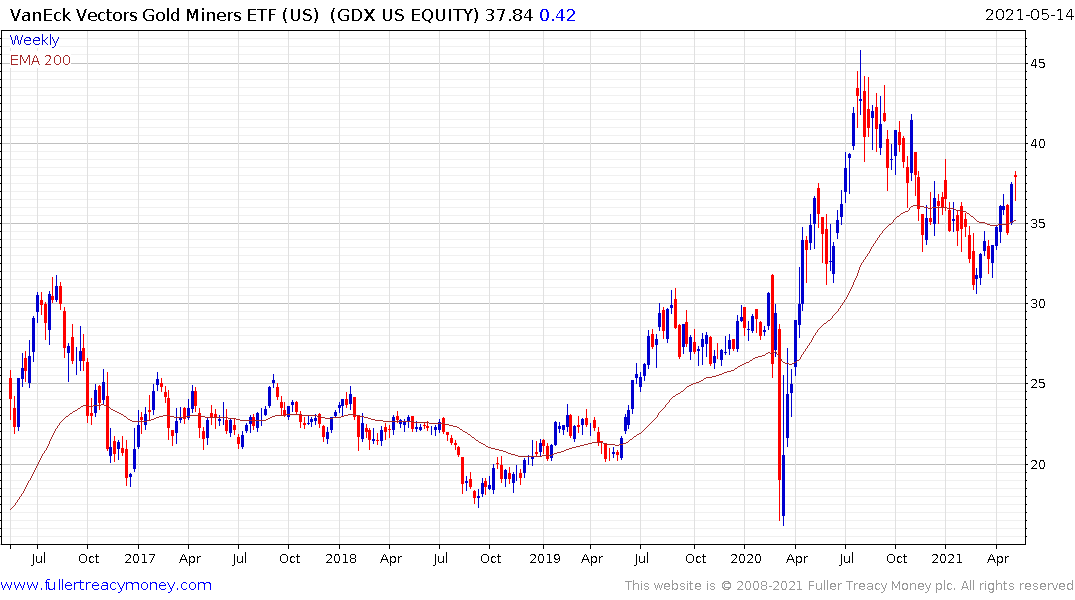 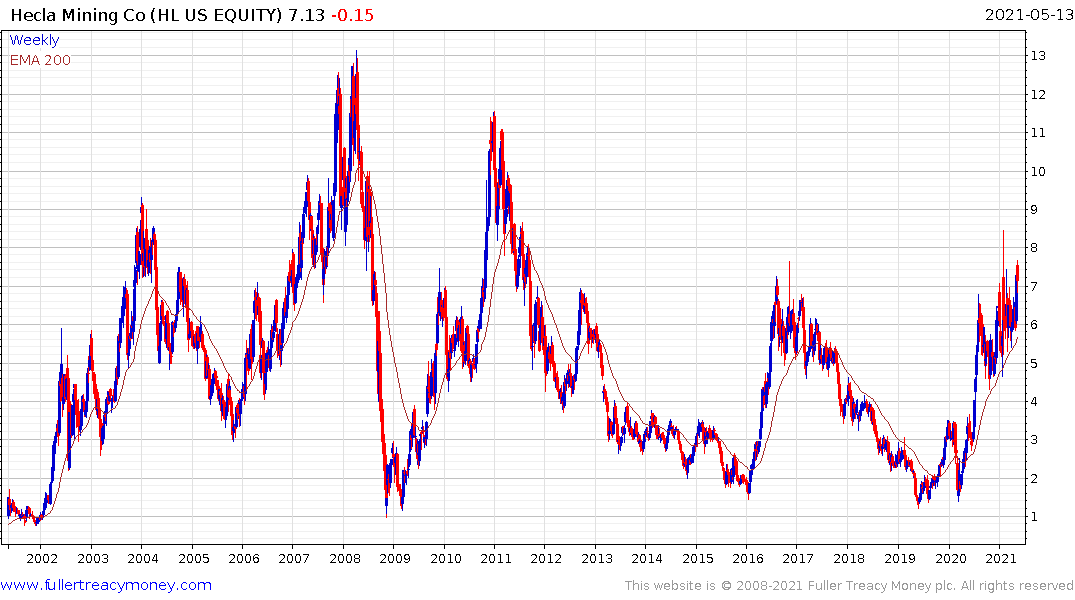 The VanEck Vectors Gold Miners ETF (GDX) has broken its seven-month downtrend, so it is leading the gold price higher. A sustained move below $30 would be required to question medium-term scope for continued upside.