Operating expenses, excluding a one-time charge related to settling merchant litigation, climbed 11 percent to $1.1 billion from $966 million a year earlier, according to the statement. MasterCard spent more on rebates and incentives tied to signing deals with card issuers, the firm said.

“The notorious lumpy rebate line was even higher than expected," said Jason Kupferberg, an analyst at Jefferies Group LLC in a note. "Our initial look shows no reason for significant concern. We view the pullback as an especially good buying opportunity."

Mastercard and other credit card companies are among the primary beneficiaries of the growth in the global middle class where instant gratification plays an important role is fuelling demand for goods and services. The growth of the online retailing sector, also on a global basis, represents an additional revenue stream which is likely to increase for the foreseeable future.

With the company increasing its dividend and buying back $3.5 billion in shares investors could be forgiven for thinking that all is as it should be since efforts are underway to support the price as valuations contract from a pricey P/E of 24. 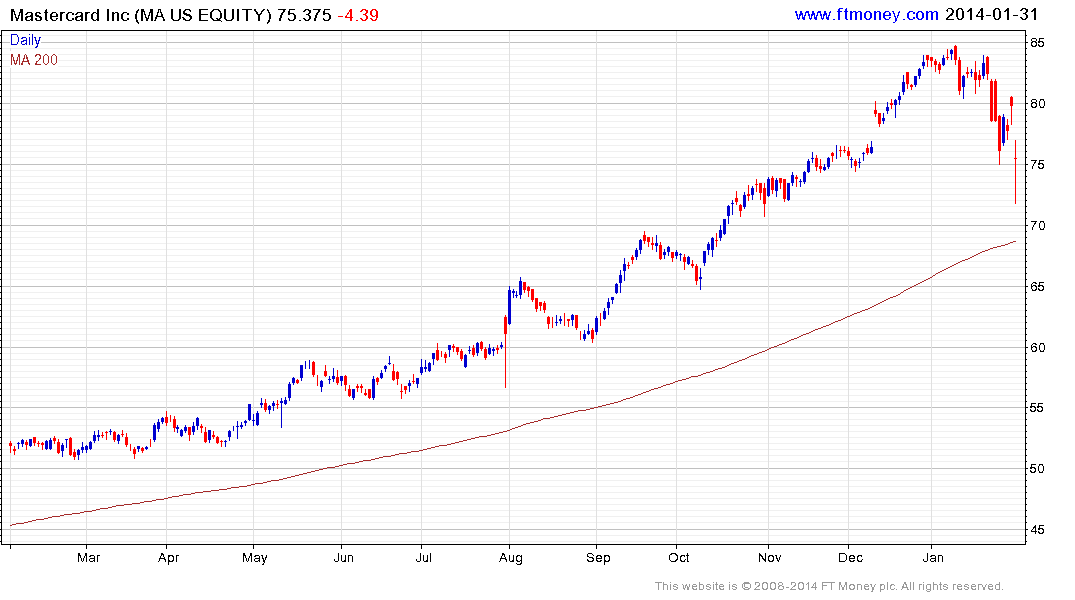 However, from the chart action a clear loss of uptrend consistency is evident. The acceleration of what had previously been a very steady uptrend was the first inconsistency. This portion of the advance resulted in a larger overextension relative to the 200-day than any in at least the last decade. This week’s downward dynamic broke the progression of higher reaction lows and will have shaken the confidence of those holding long positions. The share bounced from the region of the 200-day MA today but time will be required to rebuild confidence and the share will need to hold a higher reaction low before a move to significantly higher levels can be sustained.