Markets Without Havens Are Becoming All Too Real by Eoin Treacy

Although volatility has collapsed in the era of quantitative easing, in those periods when it has increased, it has generally risen unusually fast and created much pain for investors. Take the CBOE Volatility Index, or VIX. Even though it is more likely to stay below 20 these days, it is twice as likely to surge above 40 when it does rise. It doesn’t help that passive investment strategies make up half of all share trading, twice as much as 10 years ago, meaning there are fewer humans at the helm to make rational decisions when markets go haywire.

What’s more, market makers hold a tenth of the trading inventories they had in 2007, according to data from the Federal Reserve Bank of New York. As a result, they are unable to act as a sort of market shock absorber during periods of rapid price swings like they had in the past. That combined with capital flocking in and out of the same trades means markets are breaking down more often.

A good example comes from March, when exchange-traded funds owning investment-grade corporate bonds experienced price declines exceeding 10%, dropping 4% to 5% below their net asset values. Worried that the episode might cause credit markets to stop functioning, the Fed stepped into the markets to buy corporate debt for the first time.

2019 was one of the best years ever for the balanced 60/40 portfolio. That helps to highlight that it might still be premature to suggest the age of balancing bonds versus equities is dead. Obviously 2020 has been a very difficult year where risk takers have been rewarded and savers have been denuded of income. The challenge for long-term investors is the low interest rate environment distorts valuations so that momentum strategies tend to trump everything else.

This comparison of volatility indices for stocks, bonds and currencies highlights that the VIX is much more prone to extraordinary spikes than other assets. However, there is also clear evidence of correlation in volatility spikes across asset classes.

The primary reason this has not resulted in a serious problem is because the Federal Reserve has been willing to act as the central bank to the world. The reason markets remain steady now and can hold all-time highs following a cataclysmic event is because of faith in the availability of additional credit and liquidity.

The one thing no one is willing to countenance at present is higher interest rates. Yet over the last couple of years bond investors have been prone to extreme views at important peaks and troughs. 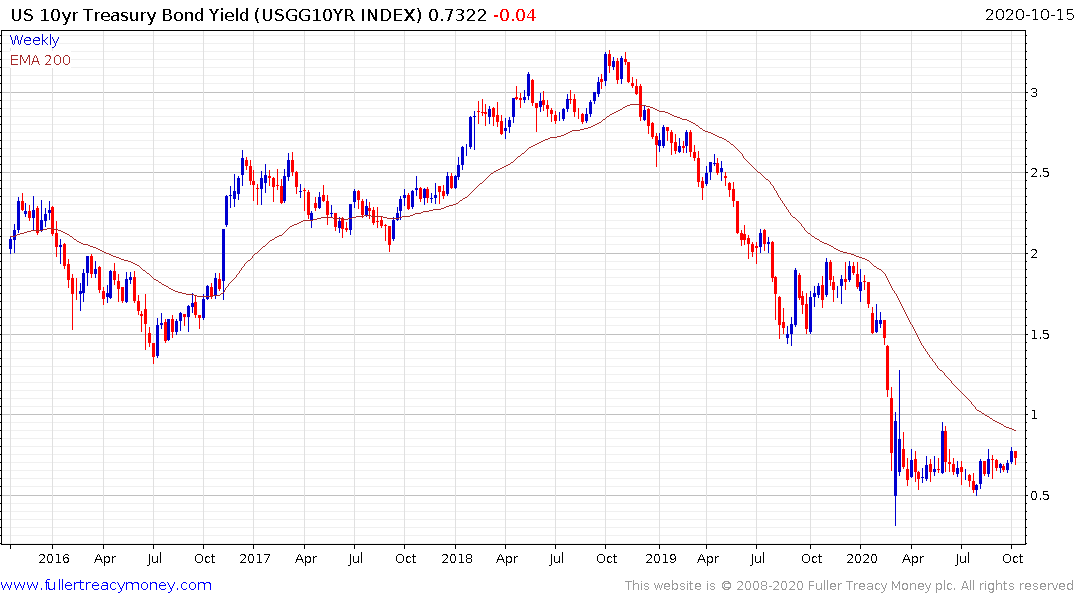 Back in 2018 when the 10-year Treasury yield briefly surpassed 3.25% the consensus was that inflation was upon us and the end of the secular bond bull market was obvious.

In March, the consensus was that bond yields were on the cusp of going negative and that deflation would result in all bonds everywhere having a negative yield.

Today, the consensus is that bond yields can’t possibly rise. The repercussions of such an event are almost too immense to contemplate because debt accumulation has been so pervasive and accelerated this year.

Nevertheless, the longer we go without clear additional new support from governments and central banks, the greater the pressure on yields to rise. In the absence of fiscal assistance, the onus for additional support will fall more heavily on the Fed. A break higher in long-dated yields may be the catalyst for the next found of money printing.