India’s government has won a resounding reception from investors and credit-rating firms for its unprecedented pledge of 2.11 trillion rupees ($32 billion) in capital for the country’s beleaguered state banks.

The move, which drove an index of government-run banks up as much as 26 percent, is part of Prime Minister Narendra Modi’s goal to help lenders meet tighter capital-reserve requirements, as slower economic growth and falling demand erode borrowers’ ability to repay loans. Soured debt is now the highest since 2000, hampering credit expansion that’s needed to spur Asia’s third-largest economy.

“The proposed infusion is a sizable jump over what had been pledged before as India is seeking to plug a large part of the core equity gap at the state-run banks,” said Jobin Jacob, a Mumbai-based associate director at Fitch Ratings Ltd. This addresses “weak core capitalization, one of the key drivers for our negative outlook on the South Asian nation’s banking sector.”

Moody’s Investors Service analyst Srikanth Vadlamani said the move is a “significant credit positive” for India’s state- run banks. The amount of capital pledged is enough to address the lenders’ solvency challenges and recapitalize them adequately, Vadlamani, who is vice president of the financial institutions group at the unit of Moody’s Corp., said by phone.

Non-performing loans have been one of the biggest concerns of international investors in India over the last few years. Despite the obvious benefits of digitisation of the economy, the upgrading of mobile networks from 2G to 4G and the slow and steady pace of reform, the parlous condition of the banking sector was the one reason I heard more than any other that deterred investors from participating in the Indian market.

The re-capitalisation of state banks is a major undertaking and a further signal that the Modi administration is willing to take bold steps to ensure the economic expansion remains on track. This measure represents a catalyst for outperformance by the banking sector but if today’s performance is any guide it offers a relative advantage to state owned banks. 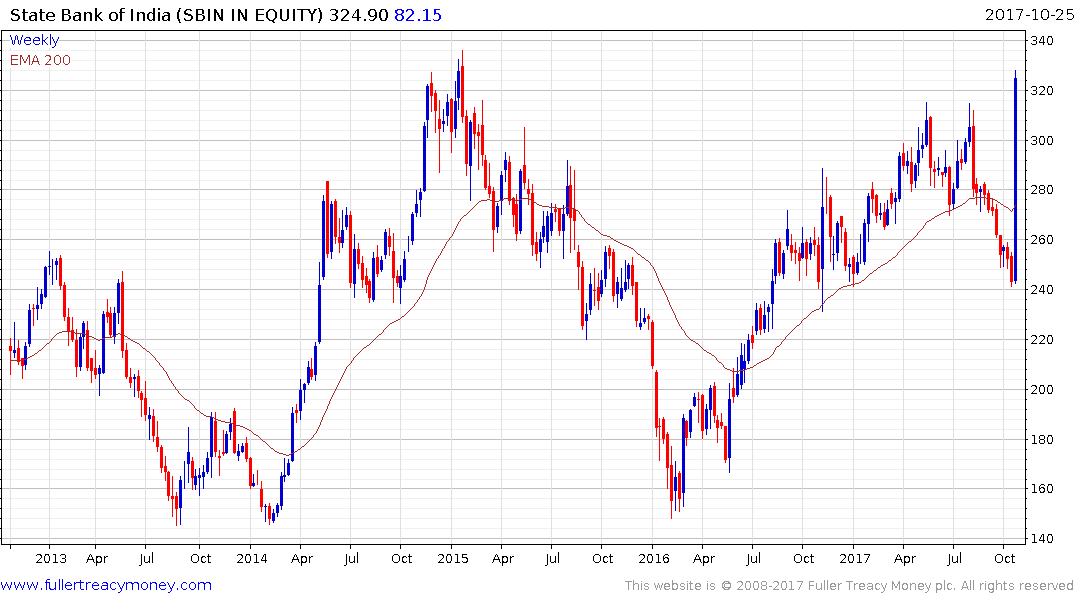 For example, State Bank of India surged higher today to test the upper side of a seven-year range. 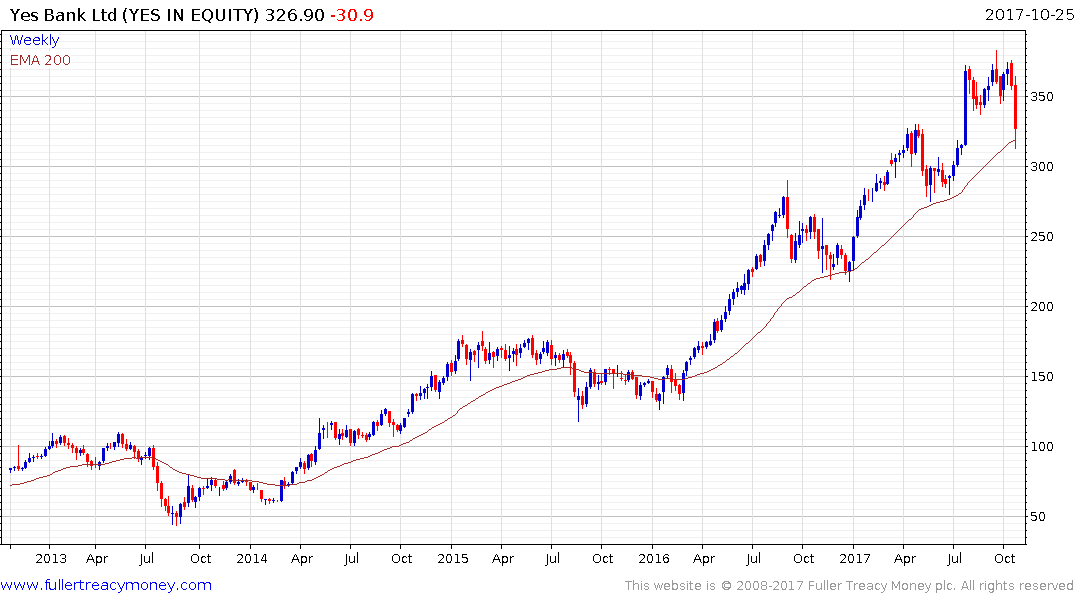 Yes Bank, which is privately held, pulled back to test the region of the trend mean and will need to hold this area If the medium-term uptrend is to remain consistent. 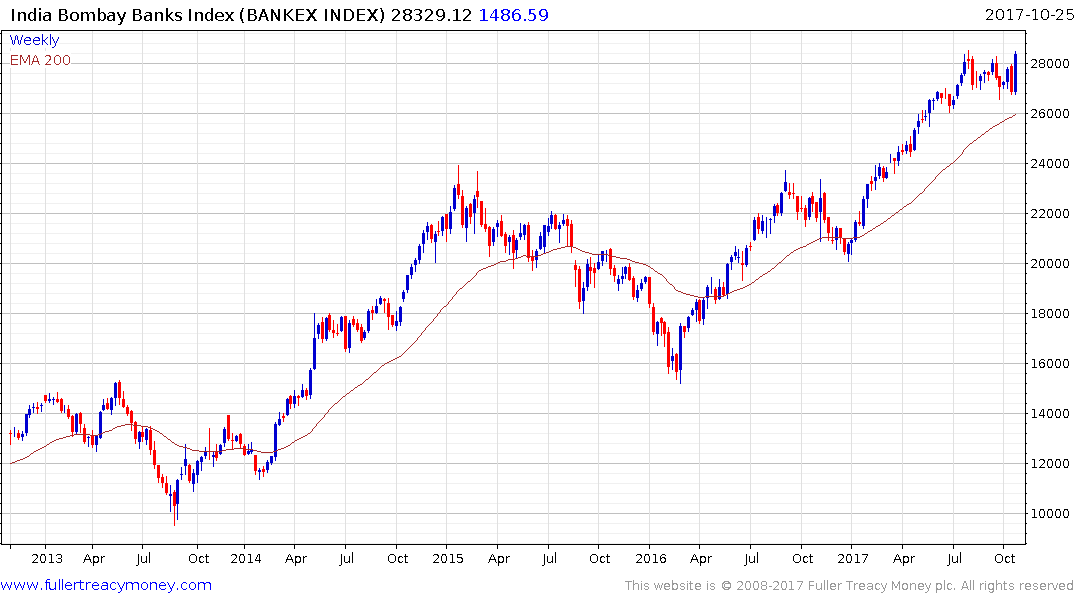 The Bombay Banks Index has often led the wider market. On balance it remains in a consistent uptrend, with today’s upward dynamic confirming support in the region of the trend mean. 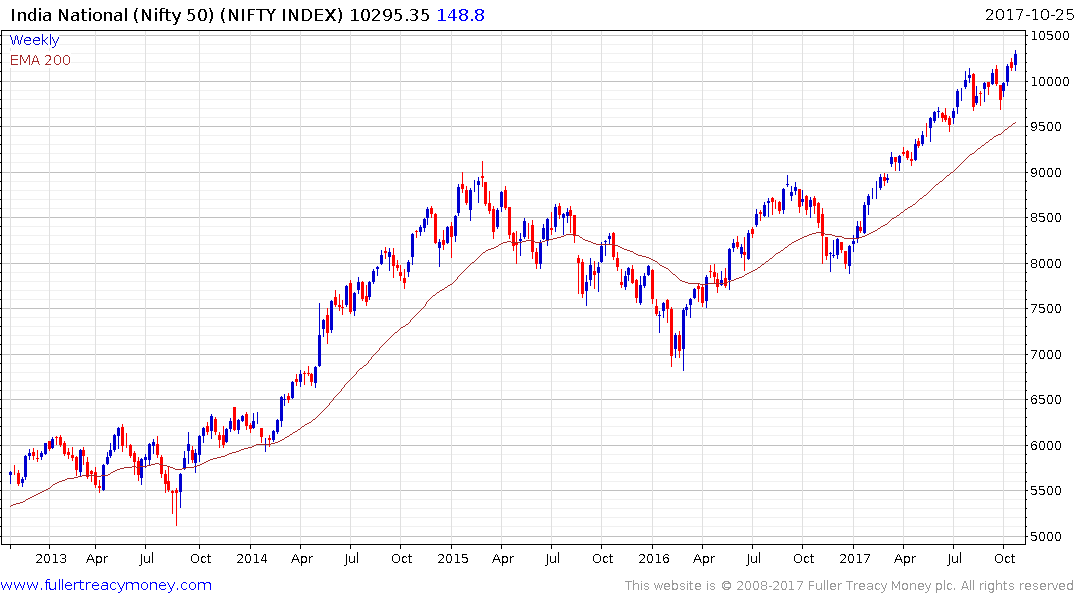 The Nifty Index has been ranging in the region of the psychological 10,000 level since August and broke out to new highs today.