Markets Conclude U.S. Is Riskier Than China
Comment of the Day

Markets Conclude U.S. Is Riskier Than China by Eoin Treacy

They would be pricing in various economic realities: the slowing rate of U.S. economic growth, the U.S. government's exploding debt, the diminished Treasury revenue caused by the 2017 tax cuts, and the Fed's pursuit of a monetary policy keeping rates well above their average for the decade.

Investors see growth slowing, and it shows. Extreme fluctuations in the stock and bond markets the past month reflect investor anxiety over the transition from a brightening economy to the creeping sense that the best of this cycle has come and gone.

U.S. government debt is also moving in the wrong direction. Since 2016, when the federal budget deficit as a percentage of gross domestic product declined to a decade-low of 2.2 percent from more than 10 percent in 2009, the deficit nearly doubled to almost 4 percent. GDP increased to a record $19.39 trillion at the end of 2017 as the annual rate climbed to 2.2 percent from 1.8 percent in 2007. But U.S. growth will deteriorate to an annualized 1.9 percent by 2020, according to economists surveyed by Bloomberg, putting more pressure on the widening deficit. Revenue isn't stepping in to close that gap. The Trump tax cuts are estimated to increase these deficits by $1 trillion during the next 10 years.

China can borrow at cheaper rates than the USA right now. Is that a big contrary indicator or is it the shape of things to come?

The clear difference between the two countries is the USA is dependent on foreign buying to fund its deficits while the majority of China’s debt is held internally. Logically, the USA’s deficits are a disincentive for investors to continue to support Treasuries when there are more credit worthy borrowers out there. The big hole in that argument has been the strength of the Dollar versus the Renminbi.

If the USA is such a terrible place to invest, the Dollar would be declining. There is a clear consensus that it will collapse but it has not done so yet. At a minimum it will need to sustain a move below its trend mean against any currency one wishes to compare it to before we will have clear evidence of a change of trend. 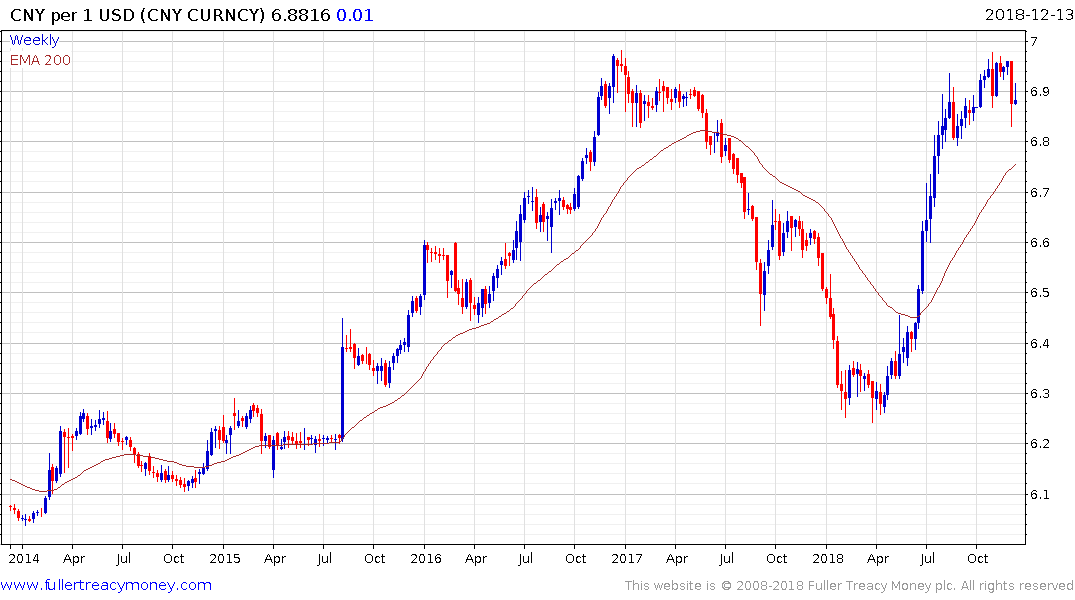 The advance in short-term Treasury yields is closely tied to the desire to return interest rates to some sense of normalcy. Meanwhile China’s 12-month deposit rate has been held at 1.5% since late 2015 and there is no clear route to raising it considering the headwinds currently being experienced by the economy. Therefore, the relative premium Chinese bonds are trading at to Treasuries is unlikely to hold.