I have to admit I don’t look at the internals of the market all that often because it is the trend rather than the day to day moves which lend some insight into the health of the market. I thought it might be useful to look at some of the most common measures to discern if any clues to market direction are evident.

The Total Number of New 52 Week Highs on the NYSE Index is coming back down towards the lows December 2018 and towards the end of 2015. The significant spike on the upside in late 2017 was an anomaly suggesting a period of underperformance ahead, but generally lows are better predictors of market bottoms than spikes are of tops. 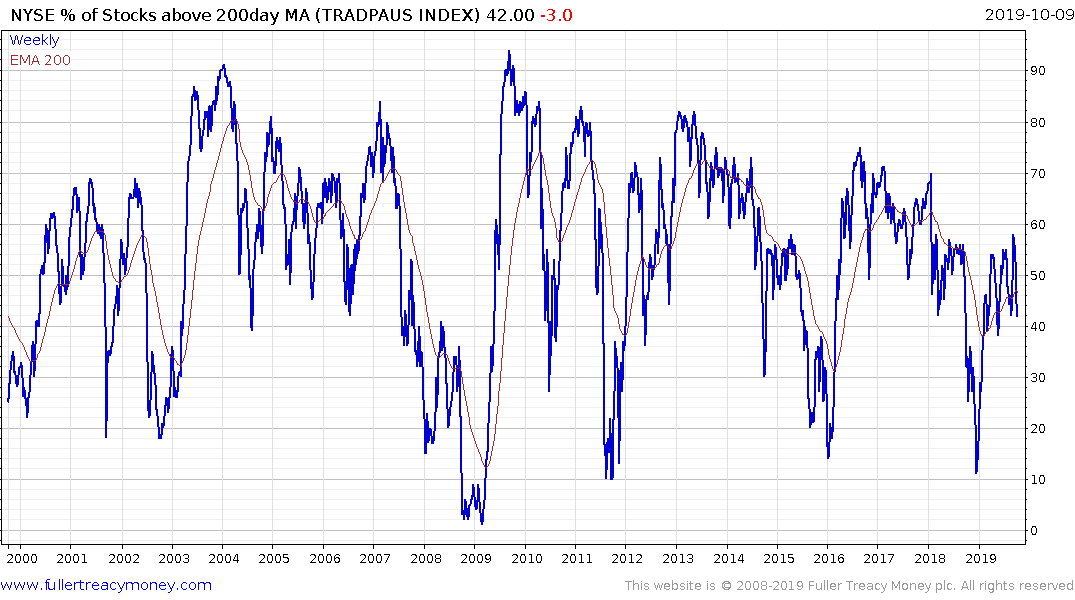 The number of stocks trading above their 200-day MAs is also a better predictor of bottoms than tops and was particularly prescient in December. 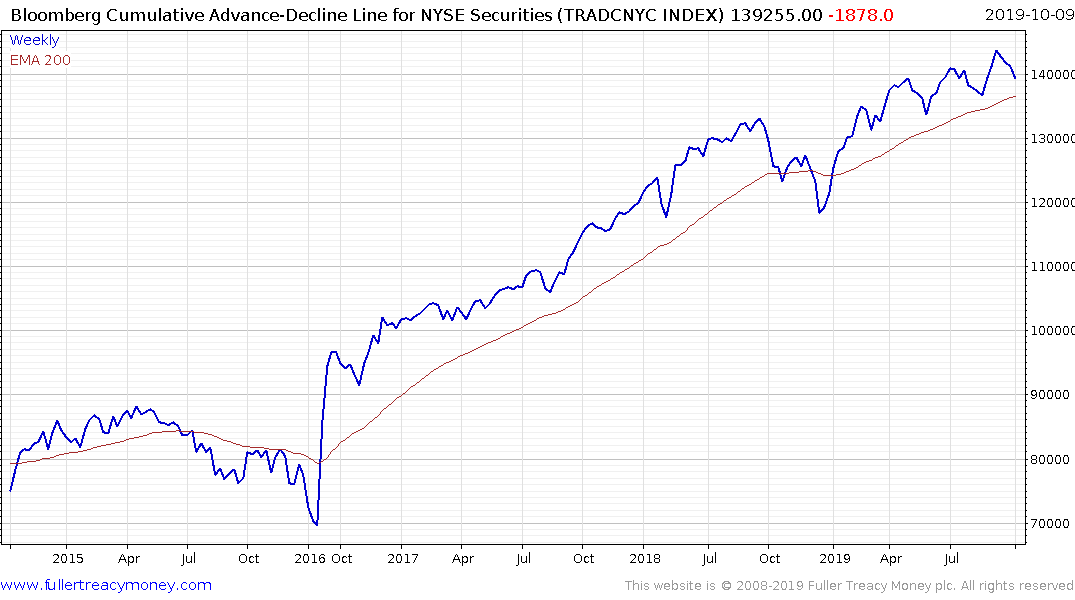 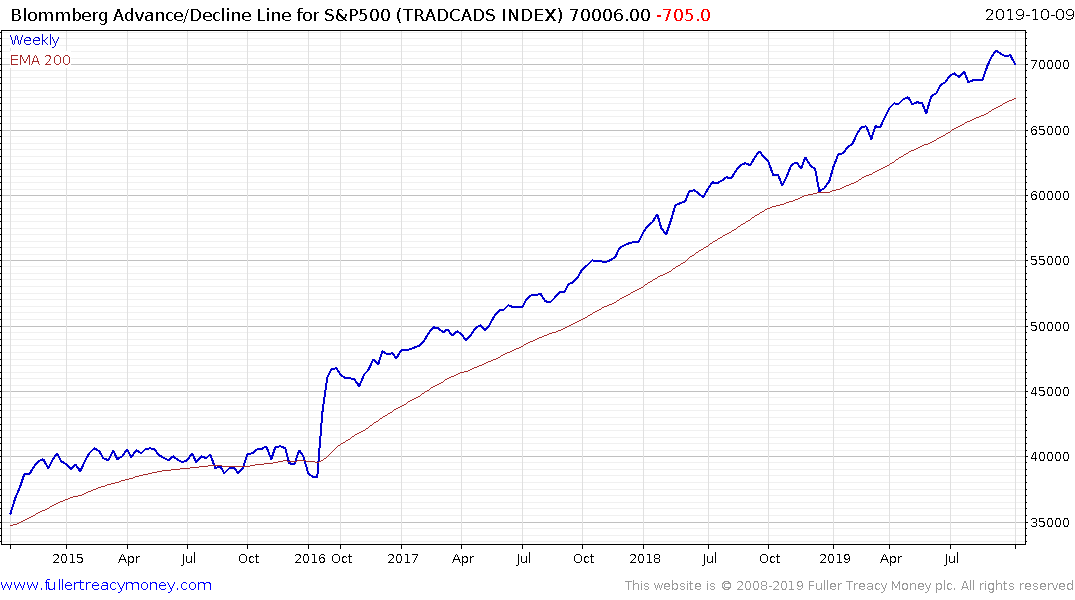 The Advance - Decline Lines for the NYSE and S&P500 are both still trending higher which is supportive of the view, the market will break on the upside.

The Advance - Decline Line for the Nasdaq Composite is ranging with a downward bias which is a negative.

The Arithmetic Value Line looks pretty much identical to the Russell 2000 and needs to break out of this year’s range to confirm a return to demand dominance.

The iShares Edge MSCI USA Quality Index continues to outperform and is currently bouncing from the region of the trend mean and the September 2018 peak. 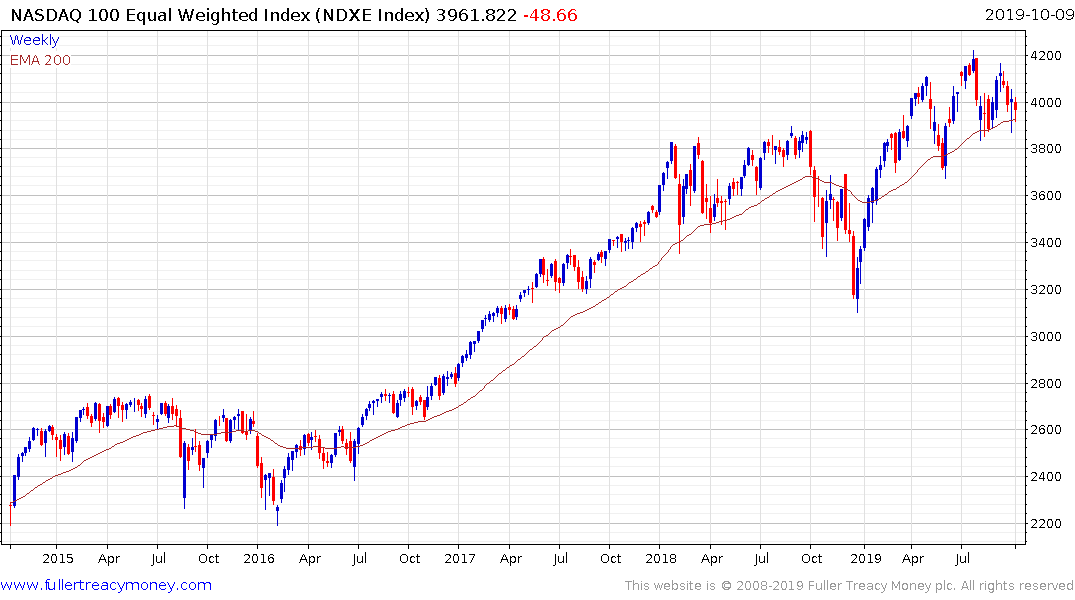 The Nasdaq-100 Equal Weighted Index continues to consolidate above the 2018 range. 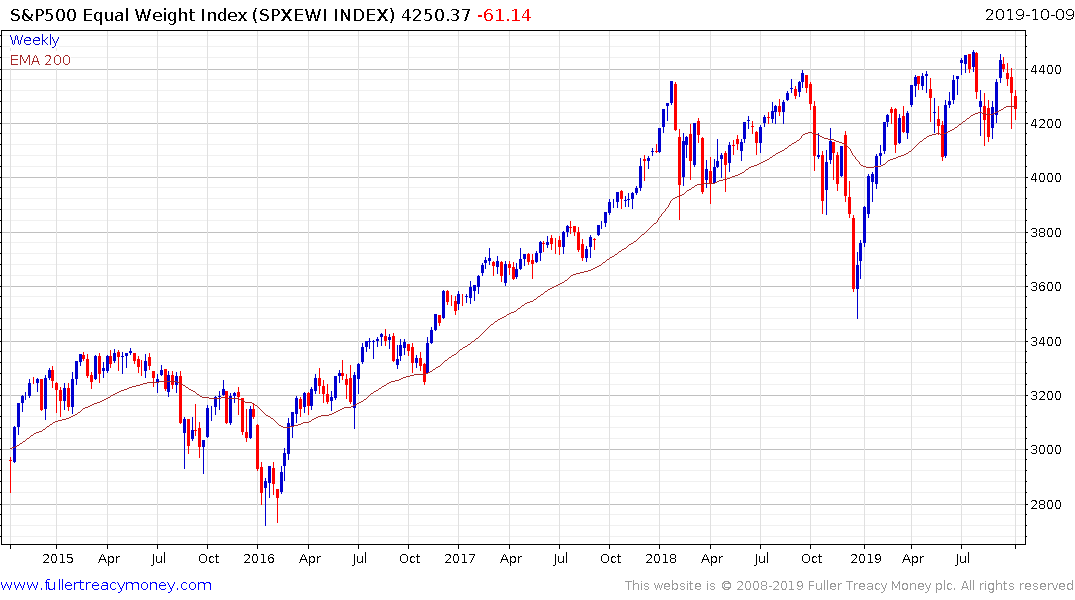 The S&P500 Equal Weight Index has been ranging for 21 months and continues to bounce from the region of the trend mean. 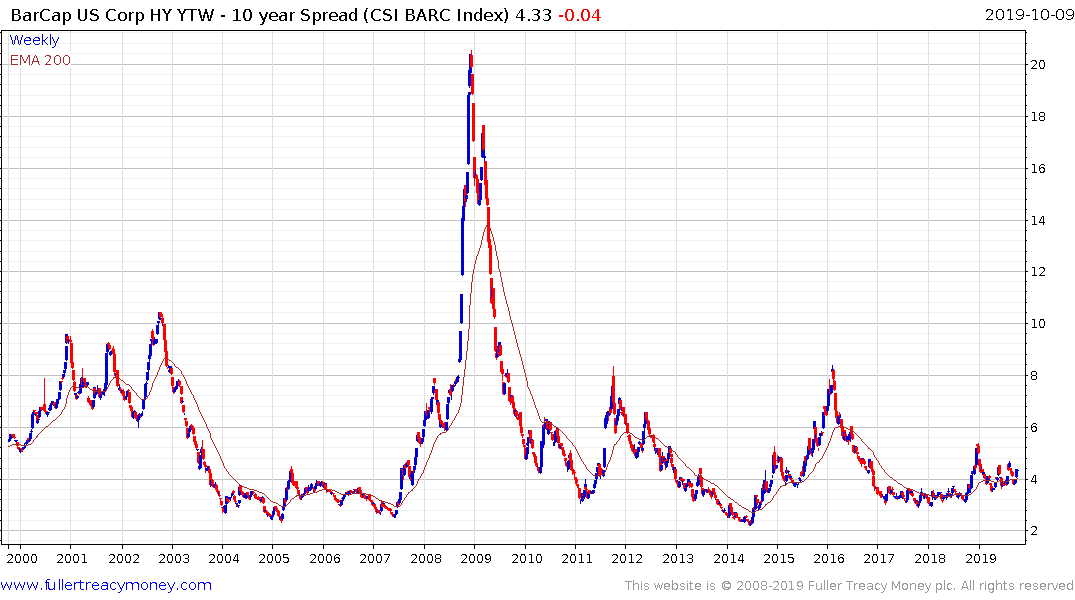 High yield spreads remain contained but exhibit first step above the base characteristics. That suggests it is only a matter of time before we see a sustained move above 500 basis points which is generally consistent with selling pressure in the stock market. 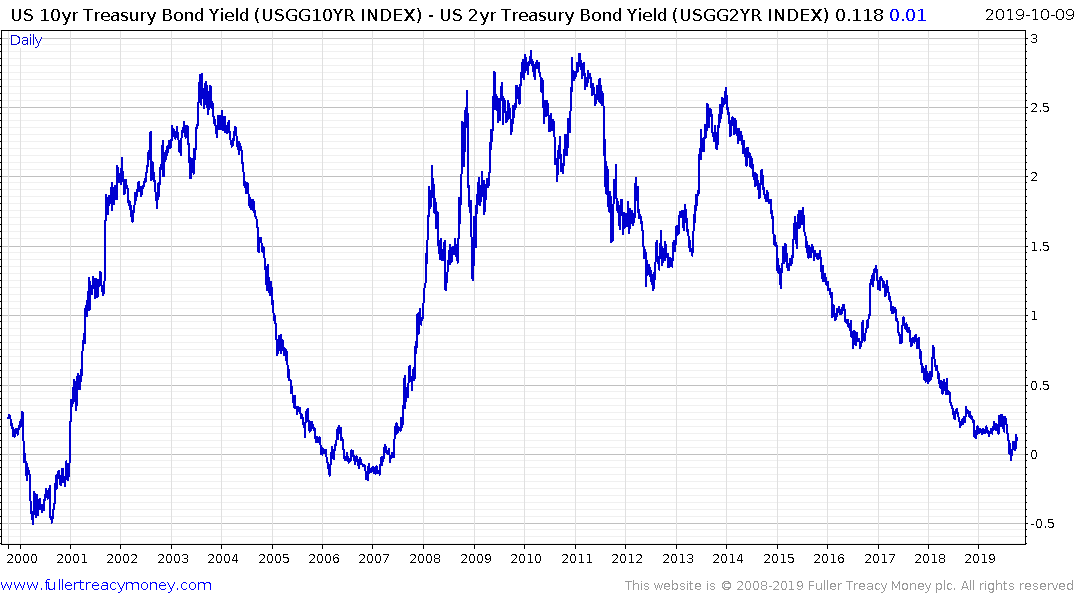 The US yield curve inverted for a couple of weeks in September and that is supportive of the view a growth shock is impending. My visit to a customs warehouse in Los Angeles on Tuesday supports that view. Where there are usually up to 10 forklifts zooming around on Tuesday there were two and they were not busy. That’s not normal for the inventory build ahead of the holiday season.

Considering the negativity being expressed in the media and among investors we can conclude that if investors do not already have a lot of cash, they have at least introduced stops. The ranging environment, which has prevailed on Wall Street over much of this year and indeed since the initial peak in 2018, is not going to persist indefinitely. When the breakout comes it is likely to be both surprising to market participants and emphatic in nature.

My gut tells me we are late in the cycle but we’ll get a bubble before the decline. A break below the 200-day MA, with major indices subsequently encountering resistance in the region of it would clearly negate that view.

What we certainly know is large cap tech is still steady, quality is outperforming and small/mid-caps are underperforming. That is generally late stage activity.

So where is the epicentre of risk? Where are the problems that could lead to a crisis likely to emerge from? Two immediately spring to mind. Leverage loans and China. 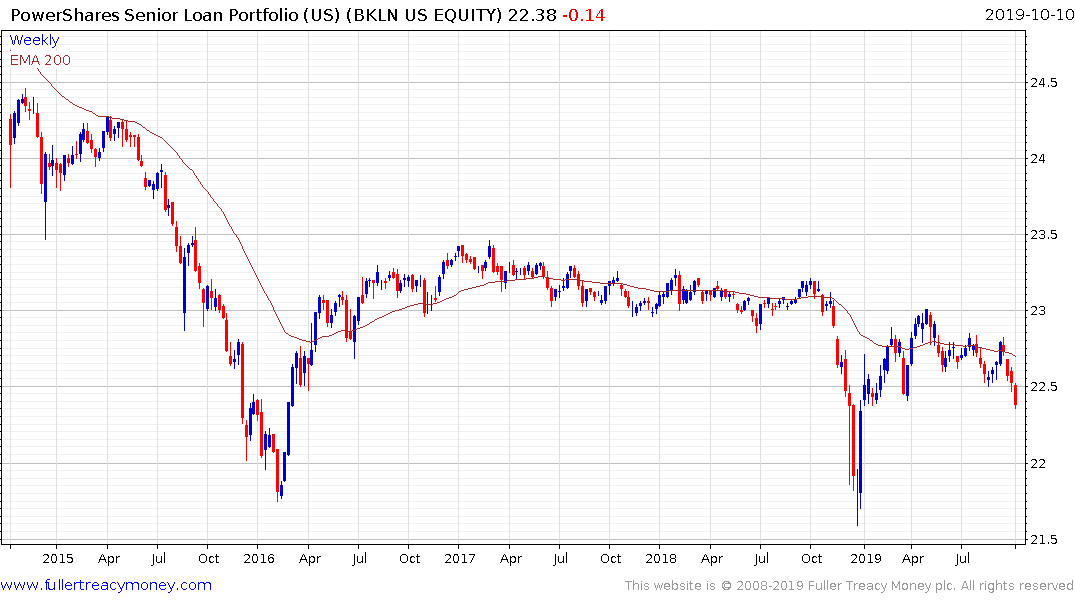 The Invesco Senior Loan ETF has been subject to some acute bouts of volatility and is breaking downwards again. This market is a euphemism for private equity where some of the largest players are active raising cash. Meanwhile retail investors are flooding into peer to peer leading programs where due diligence is a fantasy. This $1.2 trillion market is ripe for a correction and the failure of some high- profile fund managers, because of positions in highly illiquid instruments is a cautionary tale.

The big question for China over the next 12 months is whether a cease fire in the trade war can be agreed to. That would lend fuel to emerging markets, commodities and commodity exporters, luxury goods and other China dependent sectors. Concurrently, it would weaken the Dollar which has been a significant headwind for global liquidity this year. Without a deal, a continued global slowdown will pressure these sectors even further. 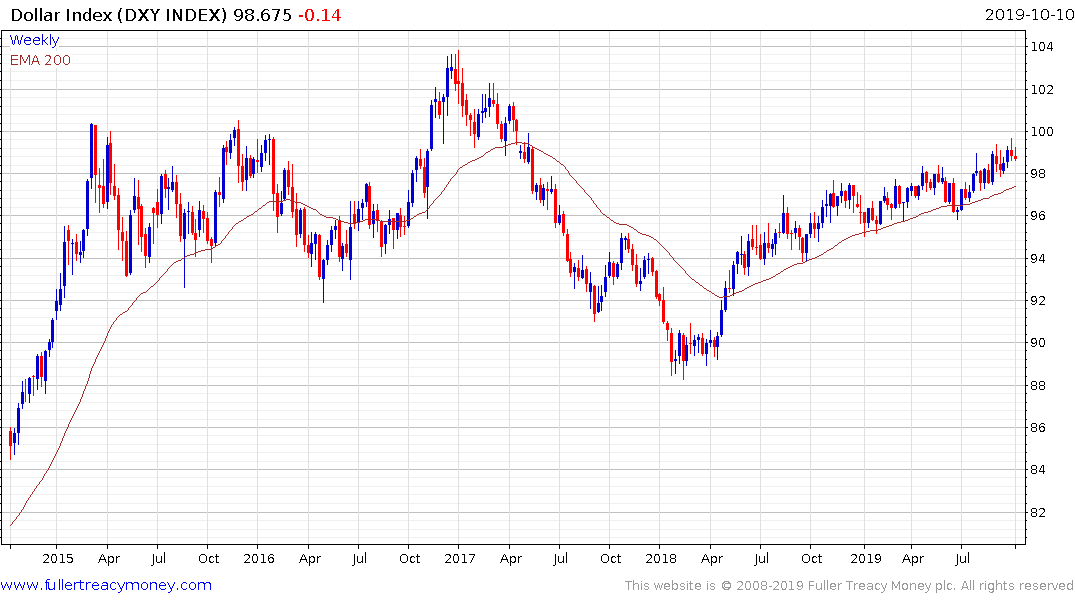 The compression of the trading ranges on major indices reduces the argument to a binary option. Either we get at least a partial resolution to the trade war and break on the upside, or we don’t and recession risks continue to mount which would suggest a break downwards. 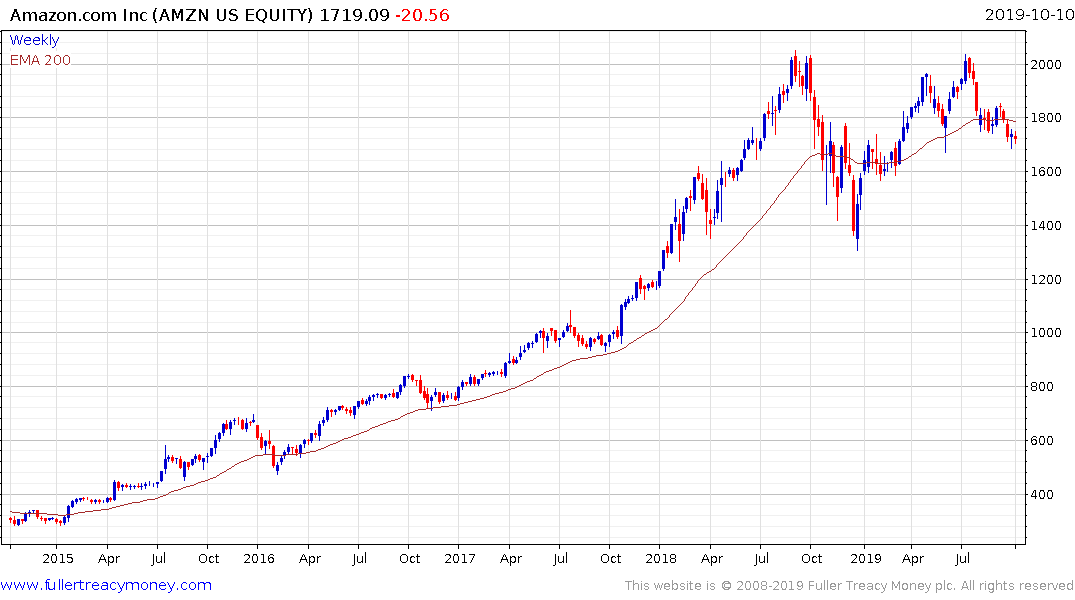 The one share worth monitoring for its impact on the market is Amazon. It has been among the best performers since 2009, it was briefly a $1 trillion company and it is leveraged to both the consumer via its market place and the corporate sector via its cloud platform. The share is testing the June low and needs to bounce back above the trend mean to signal a return to demand dominance. 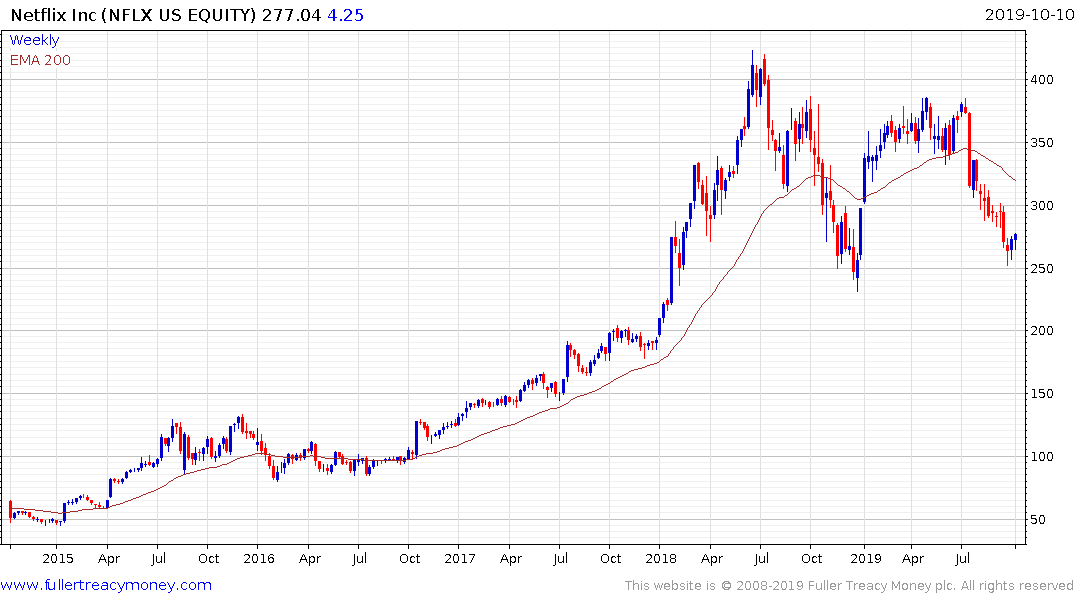 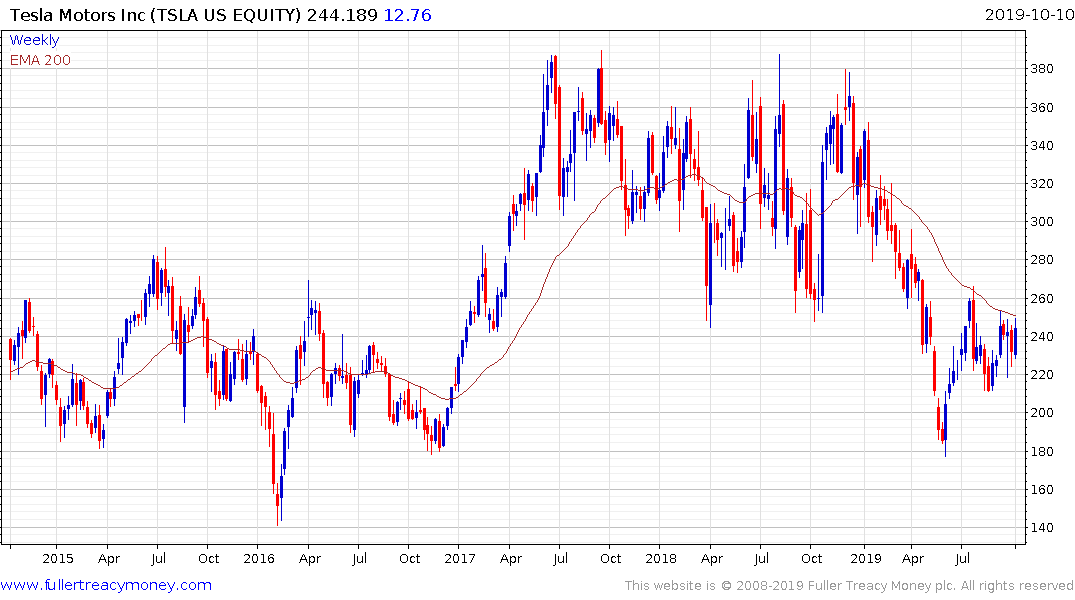 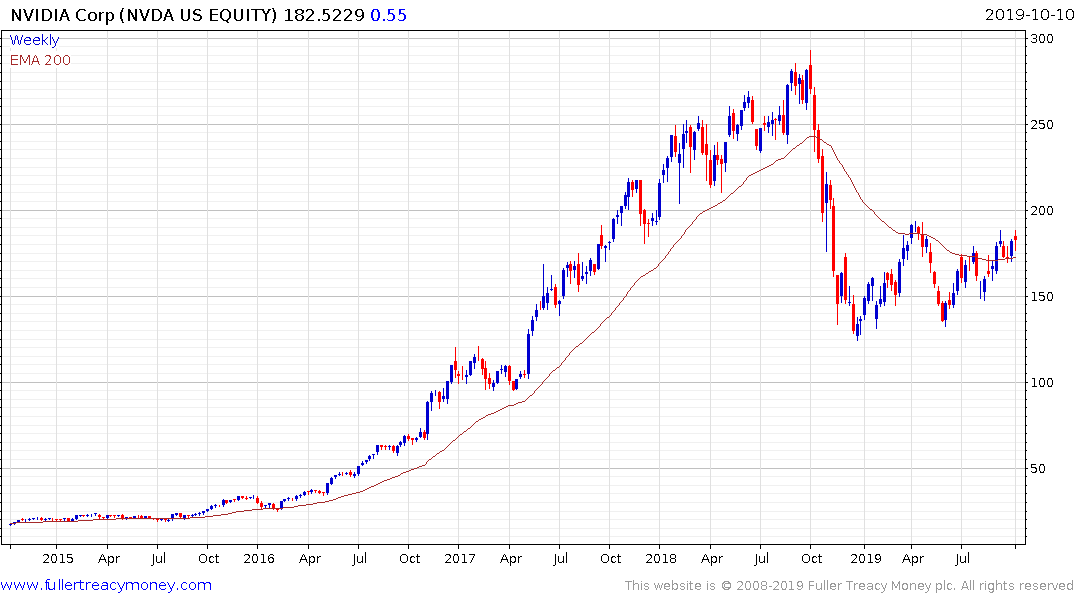 Leaders tend to lead in both directions and the underperformance of Netflix, Tesla, NVidia and Amazon are not encouraging for the medium-term outlook.