While bond markets are rallying as investors wager the data will trigger a rate cut from the Reserve Bank of India, the figures signal the economy faces hurdles even as the stock market surges to a record, the rupee rallies and the world’s major economies head into an era of higher borrowing costs.
There’s a realistic chance of a 25-basis point rate reduction in August, Indranil Pan, chief economist at IDFC Bank Ltd., said. “It could be a very close call as the RBI is expected to remain cautious of the international rhetoric of tighter monetary policy and unwinding of quantitative easing," Pan said in a note.

Some of the pessimism stems from the fact that is India is still recovering from a cash ban that interrupted employment for millions, forced farmers into fire sales of agricultural produce and bogged down the manufacturing sector. The introduction of a goods and services tax on July 1 only added to the confusion while a glut of bad loans means businesses are not borrowing to invest in Asia’s third-largest economy.

Bank credit to industry contracted in the year to May, while deposits surged following the ban of high-denomination notes in November, leaving the banking system grappling with surplus cash.

Data on Wednesday showed headline consumer price inflation fell to 1.5 percent in the year to June from an annual 2.2 percent a month ago and below forecasts for a 1.6 percent reading. That’s below the RBI’s medium term target of 4 percent and through the bottom of its 2 percent projection for the first-half. Core inflation, which strips out volatile food and fuel items, also slipped below 4 percent.

For long suffering investors who forced themselves to accept India’s persistently high inflation, weak currency and lumpy growth, the last year must feel like a blessing. The prospect of RBI rate cuts is
gaining credence and that is being reflected in the outperformance of the stock market. 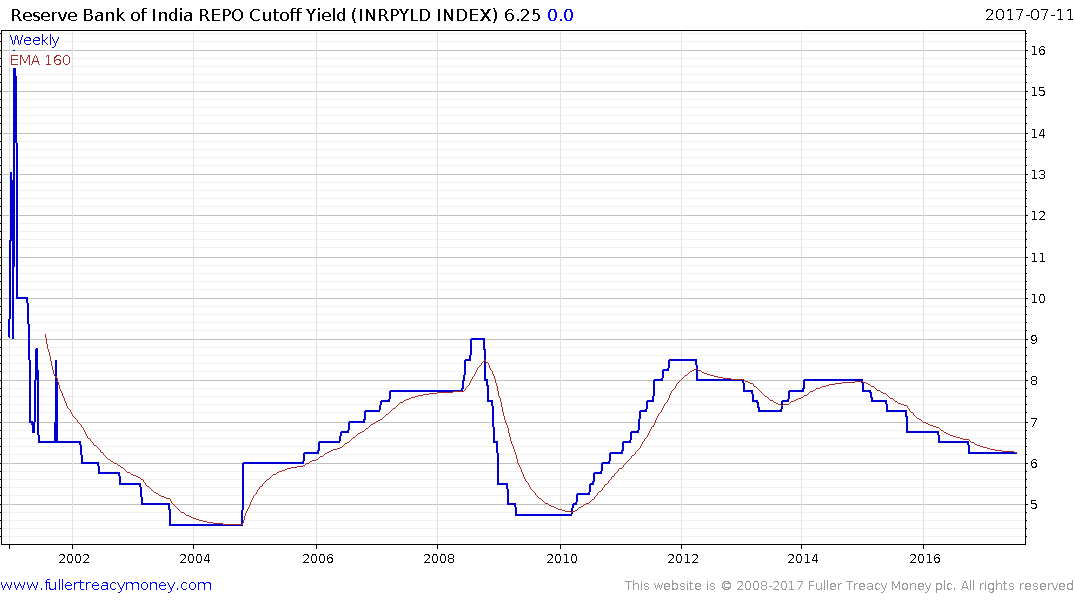 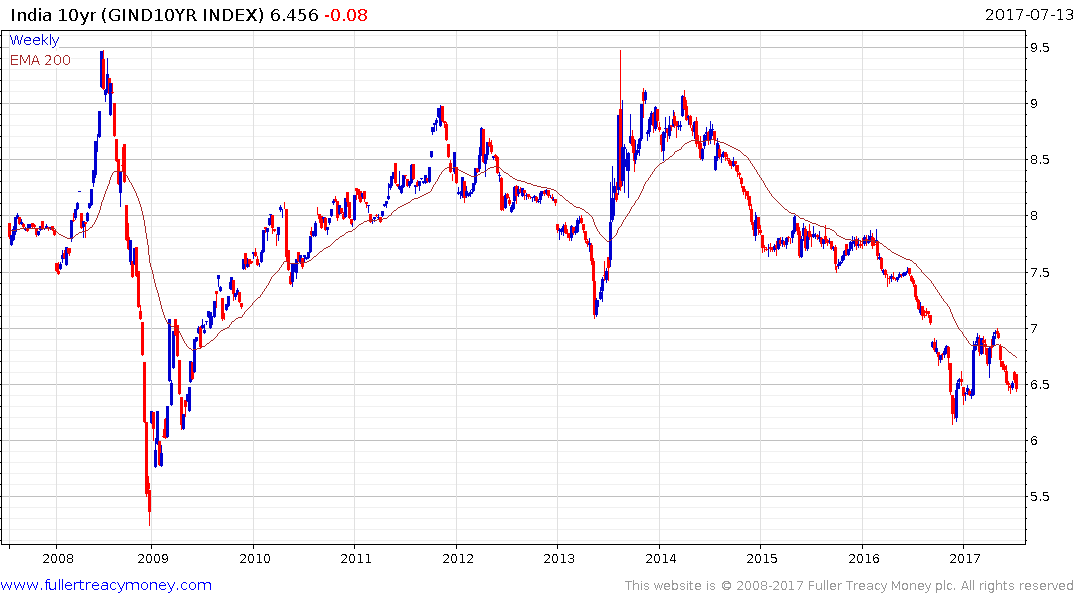 The RBI repo rate is currently at 6.25%, while the yield on 10-year bonds is 6.45% representing only a 20-basis point pick up on decade long maturities. That is a very flat yield curve and suggests the central bank is potentially close to the top of a tightening cycle. 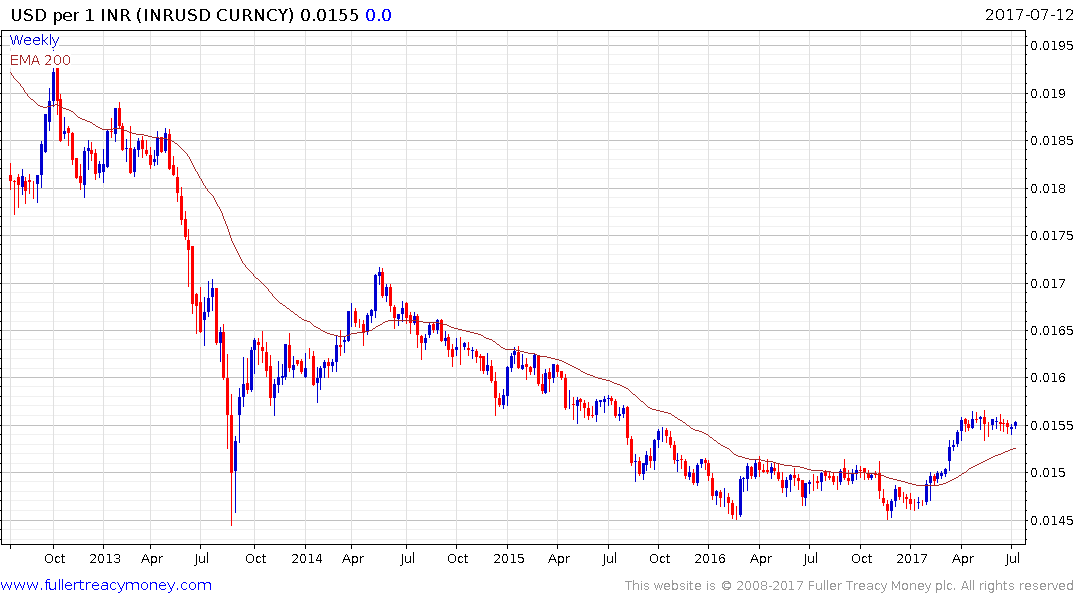 The Rupee has been ranging since April in what has so far been a relatively inert process of mean reversion as it forms a first step above the 2016 base. 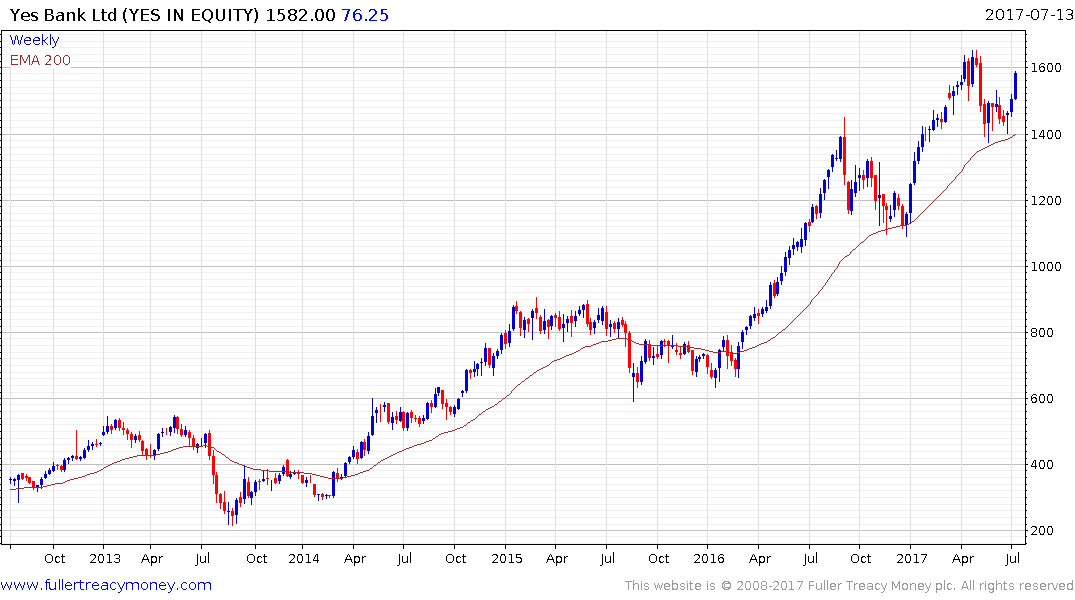 Meanwhile, Yes Bank which is viewed by many institutional investors as a bellwether remains in a consistent medium-term uptrend. 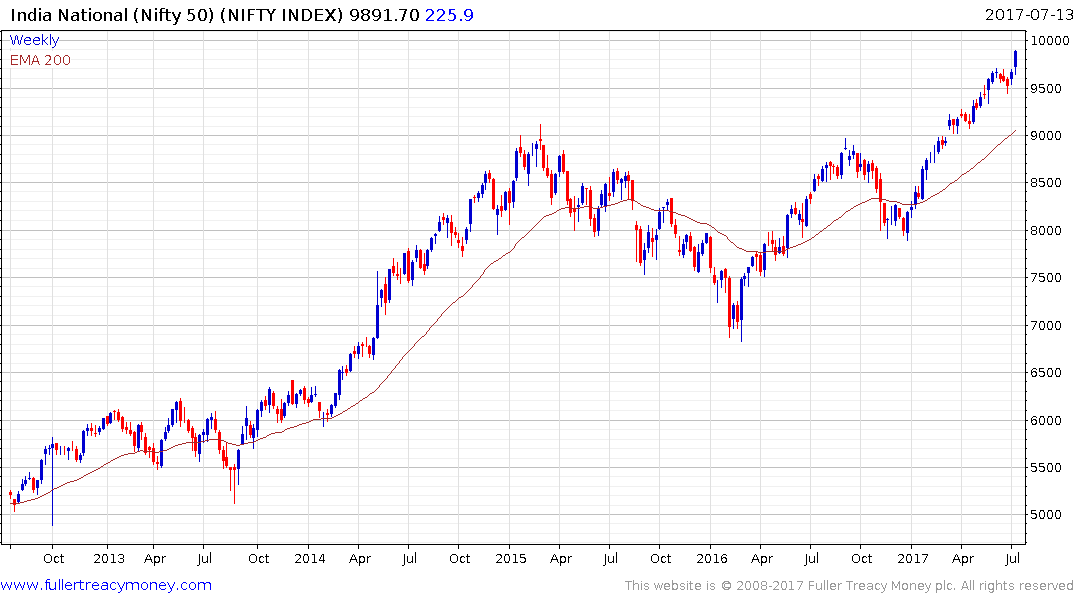 The Nifty Index is rallying towards the psychological 10,000 level and while some consolidation in that area is certainly possible a sustained move below the trend mean would be required to begin to question medium-term scope for additional upside.