Margin calls are the likely culprit behind a slump in Treasury futures that sunk a popular hedge fund trade in recent weeks. Funds who had been making highly-leveraged bets on price moves between Treasury futures and bonds saw their positions collapse when investors hit with margin calls sold the contracts.

Some of the recent dollar strength may also have been driven by margin demands. South Korean brokerages who hedge their exposure to structured products with dollar-denominated derivatives positions are facing calls, forcing them to scoop up dollars. In gold, investors liquidating bullion holdings to raise cash have been blamed for the metal’s epic slump.

Wild moves reign among risky assets like corporate bonds and oil -- opening up the possibility of more margin stress.

“Half the people we talk to think the current environment is worse than the financial crisis,” the Wells Fargo strategists wrote.

The Volcker Rule was designed to cut banks out of the shadow banking sector. Instead it created an additional step between how shadow banks can access liquidity and the central bank. Since banks were unable to go after the most lucrative leveraged trades, they instead provided macro hedge funds with the capital required to pursue these strategies.

The massive swift decline in oil prices was probably the catalyst for a spike in volatility that caused a cascade of deleveraging in macro trading accounts. The decline in financial asset prices that caused contributed to the swift actions of central banks to extend liquidity and open cross currency swaps with more countries. However, it also resulted in a swift set of actions by cities to introduce actions to slow down economic activity which is exacerbating the troubles macro funds are experiencing. It remains highly likely some of the largest, most high profile, hedge funds are going to dissolve before this crisis has run its course. In fact, that will probably be the catalyst for a medium-term market low. 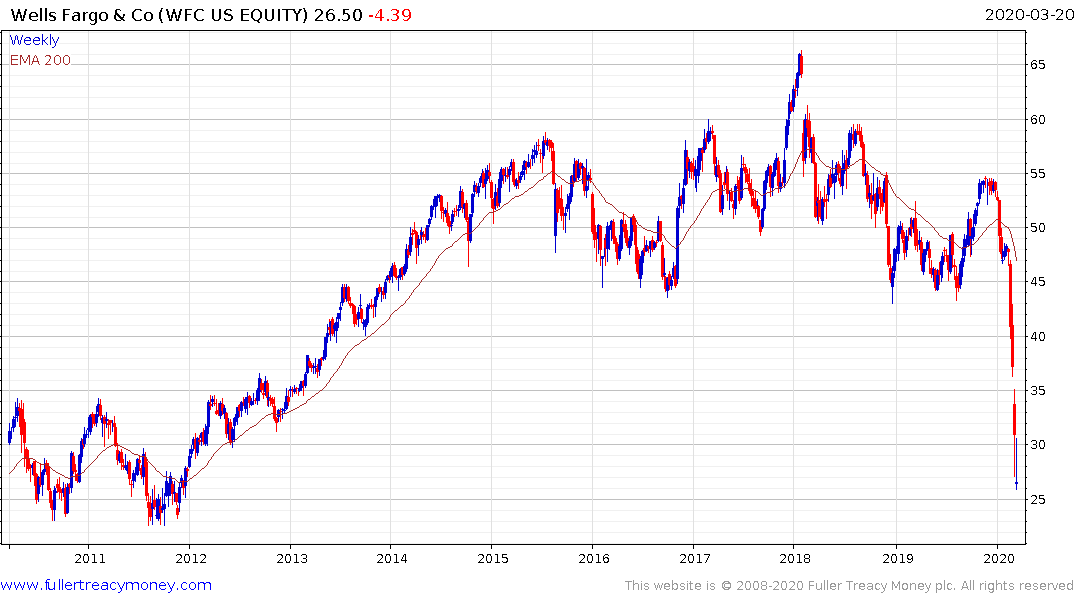 Wells Fargo was particularly aggressive in pursuing the business of hedge funds so they have some insights into how illiquid the market for credit is. The share is down from $55 to $26 and change but it has a great deal of exposure to what is the epicentre of risk right now.

That’s the biggest point. Everyone is worried about the coronavirus and that is a problem. However, the impact of the virus is short term. The exodus of money from the bond market and drawdowns from bond ETFS is a much bigger issue. There is a solid argument for bailing out airlines, hotels, retailers etc even if it does lead to abuses. The problem is with the leverage in the financial sector which is now unwinding rapidly. This is not something that is going to be solved quickly and not least because we are certainly on the front end of a recession. 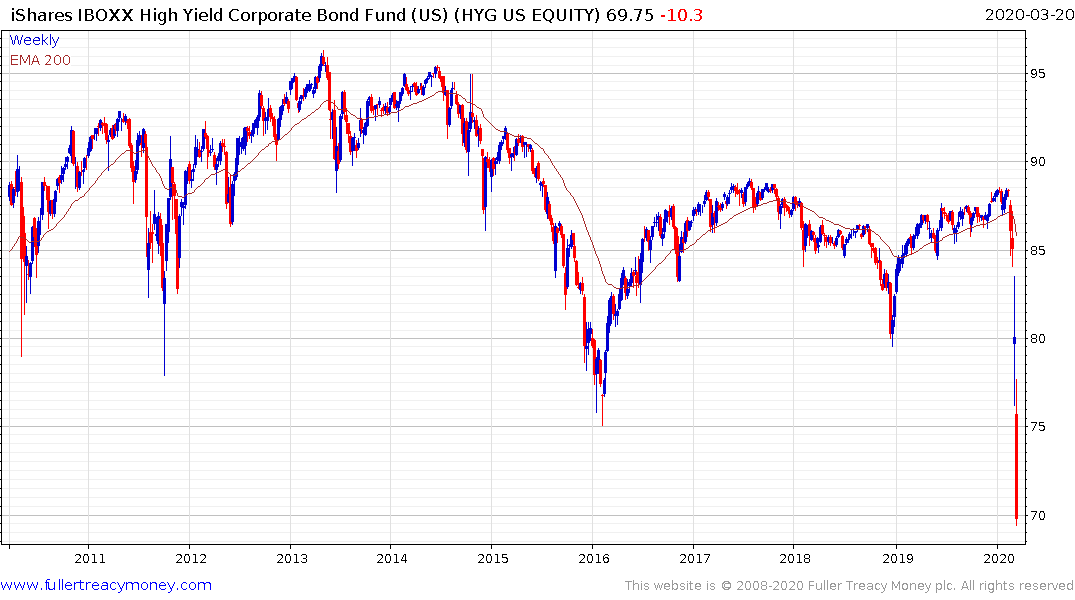 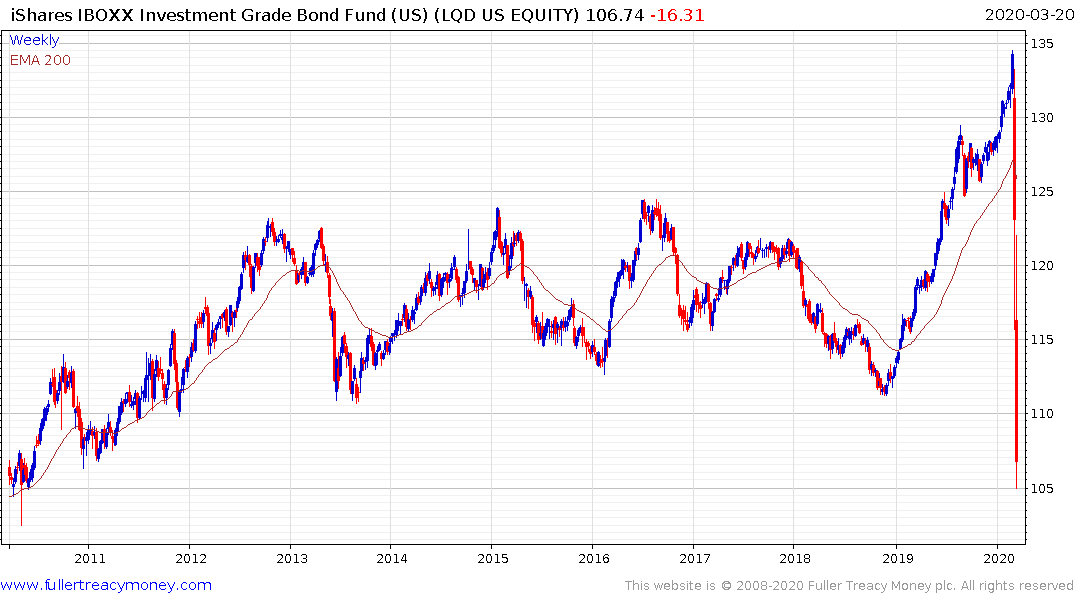 The iShares iBoxx $ Investment Grade Corporate ETF (LQD) has collapsed over the last month and has in fact fallen more than the high yield ETF (HYG). That is the initial sign we are seeing selling in advance of a fallen angel problem so it is reasonable to expect high yield to play catch up. 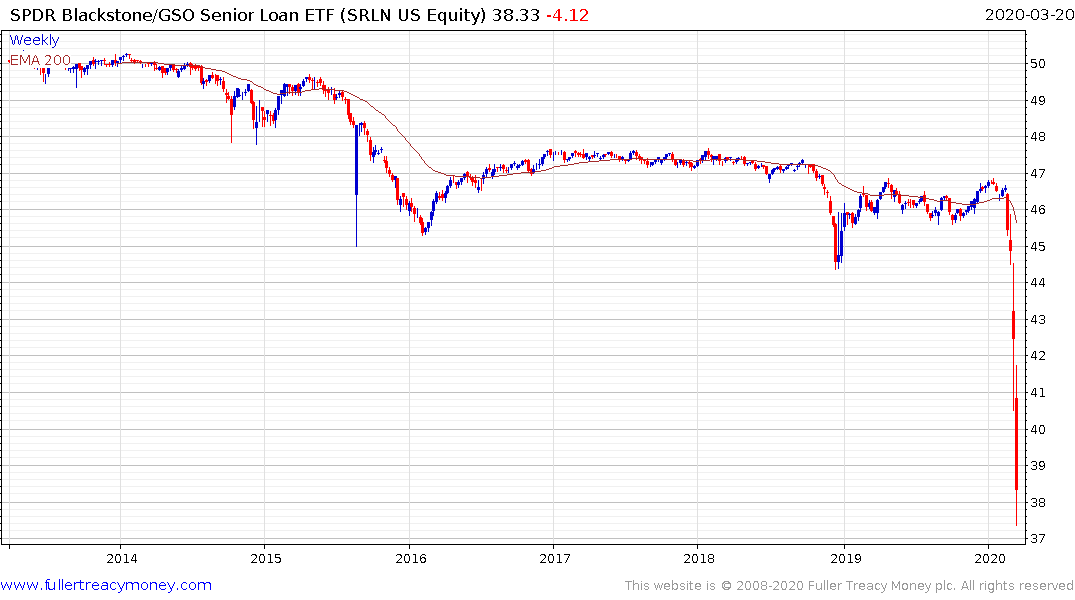 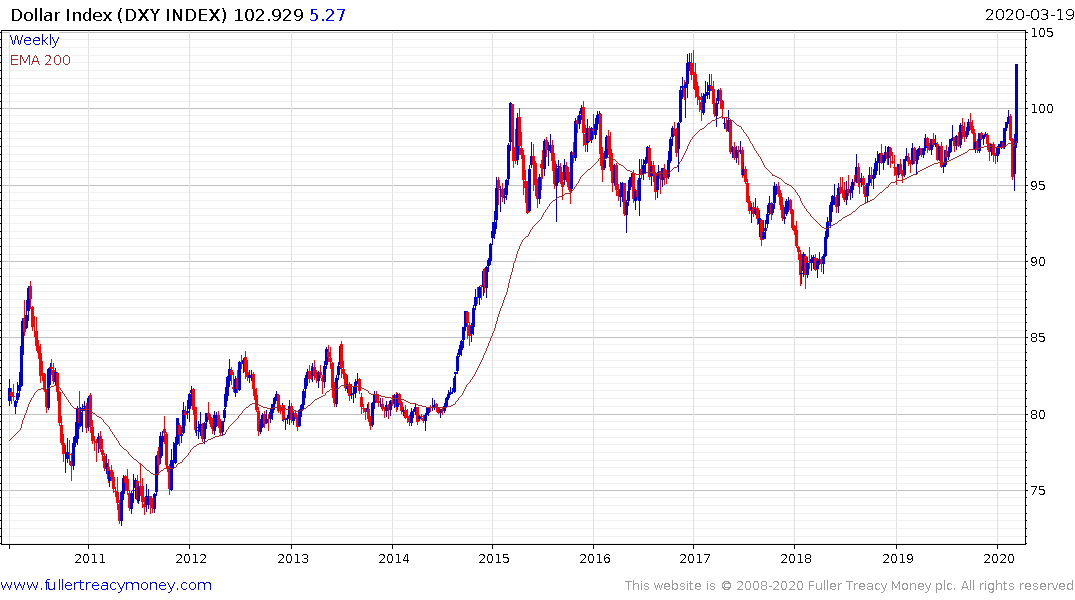 The Dollar reversed its intraday decline today to finish in positive territory. As long as the Dollar continues to firm, we can conclude credit market tightness is the defining characteristic of all asset classes.