Faster growth in orders and production in the final month of the quarter indicates solid demand that, together with rising exports, shows manufacturing is on solid footing. The ISM’s pulse of employment in the industry also indicates the government’s measure of factory payrolls, released as part of the Labor Department’s jobs report on Friday, will rebound in June after declining a month earlier.

The expansion was broad based, with 15 of 18 industries surveyed by the purchasing managers’ group posting growth in June. They included machinery, transportation equipment, computer and electronic products, and petroleum and coal products. The three reporting contractions were apparel, textile mills and primary metals.

The 2.9-point monthly gain in the ISM index, which was the largest jump since early 2013, is also notable as it comes amid fading expectations that the government will deliver a fiscal boost, via tax reform and infrastructure spending, in the near future.

Official’s View
“Everything was strong,” Timothy Fiore, chairman of the ISM factory survey committee, said on a conference call. Unless supply-chain constraints arise, “there’s really no reason” why the robust pace of manufacturing can’t continue, he said. At the same time, manufacturers are awaiting more clarity on potential policy changes such as taxes, regulations and tariffs on imported materials including steel, Fiore said.

Purchasing managers index figures for a number of countries came out today with positive figures for the USA, China, Europe and Japan all helping to confirm we are in a period of synchronised global economic expansion. With that view gaining increasing credibility it is acting as a catalyst for rotation in the wider stock market as we head into the second half of the year.

Perhaps most important from the perspective of investors is what the response of central banks will be? They have already begun to issue more hawkish statements. As long as economic growth and demand for goods and services trend higher the argument for higher interest rates is likely to continue to gain adherents. 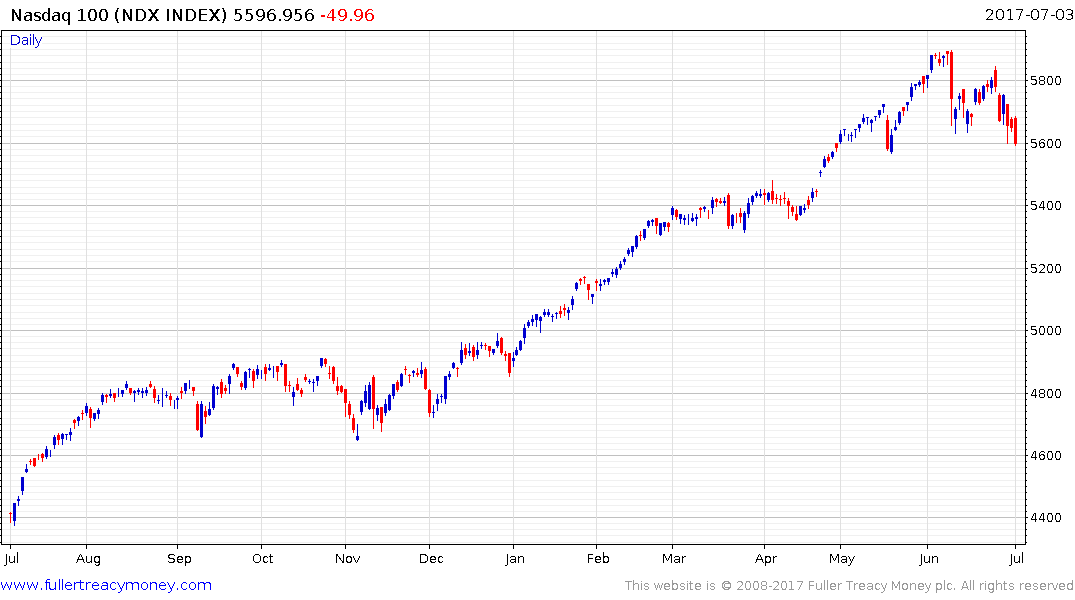 That’s not great news for high momentum shares which have been boosted by access to abundant cheap liquidity. With higher interest rates comes greater competition for liquidity which becomes progressively more expensive. Tesla’s potential for a mean reversion and similar conditions for the so called FAAMG shares are examples of that. 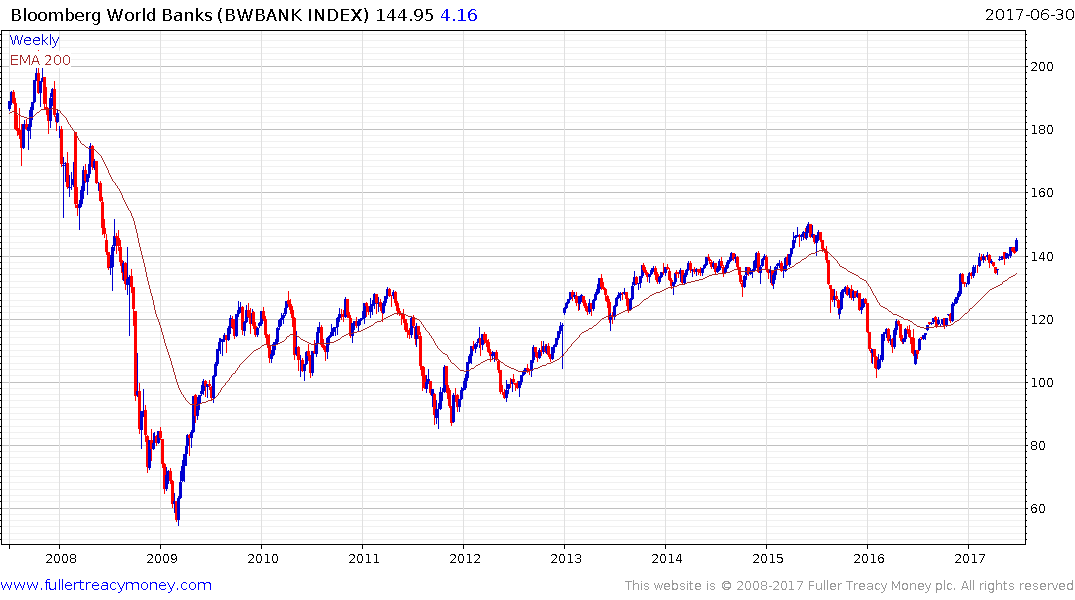 Meanwhile higher interest rates are positive for banks. The Bloomberg World Banks Index which has a true geographic spread has been trending higher since early last year and is now testing the 2015 high. A sustained move below the trend mean would be required to question medium-term scope for additional upside.

An important question is when companies begin to have greater faith in the economic outlook will they deploy available capital into expansion and capital investment rather that financial engineering like buybacks and debt issuance? The PKW Buyback Achievers ETF stopped outperforming in 2015. While it has no doubt benefitted from last week’s surge in bank dividend and buyback announcements, the quantity of new money required to continue to sustain additional upside only grows with higher prices. 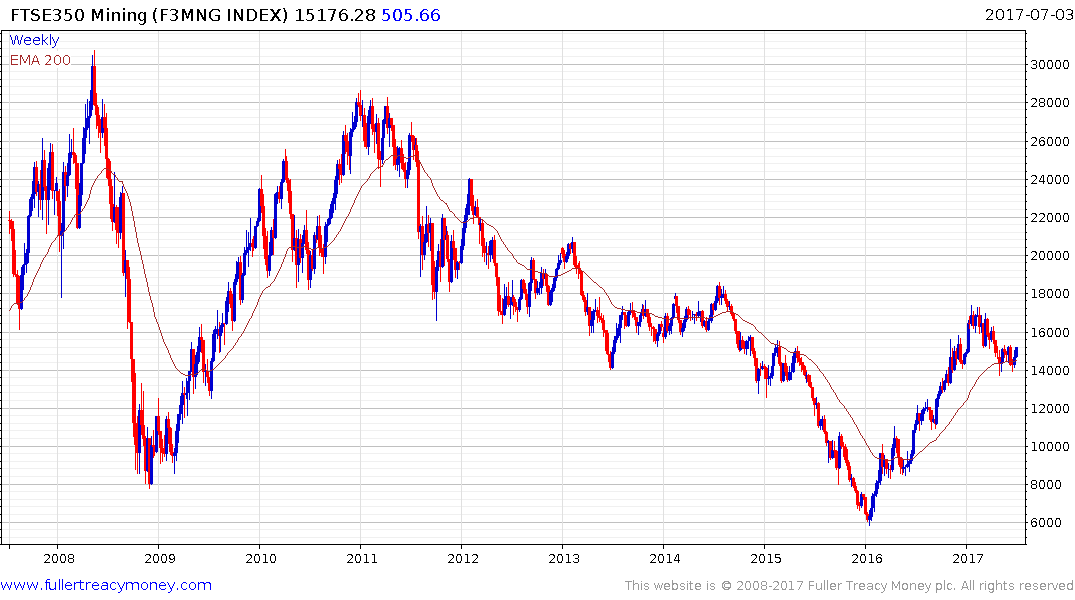 Meanwhile the mining and shipping sectors are heavily leveraged to global growth. The FTSE-350 Mining Index continues to firm from the region of the trend mean and a sustained move below it would be required to question medium-term recovery potential. 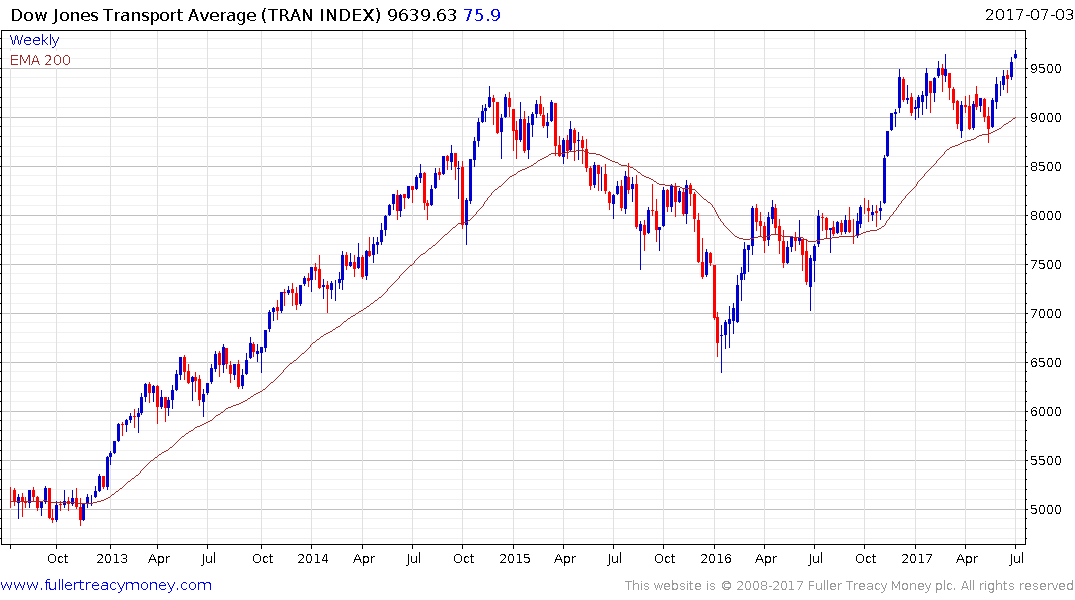 The continued relative strength of the Dow Jones Transportation Average may also be a least partially explained by the same reasons.

Taking a step back and looking at the medium-term, it is about as benign a scenario as one might wish for that growth is picking up globally after what has been a lengthy hiatus. Against that background it is natural for interest rates to rise and cyclical basic resources-type companies to turn to outperformance. The impact that will eventually have on liquidity and particularly after almost a decade of easy money means we should keep an eye on the technology sector because it has been the clearest net beneficiary of low interest rates. Right now a mean reversion is underway and there is little evidence of a more serious pullback that we still need to be alert to signs of tighter liquidity impacting companies and credit. 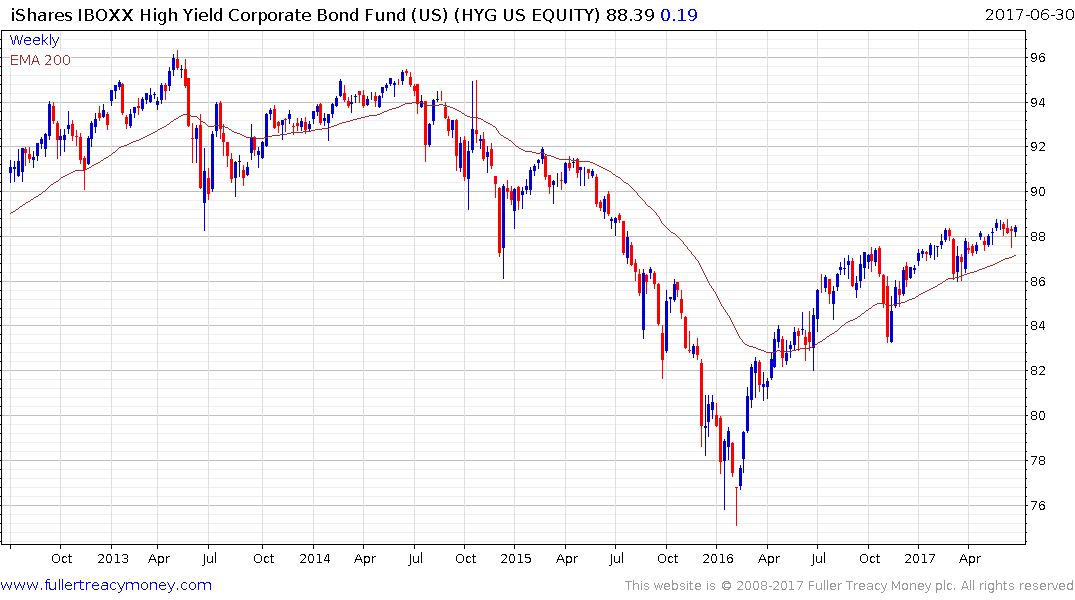 The iShares iBoxx $ High Yield Corporate Bond ETF has lost momentum this year but a sustained move below the trend mean would be required to signal more than temporary resistance in the region of the lower side of the overhead trading range.