Multi-horizon forecast models using statistical analysis have been around for years now, channeling market variables into predictions about how a stock will move over different time periods. The machine-learning techniques introduced in this research will increase the amount of data that can be processed and the potential accuracy of the predictions over longer time periods.

But to make it work, the AI has to be able to process a huge amount of data quickly. The researchers turned to Bristol, England-based Graphcore’s Intelligence Processing Unit, a pizza box-sized chip
designed specifically to handle the demands of an AI program. In the trials, Graphcore’s chip performed about 10-times faster than GPUs.

While the research and the Graphcore chips that make the model possible are the “logical next step” in the high-speed computations that Man Group is interested in, the fund hasn’t committed to rolling it out, Ledford said.

Meanwhile, not every firm would be able to deploy this kind of strategy. “You would not try this model if you did not have access to fast computation,” said Zohren, who worked with Oxford-Man Institute research associate Zihao Zhang on the research.

Traders built some of the fastest telecommunications equipment anywhere, to get prices quickly between New York and Chicago. They pioneered colocation and the transition of exchanges into data centres. It is inevitable they will invest heavily in super computers if they believe they can gain an edge in short-term trading.

Assessing all of the available information faster than anyone else, to make a short-term prediction, makes sense if the only issue is speed of processing. That makes it is a brute force calculation. Money and scale can solve that kind of issue, so large private funds will build big computers. This research implies price movement, over the very short term, is far from a random walk.

This research also gels with the work being done on predicting chaotic systems by researchers at the University of Maryland. Three years ago, they succeeded in predicting the shape of a progressing fire wall. Here is a section from an article at the time:

After training itself on data from the past evolution of the Kuramoto-Sivashinsky equation, the researchers’ reservoir computer could then closely predict how the flamelike system would continue to evolve out to eight “Lyapunov times” into the future, eight times further ahead than previous methods allowed, loosely speaking. The Lyapunov time represents how long it takes for two almost-identical states of a chaotic system to exponentially diverge. As such, it typically sets the horizon of predictability.

In comparison to truly chaotic systems markets are probably easier to predict because there are rules and ways of measuring inputs to the system even if they are very complicated. 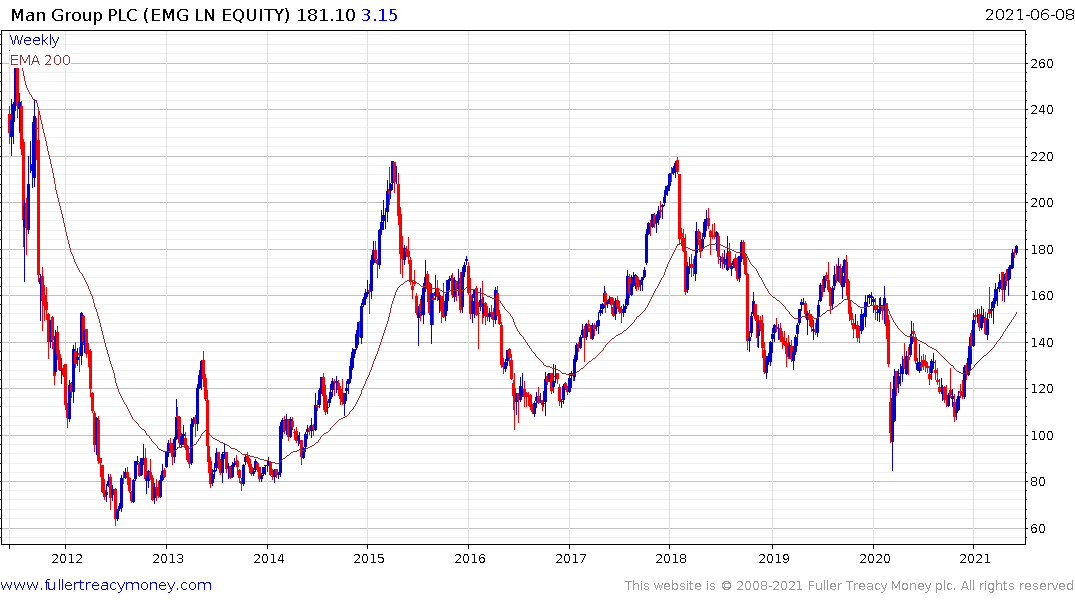 Man Group’s share price has been ranging for most of the last decade and it is currently rebounding back towards the upper side of the long congestion area.