Chinese authorities are attempting to delever their excessive levels of DEBT, which is causing a lack of credit at the short end of the curve, which in turn is driving up the cost of borrowing money at the short end.

This Inverted Yield Curve has been the situation for the majority of the last decade.

The red shaded area shows the times when 3 Month SHIBOR has been above 10 year government yields.

This rise in their cost of debt should be negative for Equities.

Equities (SHCOMP) have indeed broken their uptrend and will remain an avoid until they can regain the 3200 level.

China’s wide divergence between lending and deposit rates as well as the de facto state control of the banking system tend to skew financial conditions so that while an inverted yield curve is an omen of stress in the West, it is apparently less of a factor in China.

The decline in China’s foreign exchange reserves has paced the steady depreciation in the Renminbi and highlights the fact that a good part of the $1 trillion spent was aimed at ensuring the decline is reasonably measured. The modest depreciation of the currency is aimed at helping out the export sector at a time when the materials and infrastructure sector are being pressured. 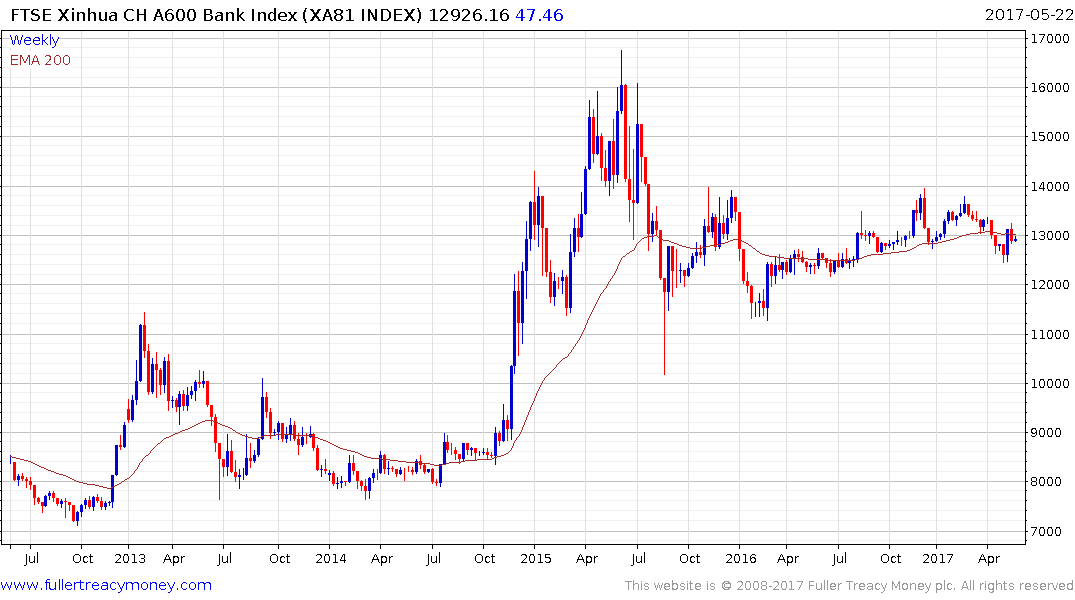 The FTSE/Xinhua A600 China Banks Index has not fallen as much of the wider market and the clear upward dynamic three weeks ago signalled at least short-term support. However the low near 12,400 will need to hold if potential for higher to lateral ranging is to be given the benefit of the doubt.

The problem with using the stock market as a barometer for the Chinese economy at present is that the ranging uptrend evident since early 2016 was in large part engineered to avoid a rout following the botched introduction of equity options trading. The bigger picture is that the government is attempting to rein in leverage that threatens to exacerbate the issue with bad loans while also attempting to boost domestic demand.

Meanwhile the Goldman Sachs China US listed Index has rallied over the last month to test the upper side  of a three-year range and a clear downward dynamic would be required to check potential for a successful upward break.