Macro Digest: Don't put all your eggs in the yield curve control basket just yet
Comment of the Day

Macro Digest: Don't put all your eggs in the yield curve control basket just yet by Eoin Treacy

3. The Fed wants the yield curve to steepen – it is better for credit provision and banks, who borrow short and lend long, and most of the funding for the US government happens is done at 0-3 years, the most important part of the yield curve. The 10-year plus long end is not a major concern as long as the short-end is anchored

4. Chaos at the short-end of the yield curve. The running down of the Treasury’s funds held at the Fed (built up to more than $1.6 trillion during the pandemic emergency) has created dysfunction in the repo market and at the very shortest end of the US yield curve, where rates have dipped below zero at times for the repo. The fault for this lies with the inexperienced New York Fed President Williams, who needs to be replaced. Some believe that the situation can be addressed with a new “Operation Twist” in which the Fed sells some of its shorter maturity holdings to buy at the longer end. But this does the exact same thing as YCC and would set a precedent the Fed won’t want to set. Another fix, a raising of the bank deposit limit would also have two major consequences: the Congress don’t want to "weaken" banks’ balance sheets, and why would Jamie Dimon and other bank CEOs want to be burdened with more US debt if the Fed is going to cap the yields on that debt?

Yes, the troubles in the plumbing at the short-end of the yield curve will trigger some sort of Fed action, but expect a very technical support for the short-end that raises liquidity and the shortest rates away from zero.

If the Fed were to do yield-curve-control YCC, it will be further down the road and likely not extend beyond the 3-year treasury rate, as opposed to market expectations of up to 10Y. The Fed may support the fiscal handover at the margin when we have yet to get to the other side of vaccinations and with unemployment and underemployment at current levels, but they will not entirely throw in the towel on allowing the market the ability to reign in overspending governments.

Of course, one wonders if it is already far too late for the Fed to think this way – given where US budget deficits are headed and the needed treasury issuance to cover those deficits, but at least we need to acknowledge the modus operandi of the Fed.

Economic data is probably going to be loopy for at least another six months. The massive one-time economic contraction in global economic activity has skewed all manner of economic comparisons with past cycles.

Negative oil prices, surging savings and outsized wage growth amid record high unemployment tell us little more than there was a big shock to the system. In five years, these will look like data aberrations, but today we are creeping up on when year over year comparisons will be most affected. Making bold predictions about the output gap or economic potential against that background is fraught with risk. I prefer instead to focus on objective facts. 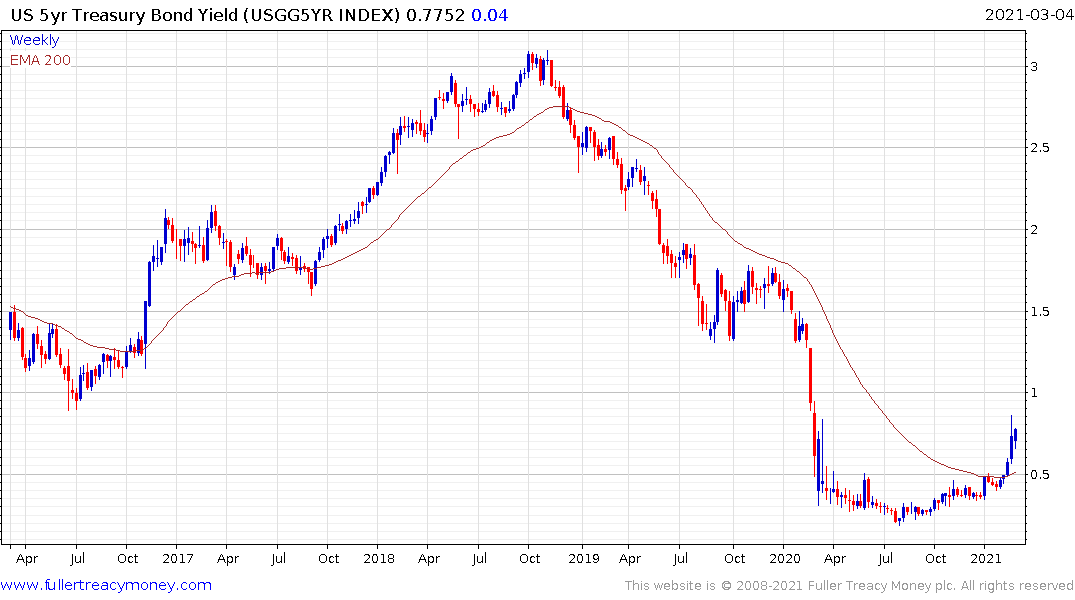 The 5-year Treasury is often used as a barometer for the duration of US government debt. The yield bottomed at 0.18% in July and currently sits at 0.75%. That’s a material increase in the cost of servicing $28 trillion in obligations; particularly with ongoing funding requirements. 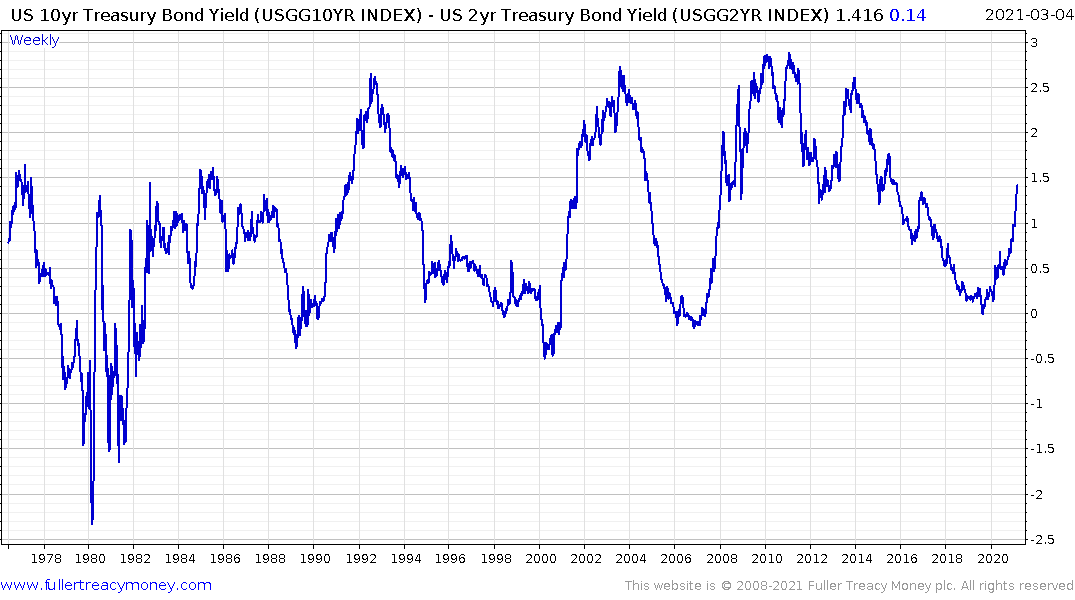 That’s before we think about the additional spending plans currently in the works. I absolutely agree the USA needs to attract investment from anywhere it can get it. Getting the yield curve spread back to the 250 basis point wides of previous cycles is a laudable goal. It represents a massive risk to the tech/growth/innovation/ESG sectors. 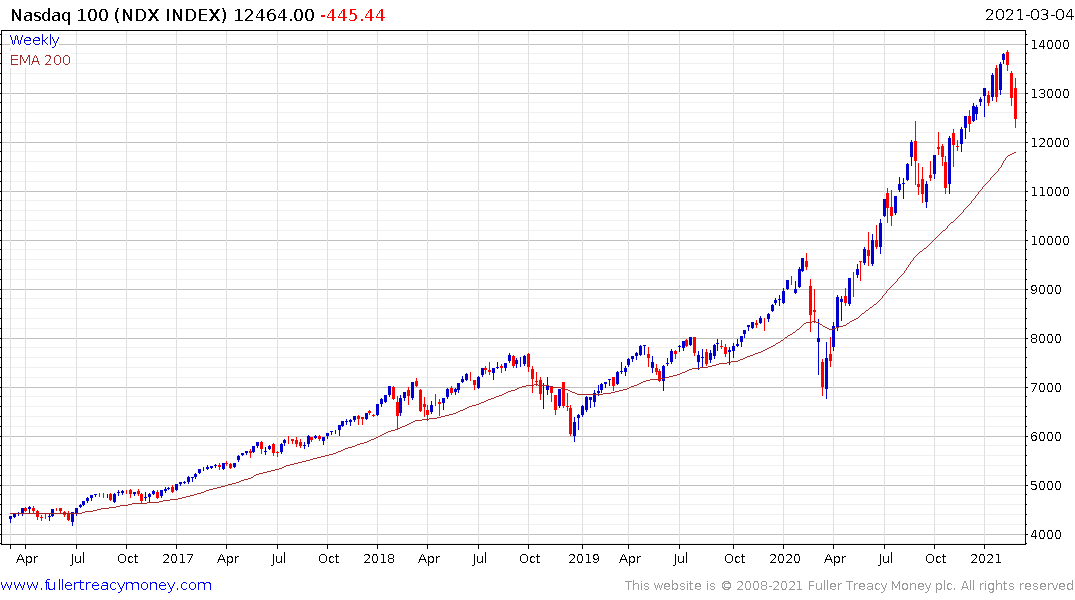 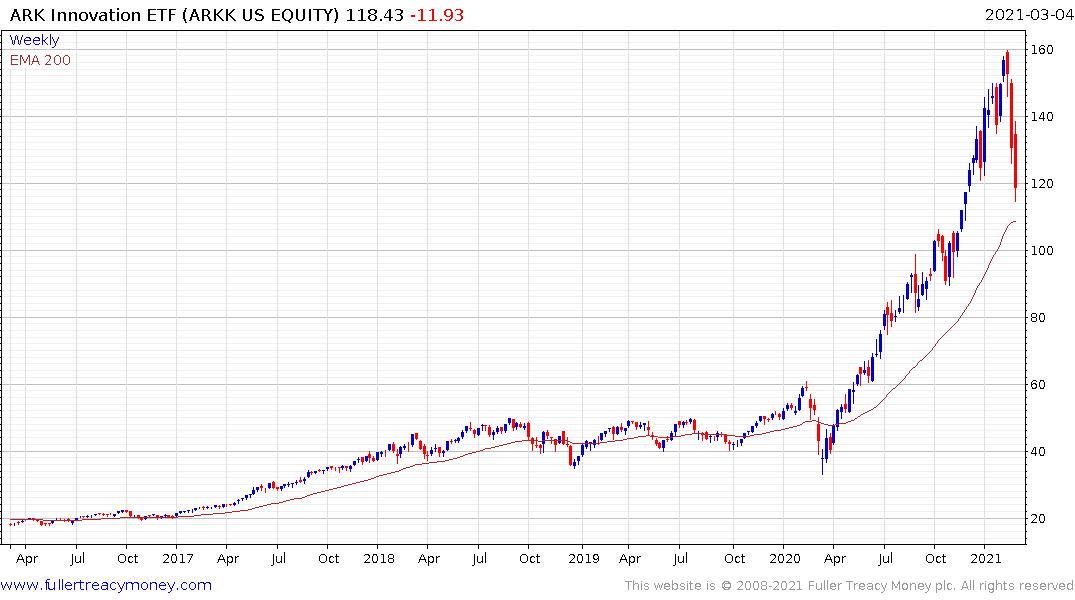 Jay Powell’s refusal to offer support to bond investors today further elucidated the risk in interest rate sensitive sectors. I am very much in the camp that yield curve control is inevitable. With the S&P500 down less than 5% from an all-time peak the Fed has no incentive to act. When it is down 10 or even 20% then we will see how sanguine the Fed is.

Treasuries and the S&P500 now have the same yield. That reverses the substantial advantage stocks had over bonds since last March. This is a natural area where investors in both assets will reassess.

I am also convinced the Fed has a de facto standing repo facility too. The repo on 10-year yields dropped to -4% yesterday. That suggest investors have rolled forward significant short positions.

Since that is the first time the “fail charge” rate (300 basis points below the Fed Funds Rate) has been exceeded, it is evidence of illiquidity creeping into the repo market again. The last time the repo market seized up, the Fed had to supply $450 billion in assistance overnight.

The Value/Growth ratio continues to reverse. Value stocks need a discount rate to create a rational investment case. As yield back up they suddenly regain relevance. At the same time growth stocks come under pressure because introducing a discount rate brings valuations back to reality.

Many investors are caught up in the inflation/deflation question. It’s a red herring. Instead, the argument is about solvency and liquidity. Central banks need inflation and have said in plain English they are going to do whatever it takes to achieve their goals. That means they are not going to raise rates and will supply liquidity when needed. The Dollar is currently unwinding its short-term oversold condition but remains in a medium-term bear market. 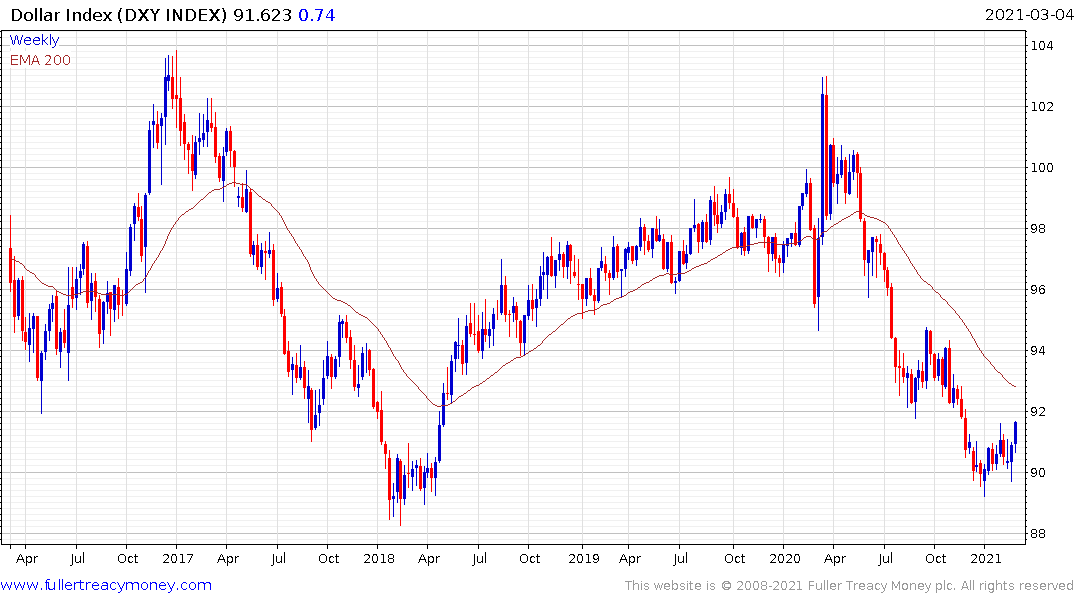 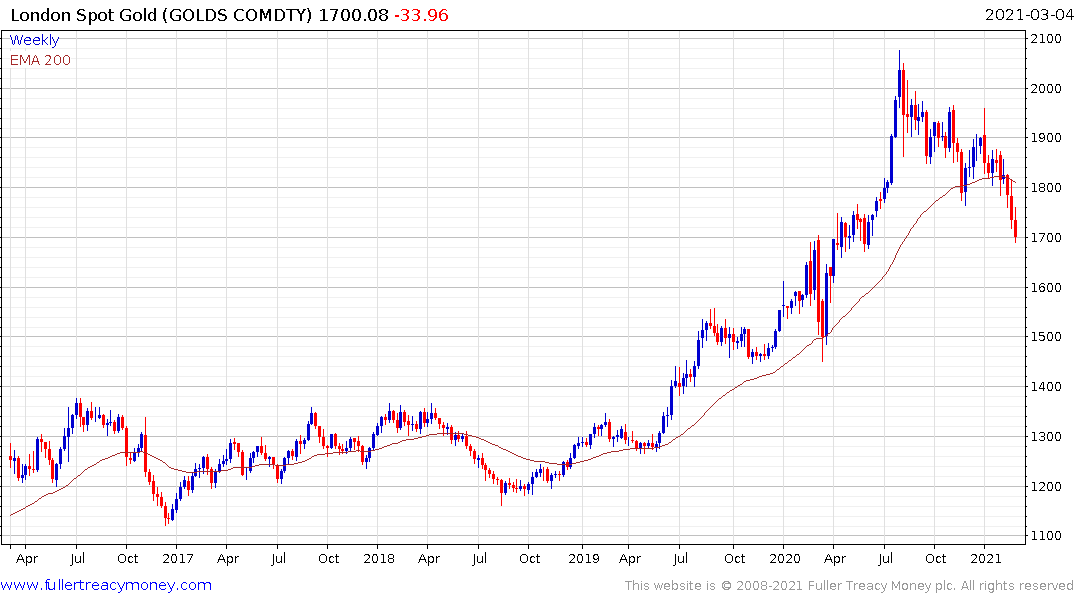 As a result, gold continues to experience selling pressure but it is deeply oversold and sentiment is becoming increasingly bearish. 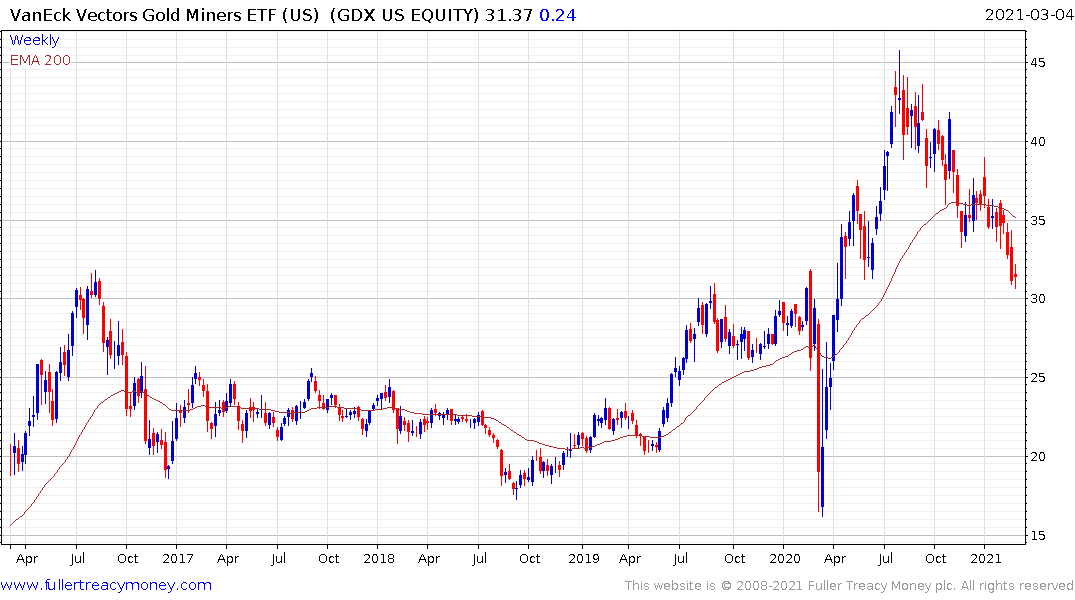 The VanEck Vectors Gold Miners ETF is back testing the upper side of its base formation but will need an upward dynamic to confirm support.