Hermes International, best known for its silk scarves and $10,000 Birkin handbags, is becoming one of the world’s hottest luxury stocks. The shares hit a fresh record on Friday, giving the company a market capitalization of about 130 billion euros ($155 billion) and nudging it above beer giant Anheuser-Busch InBev NV. Hermes, which only joined France’s CAC 40 Index three years ago, has benefited from a boom in demand for luxury goods that showed no sign of abating during lockdowns, while closed bars and restaurants weighed on AB InBev and other brewers.

Hermes’ most popular products are in limited supply by design. That helps to create an aura of exclusivity and keeps demand high. It is also a recipe for low growth as price rises are implemented in an orderly manner against a background of deliberately controlled sales. Why then would the share accelerate?

There are three primary reasons. The first is only the name bags are in limited supply and everything else is produced at greater scale. The second is that massive money supply growth inflates the ability of consumer to afford luxury goods. That suggests the accelerating trend is a product of stimulus and is just as subject to the outlook for global money growth as growth stocks. 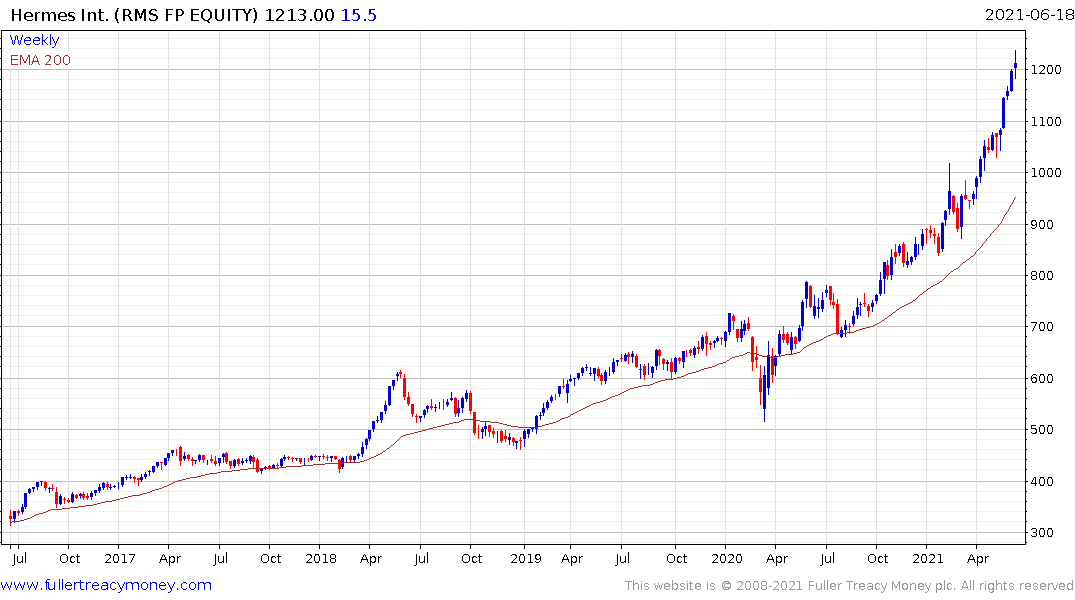 Hermes is a big respectable company with a proven business model that has survived both bull and bear markets and it is now accelerating. That suggests those attributes are increasingly priced in. With a forward P/E of 66, the price assumes everyone will be able to buy a Birkin bag but that is not how the supply inelasticity/exclusivity model functions.

Investors also favour stocks with pricing power when they fear inflation so that has been an additional tailwind. That particular strategy works best when you buy the income producing asset before it accelerates.

The challenge for new traders is that there are plenty of companies that have neither profits nor prospects which are rising much faster. The meme stock bonanza is turning companies that would otherwise be at risk of bankruptcy into the best performing stocks in the market. That’s exactly the kind of contradiction that occurs in the late stages of a bull market, rather than the beginning of a new one. 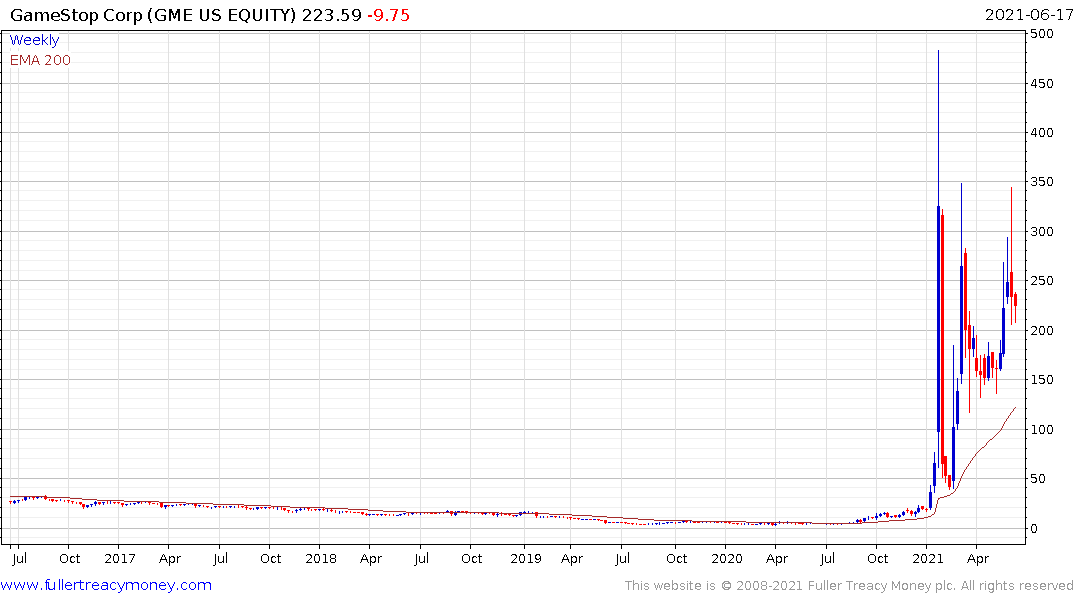 How do we square that with the market environment today where we are coming out of a short sharp recession? It suggests that as a long as rates stay low, and liquidity remains available, the broad trend will remain higher and demand for leverage to exciting ideas will increase. There is no doubt that the meme stocks represent extraordinary risk/reward profiles and are very reliant on liquidity. This article quoting Michael Burry may also be of interest. Here is a section:

“If I put $GME on your radar, and you did well, I’m genuinely happy for you,” he wrote in a tweet in January. “However, what is going on now — there should be legal and regulatory repercussions. This is unnatural, insane, and dangerous.”

During the credit crisis, the drying up of liquidity punctured the balance sheets of banks and they took years to recover. Everything else began to rally from late 2008. Commodities peaked three years later, as the USA began to trend towards balanced budgets which caused the Dollar to rebound.

The monetary and fiscal response to the pandemic has been to rescue everything. CDS spreads are close to the lows of last decade and we have seen an impressive rebound in stocks and valuations. In the last couple of months, I have been clear in stating the Dollar is the lynchpin to the emerging markets/Europe value and recovery proposition. These assets do best in a falling Dollar environment and struggle to attract significant interest without the currency in their favour.

The Fed is only beginning to talk about normalizing policy. It seems likely the market will disabuse them of the notion that it can be achieved without a penalty in the form of stock market volatility. Market commentators are focused on inflationary risks but there is no talk of how much leverage is in the system. 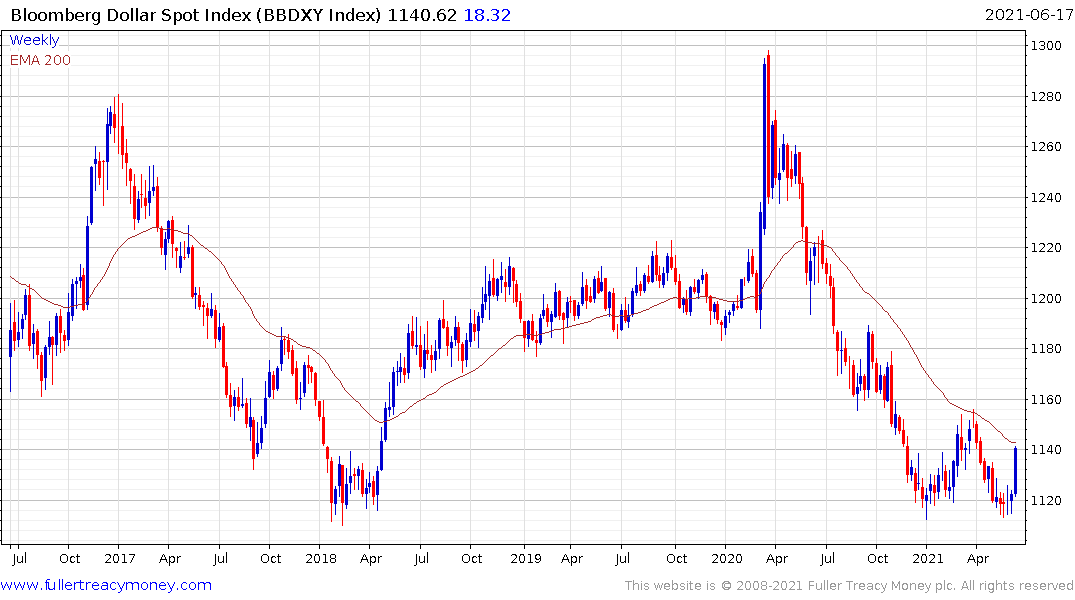 The Dollar rallied in a dynamic manner this week without a big move in bonds or stocks. That suggests demand for cash is rising. Bitcoin continues to pull back from its most recent test of overhead resistance at the 200-day MA, as the Dollar rallies. As anticipated, smaller cryptos, tied to speculation in the decentralsed finance (de-fi) sector are pulling back much quicker. 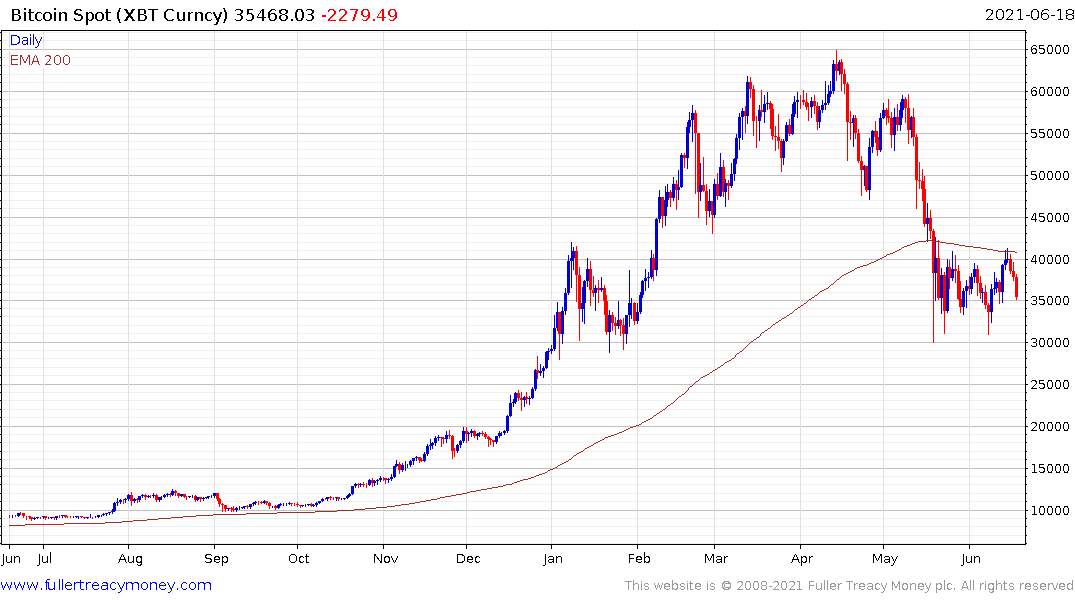 The big question, therefore is how much volatility will be required for Fed officials to re-evaluate.