The London-Shanghai Stock Connect will allow companies from China to sell global depository receipts in the U.K. and enable London-traded firms to list similar securities in Shanghai, according to an LSE presentation seen by Bloomberg News. Starting later this year, the securities issued by Chinese companies will appear on what LSE calls the Shanghai Board. A spokesman for LSE declined to comment.

The London link will be yet another step in China’s financial opening, which began in earnest with a stock connect to Hong Kong in 2014. For the LSE, the move will help the exchange offset a possible decline in activity with Russian companies after the step-up of U.S. sanctions.

“This is a real step in the integration of China’s financial markets,” said Karine Hirn, partner at East Capital Asset Management in Hong Kong. “What’s exciting about this project is that it’s Chinese money going into Western companies.”

200 of China’s mainland listed A-Shares will be added to the MSCI Emerging Markets basket on June 1st. The primary reason they are not already included along with overseas listed Chinese companies is because of issues with buying them. Even with the QFII program it is not a simple matter to buy, or indeed sell, mainland Chinese equities. Since the Chinese administration is intent on controlling capital flows, especially out of the country, dealing in equities is a strictly regulated enterprise. The introduction of depository receipts for the UK and other bourses is a positive step in further opening up the market.

Stock exchanges shares have exhibited some of the clearest commonality of any sector since 2009 as low interest rates, the introduction of high frequency trading and a bull market have stoked demand for global equities. 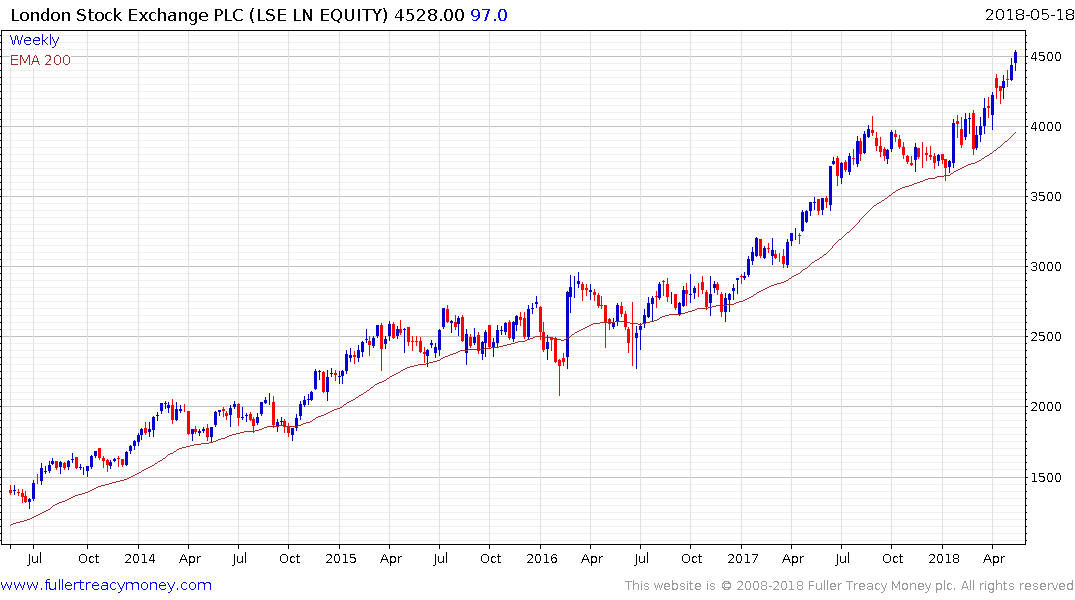 The LSE remains in a medium-term uptrend but is somewhat overextended in the short-term. Meanwhile a sustained move below the trend mean would be required to question medium-term scope for additional upside. 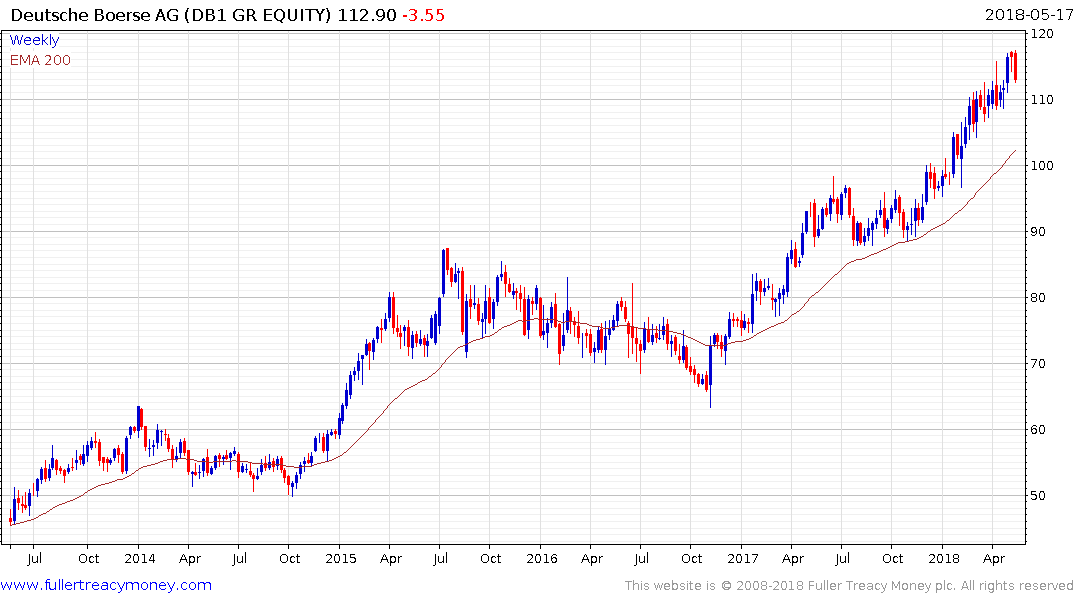 Deutsche Bourse, where Chinese bourses also have an agreement, has pulled back to test the progression of higher reaction lows evident since late October. A sustained move below the trend mean would be required to question medium-term uptrend consistency. 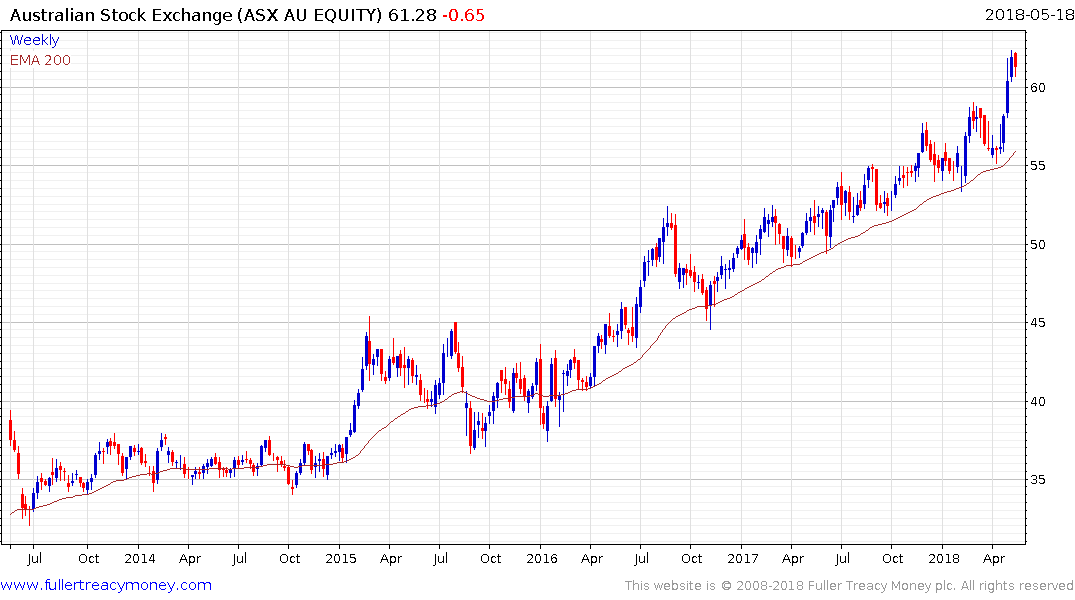 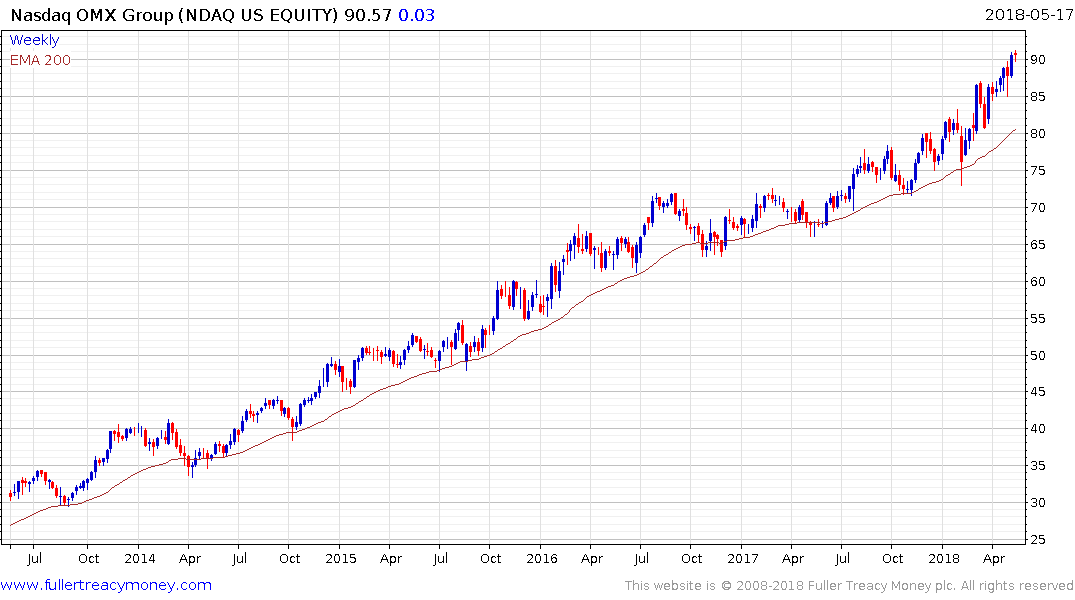 Both the Australian Stock Exchange and the Nasdaq OMX Exchange share a high degree of commonality with the LSE and Deutsche Bourse.