Lifting the mask by Eoin Treacy

One history of the Internet — and I'd argue a rather significant one — is the history of the individual's disempowerment, as governments and businesses both sought to monitor and profit from what had fundamentally been a user-to-user or peer-to-peer relationship. The result was the centralization and consolidation of the Internet — the true y2k tragedy. This tragedy unfolded in stages, a gradual infringement of rights: users had to first be made transparent to their internet service providers, and then they were made transparent to the internet services they used, and finally they were made transparent to one another. The intimate linking of users' online personas with their offline legal identity was an iniquitous squandering of liberty and technology that has resulted in today's atmosphere of accountability for the citizen and impunity for the state. Gone were the days of self-reinvention, imagination, and flexibility, and a new era emerged — a new eternal era — where our pasts were held against us. Forever.

Everything we do now lasts forever... The Internet's synonymizing of digital presence and physical existence ensures fidelity to memory, identitarian consistency, and ideological conformity. Be honest: if one of your opinions provokes the hordes on social media, you're less likely to ditch your account and start a new one than you are to apologize and grovel, or dig in and harden yourself ideologically. Neither of those "solutions" is one that fosters change, or intellectual and emotional growth.

Even the most ardent practitioners of cancel culture — which I've always read as an imperative: Cancel culture! — must admit that cancellation is a form of surveillance borne of the same technological capacities used to oppress the vulnerable by patriachal, racist, and downright unkind governments the world over. The intents and outcomes might be different — cancelled people are not sent to camps — but the modus is the same: a constant monitoring, and a rush to judgment.

Censorship is not something I thought I would ever write about and yet today we are surrounded by it. It is not so much that the law has changed, but that we find ourselves in a position where speaking one’s mind comes with consequences that can stretch into a lifetime. Most people’s default is to play along to get along so self-censorship is an easy answer. That’s a challenge and it is not easily overcome.

The chasm between tribes who believe in the rightness of their opposite positions is a recipe for continued political polarisation. Politicians continue to contort themselves so they can appeal both to the fringe and the core, so they can win elections.

Ultimately, the answer includes spending more and more on crowd pleasing measures. The biggest hangover of the pandemic is that demand for more social programs has risen significantly. Student loan reform/forgiveness is a growing cause celebre in the USA, but higher unemployment benefits and higher wage demands are also on the march.

Meanwhile, the enemies of free speech are thriving in an environment where we censor ourselves from speaking out. We seem to spend more time agonising over the civil rights of extraordinarily small minorities than the deep concerted efforts of Russia and China to overthrow liberal democracy.

After the Fed came out a little more hawkish than anticipated yesterday, the question of how willing central bankers are to endorse modern monetary theory is at least worth considering. I just don’t believe they have the stomach to challenge the political imperative.

There is only so far yields can rise before they start having a material effect on stock market performance. That’s not an issue at present because Treasury yields still have a sequence of lower rally highs despite yesterday’s pop on the upside.

The question I ask myself is whether the yield curve spread expansion is over? 2020 was a very artificial situation and we are going back to normal. Many of the credit market warning signals have been reset and financial conditions are still very liquid. 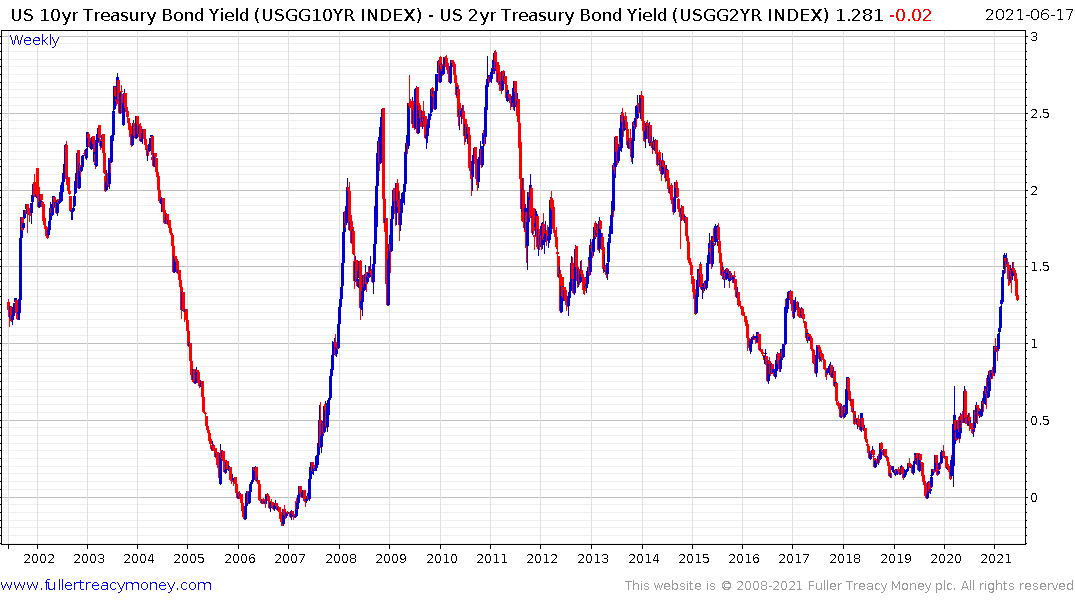 Historically, the spread between the 10-year and 3-month has been very cyclical. The Russian debt default, the Asian financial crisis and failure of Long-Term Capital Management were major causes for concern in the mid-1990s and ensured interest rates stayed lower for longer. That helped propel valuations to extraordinary heights and lengthened the time before the cyclical upswing in the yield curve occurred. If the pandemic was this generation’s late 1990s crisis, the big bubble phase is still in front of us despite near-term scope for some additional consolidation.