Liberty Global to Acquire Cable & Wireless in $5.3 Billion Deal
Comment of the Day

“We have seen Malone build out infrastructure first in Europe to create a distribution platform and now he’s adding content deals. He has both in the U.S. already,” Campling said. “He is repeating the tried-and-trusted approach in Latin America -- build out the distribution platform and then use the economic leverage of the same to drive financial leverage of content negotiations.”

Malone’s growing presence in Latin America also dims the hopes for a revival of talks to combine or swap assets in Europe with Vodafone Group Plc. The two sides in September ended their own negotiations. While Malone has said Vodafone’s assets in Europe would be attractive, he said the two companies had different corporate cultures that would make a combination difficult.

Malone, 74, has taken on mountains of debt in recent years to expand European operations as a plunge in interest rates allowed Liberty Global to borrow cheaply. Analysts predict he will turn his focus to content assets in Europe, such as U.K. television broadcaster and producer ITV Plc, in which Liberty Global owns 9.9 percent.

Liberty Global, which has been seeking growth from broadband subscriptions as streaming and on-demand TV services edge out traditional TV viewing, has also invested in TV-show production and mobile-phone services as new sources of revenue in Europe.

Broadband is viewed by most people today as a necessity. Regardless of whether we consume media via Netflix, Hulu, iTunes, YouTube, Facebook, Twitch or just plain television we need access to a network. There is an increasingly wide divergence between cable and mobile but mobile costs are still too high to represent a significant threat to cable in the short term. Companies controlling broadband network represent utility type cash flows provided they can keep infrastructure development costs under control. 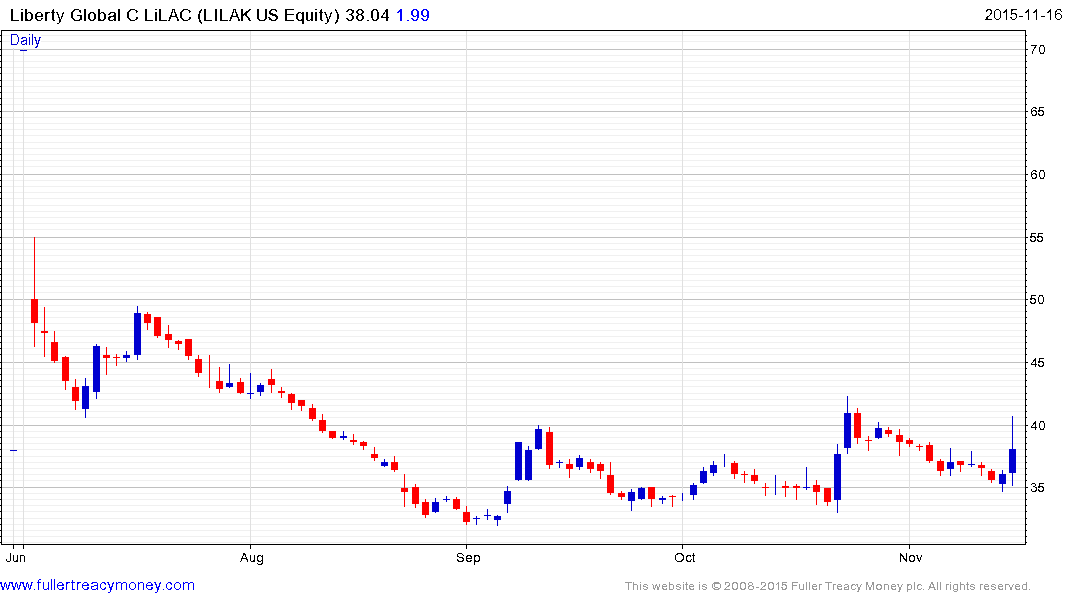 Liberty Global’s LiLAC, (Est P/E 39.6 DY N/A) offering exposure to growth markets in Latin America IPOed a few months ago and has been ranging above $30 since September. Bullish trampolining is evident within the range but a sustained move above $42 will be needed to suggest demand has returned to dominance beyond the short term. 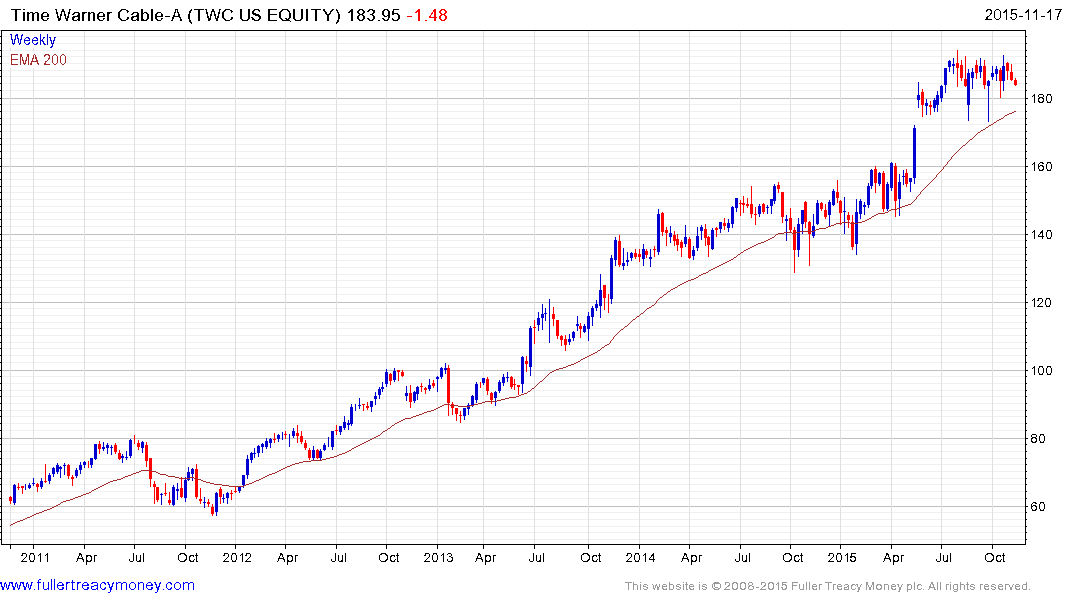 Time Warner Cable (Est P/E 27.73 DY 1.63%) has paused over the last few months in a relatively steady process of mean reversion but will need to hold the $170 area during any pullback if medium-term demand dominance is to continue to be given the benefit of the doubt. 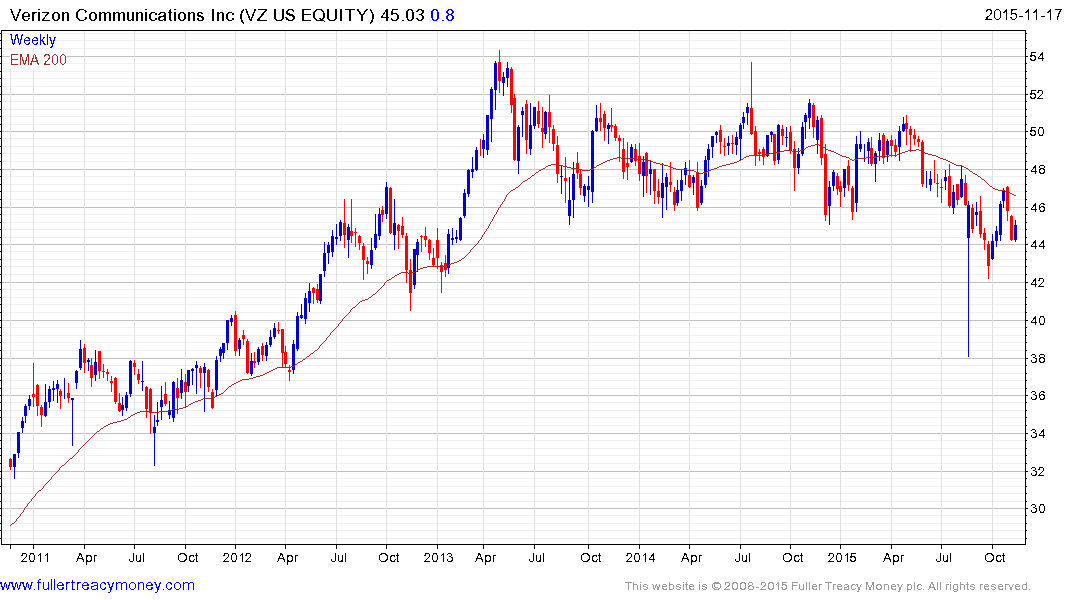 Verizon Communications (Est P/E 11.42, DY 4.99%) dropped down from a two-year range in August but has rebounded over the last couple of months to push back above the $45 area. A sustained move below $42.50 would be required to question potential for continued higher to lateral ranging. 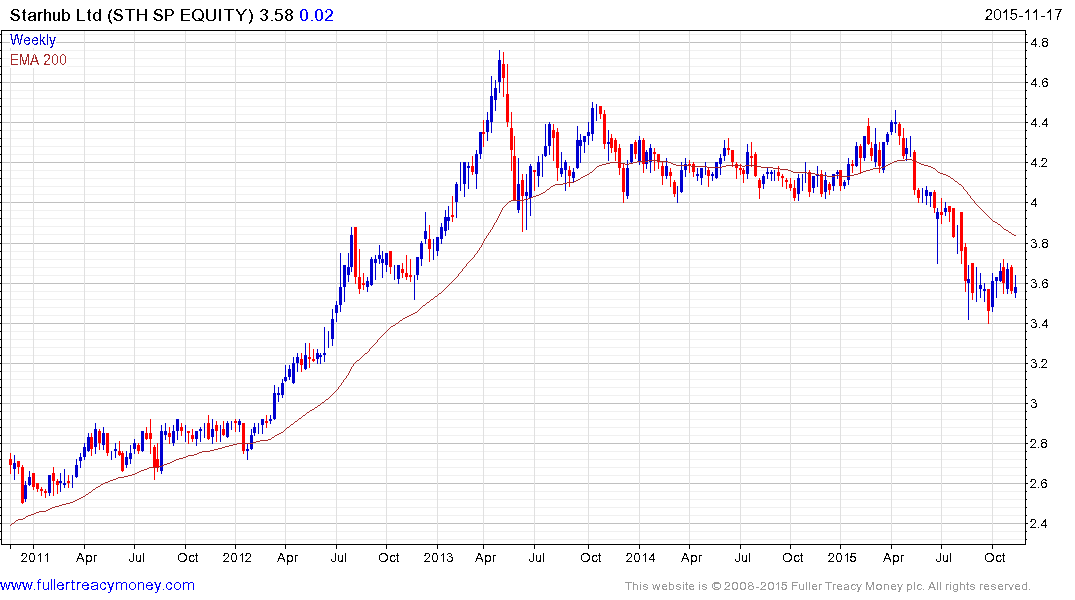 Singapore listed Starhub (Est P/E 16.89, DY 5.59%) also dropped downwards from a lengthy range earlier this year and has stabilised in the region of S$3.50. A sustained move below that level would be required to question scope for a reversionary rally. 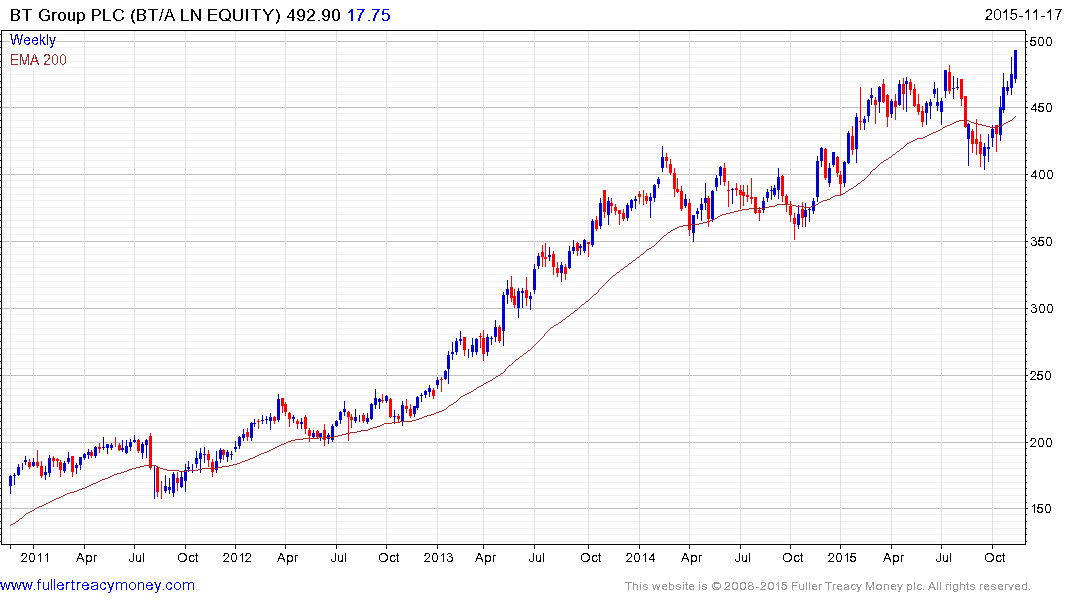 UK listed BT Group (Est P/E 15.95, DY 2.91%) remains in a reasonably consistent uptrend, but is somewhat overbought in the short term following an impressive advance from the September lows. A sustained move below 400p would be required to question medium-term scope for continued higher to lateral ranging.