Let's Buy the US Constitution
Comment of the Day

Let's Buy the US Constitution by Eoin Treacy

DAOs are not a new idea. Vitalik Buterin, Ethereum’s co-founder and unwitting figurehead, contemplated Decentralized Autonomous Organizations in the original Ethereum Whitepaper in 2013. The DAO, a doomed decentralized venture fund, launched and folded in 2016. DAOs have been on fire this year within the web3 community; becoming a DAO is the de facto long-term fate of any sufficiently serious protocol.

In October, a16z led a $10 million round in the popular DAO Friends with Benefits. A couple weeks ago, PleasrDAO bought a 1/1 Wu-Tang album for $4 million. Last week, the Ethereum Name Service (ENS) became a DAO and airdropped $2 billion worth of ENS tokens on anyone who’d bought a .eth domain over the past few years. Many people received $10s of thousands just for being an early adopter.

But despite the early bright spots, most people have never heard of a DAO or bought into web3 yet -- it’s still very early. There’s still a struggle going on between web3’s fans and its skeptics, including many members of the US government. That’s not how it should be. America should be the home of web3, as @punk6529 eloquently laid out here:

I’m sure those of us with a few grey hairs remember 2008 when securitization was a dirty word that was blamed for crashing the global financial system. The reason it created such a problem was it took groups of cashflows, treated them as a whole, they spliced them up into income streams with varying degrees of risk. Then smart people took that structure, leveraged it, and kept on leveraging it until it broke. Banks went bust all over the world and regulators swore it would never happen again. That’s why banks are less than eager to participate in these new ventures.

The creation of the limited company allowed risk to be shared and for value to be effectively securitized. Treasury strips allow individual cashflows to be traded independently from the principal. CLOs allowed groups of loans to be a securitized and that was also applied to mortgages, autos etch. The latest iteration of this trend is to securitise physical assets.

One of only a handful of physical copies of the US Constitution is a big splashy attention-grabbing example. Creating so much fervor around the sale ensures the guide price will be exceeded and possible by multiplies. It’s a good time to be both an auctioneer and the owner of collectibles. 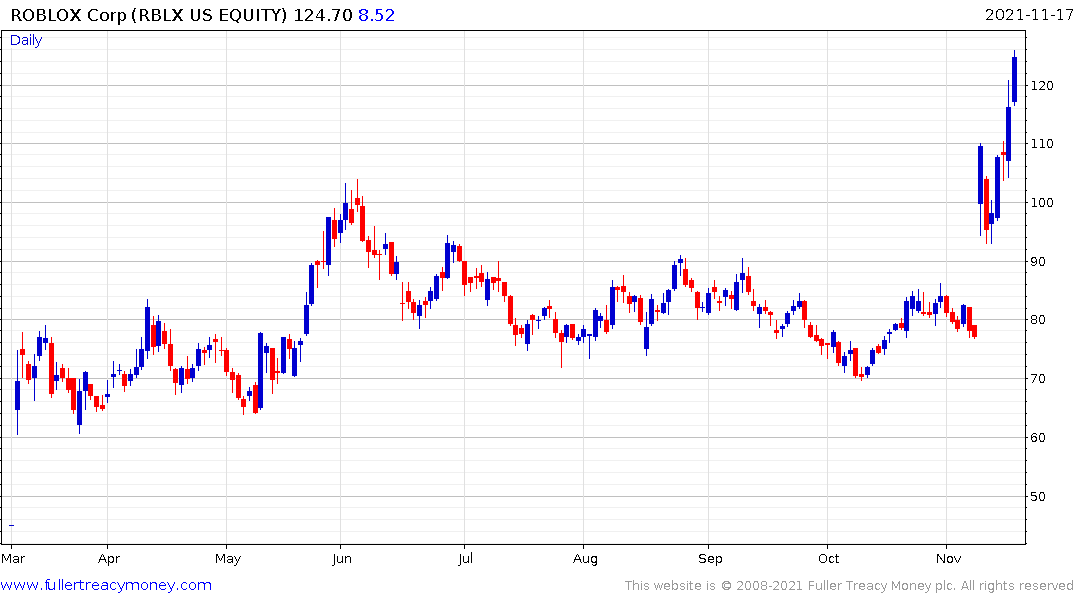 Roblox is a leading beneficiary from the creation of NFTs on its game platform for example.

It also helps to highlight how we are likely to see this market evolve. By the time it eventually crescendos everything will be up for securitization. That’s particularly powerful for big landmark buildings which lack fractional secondary markets. This article from Bloomberg detailing how collectors avoid CGT by splitting ownership of art works is a less developed version of the NFT market.

As a measure of how popular these ideas are, I met someone a few weeks ago who was looking to launch an NFT for a group of historic memorabilia from the Battle of Little Big Horn. The group’s aim is to use the proceeds to build a museum. I don’t think of myself as special. Rather, my conclusion is if I end up having a conversation with someone it is a reflection of what is happening in the wider market environment.

DAO’s (Decentralized autonomous organizations) run in the background but are ruled by majority vote, so more than 50% of the owners would need to make a decision before anything changes. They are being hailed as the true democratic structure but if Switzerland’s practices of having referenda on everything is any guide it is a recipe for incumbent bias.