Leslie and Mark's Old/New Idea
Comment of the Day

There are American political leaders in both parties who talk about having an “all of the above” energy policy, implying that they want to build everything, all at once. But they don’t mean it, at least not really. In this country, we don’t need all of the above—virtually every American has access to electric power. We don’t want it—we have largely stopped building coal as well as nuclear plants, even though we could. And we don’t underwrite it—the public is generally opposed to the government being in the business of energy research, development, and demonstration (aka, RD&D).

In China, when they talk of “all of the above,” they do mean it. With hundreds of millions of Chinese living without electricity and a billion more demanding ever-increasing amounts of power, China is funding, building, and running every power project that they possibly can. This includes the nuclear sector, where they have about 29 big new light water reactors under construction. China is particularly keen on finding non-emitting forms of electricity, both to address climate change and, more urgently for them, to help slow the emissions of the conventional pollutants that are choking their cities in smog and literally killing their citizens.

Since (for better or for worse) China isn’t hung up on safety regulation, and there is zero threat of legal challenge to nuclear projects, plans can be realized much more quickly than in the West. That means that there are not only dozens of light water reactor plants going up in China, but also a lot of work on experimental reactors with advanced nuclear designs—like those being developed by General Atomic and TerraPower.

There are exciting things happening in the nuclear sector at present as technology catches up with the early aspirations of the industry in the decade following World War II. However, while computer modelling and mathematical work is relatively cheap, building test reactors and overcoming the necessary regulatory hurdles is expensive and beyond the scope of the even the best funded start up.

The reality is that with cheap oil and gas the USA just does not have the incentive to drive the next stage of nuclear research. China and India need the technology. The pace with which they are polluting their cities is unsustainable and represents a growing headwind to the development of the services and knowledge based economies that will further their development goals. As a result they have a great incentive to explore any technology that can deliver a semblance of energy independence. 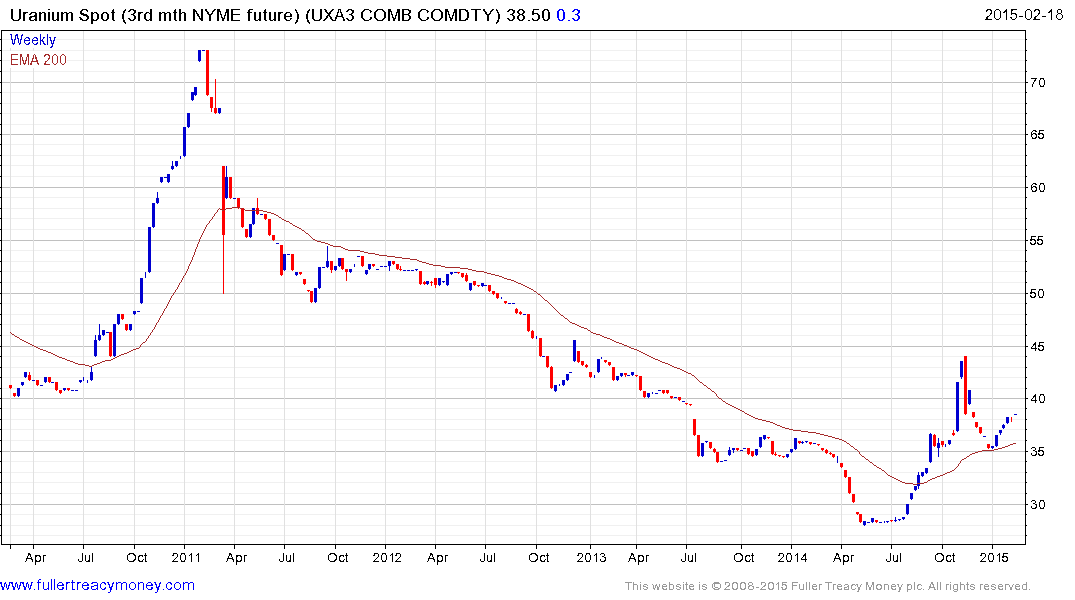 At the present moment continued tensions with Russia have acted as a bullish catalyst for uranium. Following a steep decline in the aftermath of the Fukushima disaster, prices stabilised near $28 in May, rallied to break the three-year progression of lower rally highs by September and found support in the region of the 200-day MA from January. A sustained move below the trend mean would be required to question medium-term scope for additional higher to lateral ranging.

The collapse in oil prices and the knock-on effect for energy shares has done nothing to improve sentiment towards the uranium mining sector despite the fact that 150 new reactors are due to enter service in the next decade.