Laying Down the Groundwork for a Knowledge-Led Society: Policy and Practice by Eoin Treacy

Africa is increasingly becoming a generator of knowledge, innovation, creativity and technology, rather than being solely an adapter of trends produced elsewhere in the world - like it was mostly the case in the past. There is no doubt that this trend must not only be encouraged by African Governments, but it must also be accelerated with the implementation of specific proposed public policies. Why? Because the knowledge and creativity-based development model renders obsolete all other models of development as it has a unique feature that none of the other models does: its entire bedrock rests on bringing self-sufficiency, independence and self-generating mechanisms of well-being gains enshrined in each domestic economy, and that is for the entire African continent. The knowledge-based development model can charter new territory for Africa – a territory where it has never succeeded in going before - a territory where an extremely knowledgeable, creative, skilled and educated young and dynamic African population combined with the implementation of science/evidence-based public policies by African leaders, finally brings societal well-being, that is well-being to every single citizen, on the continent. The knowledge-based development model can do so in two specific ways: 1) it can ensure the continent’s self-sufficiency, independence and self-generating mechanisms of well-being gains for all segments of its population rather than depending on outside help, and 2) it can, once and for all, lift all African countries out of the natural resources curse2 or the Dutch disease or the paradox of the plenty by ushering them into an era where endowment in two new kinds of natural resources – namely knowledge and creativity -- is more closely correlated with societal well-being compared to endowment in oil and other natural resources.

Africa is often considered as a whole but is a continent replete with different languages, cultures and traditions that are as valuable and varied as anywhere else. There are obviously countries that are more successful than others and the record of improving standards of governance is patchy at best. I look forward to a time when any mention of the Africa does not require a preamble.

There is increasing evidence that technology is permeating the infrastructure of an increasing number of cities. If we simply take the uptake of mobile phones as an example then there is ample potential for entrepreneurs to bend technology to the unique requirements of their individual markets.

Additionally there is perhaps no continent that will benefit more from advances in biotechnology where the scourge of malaria could realistically be banished within the next couple of decades. That alone could unleash productive capacity simply by allowing people to work and not be a burden on this families. 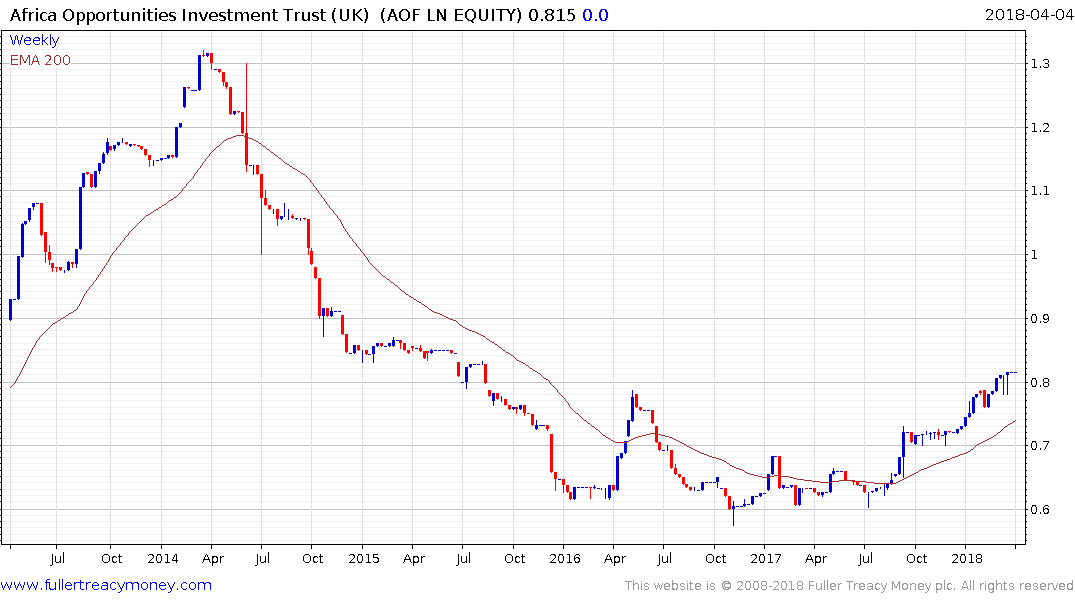 The Africa Opportunities Trust remains on a recovery trajectory and a sustained move below the trend mean would be required to question medium-term scope for additional upside.